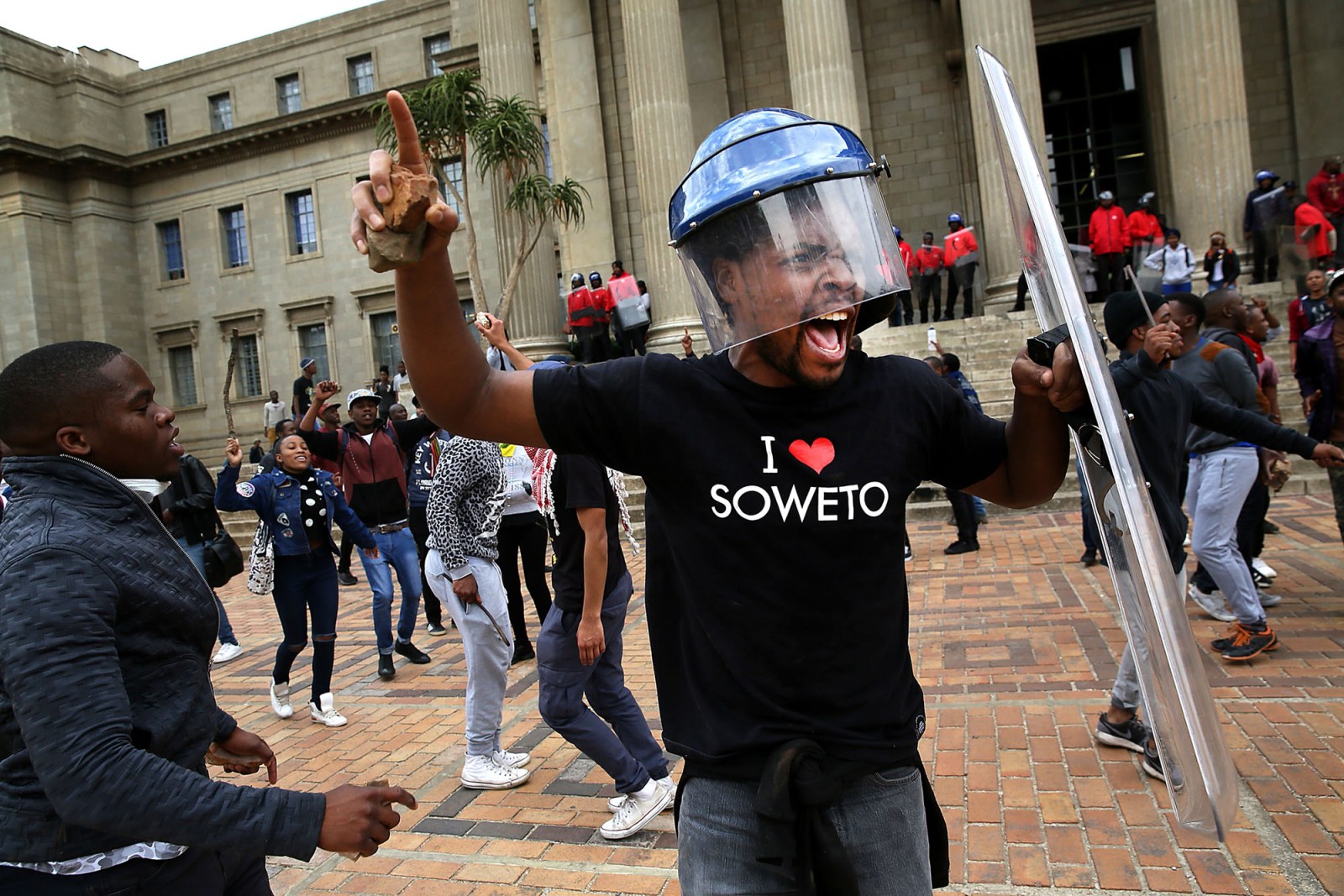 A Wits University student leader, Mcebo Dlamini, confronts police with a rock in his hand outside during the #FeesMustFall protests on 4 October 2016 in Johannesburg. (Photo: Gallo Images / The Times / Alon Skuy)

The protest by Wits University students this week stemmed from the same dynamic that has led to protests at universities during the start of every academic year since at least 1994.

The recent protests outside Wits University and the tensions on other campuses are a reflection both of our troubled past and our turbulent present. This situation mirrors our conflicted society, the inequality and poverty bequeathed to South Africa by apartheid.

However, there has been a litany of cynical political promises, missed opportunities and simple governance and competency mistakes which may have exacerbated the discontent. And Covid-19 has made it all so much more unbearable. Unfortunately, even though the way students are taught is undergoing radical changes, it is unlikely to improve in the near future.

The protest by Wits University students this week stemmed from the same dynamic that has led to protests at universities during the start of every academic year since at least 1994.

It relates to students from poorer families who through their own hard work qualified to enter higher education institutions but cannot afford to pay the fees.

At the same time, the demand for higher education has risen as our demography has changed and the number of young people who qualify through the system has increased. And yet, capacity has not come close to meeting demand.

It is easy to suggest that higher education, universities and students get far more media attention than almost any other sector, relative to how many people it affects. There are probably around 11 million people who are not formally employed, and yet the problems facing a much smaller number of university students are getting much higher levels of visibility and attention.

This is partly a reflection of the fact that most decision-makers and members of the governance and media went on to university or higher education. And students are able to garner media attention through the way they conduct their protests and can speak to cameras, which often cater to English-speaking audiences.

But there is another reason this group gets so much attention.

Many South Africans have aspirations of improving their lives, of ensuring that their children get a qualification to help lift them (and their families along with them) into the middle class. The experience of a deserving student unable to pay their fees may have a strong resonance with them.

For many years after 1994, there was an intense focus on the number of people from different race groups who were accepted to SA’s top medical schools. This was the case even though it was a tiny number of people.

At the core of the discussion were affirmative action and racialised inequality. It interrogated to what extent our society was changing – and that’s what gave the issue such heat.

So, higher education is a reflection both of where our society is now and where we want it to be.

Unfortunately, there has been a series of governance mistakes that may have exacerbated the situation.

The most glaring example of this was the incredibly cynical promise of free higher education, made by then-president Jacob Zuma on the first day of the ANC’s Nasrec conference in 2017.

There had been no warning and no suggestion that he would make such an announcement. Even many of the student groups which had been campaigning for this measure gave it a cautious welcome, seeing it for what it was – a trick by a politician who could soon be in a lot of trouble.

Even though Zuma “lost” at Nasrec, the promise was made, it was in public, and raised expectations.

Higher Education Minister Blade Nzimande said this week that Zuma’s promise had created problems for the National Student Financial Aid Scheme (NSFAS) and that it “undermined a commission” that was examining the issue.

Then there is the situation at Unisa, one of the world’s oldest and biggest distance learning universities.

Over the last year, there have been intense discussions about the nature of teaching and whether online and distance education are as effective as face-to-face education. Some believe it could change the world and allow many people to receive an education using fewer resources, while many others disagree sharply.

In May last year, Nzimande confirmed that he believed this kind of education would be the future. It makes sense to educate as many people as possible, and higher education can be done in this way and have much greater capacity for students.

However, earlier this year Nzimande announced that Unisa had been told to cut its intake of first-year students by 20,000.

In other words, despite the lessons of 2020, the institution with the greatest capacity for distance education had been told to take fewer students.

This appears to be the wrong decision at the wrong time.

On Thursday evening it emerged that a legal challenge to this decision had been successful and it had been overturned.

But the higher education department says that Unisa had been told repeatedly, from 2018 onwards, to reduce the number of first-year students it takes in, because otherwise it will draw too many resources from the system. If Unisa did not do so, the department says, other institutions would lose out and the entire system would be disrupted.

Some may feel this to have been a missed opportunity, that perhaps the lockdown period could have been used to rethink the entire higher education system. To be fair, almost everyone in the system was probably simply trying to keep education going and may not have had the time or the energy (or even the health… this is a pandemic) to even attempt to fix the longer-term problems.

This is related to another governance failure.

The upshot of this is that there will now be further delays in providing cheap high-speed mobile internet across much of South Africa. For technical reasons involving the fact that digital terrestrial television has yet to be implemented, it is the rural areas that will be most affected.

And the main reason that this has not happened has been the intense infighting in the ANC over what is called the “set-top box” debate. Essentially, the then communications minister Faith Muthambi refused to implement the policy the ANC had adopted on the issue.

The consequences of this delay are huge. It means that, because the cost is so high, people who might have been able to study through online learning in much of SA cannot do so.

(Muthambi is, shockingly, and yet not surprisingly, still deployed by the ANC in Parliament, as chair of the Portfolio Committee on Cooperative Governance and Traditional Affairs. She is charged with ensuring that local government is not corrupt. Yes, really.)

The impact of this is that the pressure on the higher education system will continue to grow. The option of getting a qualification through distance learning is so much harder than it should be because of these two governance problems. And there is no quick way to increase capacity in bricks and mortar institutions.

This means that what has become a tradition, students protesting at the start of the year, will continue for many years to come. DM