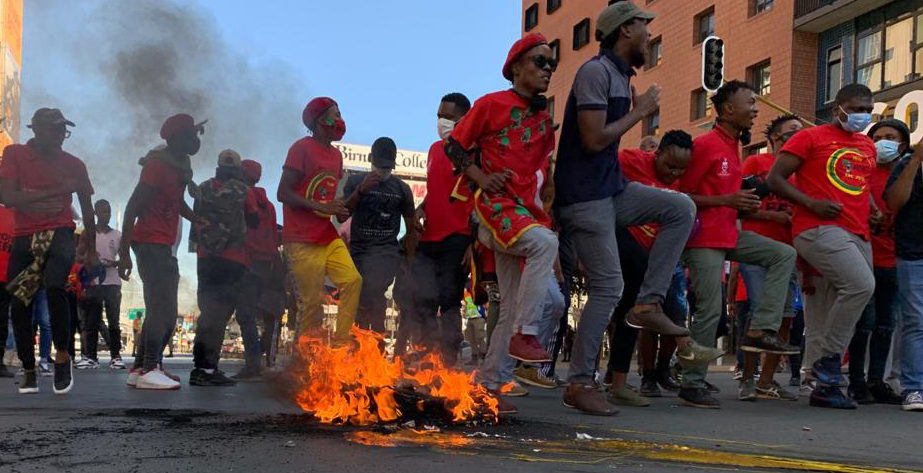 Appealing for calm on Thursday, Higher Education Minister Blade Nzimande updated the public about the student funding crisis, a day after bystander Mthokozisi Ntumba was killed, allegedly at the hands of the police, during a Wits University student funding protest. As he spoke, students from other campuses were mobilising in solidarity.

On Thursday, Minister of Higher Education, Science and Innovation Blade Nzimande outlined plans for additional funding for students in higher education. This comes amid widespread outrage over the death of 35-year-old Mthokozisi Ntumba, who was killed when police opened fire on unarmed students protesting at Wits University on Wednesday. The police allegedly opened fire and Ntumba was hit as he came out of a nearby healthcare facility.

During a post-Cabinet briefing, Nzimande expressed his condolences to Ntumba’s family, friends and colleagues.“I have directed that the Wits University Council, the Wits Management and… relevant law enforcement authorities provide us with an explanation on what caused this tragedy, and to take whatever steps to ensure justice is done and appropriate responsibility is accorded.”

“The Independent Police Investigative Directorate [IPID] is already conducting an investigation to determine the circumstances that led to the death,” said Acting Minister in the Presidency, Khumbudzo Ntshavheni, who joined Nzimande for the briefing. “Cabinet urges the police to exercise restraint whilst ensuring public order during protests and never to use live ammunition” she said.

According to EWN, a caller to 702 described Ntumba as a breadwinner for his family. Police Minister Bheki Cele visited Ntumba’s family in Kempton Park on Thursday morning. He later told broadcast station Newsroom Afrika that President Cyril Ramaphosa also wanted to discuss the shooting with him.

The killing of Ntumba has sparked outrage across the country, with growing calls for the arrest and prosecution of the officers involved.

[JUST IN] Police Minister Bheki Cele confirms to @XoliMngambi that President Cyril Ramaphosa called him last night to discuss the shooting of 35 year-old Mthokozisi Ntumba who was killed, allegedly by police, in Braamfontein on Wednesday during the #Witsprotests.#BhekiCeleOn405

Nzimande said Cabinet met on Wednesday to discuss the funding shortfall at the National Student Financial Scheme (NSFAS) which resulted in the protests at Wits and smaller campuses. At Wits, historical debt among 8,000 students stands at more than R1-billion.

The dissent has been described as reminiscent of the 2015 student-led #FeesMustFall protests across universities in South Africa.

Nzimande said Cabinet agreed that funding should be reprioritised from the Budget “in order to ensure that all deserving NSFAS-qualifying students are able to receive funding support for the 2021 academic year”.

The decision to reprioritise funding had been made in the context of funding cuts and the effects of the Covid-19 pandemic. Nzimande said NSFAS would be able to release decisions on funding, and registrations could continue as planned.

“No NSFAS-qualifying students have been affected by these delays, as universities had agreed to extend the registration period to ensure that students without funding decisions would not be prevented from accessing a place that they qualify for,” he said.

Cabinet had also agreed that a “comprehensive review of the student funding policy of the government is urgently required”. The department had been instructed to immediately start on this and would report back to Cabinet.

“The purpose of this process will be to look carefully at the funding requirements to support students in financial need in the post-school education and training system, to model the holistic requirements of students, including those from poor and working-class backgrounds as well as the missing middle,” said Nzimande.

According to the minister, NSFAS would now be able to release funds for new students who qualify for bursary support. “Continuing students who meet the qualifying criteria have already been allowed to register,” said Nzimande, who described the process as “extremely urgent” since some universities have already started their academic programmes.

The minister also appealed to institutions and NSFAS to ensure the process is completed as smoothly as possible.

“I would also like to appeal for calm at our institutions of higher learning… where there are matters of dispute and grievances, structures are in place for SRCs and institutional management to engage on, and I urge that student leaders and institutional leaders make use of these mechanisms to resolve problems amicably.” Nzimande added: “We cannot afford at this time to endure disruption to the 2021 academic year, which is already starting later than usual due to the extended 2020 academic year and the delayed NSC examinations.”

Campuses across the country

On Thursday, SRCs from other higher education institutions around the country joined the protests, which are trending on Twitter under the #Witsasinamali and #FeesMustFall2021 hashtags. Students from the University of Pretoria SRC marched to the Department of Higher Education in Pretoria on Thursday morning, in solidarity with students facing financial exclusion.

We have arrived at the Department of Higher Education https://t.co/zUjhhtIaiM

The SRC from the University of Cape Town listed demands on Twitter, including:

A “mass meeting” would take place at 4pm on Thursday “to address the state of the university”.

Our demands are simple —

• All students must be allowed to register. This is useless without debt clearance. Student debt must be cleared.
• NSFAS issues must be resolved expeditiously. UCT Council must pressure Government to fund all students.
• Blade Nzimande must resign.

At Wits,  students, joined by several trade unions and organisations, gathered outside Luthuli House in Johannesburg on Thursday to hand over a memorandum of demand. The memorandum, issued by the Wits SRC, was distributed on social media platforms. Among other things, it says that “without compromise, our stance as the SRC remains; we demand that all students should be permitted to register for the 2021 academic year”.

Other demands include no student must be financially excluded in 2021; no fee increments; and a postponement of the start of the academic year to 30 March.

#Witsasinamali | Some of the demands from the memorandum includes:

1. No student must be financially excluded in 2021
2. No fee increment for 2021. KT #VOWFMNews #WitsProtests pic.twitter.com/RlpHEF819s

Wits SRC president Mpendulo Mfeka said more than 6,000 students are excluded from the current academic year and the protests will continue and there would be no going back until their demands are met.

They held hands and danced as they marched through the streets.  Placards bore demands such as “Education for all”.

The students say they won’t participate in this year’s academic calendar until everyone has access to free education.

“Youth, students from all walks of life, across institutions and across political badges – let us unite and shut this country down until. There must be no academic activity on any campus in the country, online or physical until all our students register,” Bonga Makhanya, one of the Wits students said on Twitter.

A parent, Pfumi Ndala, said she was at the protest to support her children and other students because they deserve access to education.

Police were patrolling the streets and directing traffic around Braamfontein.

Across the country, the start of the academic year was delayed in 2021 owing to the pandemic, with a number of problems simmering in the build-up, including university admission exclusions, non-delivery of laptops and issues of blended learning during Covid-19.

Meanwhile, IPID confirmed to Daily Maverick that Ntumba had been shot when he left a doctor’s office. National spokesperson Ndileka Cola said on Thursday that IPID “managed to collect numerous witness statements” and “confiscate firearms”. An autopsy would be conducted this week and the family liaison had begun. DM