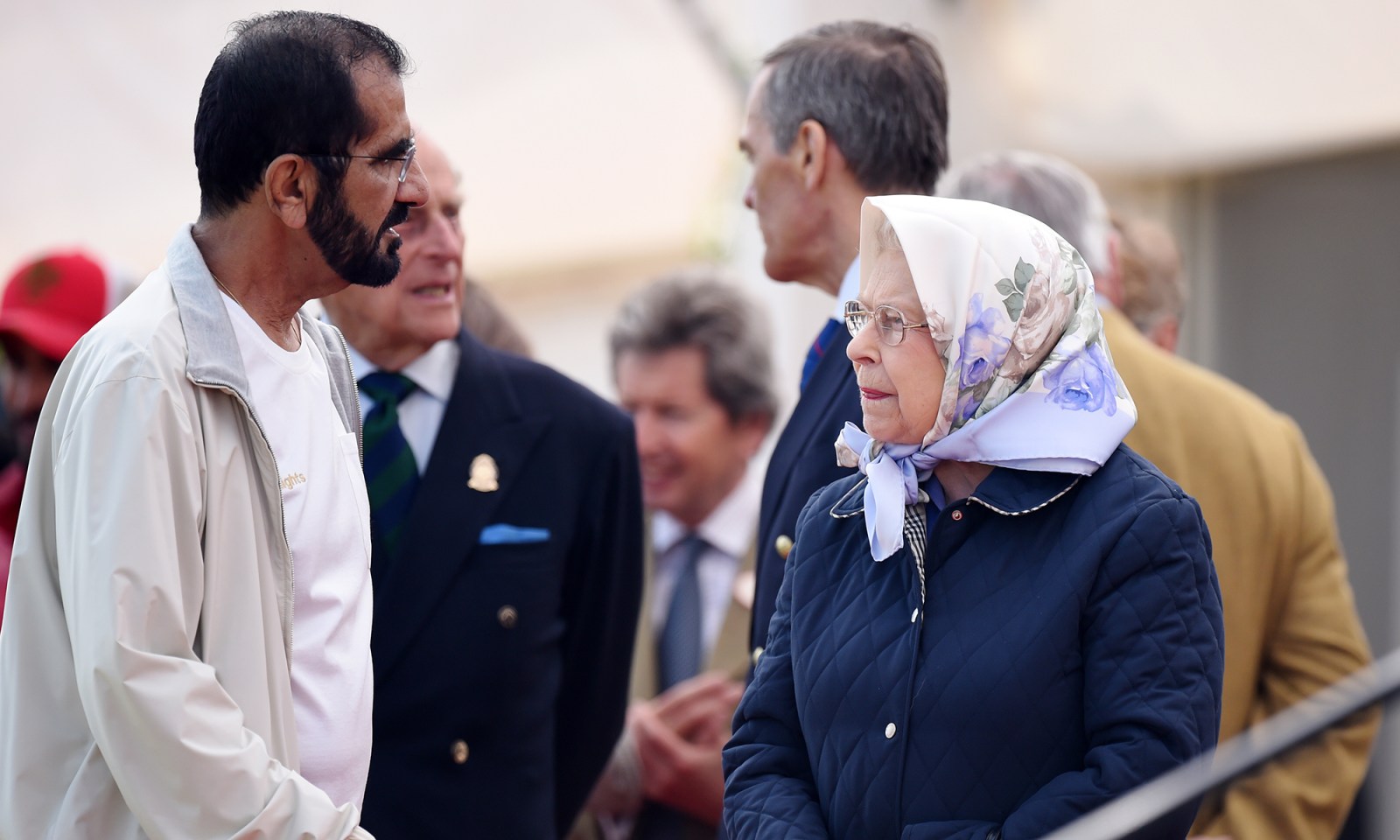 The Queen of England’s friend, Sheikh Mohammed — the repressive, billionaire ruler of Dubai who is holding his daughters, Latifa and Shamsa, hostage — has been allowed by the UK authorities to become the kingpin of Britain’s massive, world-renowned horse racing industry. For how much longer can that industry remain silent on its benefactor’s crimes?

To those who follow British horse racing, the royal blue colours of Dubai’s ruler, Sheikh Mohammed bin Rashid Al Maktoum and his Godolphin racing empire are as synonymous with the sport as Frankie Dettori, oversized hats and diminutive jockeys.

What is becoming notable outside the sport is its silence on the growing evidence of the malevolent activities of racing’s kingpin.

Following his first taste of success as a 27-year-old racecourse owner at Brighton in June 1977, Sheikh Mohammed has poured billions of pounds into the sport. In Newmarket in eastern England — the ancestral home of thoroughbred horse racing — he has, since the 1980s, bought a dozen studs and tens of thousands of acres.

The two training yards that fly the banner for his Godolphin racing team boast private gallops along with equine spas and swimming pools amongst the five-star accommodation for training 300 of his horses. His now global racing operation and Darley Stud breeding setup is the largest in the world.

Describing the Emirati royal as a lynchpin or cornerstone of British racing is an understatement. Such is Sheikh Mohammed’s power, influence and importance that no one in the sport would risk speaking out against him. But those involved in British racing say the sheikh’s role cannot be overstated.

As one former racing official put it: “Without him, Britain wouldn’t have a racing industry.”

With an annual expenditure of more than £3.5-billion, British racing employs more than 17,400 full-time staff. But the sport or its governing body, the British Horseracing Authority, barely dares to mention the controversies surrounding its greatest patron.

“You don’t bite the hand that feeds you, said one racing insider.

In recent weeks, attention has once again been drawn to the sheikh’s treatment of his family after the release of videos from one of his daughters, Latifa. The 35-year-old was abducted while trying to escape from Dubai in 2018.

In the videos recorded by her, she claims she is being held hostage. But since then, the United Nations Human Rights Office has not yet received the evidence it asked for that Latifa is still alive.

Latifa’s disappearance followed that of her elder sibling Shamsa. In 2000, the sheikh’s henchmen kidnapped then 18-year-old Shamsa from the streets of Cambridge after she’d fled the family home in Surrey. She has not been seen in public since.

Wars in Libya and Yemen

The human rights Sheikh Mohammed is accused of violating do not stop at the kidnap and torture of his own offspring. Not only is he the United Arab Emirates’ prime minister and vice-president, Sheikh Mohammed is also the UAE’s Minister of Defence. Over the last 10 years he has presided over a significant expansion of militarised foreign policy.

Most recently, UAE forces have been involved in the wars in Libya and Yemen, in addition to creating and funding tens of thousands of militiamen in both conflicts. In Libya, the UAE has directly supported Khalifa Haftar in his fight against the UN-supported government.

Methods deployed in the UAE-run network of secret prisons across southern Yemen included tying detainees to spits and turning them through a circle of fire.

In pursuit of political Islamists — seen as an existential threat to the Emirates’ ruling monarchs — the UAE also employed assassins to kill members of the Yemeni political party, Islah, despite being on the same side as the UAE in the war against Yemen’s Houthi fighters. In Libya, reports of UAE-hired mercenaries included British nationals among them.

In February 2020, a British high court civil case — brought by Sheikh Mohammed’s estranged wife, Princess Haya of Jordan — found that he had orchestrated the abduction, forced return and torture of two of his children, Shamsa and Latifa. The fact-finding judgment found Sheikh Mohammed had waged a campaign of intimidation.

In 2009, the British Horseracing Association (BHA) rolled out new suitability criteria for the registration and licensing of jockeys, trainers and new racehorse owners.

The revamped “fit and proper” rules laid out criteria to assess a person’s “honesty and integrity” including where the applicant has been “the subject of any adverse finding by a judge in any civil proceedings… been charged in connection with any alleged criminal offence or is aware of circumstances which may lead to his/her being so charged”.

The rules also state that “particular consideration will be given to offences of dishonesty, fraud and those relating to sexual conduct, violence, animal welfare and health and safety”.

When the new rules were introduced over a decade ago, the BHA’s head of compliance stated that “if we are given information that an existing owner doesn’t meet the criteria, we must have the ability and the powers to conduct that assessment and make the necessary changes”.

The BHA failed to respond to Declassified’s questions related to Sheikh Mohammed’s conduct under the relevant rules of racing, including whether the BHA had plans to reassess Sheikh Mohammed’s suitability as an owner.

Last weekend, the BHA’s chief executive, Julie Harrington, told the Racing Post that the BHA is “concerned” about the video footage from Princess Latifa. She added that the BHA has been speaking to Prime Minister Boris Johnson’s government but would not say whether the organisation plans to take action.

The Racing Post, horse racing’s paper of record and only trade newspaper, has yet to report on the 2020 court findings. It was founded by Sheikh Mohammed in the 1980s. Although sold on, he retains ownership of the name.

Horse racing paved the way for Sheikh Mohammed into the British establishment, a path that started more than 40 years ago. In the 1970s, old Harrovian and World War Two veteran Colonel Dick Warden met the sheikh while accompanying horses being shipped from Ireland to the Dubai police force.

The colonel, who held roles as bloodstock agent as well as MI5 agent, went on to become Sheikh Mohammed’s special adviser and racing manager, advising him on land and equine purchases while facilitating his smooth passage into racing high society.

The common interest in thoroughbred breeding and racing also provided an opportunity to build a relationship with the British royal family that other rulers and monarchs would never be afforded.

Sheikh Mohammed has taken the coveted seat in the Queen’s carriage as her guest of honour at Royal Ascot races, processing with the Queen and the Duke of Edinburgh from Windsor Castle down the green turf of the straight mile that runs in front of a ceremonial guard while being applauded by grandstand ticket holders.

Sheikh Mohammed’s portfolio expanded over the decades, from the purchase of 63,000 acres of Scottish countryside in Wester Ross to commercial interests. In the mid-1980s he founded Emirates Airline, now the world’s third largest, which has its logo emblazoned across Arsenal football shirts.

Other purchases include London’s Carlton Tower Hotel in 2001 that falls under the ownership of Dubai Holding (Sheikh Mohammed is the major shareholder), and P&O Ferries in 2019. Dubai Ports World (also founded by Sheikh Mohammed) opened a deep-sea container port, London Gateway, on the Thames in 2013.

Yet it is British racing, more than any other soft-power pursuit, that has white-washed Sheikh Mohammed bin Rashid Al Maktoum’s reputation. The summer sunshine gleaming off the black silk top hats at Royal Ascot continue to gloss over the criminal history of the sport’s master.

The silence of British horse racing has ensured Sheikh Mohammed’s unassailability. “Until he kidnaps the Queen, he’s untouchable,” quipped one Newmarket trainer. DM

Iona Craig is a freelance journalist whose work focuses on Yemen and the Arabian Peninsula. Before becoming a journalist she was a licensed racehorse trainer in the UK.