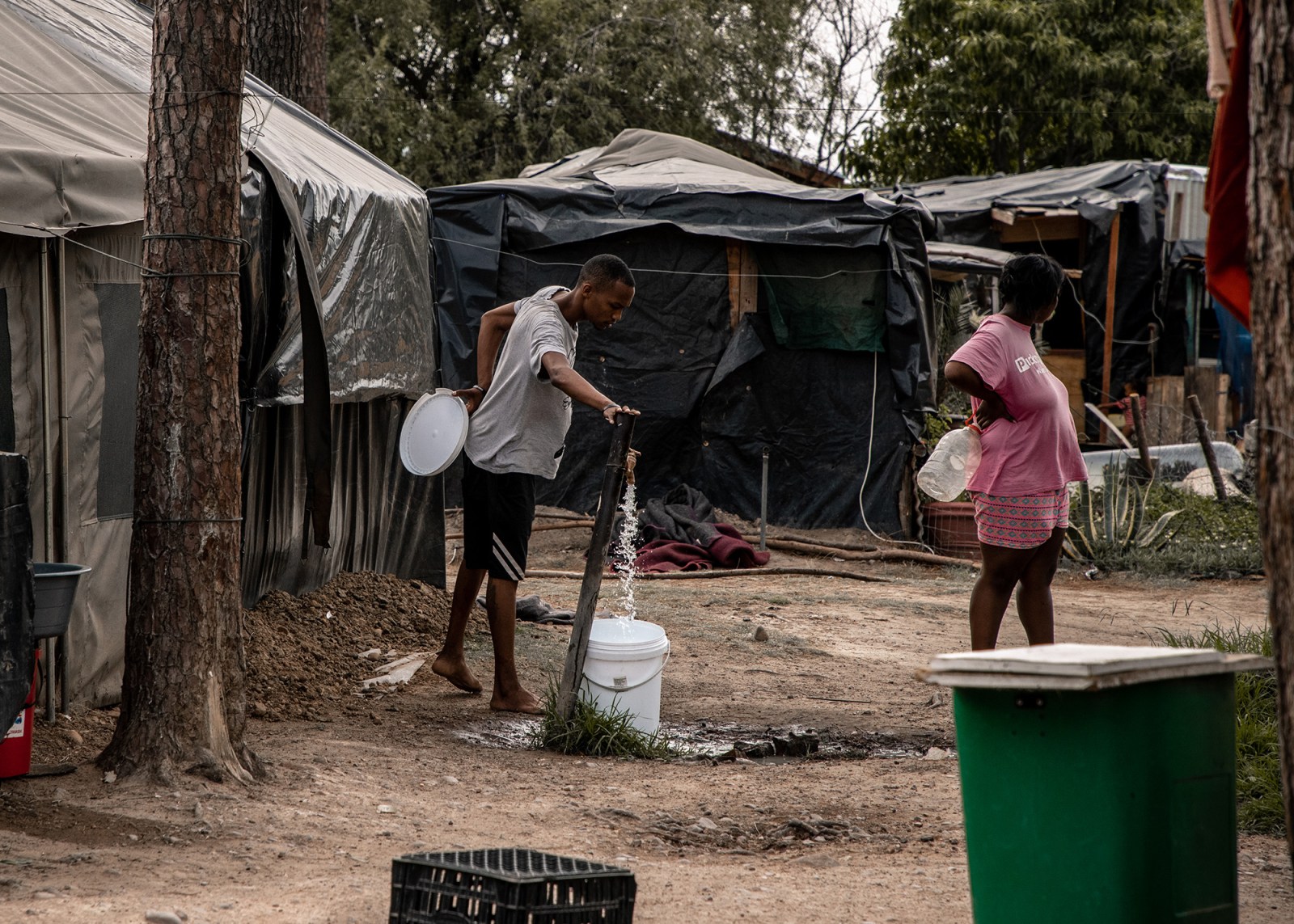 About 60 families have been living in canvas tents for almost three years at a caravan park in Paarl South. The farmworkers are among the 20,214 residents waiting for housing solutions from the municipality.

In the shade of a blue gum, Henning Gillespie stood overlooking an empty plot of land. He pointed to it and said, “I hope that’s our place one of these days.”

Gillespie had heard talk about Nutec prefabricated structures being built on that area of clear land soon. Behind him was a forest-like terrain. Interspersed between the tall trees were more than 30 green canvas tents – the homes of Gillespie and his neighbours.

About 60 families live in the New Orleans Caravan Park in Paarl South, in the Cape Winelands. The community has been waiting for the municipality to build Nutec houses for them since 2018.

Most of the families come from a property called Die Blou Huis in Paarl, which housed farmworkers. In 2018, the land on which Die Blou Huis stood was sold and the farmworkers living there were evicted.

It was agreed between the Drakenstein Municipality and the evictees in the Western Cape High Court that the evictees would be moved to the caravan park as a temporary measure. The agreement was for the municipality to build Nutec houses for the families within three months, residents told Daily Maverick.

Next month they will have been waiting for three years.

Most of those living in the park now struggle to find employment but some work on nearby farms.

The Cape Winelands is a hotspot for farm evictions, said Billy Classen of the Rural and Farmworkers’ Development Organisation. Evictions in the area happen at a rapid pace, he added.

“The courts just evict people… but it is not just the law, there must be humanity in this,” Classen said.

According to a Daily Maverick report in 2019, about 20,000 farmworkers were vulnerable to evictions in the Drakenstein Municipality. The municipality was unable to provide updated figures.

Farmworkers are evicted, and then the land is developed for up-market housing schemes, Classen told Daily Maverick.

“The farmworkers who have been staying on the farms for years need to go live in the backyards and then some end up on the streets,” said Classen.

Drakenstein Municipality spokesperson Gerald Esau said the area has an active housing demand of 20,214 people, of whom more than 3,000 are rural dwellers.

Esau said that initially the evictees at the caravan park were to have been relocated to an emergency housing site at Schoongezicht.

But the project was delayed after backyarders in the surrounding Milky Town and Green Hills communities threatened to invade the site unless their housing needs were also addressed by the development. That was in 2018 and 2019, said Esau.

It was decided that the municipality would clear an area and erect Nutec housing in the caravan park for the evictees.  The expected civil works date is June, said Esau. “Our intention is to erect the Nutec houses after that.”

But word has yet to trickle down to the community.

“We hear nothing [from the municipality],” said Gillespie. “Nothing but empty promises.”

For the time being, residents continue to live in appalling conditions, residents Willem Fikster and Abraham Quantiney told Daily Maverick. More than 10 residents have died since 2018, they said.

“There is no word for the way [the farm evictees] are living,” said Classen.

Despite their circumstances, when Daily Maverick visited the area on 8 March, it was evident that the community took pride in their space. Outside some of the residents’ temporary homes are garden patches. Inside a few of the homes there are photographs and small personal touches everywhere.

Residents share toilets and walks to and from communal taps to access water. During summer, when temperatures can soar to above 40℃, being inside the tents is unbearable, said Gillespie.

In the winter it is worse.

Tents get wet. Water leaks through the roofs and through the ramshackle floorboards. Some residents have made use of planks to keep the tents’ roofs sturdy over their heads. These planks don’t always work. Trees have fallen on three of the tents in the campsite, destroying the shelters.

Three Nutec houses replaced those tents, but the rest of the community still waits, patiently, for their Nutec homes.

Resident Karel van Staden said children of the community are growing old in the caravan park.

“Ons wag nou baie lank [We have been waiting a long time],” Van Staden said. “Ons kan nie so op ’n hoop bly nie [We cannot continue living like this all in a heap].” DM