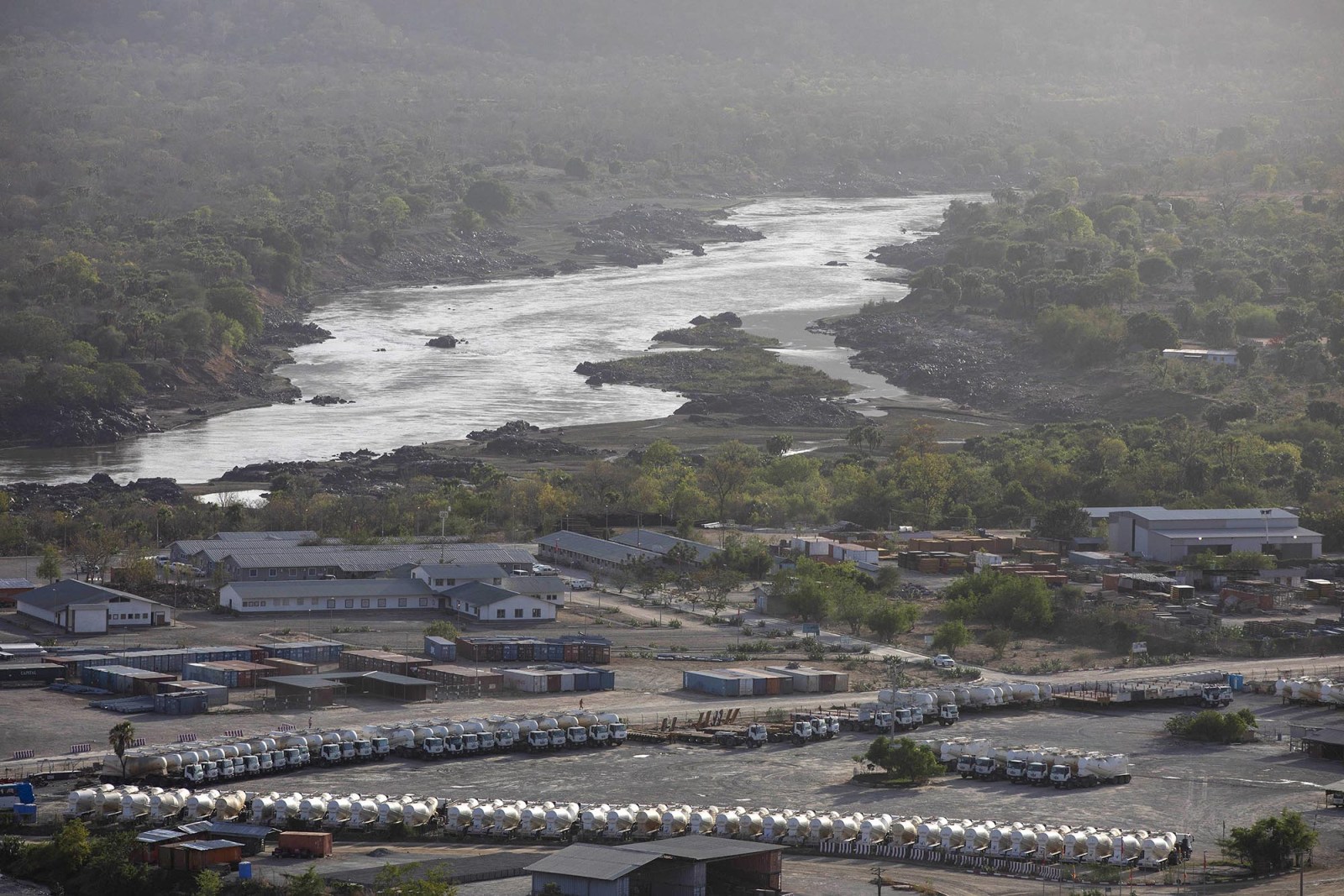 The Blue Nile flows downstream towards Sudan as cement trucks sit parked in the foreground at the site of the under-construction Grand Ethiopian Renaissance Dam in the Benishangul-Gumuz Region of Ethiopia. (Photo: Bloomberg via Getty Images / Zacharias Abubeker)

Egypt and Sudan want an international quartet to replace SA as mediator of the Nile dam negotiations.

With the rainy season approaching, tensions are once again rising among Ethiopia, Egypt and Sudan over the giant Grand Ethiopian Renaissance Dam (GERD) that Ethiopia is building on the Blue Nile, just before it flows into Sudan.

Addis Ababa is preparing for its second filling of the dam when the rains come in June or July. Yet no resolution of the bitter dispute about the operation of the dam, being built to power a 6,450 MW hydroelectric generator plant, is in sight. On the contrary, Sudan and Egypt have just proposed another significant change in their protracted negotiations about how to manage the water flows from the 74 billion cubic metre dam.

Location of GERD on the Nile River

From November 2019 until mid-2020, the United States and the World Bank were leading the mediation. But Ethiopia felt the Trump administration was partial to Egypt. When Egypt was about to move the issue to the United Nations (UN) Security Council, all three disputants were persuaded to instead hand it to the African Union (AU) – to ensure an “African solution for an African problem.”

As AU chair for 2020, South Africa effectively took over the mediation. It was more impartial than the US but in the end, could not resolve the impasse either. And so earlier this year, Pretoria referred the dispute to the AU for a decision on the way forward.

South Africa’s International Relations and Cooperation Minister Naledi Pandor told Daily Maverick last month that the leaders of Ethiopia, Egypt and Sudan all wanted President Cyril Ramaphosa to continue as mediator even after he handed over the AU chair.

But clearly, Egypt and Sudan had other ideas. Last week Egyptian Foreign Minister Sameh Shoukry told a visiting Democratic Republic of the Congo (DRC) official that his government supported Sudan’s proposal to transfer mediation to the AU, the European Union, the UN and the US. The mediation would be under the auspices of DRC president Félix Tshisekedi as AU chairperson, Egyptian foreign ministry spokesman Ahmed Hafez said.

South African officials told ISS Today that the quartet proposal had been under discussion and that they were surprised Shoukry had gone public with it. Ethiopia would have to approve the new arrangement since it needs to be agreed upon by consensus.

This week Ethiopia’s foreign ministry spokesperson Dina Mufti told a press conference in Addis Ababa: “Ethiopia believes the AU-led negotiation over the GERD will bring a win-win solution to all … The tendency to invite various parties as mediators to the issue while the AU-led negotiation has not been finalised is demeaning the efforts of the AU.”

Whether a third mediator could resolve the protracted dispute is an open question. William Davison from the International Crisis Group doesn’t believe the new format proposed by Sudan and Egypt would much improve the prospects of an agreement. Especially not before the summer rains when Ethiopia would begin the second filling of the dam.

He noted that the EU and US were already observers to the AU-led mediation and would probably continue to defer to the AU if the continental organisation wanted to remain in the driving seat. Davison added that some EU officials were worried that if the mediation process changes significantly now, valuable time could be lost ahead of the second filling of the dam.

“Realistically, given everything that’s gone before and the very significant deterioration in relations between Khartoum and Addis, we’re unlikely to see a comprehensive deal on GERD that includes its long-term operation before the second filling.”

Davison said some observers had scaled back their ambitions. They would now consider it a success if the second stage of filling could be managed in a cooperative manner that did not cause damage downstream in Sudan, leading to diplomatic escalation or worse.

“Whatever happens, the Ethiopians still do not look inclined to make any significant concessions, despite the increased international pressure on Addis Ababa – whether over the GERD, for their part in the Sudan border tensions or the conflict in Tigray,” Davison said.

Pretoria has not yet reacted officially to the Egypt–Sudan proposal for a quartet to take over mediation from South Africa. However, some officials are believed to be quite well disposed to the idea – as long as the AU remains in charge of the process.

What they like about the proposal is that giving important roles to the powerful international players – the US, EU and UN – would enable them to exert leverage over the three disputants, which the AU hasn’t been able to do. Yet for that same reason, Ethiopia would probably prefer for the AU to remain in charge, as Mufti indicated.

Some in Pretoria also believe the US stance has changed significantly under Biden. Whereas Trump’s government was seen, by Ethiopia and others, to favour Egypt, the Biden administration has signalled it will be more even-handed. It has already resumed the financial aid to Ethiopia that Trump suspended after Addis Ababa declined to sign a proposed US deal in February last year that Egypt had signed.

It will clearly take much leverage from the three non-African forces in the quartet to shift these stalled negotiations. Egypt fears any significant loss of the waters on which it is almost entirely dependent, while Sudan fears potential damage from a release of too much water from the dam. Both seek a legally binding agreement that would control the release or retention of water in the GERD.

Ethiopia insists that the GERD is part of its sovereign domain. Since it needs the dam for the country’s development, it won’t be bound by external constraints that reduce the GERD’s benefits. A compromise between those two polar positions seems tricky to attain but is essential to resolve this festering issue that has a high potential to spark conflict. DM