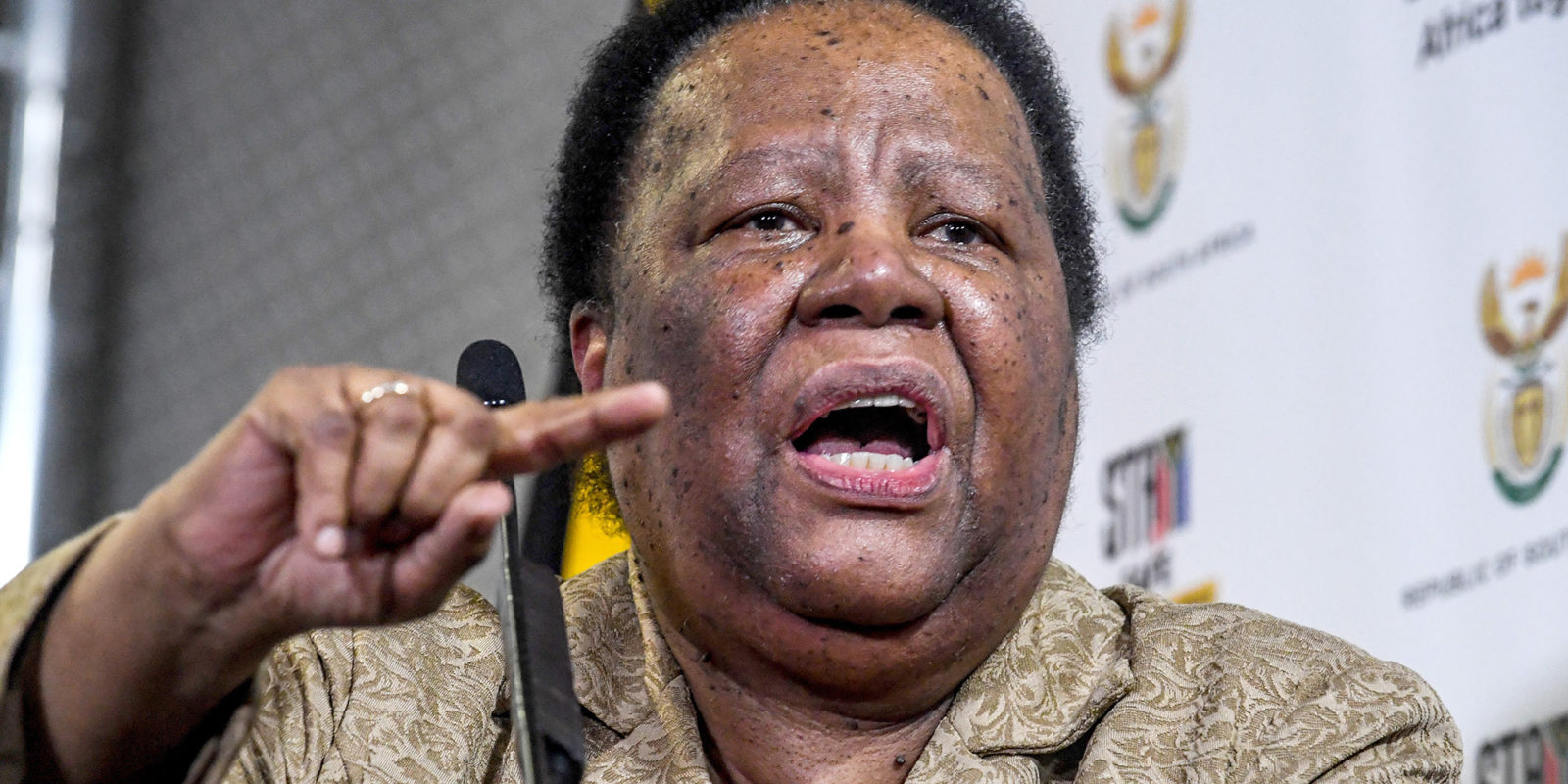 International Relations Minister Naledi Pandor says while Covid-19 disrupted SA’s agenda for its chairing of the African Union last year, the country still made an important contribution to peace in Africa.

President Cyril Ramaphosa is likely to continue as the African Union’s (AU’s) mediator in the bitter dispute among Ethiopia, Egypt and Sudan over the giant dam Ethiopia is building on the Nile. He vacated the chair of the AU this month, but the leaders of the three countries want him to continue his role, said International Relations and Cooperation Minister Naledi Pandor.

She added that the AU summit on February 6 had confirmed that Ramaphosa would also continue to be the organisation’s champion in the fight against Covid-19, because of the good job he had done leading the continent’s response to it last year as AU chair.

Ramaphosa’s successor as AU chairperson, President Felix Tshisekedi of Democratic Republic of Congo (DRC), first proposed that Ramaphosa should continue to coordinate the pandemic response. “And we are pleased at that because the president has done a great deal,” Pandor said.

Pandor also said that the Ramaphosa had talked to the leaders of Ethiopia, Egypt and Sudan just before the AU summit, “and all of them would like South Africa to continue to be involved” in the Nile Dam negotiations. South Africa was just waiting for Tshisekedi’s confirmation.

Last year, as AU chair, Pretoria led the mediation of the negotiations between the three countries that are locked in a dispute about the Grand Ethiopian Renaissance Dam (Gerd), which Ethiopia is constructing on the Blue Nile just before it flows into Sudan.

The AU and South Africa took over the mediation midway through last year to forestall the UN Security Council taking up the issue, as Egypt had wanted. The move was done to ensure “African solutions for African problems”.

But the AU and South Africa have also been unable to help resolve the dispute. Just weeks after they took over the mediation, Ethiopia began filling the dam, in apparent breach of an undertaking not to do so until it had agreed with Egypt and Sudan on how the dam should be filled and operated.

Pandor said after the negotiations again deadlocked recently, that Pretoria had referred the issue to the Bureau of the African Union Heads of State and Government for direction on the way forward. As a continuing member of the bureau, South Africa would be part of the discussion on how to advance the negotiations.

The essence of the disagreement is that Egypt, which is almost totally dependent on the Nile for its water, fears the giant 6,450MW hydroelectric Gerd – with a reservoir capacity of about 74 billion cubic metres – will deprive it of a substantial part of that water.

Ethiopia insists that it needs the electricity  for the development of its largely under-developed people and that others cannot dictate to it how it should manage the dam. Sudan has a more ambivalent attitude to the dam, but mainly fears it could cause flood damage.

“The sticking point [in the negotiations] is really arriving at an agreement which Ethiopia would be satisfied does not impose rigid obligations [on it] for consultation with Egypt and Sudan.

“Because Ethiopia is saying they wish to determine their own development trajectory, and the demand by the other countries that any thought of future development must be placed before the two countries before it can be acted upon, is not acceptable to them.

“Essentially, it’s around the issue of Ethiopia saying, ‘we want to determine our development and Egypt saying, we are downstream, as is Sudan. We rely on the waters of the Nile.’”

And so Cairo’s position was that any reduction in the water supply which was not subject to a legally binding agreement between the three countries posed an existential threat to Egypt.

And Sudan feared that since much of its population lived close to the Nile, any mishap in the running of the dam which released too much water could threaten millions of people. Sudan had a very small dam just downstream of Gerd which could be overwhelmed by the overflow of the much bigger dam.

“So they want a binding water-filling agreement which would offer them the assurance and protection that is desirable for their population.”

Ethiopia dismisses these demands for a legally-binding agreement on its management of the dam as an attempt by Egypt and Sudan to exercise control over what it regards as a sovereign matter.

Pandor described how she used to motivate the three countries by telling them their differences were smaller than those between the ANC and the old National Party and yet the South African rivals had managed to negotiate an agreement for a democratic dispensation.

But Pandor did not think the dispute would lead to war, as some observers fear.

“No, I don’t think so. I think they can be persuaded. I think President Ramaphosa has got the ear of all of them,” she said, adding that he was ready to continue his mediation role.

“And he is just waiting for the chairman of the AU [Tshisekedi]  to inform us as to when.”

Reviewing South Africa’s overall chairing of the AU, Pandor said, “Covid disappointed because we had grand plans. We had worked hard to develop the concept paper. We had key focus areas.

“But I believe through the response to Covid, President Ramaphosa showed leadership and really did amazing work. He devoted energy.”

He had mobilised the AU bureau to hold more meetings than it had ever held before and to make real decisions about Covid-19. She cited particularly the decision to create an online medicines platform through which African countries could pool resources to buy medicines and equipment.  She also mentioned the AU’s support to the Africa Centres for Disease Control and Prevention, which had technically coordinated the AU’s response to the pandemic.

The coordinated African response was a “very important legacy achievement… because he showed, through inclusion, that together, we could help the continent. So, even though we didn’t achieve our six key priorities, what we did with Covid was amazing.”

Nevertheless, Covid-19 had not completely bumped everything else off South Africa’s agenda, she said, particularly the campaign for “Silencing the Guns by 2020” which had been launched in 2013 and had been declared the AU’s theme for 2020.

“We were very active, on the matter of silencing the guns, especially with respect to Libya. “

Last January, Germany and the UN convened a conference in Berlin on the Libyan conflict which launched an international peace process to try to end the growing civil war between the UN-backed government in Tripoli and a rival government based in the eastern city of Benghazi.

Benghazi forces led by General Khalifa Haftar began a military assault on Tripoli in April 2019 which came close to toppling the government of President Fayez al-Sarraj. This massively increased the involvement of foreign powers on both sides in the conflict, leading to a stalemate on the battlefield.

The Berlin conference, including a follow-up meeting in Munich in February, eventually led to the warring parties agreeing to a ceasefire, in Geneva in October, and then later agreeing on a representative interim government to lead the country to elections in December this year.

Outsiders, including Germany and the acting UN envoy, Stephanie Williams, have been widely credited for this progress towards peace, with little if any credit given to the AU.

But Pandor insisted the AU and Pretoria had played an important role behind the scenes.

“A lot of things happen quietly, without you observing them. So we had a delegation from Libya here, a senior delegation, and we had engagements with General Haftar. So we spoke to all sides and persuaded them that the only way you will achieve peace is when Libyans sit together.

“So we’re very pleased at the Geneva talks and what has happened with the UN leadership. We’ve been there all along. I participated in the Berlin discussions; in Munich, I was there. But it all happens quietly.

“We’ve been there all along, we’ve been there right through. We insisted that we should be there. But, of course, there’s huge external interest in Libya and other parts of the continent, which is another factor that we ignore… what is the role of external parties in the African theatre of conflict? It’s massive, it’s mainly resources, oil, very, very obvious. And Sahel as well.”

“There was a point at which that comprehensive agreement was almost at risk. And again, South Africa stepped in and we got the two together.”

Ramaphosa had met South Sudan’s President Salva Kiir and his arch-rival, now Deputy President Riek Machar, in Addis Ababa and had persuaded them to “listen to each” and to implement the 2018 peace agreement.

“So we weren’t totally outside of peace processes.” DM