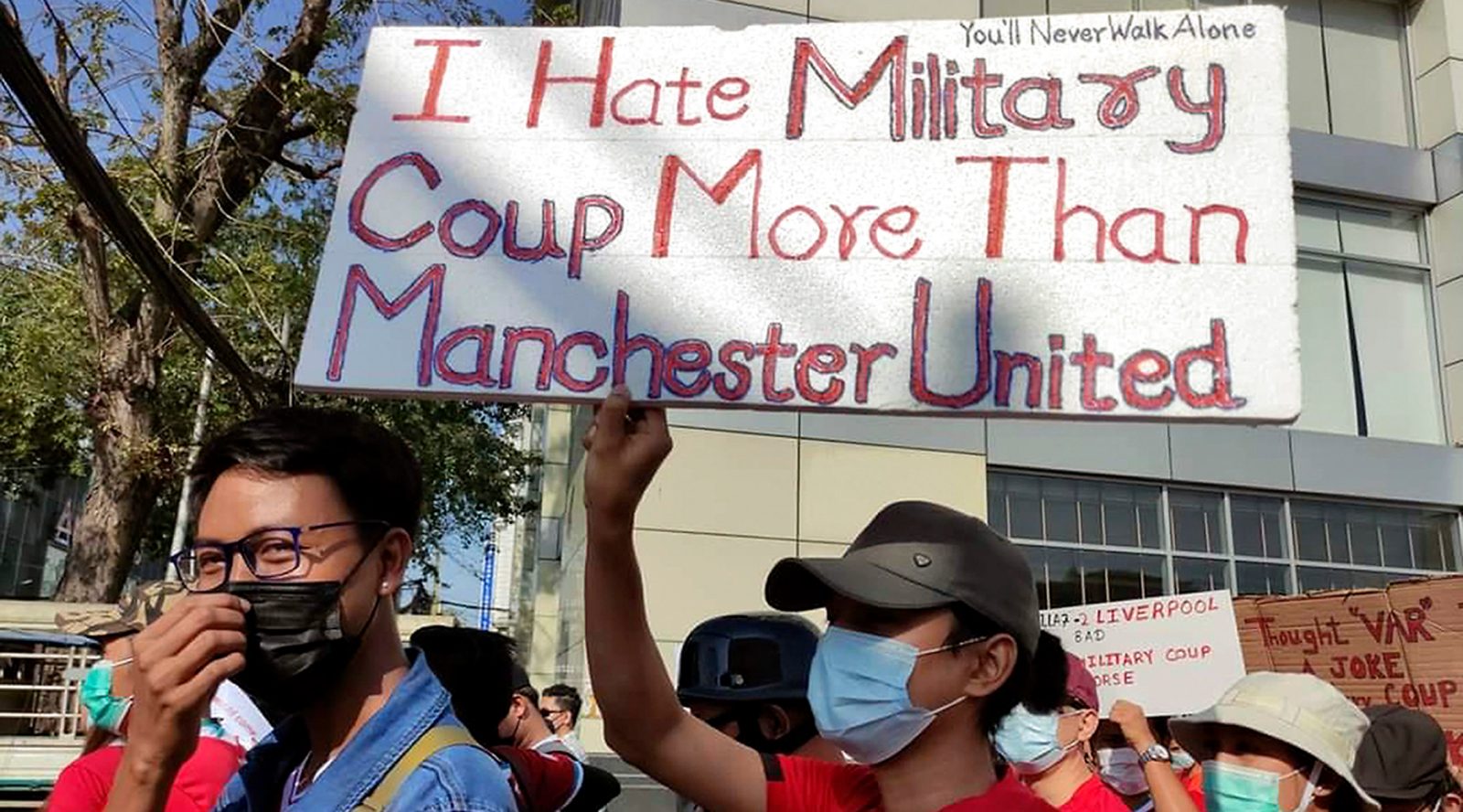 The country of Myanmar is under a military coup as the army has locked up several high-level politicians and taken over the government - protestors have been out on the street and one of them had a very interesting sign! (Photo: tribuna.com/Wikipedia)

All over the world gigantic battles are taking place. This time they are not wars (although there’s still enough of those going on) but battles between pro-democracy activists and authoritarian regimes and elites.

These battles have many and varying frontlines.

For example, on this very day at the World Trade Organisation’s General Council meeting the battles are among mostly besuited men, rallying to protect some of the richest and most powerful pharmaceutical companies in the world from a proposal from South Africa and India that WTO rules protecting intellectual property rights over Covid-19 vaccines be waived for the duration of the pandemic.

This is necessary to allow poor countries a better chance of access to affordable vaccines and to overcome global vaccine apartheid. As Médecins Sans Frontières (MSF) has pointed out, such a measure would help tip the balance in a world where although up to 175 million people have now been vaccinated against Covid-19, almost none of them are in Africa.

Meanwhile on the streets of Yangon, Mandalay and many other towns and cities in Myanmar, battles continue between hundreds of thousands of ordinary people and a military junta that was dissatisfied with even the small slice of democratic freedoms it had granted Myanmar’s people when it agreed to share power with the opposition led by Aung San Suu Kyi in 2011.

In Hong Kong, the battle is between the most powerful authoritarian regime in the world, China, whose puppets in the Hong Kong administration are now, as predicted, using the new national security law to try to imprison and silence all the leaders of the pro-democracy movement.

In the chilling words of the Washington Post: “With new mass detentions, every prominent Hong Kong activist is in jail or in exile.”

In Zimbabwe, the war is between an unholy cartel of business leaders and Zanu-PF (described in the report Maverick Citizen recently published on behalf of people in Zimbabwe) and political and social justice activists like Alan Moyo, Joanna Mamombe and Makomborero Haruzivishe (described in an article by Thandekile Moyo today).

In India, it is between the Hindutva regime of Narendra Modi and farmers, students, the media, climate and environmental activists – in fact any person or organisation who sins by holding to the democratic norms which, until Modi’s rise, were at the heart of India’s democracy and secular constitution.

Be warned, the type of power Modi built and now consolidates with rule by law is the type of power former US president Donald Trump is setting out to consolidate as he begins his battle to recapture the Capitol. If the Democratic Party fails to act decisively to narrow inequality and injustice in the US it will be the fuel Trump needs to try to power the next phase of the Maga movement.

Be warned too that the power that China wields against activists in Hong Kong is the same power it will support being used by the growing number of governments dependent on its largesse in Africa.

If you take a tour around the globe you will find these struggles, to a greater or lesser degree, taking place in every country of the world, including ours. Some are continental, some are national, some are local, but they are going on with varying degrees of severity everywhere – and the future of democracy and human rights depends on them.

The rule is that where activists mobilise and assert people’s power in campaigns for human rights and equality, democracy is forced to expand. In Chile, for example, which was once the petri dish for neoliberal economics propped up by Augusto Pinochet’s murderous military rule, following 2020’s mass protests a new constitution is now being negotiated after a referendum. The protests had started over a fare hike on the Santiago metro!

But on the other hand, when people’s struggles subside or are disrupted by exogenous crises like the Covid-19 pandemic, as happened in India and Hong Kong, the elites and their security forces move quickly to try to reclaim lost ground… and more.

In these titanic struggles the other rule is that poor and marginalised people have no one they can depend on other than themselves and the solidarity they might elicit internationally. Although President Cyril Rampahosa and Prime Minister Modi might timidly propose pro-poor motions at the WTO, at home their actions are consistently anti-poor.

Although the US government of President Joe Biden might approve the release of the CIA report into the killing of Jamal Khashoggi, it will not cease doing business with that undemocratic regime or make reparation for its complicity in the hidden (from the world) horrors of the Saudi-powered war in Yemen.

Activists may not always feel it, but they are part of a global tribe that transcends nationality, religion, race, gender and ethnic origin. This makes shows of solidarity and awareness of each other’s struggles all the more important.

In the thick of intense local battles we should find time to understand and show support for human rights campaigns taking place in other countries. South Africans should never forget the importance and power of international support or how signs of solidarity – however small – can lift spirits and keep hope alive. Recall the importance of the global anti-apartheid movement, or how international solidarity put pressure on the WTO in 2001 and helped bring down the price of antiretroviral medicines in the Aids epidemic.

Finally, as these future-defining struggles unfold, it’s not just important to ask yourself whose side are you on? That should be easy. It’s also important to decide what steps and actions you can take to show it. DM/MC