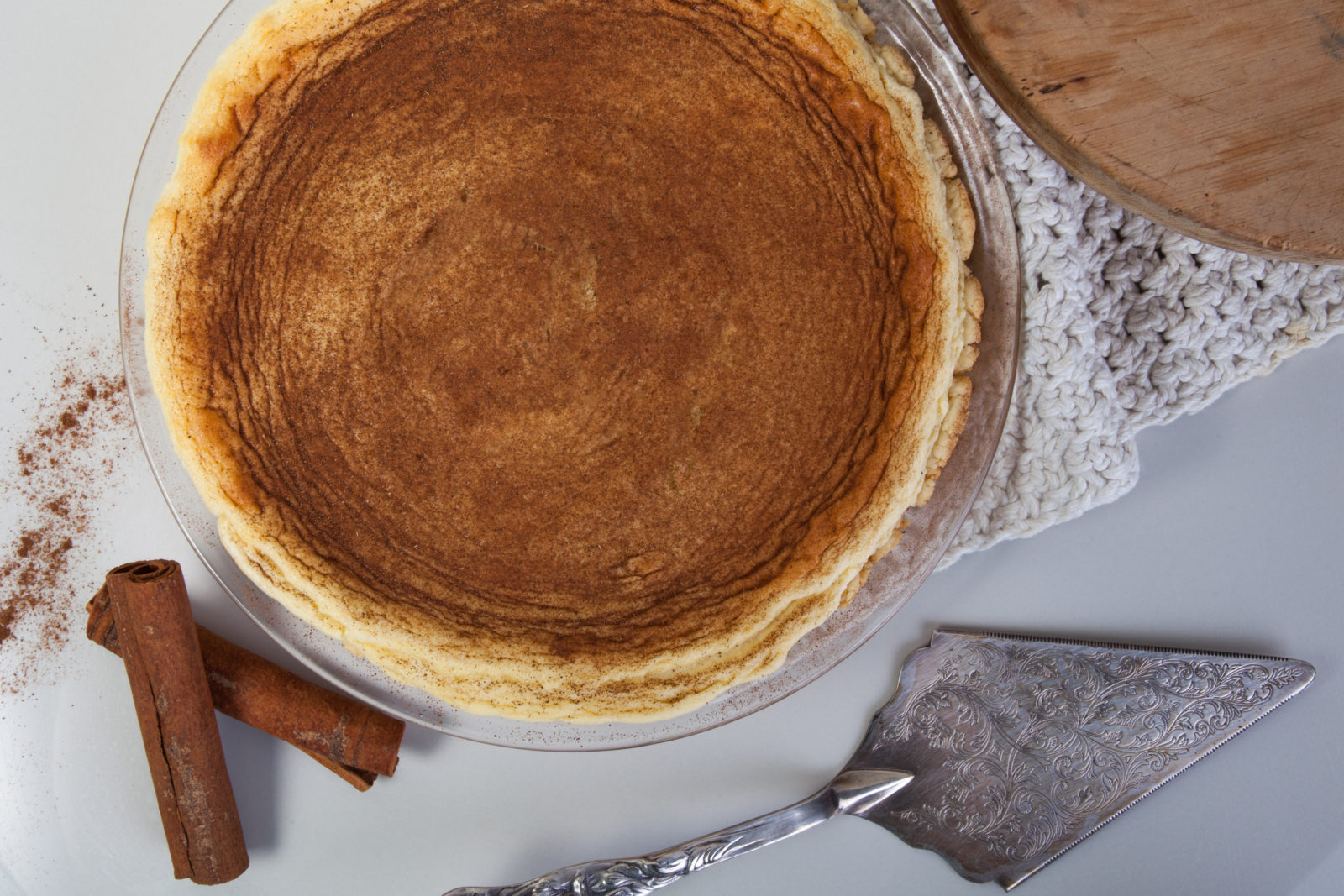 It will be National Melktert Day on Saturday 27 February, and there are few dishes more worth honouring than our beloved cinnamon-infused national treasure.

Time and distance create an ever widening gap, and this applies to cooking and traditional recipes as much as it does to life and existence; the thrust and thrum of living a long life a day at a time, if we are lucky enough to do so with happiness and good health. Slowly, incrementally, everything changes.

Take the humble yet esteemed melktert, and I do prefer to use the Afrikaans term for a milk tart, because the former is specific and the latter generic. In Leipoldt’s Cape Cookery (my thumbed version of this latter day anthology of some of his work, published by WJ Flesch and partners, dates to 1976, at the start of my career), C Louis Leipoldt writes:

“A milk tart. Boil two pints of milk with a feathering of cinnamon, a bit of dried tangerine peel, a teaspoonful of honey and half a cupful of coconut milk, one bitter almond, shelled and blanched, and one peach kernel. Beat three egg yolks with a little candy sugar and stir them into the boiling milk; take off and pour through a sieve; add another egg beaten up with the whites of the three eggs and a small glass of sweet wine, and whisk well. Pour into the lined tart dish and bake fairly quickly in the oven.”

I love the word “feathering” there. Compare this recipe with what is regarded as the modern-day classic melktert recipe in SJA de Villiers’ now more than half-a-century old Kook en Geniet/ Cook and Enjoy it, in which, in the revised edition of 2009, there is the grated peel of an orange but no tangerine (by which I believe was meant naartjie), no trace of almonds bitter or otherwise; neither honey, coconut milk nor peach kernel, and certainly no sweet wine. Leipoldt also makes no mention, in the first of the three recipes he proffers, of decorating the finished tart with a dusting of ground cinnamon. He does dust the completed tarts of the other two recipes, though not necessarily with powdered cinnamon.

The second recipe (“Another milk tart”) requires: “Take coconut milk, new milk and cream, of each an equal portion, and whip them well with a pinch of salt, the yolks of four eggs, a little grated nutmeg and a little powdered tangerine peel. When they are well beaten, add honey or sugar to sweeten; put the mixture on the fire and stir till it thickens, but do not let it boil. Then pour into your mould and bake. Sprinkle cinnamon and nutmeg on top.”

So, today’s melktert has little in common with old colonial recipes, at least as seen in Leipoldt’s very informed view, other than the milk, cinnamon and eggs. The gradual change over many decades is quite profound, and I fully intend to create my own adaptation which would combine the modern day melktert recipe with elements of those ingredients as described by Leipoldt. Perhaps even the brandy and a solitary bitter almond, if I can find one.

That there can be honey and almonds in a milk tart is food for thought for modern creative chefs looking to switch the recipe up without losing the true tradition. Which is not to suggest that we should be messing with perfectly good traditional recipes; but Leipoldt’s three alternatives, even from much earlier days, perhaps give us a little licence to experiment. The key would be that the end result must avowedly resemble and taste like a proper melktert, in texture as well as taste.

Further grist for the imagination comes in his third recipe, for “a rich milk tart”:

“You may make this by pounding in a mortar a handful of blanched sweet and one bitter almond with a few apricot or peach kernels, three tabespoonsful of sugar candy, a teaspoonful of rice flour, some flicks of mace and a bit of dried tangerine peel, which mixture you must wash with coconut milk through a sieve. With what comes through you must mix its own amount of cream skimmed from the morning’s milk, and the yolk of as many eggs as will equal it in weight. When you have well mixed these you may add, also, the white and yolk of one egg beaten up with a glass of brandy or sweet wine. This you pour into the pie dish, which you have lined with paste rolled out 14 times at least, and you must bake it quickly in a hot oven. When done you may put on top of it some grated nutmeg and little crosses made of citron peel.”

Naartjie and mace were frequently used in the old colonial Cape kitchen, and brandy and sweet wine were commonplace; so we can understand from this that, just as in our time or any time, recipes reflected the norm and what was available. If every cook would have their own version of a melktert, as Leipoldt suggests, that is likely to be at least in part because of what was in the cupboard.

As he put it: “The best (tart) was undoubtedly the old-fashioned milk or custard filling, modified from the old Italian recipes in so many different ways that almost every cook had his, or her, own way of making it – and thoroughly despised anybody else’s method.”

They were “all”, he added, “very tasty”, as is the one we share here. DM/TGIFood