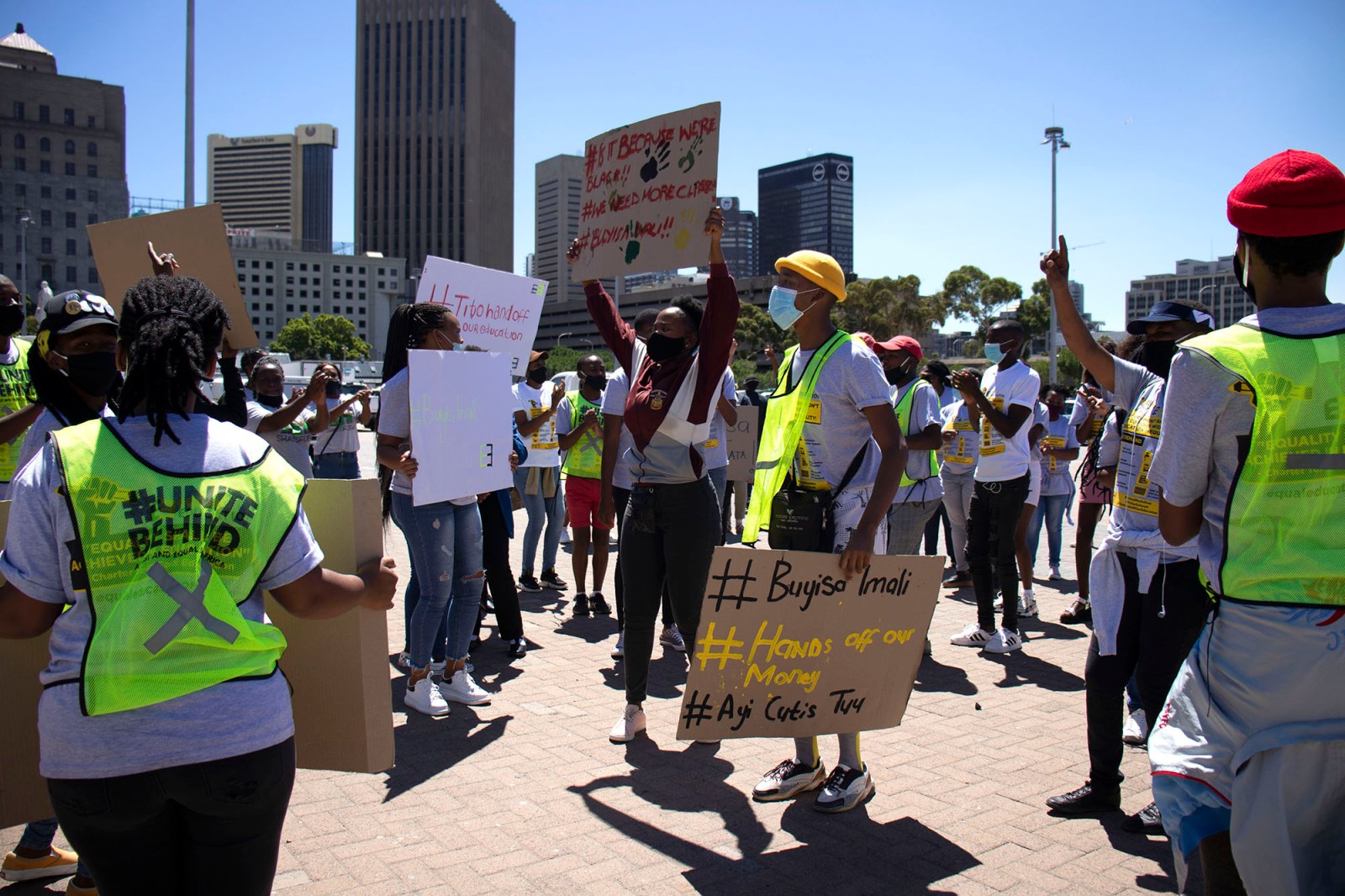 Protesters were turned back from Parliament’s gate and made to protest at least 800m away before Finance Minister Tito Mboweni’s Budget speech on Wednesday. Among the groups of demonstrators was Equal Education, which called for a reversal of budget cuts to the basic education department.

Almost four months after Finance Minister Tito Mboweni made his Medium-Term Budget Policy Statement (MTBPS), learners and parents were back outside Parliament’s gates demanding that he reverse the cuts made to basic education.

This time protesters were moved by SAPS officers from Parliament and told to gather at least 800m away, on the Grand Parade.

There, protesters were met by at least eight police vans and two Nyalas. A number of SAPS officers, with face masks and shields, stood behind the group.

Different groups were gathered under the scorching sun at the Grand Parade, singing, while others sat in the shade. About 60 people were present.

“We’re here to ask Mboweni not to cut money from the [basic education] department. For example, at the school that I go to, we can’t fix the drain, so the taps don’t work. We don’t have enough textbooks, we’re sharing. That money is crucial for us to fix our schools,” said a Grade 11 pupil from Mfuleni.

The organisation made similar demands to the ones it made the last time it protested outside Parliament: for Mboweni to increase funding for basic education and for the basic education department to be classified as a frontline department in the fight against Covid-19.

In its statement, EE said: “Almost 2,000 school infrastructure projects have been stopped or delayed in the 2020/2021 financial year. This includes new projects, maintenance and repairs, and upgrades. At a large number of schools in rural areas, learners and teachers are subjected to dangerous and undignified plain pit toilets and don’t have access to a reliable water supply.”

In a voice recording, EE’s co-head of research, Hopolang Selebalo, said: “National Treasury is failing to prioritise basic education and has shown this through the Supplementary Budget which was tabled last year by taking R2.1-billion from the overall department budget. R1.7-billion was cut from school infrastructure grants alone and a further R4.4-billion has been reallocated within these grants to cover Covid-19.”

In his Budget speech, Mboweni said, “R678.3-million is earmarked for provincial departments of social development and basic education to continue rolling out free sanitary products for learners from low-income households.”

Kenneth Matlawe, an activist from the Housing Assembly, said, “we’re here to make our voices heard so that the policymakers can at least consider using at least 5% [of the Budget] on housing”.

According to the Budget Review, the overall budget for Human Settlements has been cut by the National Treasury. The revised budget in 2020/21 was R14.9-billion. The 2021/22 budget for human settlements is R13.4-billion – a cut of R1.5-billion.

Attempts by the South African Federation of Trade Unions to march to the Parliament precinct were foiled by police. Their permit to march had been declined by the City of Cape Town. DM