Protesters outside Parliament demand an end to cuts, more education spend and no bailout for SAA – Did Mboweni listen? 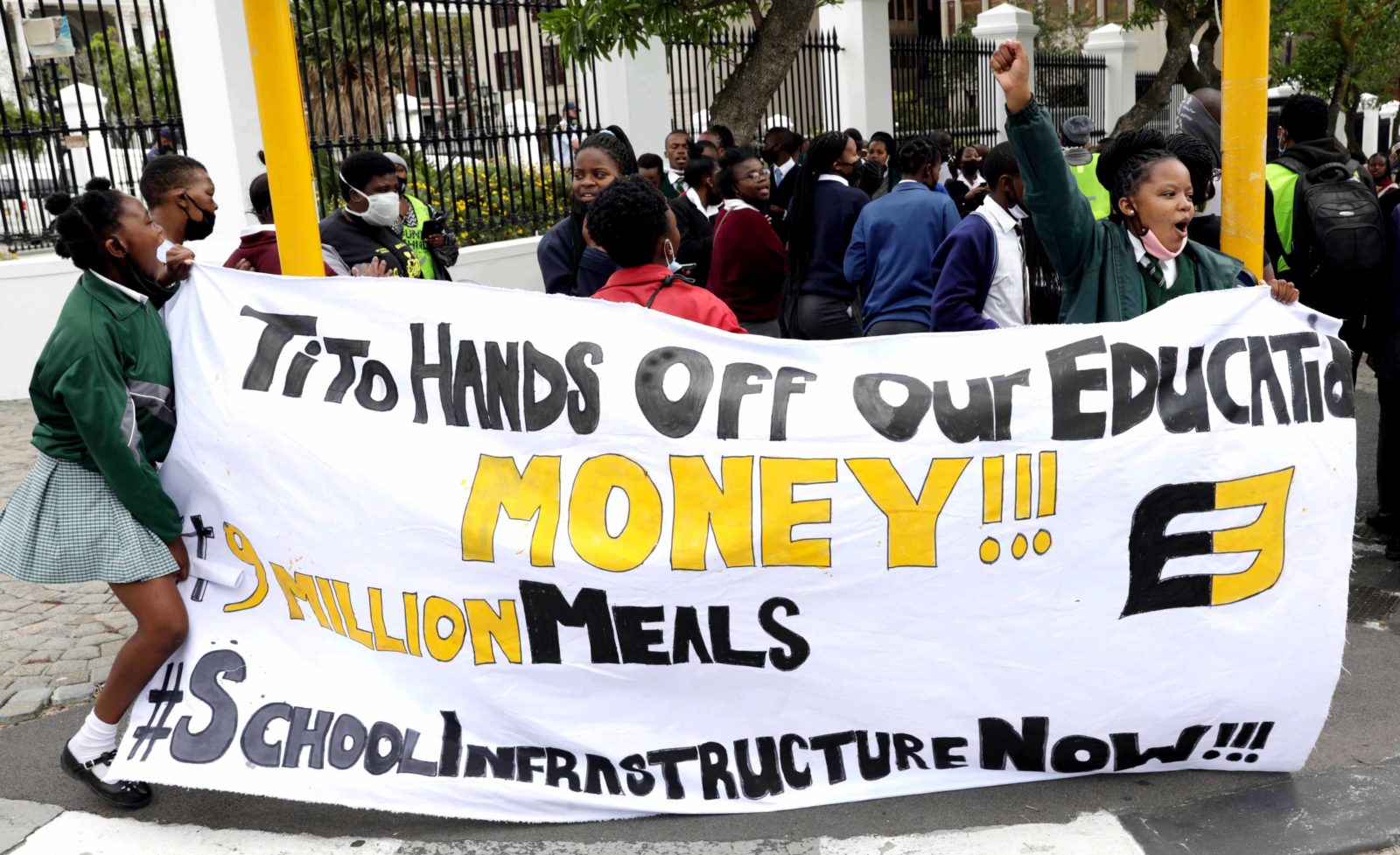 Equal Education members wants Finance Minister, Tito Mboweni to reverse budget cuts to basic education during their protest outside Parliament ahead of the Medium-Term Budget Speech.Photo:Supplied

Ahead of the delivery of Minister of Finance Tito Mboweni’s medium-term budget speech, Equal Education picketed outside Parliament demanding more money for basic education. Black Sash demanded permanent social assistance for unemployed people, while the DA was there to oppose a bailout for SAA. Daily Maverick unpacks the demands – and whether Mboweni took note in his speech.

About 50 people gathered outside Parliament on mini-budget day with demands varying from more funding for the basic education department, a basic income grant and to not bail out the troubled SAA.

“We’re here because we want Mboweni to reverse the budget cuts. These budget cuts mean that there won’t be sufficient money to build schools and to provide sanitation,” said Ayanda Sali, an Equal Education (EE) organiser.

According to a statement released by EE, the budget cuts have resulted in “1938 school projects funding through the Education Infrastructure Grant (EIG) being stopped or delayed”.

“These budget cuts also mean that feeding schemes are severely impacted. It means that the overcrowding in schools won’t be resolved, it means that there won’t be enough money to make schools safer for pupils,” said a grade-11 learner from Mfuleni.

While equalizers were outside Parliament singing and maintaining physical distances, just after 9.30am Mboweni stepped out of his car to wave at them.

Equal Education also wants the Department of Basic Education to be made into a frontline department in the fight against Covid-19.

“I’m disappointed at the budget cuts in basic education. We deserve good, quality education and that isn’t possible to achieve when the funding keeps getting cut,” said a grade-11 learner from Khayelitsha.

In his afternoon speech, Mboweni proposed “consolidated spending of R6.2-trillion over the 2021 Medium Term Expenditure Framework, of which R1.2-trillion goes to learning and culture”.

Reacting afterwards, Rone McFarlane, EE’s co-head of research, said it was “unprecedented to see a sector receive no increase.”

Mboweni’s speech “painted a bleak picture for basic education,” said McFarlane. “We were calling for the reversal of the budget cuts and we didn’t see that. However, there is a slight victory where money was carried over for sanitation for schools in KZN and Limpopo, but then you see budget cuts to infrastructure for the Eastern Cape. So there are increases in one place, and cuts in another” .

Also present at the picket was Black Sash, which has been advocating for a basic income grant for unemployed people between the ages of 18 to 59.

When the country went into lockdown, a R350 grant for unemployed people who weren’t receiving any other government help was introduced. Recipients of this grant will continue receiving it until January 2021 while the R500 child support grant increase disappears after the end of October. This means that from November, caregivers will receive the pre-Covid-19 amount of R440.

In a statement, Black Sash said that “government’s failure to extend and increase the R500 Covid-19 Social Relief Distress Caregiver Grant means that women and children will bear the brunt of the pandemic and its national economic consequences”.

About 12 million children depend on child support grants.

Nozuko Ntuli, who was at the picket with Black Sash, said that the decrease in the grant at this time would impact her livelihood severely.

“I’m unemployed and this [child support] grant made taking care of my family [a little] easier. But what I want is to hear Mboweni announce a basic income grant,” Ntuli told Daily Maverick.

Buyelwa Philiso from Gugulethu is unemployed and was at the picket to demand a basic income grant.

“That R350 made a difference but now we’re demanding that the minister announce a basic income grant of R1,268, which is above the poverty line,” said Philiso.

The Black Sash demanded that all caregivers who receive a child support grant should also qualify for the basic income grant.

In his afternoon speech, Mboweni said that R6.8-billion would be redirected from the public employment programme for the social relief distress grant, which comes to an end in January 2021.  He did not even mention a basic income grant in his speech.

Reacting to the speech, Black Sash’s national director Lynette Maart said it was “very worrying”. “[Child support] grants are going back to R440 which is concerning because this amount is below the food poverty line which is R585. Then, we have the Covid-19 grant coming to an end in January [2021] which will leave people even more vulnerable,” she said.

Democratic Alliance: Save SA not SAA

About 10 DA members picketed with placards that said “Save SA not SAA.” Business rescue practitioners for the airline anticipate that the airline will need some R10.5-billion to restructure, and the DA is against this.

“We’re strongly opposing that and we want to tell the Minister of Finance, Tito Mboweni, that he shouldn’t be bailing SAA out. There are so many other urgent priorities for South Africa right now,” said Geordin Hill-Lewis, the DA’s shadow minister of finance.

Hill-Lewis also said that R10-billion could go towards the Covid-19 grants for a few more months, it could go to basic education or healthcare instead of “bailing out an airline we don’t need”.

Despite the protests, in his afternoon speech, Mboweni announced that SAA would get a bailout.

Lewis-Hill released a statement describing this decision as an “indefensible, immoral choice.”  DM