The pandematriculants who nailed it

The pandematriculants who nailed it 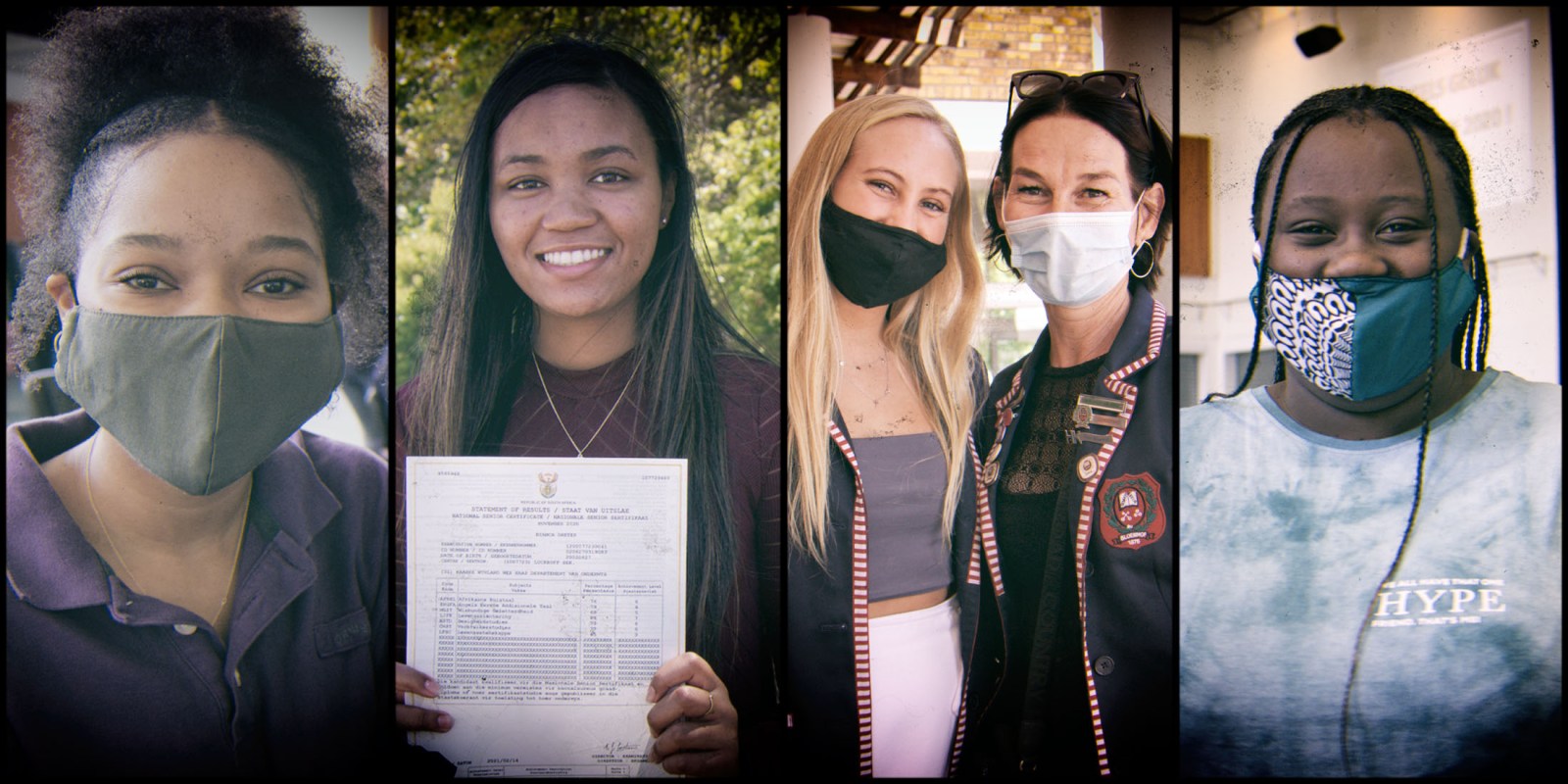 The Class of 2020 at Bloemhof High School in Stellenbosch receive their NSC results. (Photos: Rebecca Pitt)

The matric class of 2020 – a class that will forever be known as the youngsters who had to build their foundation for the future during a pandemic – received their National Senior Certificate results on Tuesday, 23 February. Anxiety, joy, sadness and relief ruled the day at schools in Stellenbosch.

“I am finally free, freeee!” shouted Qhamani Npondwana, as he walked out of Lückhoff High School in Idas Valley on Tuesday.

Npondwana, who had just received his final National Senior Certificate (NSC) results, had his hands in the air as he shouted and turned back to his teachers who watched him head for the school gates. He gave them a cheeky, chuffed smile, after getting the news that he had passed a turbulent matric year.

Npondwana was among the 2020 matriculants who received their individual NSC results on Tuesday.  Nationally, the pass rate dropped from 81.3% to 76.2%, with the Free State holding the highest pass rate in South Africa of 85.1%.

Matriculants with whom Daily Maverick spoke on the day, said they were relieved that D-day had finally arrived, marking an end to a gruelling year.

“I am feeling grateful and satisfied,” said Npondwana.

Although relief and joy marked the day for most, for a few, the day hit a sore spot.

“We missed the traditions that we have looked forward to for so long,” said Luca Luizinho, who was walking with his schoolmates to retrieve their results.

Travis Flanegan and Kyle Kriedemann agreed, saying that by the end of the year, they were drained of confidence.

That was especially true with the news that matric students might have needed to rewrite, after the Paper 2 Mathematical and Physical Sciences exams were leaked, Flanegan said.

But Casey Klaase, from Bloemhof High School in Stellenbosch, would remember her last high school year as one that was “life changing”.

“We had to learn difficult things and had to really become more responsible,” Klaase said while waiting for her results.

She said she felt “super anxious”, but quickly added that she also had faith in herself and her class.

A class of history-makers

Klaase’s class had a 100% pass rate and an average of 78.5%. Further, of the 130 students in the Bloemhof High School class, 128 passed with a bachelor degree pass and 63 passed with an A-aggregate.

The learners had made history – not only by completing their matric during a pandemic but also on paper for the school, the headmaster Wilna van Heerden told the class.

The school had given its learners extra resources, like video revision and online learning support, that allowed the class to feel less stressed about the academic year, said Melandi Möller, another 2020 matriculant from Bloemhof High School.

“We didn’t really know what to expect, but the school really ensured that we had enough resources,” Möller said.

Communication was very good throughout the times when online learning was necessary during the national lockdown, they said.

Matric learners at Lückhoff High School did not have the option to continue with classes online when South Africa went into lockdown.

By the time the school had reopened in June 2020, the matric class was already behind by a term, said a teacher at the school, Taryn Crowley.

“We thought we didn’t have enough time,” Crowley said. “But the results of the students show what they are capable of. It boosts your confidence as a teacher – even under obstacles, we managed.”

“What is especially positive is that the kids were able to maintain this pass rate and that 25% of the class passed with a bachelors, in spite of Covid-19,” said deputy principal Sherine Barendse.

Barendse, who sat at a table that had on it some learners’ NSC results, congratulated the class as they walked in. “You did it,” she cheered.

“I am still shaking and taking it in,” said Bianca Dreyer, a 2020 matric learner at the Idas Valley school. “This year was a roller coaster but I am overall proud after it.”

Dreyer, who received her bachelor’s pass with one distinction, was standing with her classmate Suné Malan outside the school gates after receiving her results.

Malan received a bachelor’s pass with two distinctions and said she was relieved to have passed everything.

Malan said the year was particularly challenging given a lack of resources and the limited time the class had to learn for the matric exams.

“In June we had to start from scratch,” Malan said.

Someleze Mona, another 2020 matriculant at the school, felt similarly.

“It was quite difficult, we were living in difficult circumstances, we didn’t have much resources but we did it, we worked hard,” Mona said. Mona had passed and said that his mother would be proud.

“Everyone who passed, congratulations. Those who didn’t, better luck next time,” he said. DM