Ramaphosa thanks SANDF for ‘essential’ role during lockdown 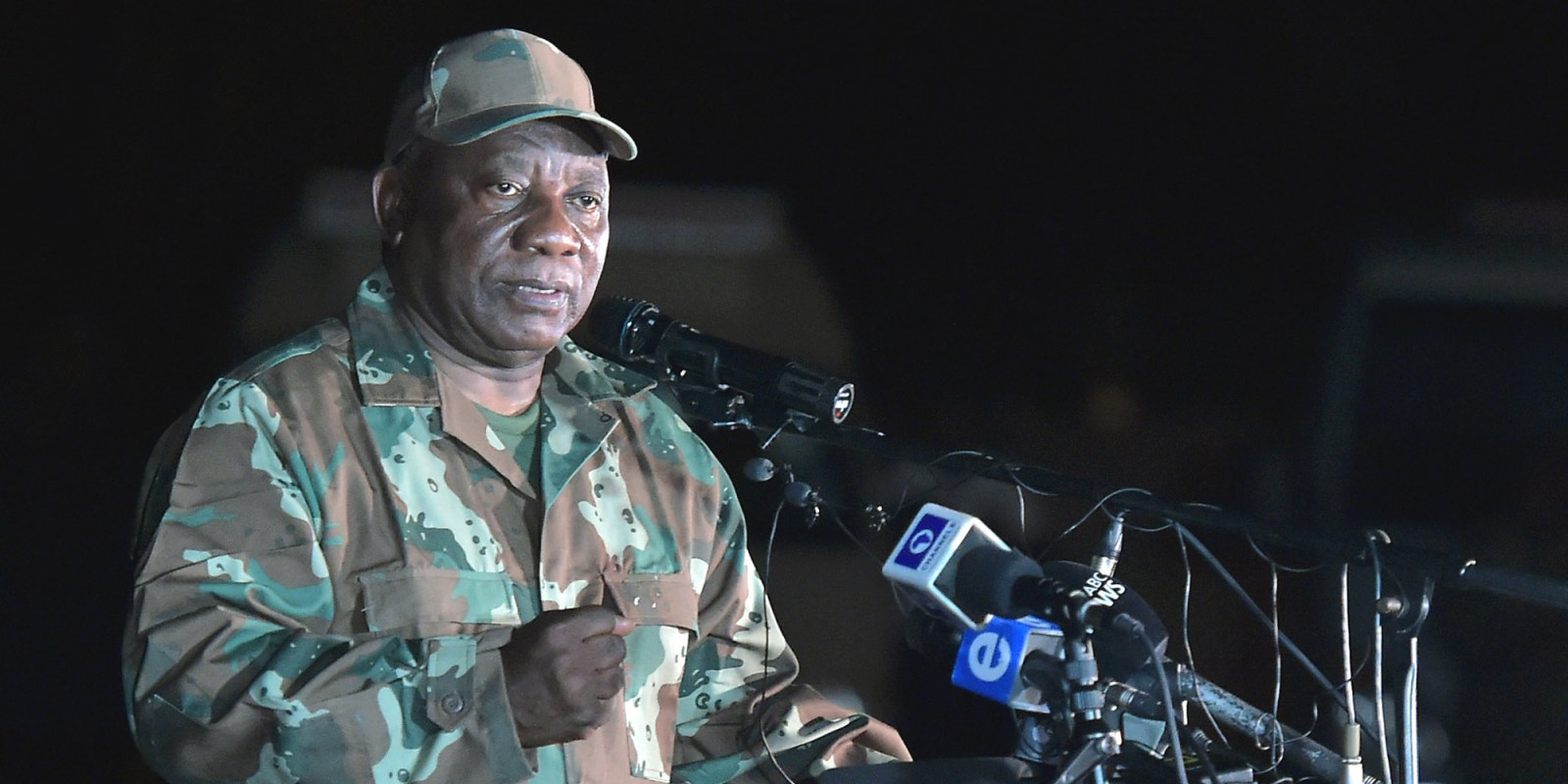 President Cyril Ramaphosa said in his address to mark National Armed Forces Day on Sunday that the SANDF had performed ‘invaluable work’ during the national Covid-19 response. (Photo: Flickr / GCIS)

On National Armed Forces Day, President Cyril Ramaphosa urged members of the South African National Defence Force to ‘pick up the spears’ of the heroes of the SS Mendi and ensure ‘lasting peace, security and stability in our country’. Speaking at the Castle of Good Hope in Cape Town, he thanked the military for its assistance during the Covid-19 lockdown and added that ‘we know’ it will take action against any member who violates laws or rights.

The day was commemorated without the usual parades and demonstrations because of Covid-19 regulations and safety. This year, the president was joined by a select few military representatives at a wreath-laying ceremony at the Castle of Good Hope in Cape Town.

National Armed Forces Day pays homage to the 616 South African volunteer soldiers who died when the SS Mendi sank in the English Channel in 1917. It is also a day that highlights the military’s contribution to South Africa.

The highest ideal of which the soldiers on the SS Mendi “lived and died for” remains as true as ever, said Ramaphosa. “You who have the honour of being members of our armed forces gathered here and elsewhere around our country must pick up the spears of these heroes and heroines in our effort to give our people lasting peace, security and stability in our country.”

He commended them for maintaining “law and order in the early days of lockdown”, as well as deploying 33 companies in less than 72 hours. He mentioned their “mercy missions” to repatriate citizens abroad, the army engineers corps assistance in delivering clean drinking water and the military health service for working in hotspots to set up field hospitals.

Ramaphosa thanked them for continuing to be the “foremost forces of development as well as progress” by conducting disaster rescue missions, building bridges and rehabilitating polluted rivers.

“But what perhaps touched us as a nation most was the sight of SANDF members helping the elderly carry their groceries and walking alongside young people making their way home and many other instances showed our armed forces at their very best,” he said.

“We know the SANDF to be a disciplined force. We know the SANDF will not accept any actions by any of its members which violate the laws of our country or the rights of our people. We know that where there are transgressions, it will act against those who are responsible.”

Almost 3,000 soldiers were deployed in March 2020 to assist the South African Police Services with implementing lockdown regulations and a few months later another 73,180 were added.

The night before lockdown began, Ramaphosa told soldiers to act with humility and compassion and to make sure rights were protected. Later that evening, Defence Minister Nosiviwe Mapisa-Nqakula said, “It will only be skop, skiet en donder when circumstances determine that. For now, we’re a constitutional democracy.”

By June 2020, the Military Ombudsman had received 32 complaints from the public about the conduct of soldiers during lockdown – one of which was the assault and killing of Collins Khosa. Before this, the ombudsman dealt mainly with member complaints about conditions of service.

The Other Epidemic: An account of police and army violence in the Covid-19 pandemic

Ramaphosa also saluted the soldiers who died of Covid-19: “They are heroes who died in the line of duty. We honour and salute them because they were prepared to lay down their own lives so that all of us as South Africans can live. We owe them a debt of gratitude and convey our deepest condolences to their families and loved ones.”

He wished the armed forces well on behalf of “all the people of South Africa”.

This is the eighth year that South Africa has commemorated National Armed Forces Day.

Armed Forces Day is meant to educate people about the role, function and capabilities of the defence force. It is also to “showcase the latest military equipment and technologies that are used to protect the public” and to show “military combat readiness”.

It pays homage to the 616 South African volunteer soldiers of the South African Native Labour Contingent who died on this day in 1917. The soldiers were bound for the French frontline during World War 1 and had just sailed from England. They were aboard the military steamship SS Mendi when it was struck at full speed by a much larger ship, which kept going.

The soldiers, foreseeing their fate, reportedly gathered on deck and began to sing and perform a death dance. This courage is commemorated by the Order of Mendi for Bravery, awarded to a person who placed their own lives in danger in order to protect those of others. This was awarded to nine-year-old Thapelo Tambani in 2019, who drowned after saving the life of his friend, Mulalo Sien Muelelwa. DM