Temporary housing relief for some of the 4,000 displaced by Masiphumelele fire 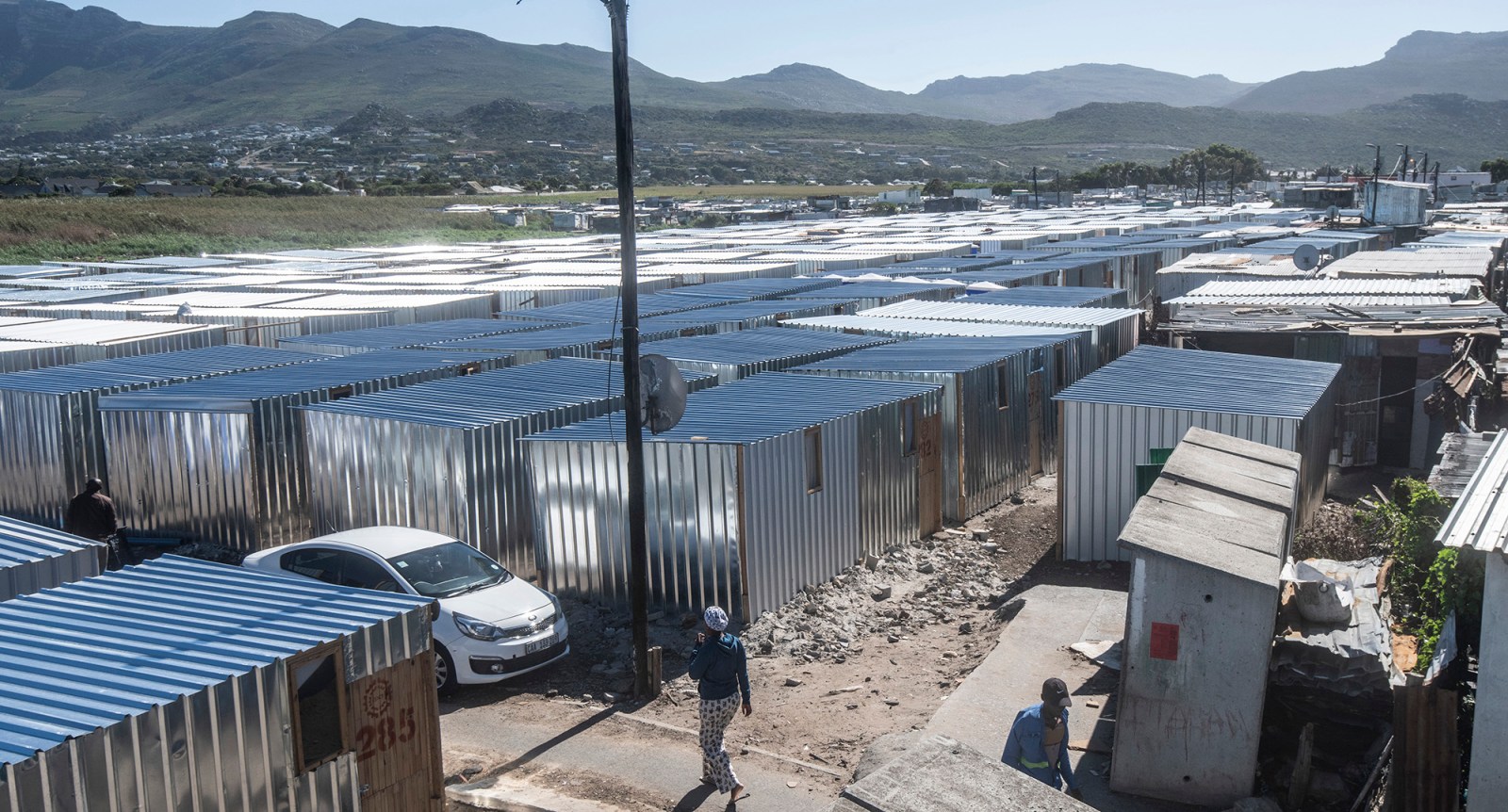 Four hundred emergency homes have been erected after a December 2020 blaze in Masiphumelele, Cape Town displaced about 4,000 people. To date, 321 homes have been handed over to fire victims. (Photo: Gallo Images / Brenton Geach)

On Tuesday 16 February, the Western Cape MEC for Human Settlements, Tertuis Simmers, visited Masiphumelele, Cape Town, and spoke to some of the recipients of the 400 emergency structures that have been erected since a December blaze.

It has been two months since a fire ripped through B-Section of the Masiphumelele informal settlement on 17 December last year, destroying more than 1,100 homes and displacing about 4,000 people.

To date, 400 temporary emergency structures have been erected, with 321 of those given to affected residents. The balance of 79 structures will be handed over to displaced people this week.

On Tuesday, the Western Cape Minister of Human Settlements, Tertuis Simmers, accompanied by officials from the City of Cape Town, visited residents of Masiphumelele who have taken occupation of temporary structures.

Simmers said the remaining displaced residents will be relocated to a nearby sports field in the interim, and the construction of more temporary structures on the field will commence in the coming week.

This was the “original agreement” between community leaders, the National Department of Human Settlements, Water and Sanitation and the Housing Development Agency, to ensure that everyone is accommodated, said Simmers.

A razor-wire fence has been erected on the wetland boundary to protect the wetland and ensure houses are not flooded during the winter, Simmers’ spokesperson, Marcellino Martin, told Daily Maverick. The temporary structures have been erected further from the wetland.

The construction of the structures began in late January, and  “32 chemical toilets have been delivered and installed, with a further 40 to be delivered this week”, according to a Western Cape government statement on 16 February.

“There are also 16 standpipes in the area, so that residents have access to water.”

The temporary structures are scheduled for completion by the end of February to mid-March, said Simmers. A permanent solution is being worked on with the City of Cape Town.

“We’ve commenced with statutory processes, and upon conclusion we will commence with long-term housing solutions for the most vulnerable and qualifying residents, by providing permanent shelter through the use of Sustainable Building Technology (SBT),” said the statement.

Those who have received a temporary structure have been given certificates by the City of Cape Town, proving that they have received the structures, and confirming they will receive permanent housing at a later stage, said Simmers.

“We will move them block by block. Once again, a similar strategy, first the elderly and people with disabilities, and then the rest.”

Masiphumelele resident Ziyanda Bambeni, who received one of the emergency structures, said she was “very happy” with her temporary home.

Since losing everything in the fire, Bambeni and her two children have been staying with a friend.

Her previous home was smaller than the temporary house, Bambeni said.

Another Masiphumelele resident who recently received a temporary unit, Sinovuyo Mbana, expressed concern about residents who have not yet received a permanent structure and are “causing some trouble” in the community.

Mbana lives in the temporary house with her husband and four children, one of whom is disabled. She said she will be allocated a permanent structure later on.

Mbana said residents are questioning the city’s allocation of the temporary structures, with people born in “1992 and 1991” already receiving housing.

For years, residents have been asking for adequate housing and to be relocated from the “difficult living conditions” in the informal settlement that surrounds the wetland, GroundUp reported.

“When the fire occurred in December, and the agreement was to erect temporary structures, it was explained and agreed upon with the community leaders that it would be done in a structured manner,” said Simmers.

It was agreed that the elderly and people with disabilities would be catered for first. The affected community members were encouraged to give their details to their local city council office, to ensure the first beneficiaries fell in these categories, Simmers explained.

However, many elderly people “did not apply to be on the beneficiary list” and the city is looking at “alternative ways to address that”.

The names of those who must still receive a structure will be listed on the subcouncil office doors, at the local police station, Living Hope NGO and at the Masiphumelele community centre, said councillor and subcouncil chairperson Patricia Francke.

Tension at the sports ground

During the minister’s visit to Masiphumlele on Tuesday, a number of private security guards patrolled the fence surrounding the structures, and about 15 were present at the local sports field.

“When we commenced with the erection of the temporary structures, the city, through my department, [hired] a private security company to ensure the land isn’t invaded,” Simmers told Daily Maverick.

According to one security guard, who asked to remain anonymous, some individuals from the community began constructing temporary structures on the sports field early on Monday.

Soccer players instructed them to leave and the structures were removed later that day, he said.

When asked about this incident Francke said, “there were no structures destroyed”. DM