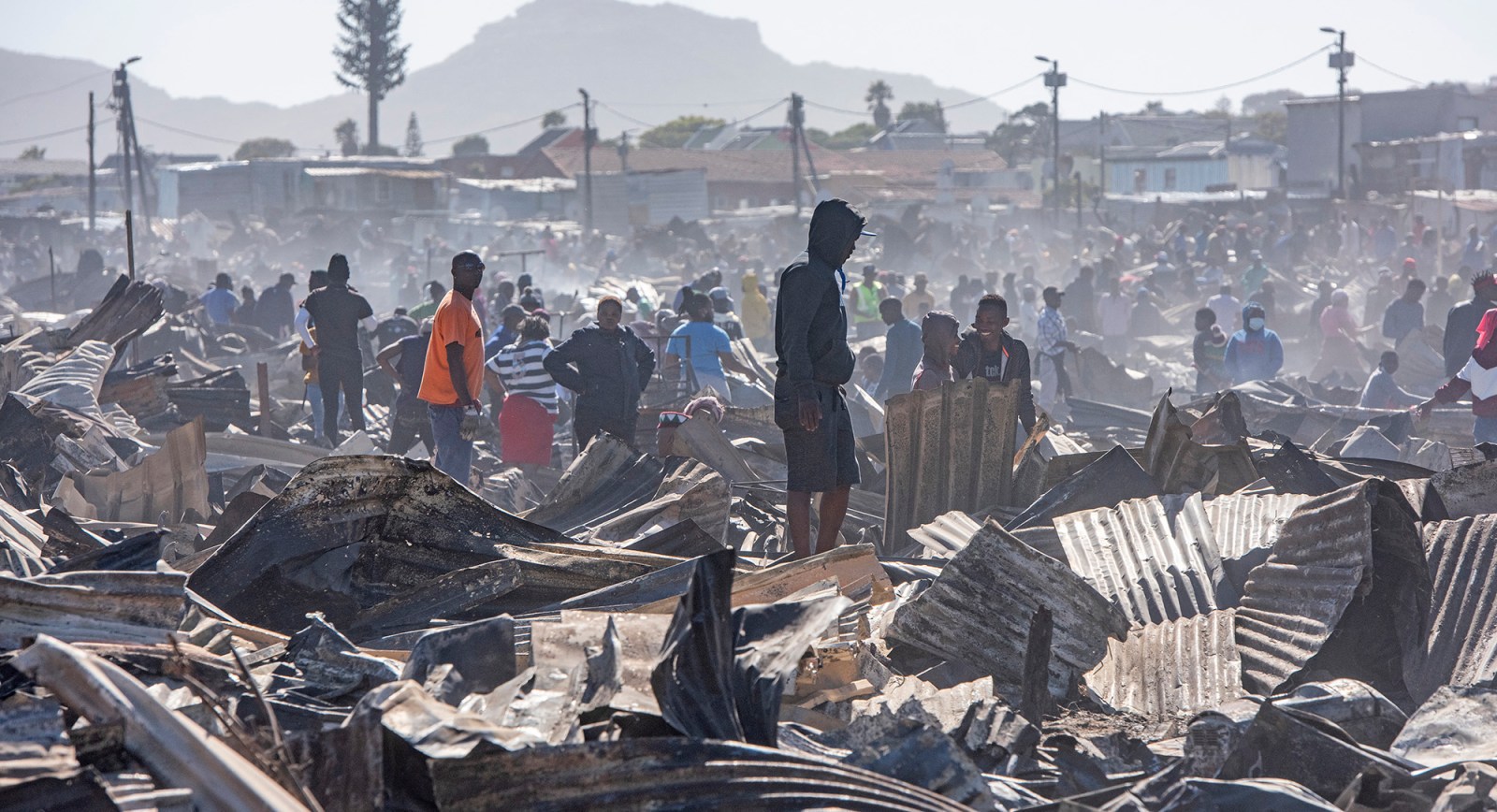 The aftermath of the fires that destroyed thousands of shacks in Masiphumelele on 18 December 2020 in Cape Town. According to media reports, no one was injured or killed in the disaster and the cause of the fire is still being investigated. (Photo: Gallo Images / Brenton Geach)

About 1,030 shacks burnt down and 4,000 people were affected after a ‘devastating’ blaze broke out in an informal settlement in Masiphumelele, just off of Kommetjie Road in the south of Cape Town on Thursday.

“We were running. We were running for our lives,” says Nyathi, whose home burnt down in a fire which devastated an informal settlement in Masiphumelele, in the south of Cape Town on 17 December.

Nyathi, who asked to be referred to only by her surname, is one of over 4,000 people who are now displaced after the fire, fuelled by strong winds, destroyed over 1,030 homes, the City of Cape Town told Daily Maverick. “This fire is devastating. It is something that is almost unimaginable,” said John Thomas of the NGO Living Hope, which provides community development, social and health programmes in the area.

Video of Masiphumelele fire taken by Wandile Mdayi on 17 December 2020.

The fire broke out on Thursday afternoon at around 3pm, according to Nokuthula Ngwandi, a resident whose home was among those destroyed by the blaze.

The City of Cape Town’s Fire and Rescue Service were alerted to the “plume of thick black smoke” at around 4pm, reported Daily Maverick overnight. The Masiphumelele fire was extinguished on Friday at 1am, according to Jermaine Carelse, the city’s fire and rescue service spokesperson. Crews are monitoring the area for any flare-ups. No injuries were reported, Carelse said.

According to Thomas, the fire spread in B-Section, which is fairly close to the wetlands. The cause of the fire is still unknown, Thomas said.

Residents on Friday gathered where their homes stood, trying to salvage what was left. They are trying to rebuild to have a place to stay a week before Christmas.

“People are trying now to rebuild their homes before Christmas,” Nyathi said. According to Nyathi, she and her brother were staying at her mother’s home in another part of Masiphumelele, until their home is rebuilt.

Naythi spoke on behalf of her brother, who asked to remain anonymous as he picked up wooden planks and materials from around the rubble, and used a measuring tape to map out the area where their home once stood.

According to Nyathi, the fire brigade came but “they didn’t manage … the fire was out of control”.

Nyathi’s husband was not at home when the fire started but she and her children were. “This is my husband’s house, he was not here … he was at work,” she says.

Sorting through a wreckage

“We lost everything. We have nothing now,” said Mildred Murandu, standing just a few steps away from a pile of debris that used to be her home. “So we are trying to rebuild again. There is no other way,” Murandu said, as her neighbour Prince Sithole stood beside her.

Sithole says that no one had time to try and save their belongings. Everything was destroyed.

Video of Masiphumelele fire being waterbombed taken by Wandile Mdayi on 17 December 2020.

“We just run away; we save our lives,” he said.

Most of the community had spent Thursday night at a community hall and would return to the hall again on Friday evening.

“We are thinking, what are we going to eat? Where are we going to sleep? There is no privacy there in the hall. We have no clothes, no nothing,” said Nokuthula Ngwandi, who was at her cousin’s home when the fire broke out.

When Ngwandi returned to her home, the structure had already burnt down.

Ngwandi was not the only one who came home to find everything she had destroyed. Another Masiphumelele resident, Noluvo Thomas, came home from work to find her home ablaze.

“I can’t tell you what really happened because I was at work … I just came home to find that my home was burnt down,” Thomas said.

“We lost everything because we didn’t have any chance to still look what is there to save,” she said. “What can I do now? [I] don’t have a place to sleep, don’t have anything.”

According to Ngwandi, people are picking up what they can find in the wreckage but even if residents find their belongings they could be stolen without a safe place to store them. People are destitute and desperate, she said.

“So what’s the use of taking your belongings that are left over?” she asked.

Living Hope is asking for people to help the situation, according to Thomas. Help is needed in volunteers, clothing, bedding, food, he informed.

“Donations can be dropped off at any time, at Living Hope on Kommetjie Road, opposite Masiphumelele,” he said.

In the last five years, there have been at least five fires in the Masiphumelele area. In 2019, a fire in the area burnt down 100 homes and one person died in E-Section in the informal settlement. The 2019 fire was caused by a candle in one of the shacks, according to residents. A fire in 2015 killed two residents and left 4,000 displaced. DM