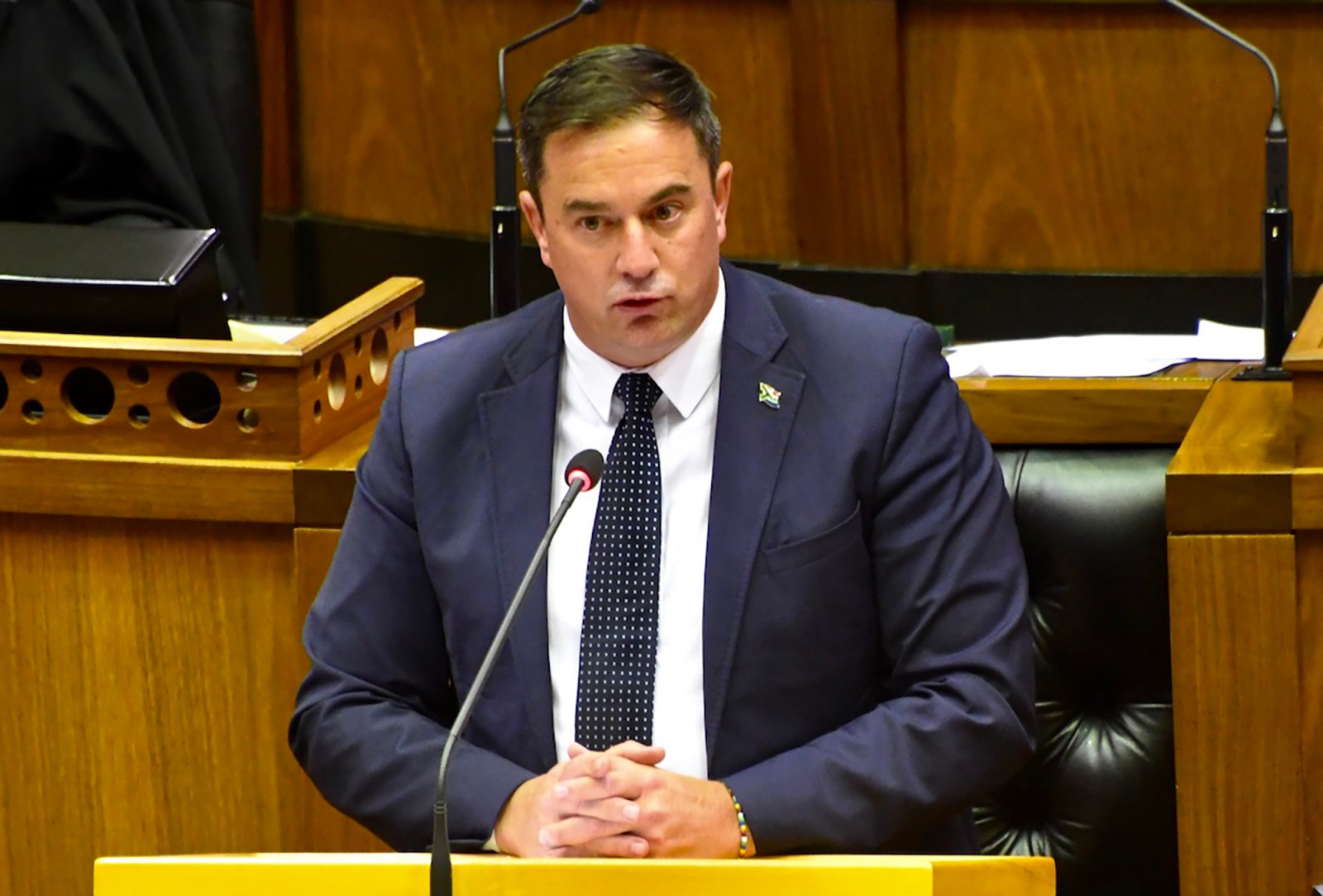 Even The Beatles were invoked when DA leader John Steenhuisen quoted these lines at the president: ‘He’s a real nowhere man, sitting in his nowhere land, making all his nowhere plans for nobody…’

Opposition parties lambasted President Cyril Ramaphosa for his leadership – from a flagging economy, Covid-19 vaccines confusion to corruption – on Tuesday, Day One of the parliamentary debate on the State of the Nation Address.

But, curiously, opposition parties went mild on ex-president Jacob Zuma’s refusal to obey a Constitutional Court order to appear before the State Capture commission on Monday – and the governing ANC’s silence on what was in effect Zuma’s brush-off of its decision to support the commission and to “unreservedly urge” members to cooperate.

Back from a refreshing cuppa with Zuma, EFF leader Julius Malema let rip with a lot of chatter and allusions to historic gossip about Ramaphosa. Not so delicate were references to the president as a lackey to the usual list of white monopoly capital, the Oppenheimers, Ruperts and “all the other white people who played a central role in buying the conference of the ruling party in 2017”.

Malema joined the Parliament debate online, seated on a chair in front of dark wooden panelling and flags, including that of the African Union. The set-up echoed those of Ramaphosa and his deputy, David “DD” Mabuza, when they joined the House.

Describing the president as “incompetent, incapacitated and the most unreliable human being” and cautioning that Ramaphosa would not complete his term, Malema listed failings from rising unemployment, worsening economy to years of delay in, for example, the 2018 promised spectrum action to boost broadband.

“There is honestly nothing to celebrate under your leadership. The reality is that the conditions of our people are getting worse, and whilst corona has worsened them, it is still not to blame for your general incompetence.”

DA leader John Steenhuisen did not play nice about Ramaphosa’s leadership failures, but did hold out a hand to cooperate on getting South Africa out of its quagmire.

Announcing a series of draft laws on anything from fiscal responsibility to cheaper energy and labour reform, Steenhuisen turned to the ANC benches, saying they could rewrite, amend and put their own names on the legislative proposals or even turn these into committee bills.

“It doesn’t matter about the name on the bill, it matters that we deal with the things that hold back our country. There have to be 85 good men and women on the ANC benches who want to do the right thing. We are here to lend you a hand, to help you do right by the country rather than your party.”

It was a clever way to increase pressure on the ANC, and continued the DA’s party vs country rhetorical challenge to the governing party. That’s set to be a refrain in this election year ahead of the municipal poll between August and early November.

But a goodwill gesture does not mean holding back on the sharp tongue about issues ranging from a shackled economy to corruption, and presidential promises of action that seem not to have changed since 2018.

“On every single issue in his Sona speech there was a gulf as wide as the Karoo sky between what he promised and what his government is either able or willing to deliver.”

“Corruption is endemic in the ANC, and there is little President Ramaphosa can do about it, because he doesn’t seem to hold any of the aces here.”

And that presidential helplessness was rammed home when Steenhuisen quoted The Beatles: “He’s a real nowhere man, sitting in his nowhere land, making all his nowhere plans for nobody…”

Even the mildly spoken, and very much protocol-observant IFP president emeritus, Mangosuthu Buthelezi, presented a sharp-edged critique, cautioning that the South Africa that went into the Covid-19 pandemic was already in crisis.

“The problem… is the same problem I pointed to in last year’s debate. The problem is corruption. I know it. You know it. South Africa knows it.”

Aside from Steenhuisen, Freedom Front Plus leader Pieter Groenewald picked up on the ANC kid gloves for Zuma refusing to appear before the State Capture commission.

He cautioned Ramaphosa against even considering a pardon for Zuma.

“The only space Zuma needs is the space provided by a prison cell. The only time he needs is a couple of years as determined by a judge. That will be ample time for him to think.”

Mkhize turned his debate contribution into another one of his webinars at which he has taken to make Covid-19-related announcements, and emphasise how South Africa is setting the lead.

“Our risk-adjusted response and differentiated approach to hotspots has given lessons to other countries that adopted the same approach we pioneered. Our centralised response strategy through the National Coronavirus Command Council became a model that was cited as one to emulate throughout the globe.”

Mkhize reiterated that the AstraZeneca vaccine doses that proved ineffective against the South African strain had been offered to the African Union to distribute.“Therefore, please be assured there will be no wasteful and fruitless expenditure.”

With the vaccination of some of the 1.2 million healthcare workers with the 80,000 doses of Johnson & Johnson vaccine about to get under way for the next two weeks, Mkhize told MPs that 380,000 healthcare workers had registered for inoculation on the mandatory online portal.

The ANC debate inputs seemed disconnected, and came across as ministerial to-do lists.

A disruption came from the EFF, who spoke over everyone on various points of order after Malema was cut after 21 minutes’ speaking time. He was meant to speak for 42 minutes as EFF MPs had donated their time to him, and after a while proceeded, even if not quite for the full 42 minutes.

ANC Chief Whip Pemmy Majodina, who opened Day One of the Sona debate, drew the line about her party’s parliamentary caucus performance.

“No member of the ANC has ever been instructed to cover up corruption,” she said, triggering one of the few moments of applause in the almost four-and-a-half-hour debate.

Oversight was sustained in trying circumstances, said Majodina, adding no stone was left unturned to hold to account those responsible for corruption.

“We, therefore, reject the narrative that the ANC caucus has sought to micromanage committee members and prevent them from performing their duties. That is blatant lies.”

The ANC chief whip’s comments, unconnected in any way as they were to the presidential Sona, signal how sensitive the governing ANC is over the State Capture commission testimony earlier in February on the at best lukewarm parliamentary oversight, particularly by the ANC caucus.

Wednesday is Day Two of the parliamentary Sona debate, followed by Ramaphosa’s opportunity to have his final say.

And what he says then may matter more than the actual Sona address. DM