THE DEPARTMENT OF ‘CAN’T BELIEVE WE HAVE TO EXPLAIN THIS’ 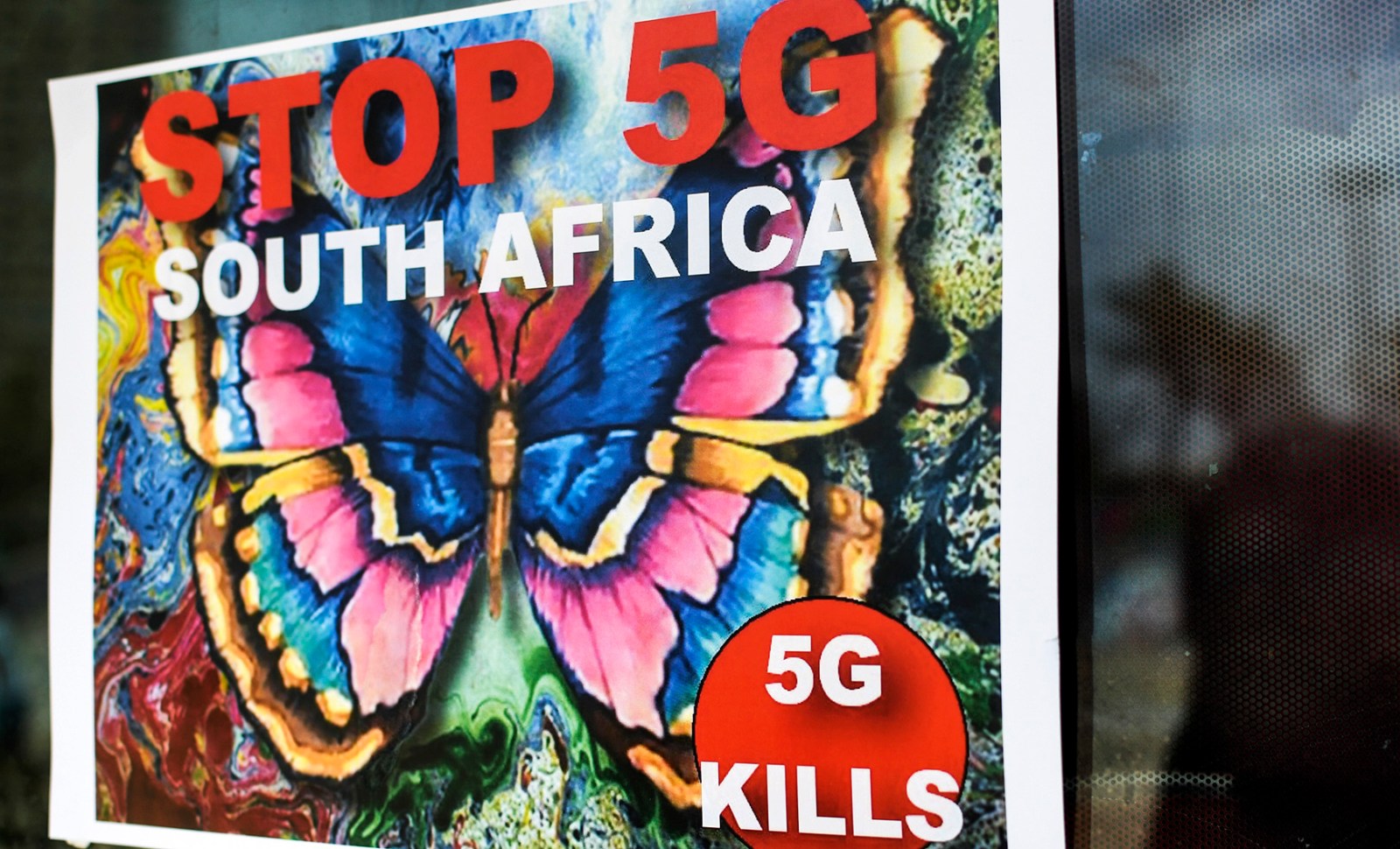 Unfounded theories linking 5G towers and the emergence and spread of Covid-19 have spread worldwide – including South Africa. The Council for Scientific and Industrial Research has debunked these theories by explaining the latest research.

The snail-paced roll-out of 5G technology around the world has been accompanied by a much faster spread of pseudoscience, fake news and misinformation that the radiation could cause anything from a headache to cancer. Now, these theories have incorporated Covid-19 and vaccines – and they’ve reached South Africa.

Deeply concerned about these false claims, South Africa’s “central and premier scientific research and development organisation”, the Council for Scientific and Industrial Research, held a briefing to dispel them. On Monday 8 February two of its top researchers explained how 5G works and one by one dispelled the most prominent myths.

Since the 1980s, mobile wireless technology has been improving in what it is capable of doing and at what speed. In every decade since then, the global scientific community has been formulating standards and technical rules for how the network operates and labelling it a technology “generation”.

These standards are “highly regulated”, said Dr Fisseha Mekuria during the briefing. He is a lead researcher at the CSIR in wireless computing and networking.

He said the process begins when a research lab designs a new technology. It is then peer-reviewed at a global level. It is formulated into a standard by international associations after being trialled using different applications – like smartphones or drones, for example.

“This makes sure we have checks and balances. These technologies do not go commercial before it goes through this process,” he said.

The first generation – or 1G – was mostly analogue and made voice services possible anywhere in the world. Subsequent generations introduced and improved the use of text, data, multimedia and internet communications on mobile networks and supported new applications like smartphones. To make this possible, new “frequency areas” were allocated specific services, such as broadcasting, mobile phones or sea radios. This also meant more people could use their device at the same time to do the same thing, like make phone calls.

5G is the fifth generation of this mobile wireless technology standards and was first used in 2019. It comes with a new set of frequencies for mobile phone networks which have been used in other applications, such as point-to-point radio links. The technology ensures that more data can be exchanged more quickly, latency will be low and communications much more expansive, said Mekuria.

He explained that the quicker exchange of data will allow for new applications to be supported, such as ultra-high definition video, holograms communication and augmented or virtual reality.

In addition, 5G will make ultra-low latency possible. This means it will minimise the delay in the transfer of data after an instruction has been given. This will support the use of robotics, drones and self-driving vehicles.

However, 5G is yet to be rolled out worldwide and is patchy in the countries where it already exists. It is expected that the standards will be finalised in the next year – only then will the work on a wide-scale roll-out begin. New and more masts and transmitters will be needed, as it will operate at a higher frequency and will cover shorter distances.

This new generation of technology has led to the rise of a conspiracy theory that an array of health problems – from headaches to cancer – are caused by 5G because it works on a higher frequency. Recently, theories have emerged arguing that 5G is linked to the Covid-19 pandemic.

This has gained such traction in South Africa that four towers were torched in KwaZulu-Natal in January. As a result, the minister of telecommunications and digital technology held a press conference with MTN, Vodacom and Africa Check to say there is no scientific evidence to back the theories. A few weeks later, the provincial government launched an awareness campaign to dispel these theories.

The CSIR felt it necessary to provide the public with an update about the latest research on 5G and Covid-19. Dr Essa Suleman led this section of the briefing. Suleman is a senior researcher at the CSIR in veterinary molecular diagnostics and vaccines.

He said there have long been claims that 5G causes cancer, skin effects, male infertility and eye problems. These are unfounded and are based on pseudoscience, misinformation or fake news, he said.

Most of the studies are done under very specific lab conditions, which don’t reflect real-world conditions accurately, and use electromagnetic frequency levels which are much higher than those emitted from 5G equipment in the real world.

Another claim is that 5G has caused the virus to mutate. Suleman explained that 5G does not penetrate the skin and that Covid-19 is found in the respiratory system. “5G does not have the energy to cause mutation of the virus,” he said. Mutation happens randomly as the virus replicates and spreads.

More research under real-world conditions is needed “as a precaution” to confirm there is no significant threat to human health, he said.

Suleman noted that conspiracy theories linking 5G and Covid-19 are now “widespread”, but, as with the more general claims, they are based on pseudoscience.

The first theory was that the radiation from the 5G towers would weaken the immune system and result in an increased susceptibility to Covid-19. The thinking goes that exposure would result in higher numbers of people becoming ill with Covid-19. Suleman said this theory has similarities to the claims that sustained exposure would cause cancer – “there’s a trend”.

Another is that 5G produces the virus itself. The claim emerged when a study was published which supposedly proved the claim that radiation from 5G towers entered the body through skin cells and triggered the production of a “virus-like structure” which would make a person sick. It effectively claimed Covid-19 was “not real”, said Suleman. A few days later, the journal retracted the paper because of evidence that the authors had manipulated the peer review process. The claims were based on pseudoscience.

It then emerged that the authors were an international group of scientists who seemed to be well-credentialled. They had been publishing in “obscure journals” and racked up hundreds of articles. The majority didn’t make sense and were retracted.

Another claim is that the distribution of Covid-19 cases mirrors the rollout of 5G towers, therefore the towers are to blame. Suleman debunked this theory by pointing out that there are numerous countries which have none of these towers but significant caseloads – there’s no correlation.

Another claim is that 5G has caused the virus to mutate. Suleman explained that 5G does not penetrate the skin and that Covid-19 is found in the respiratory system. “5G does not have the energy to cause mutation of the virus,” he said. Mutation happens randomly as the virus replicates and spreads.

The last prominent theory is that a Covid-19 vaccine will carry 5G chips which will be injected into people and used by the government to spy on them. This theory emerged on Twitter in December 2020 when a post claimed to show a circuit diagram of a 5G chip that would be used in Covid-19 vaccines – but this was later revealed to be a circuit diagram of a Boss guitar pedal and had nothing to do with vaccines, said Suleman

Suleman ended by asserting once again: “These are all false [theories] and there is no evidence to support these claims.” DM/MC