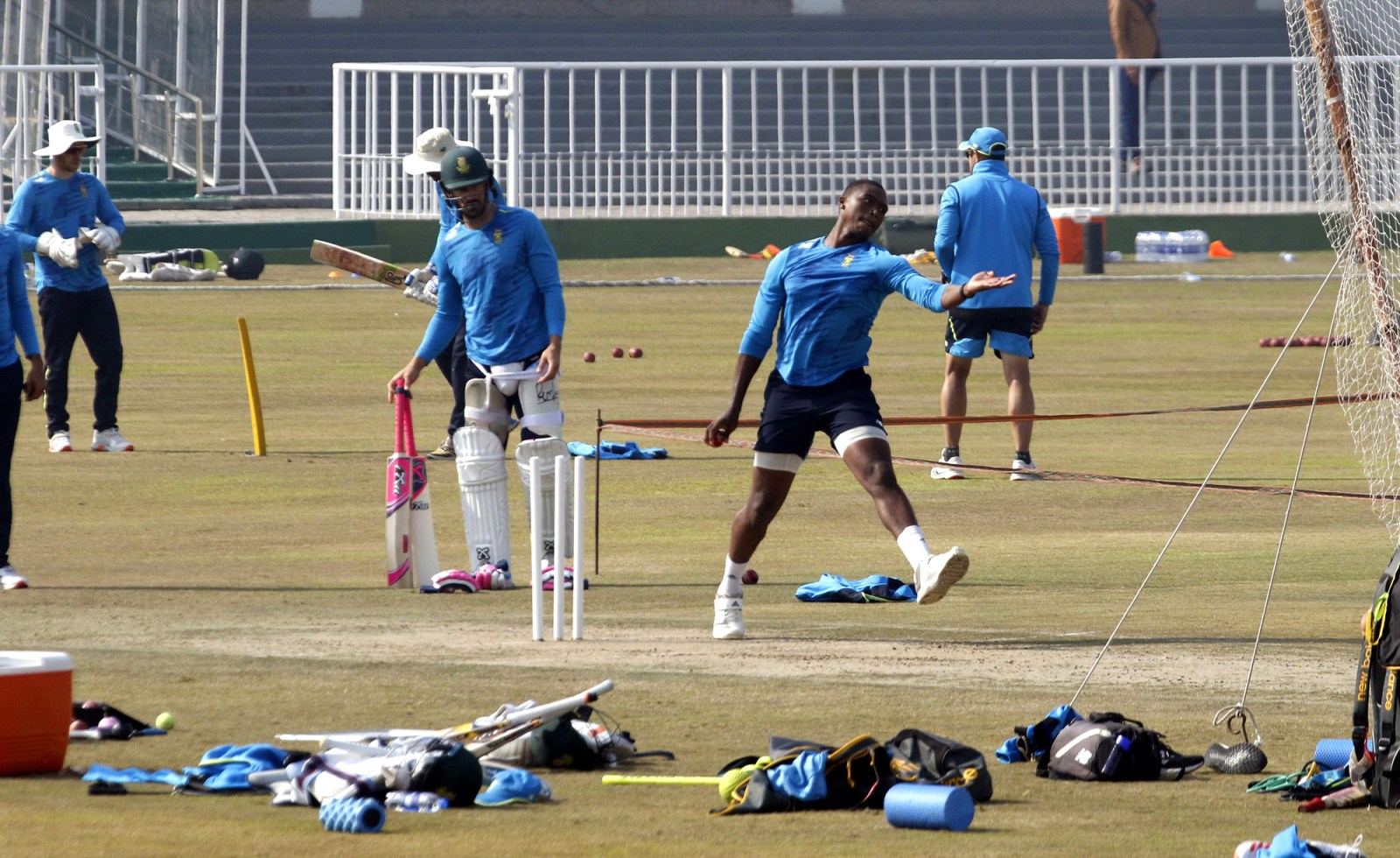 Lungi Ngidi of South Africa at a practice session before the second cricket Test against Pakistan in Rawalpindi. (EPA-EFE / Sohail Shahzad)

The second Test between Pakistan and South Africa in Rawalpindi, starting on Thursday, was supposed to be the final mouthful of an hors d’oeuvre before the summer’s focal point against Australia back on home soil.

Rawalpindi, unexpectedly, represents the Proteas’ last scheduled Test of the year after Australia backed out of their scheduled March South African tour at the 11th hour on Tuesday, citing fears over Covid-19 as a reason.

Proteas coach Mark Boucher made all the right noises about the team being focused on the immediate challenge of facing Pakistan, especially after they lost the first Test in Karachi by seven wickets. But Australia’s feeble withdrawal after Cricket South Africa (CSA) had met every one of Cricket Australia’s (CA) demands, has left a hollow feeling.

“It’s [Australia’s postponement to tour South Africa] not a disruption for us in Pakistan; we are focused on what we have to do here,” Boucher said on the eve of the second Test.

“But it is certainly a disappointment for the players. We had made a lot of plans and there was a lot of logistical planning for the Australia tour and a lot of goalposts had been moved to accommodate them.

“For example, we [the Proteas squad] had to move out of the hotel we stayed in against Sri Lanka. It was a great hotel and suited our needs, allowing us to be outdoors. We even surrendered that and there was a feeling we were laying down the red carpet a bit for Australia, which was frustrating at times. And after all of that, they postpone.

“It’s a bit disruptive to our future plans but right now, the focus is on trying to level this series.”

Rawalpindi is now the high point of the season

The Pakistan series was supposed to serve as a starter before the main course of facing the Baggy Greens back on home soil. Instead, it has become the complete three-course dinner of South Africa’s Test season.

After swatting Sri Lanka aside on home soil in a two-Test series, South Africa knew that the Pakistan experience would examine their skills and mentality in new ways. Whatever they have already learnt, and what they will absorb in the coming five days, will have to be stored in the memory banks for a long time, because after Rawalpindi, more Test cricket is a long way off.

In isolation though, the Rawalpindi showdown is a salivating prospect, especially after an enthralling first Test, which the home team dominated. However, there was always a nagging sense that the Proteas were not far off putting Pakistan under pressure. If they have learnt from their failings in Karachi, Rawalpindi could be a fantastic contest.

“If you look at the history of this ground it’s more seamer friendly – and past results tell us that as well,” Boucher said. “When we got here three days ago there was a lot of grass on the wicket, but it has been taken off and now the surface of the pitch looks really dry.”

It has left Boucher with some head scratching to do about the composition of his team. Rawalpindi has favoured quick bowlers in the past, but the state of the pitch is sending mixed signals to the Proteas camp.

There is also the added problem of senior spin bowler Keshav Maharaj struggling with a rib issue while wrist spinner Tabraiz Shamsi, who missed the first Test with a back spasm, is still 50/50 to play in Rawalpindi. Even if Shamsi is cleared to play at the start of the match, can he make it through five days? Boucher admitted, “It’s a massive red light for me.”

George Linde’s spin was ineffective in Karachi, and he could miss out with all-rounder Wiaan Mulder returning to the side after a strong series against Sri Lanka. Mulder’s medium-pace swing bowling would be useful and his solid batting will shorten the Proteas’ long tail.

Of equal concern will be the ability of the batting unit to deliver a big first-innings score. After winning the toss and scoring only 220 in the first innings in Karachi, South Africa gave the initiative to the home team.

While Pakistan bowled well, the Proteas had two of the top six run out, while captain Quinton de Kock was dismissed playing a poor shot.

In the second innings, South Africa lost seven wickets for 87 runs after Aiden Markram and Rassie van der Dussen had taken the score to 175 for one. That collapse allowed Pakistan to chase a modest 88 for victory.

“Hopefully, the guys have learnt their lesson by watching how Pakistan played, and from our mistakes,” Boucher said. “I think the mental preparation going into this game has been good because they’ve witnessed it and seen how Pakistan have played, and how to put a big score together.

“There’s a lot more care about keeping their wickets and a lot more intensity when they defend; not so many shots in the nets. You can talk as much as you can. Sometimes they’ve got to see it to believe that’s the way to go about building innings in subcontinent conditions.”

Pakistan have confidence and form, and are on the brink of a third consecutive home series win after beating Sri Lanka and Bangladesh. Taking the Proteas’ scalp would be their best result yet, since the return of Test cricket to the country after almost a decade in the wilderness over security concerns. DM