Australia back out of SA tour over ‘unacceptable’ C...

Australia back out of SA tour over ‘unacceptable’ Covid-19 risk 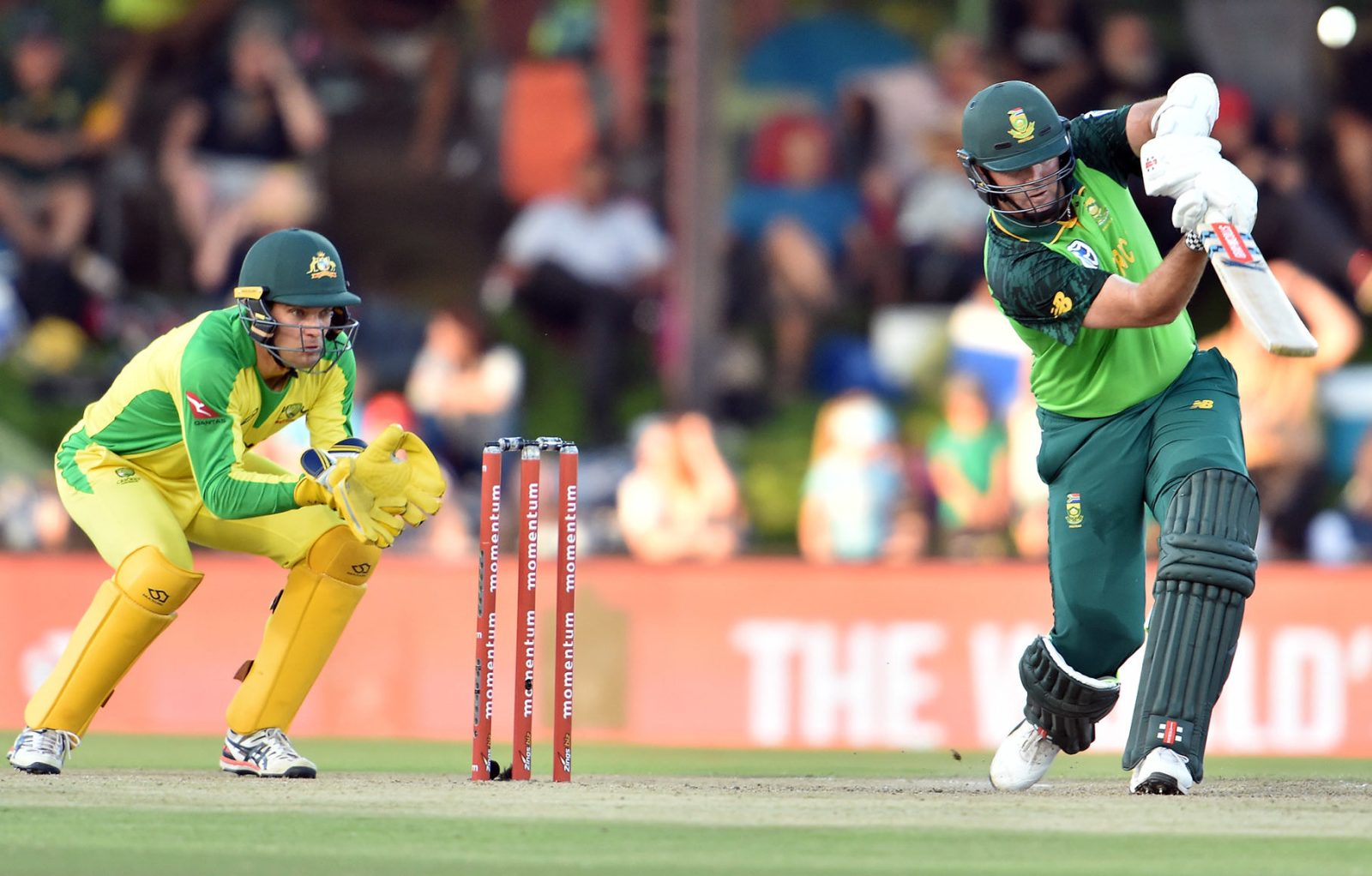 JJ Smuts of South Africa during the 2nd One Day International match between South Africa and Australia at Mangaung Oval on March 04, 2020 in Bloemfontein, South Africa. (Photo by Johan Pretorius/Gallo Images)

A little more than 12 hours after President Cyril Ramaphosa announced a plunging rate of Covid-19 cases, Cricket Australia called off its men’s tour to South Africa.

In a shocking but unsurprising move, Cricket Australia (CA) announced on Tuesday it was pulling its men’s team out of a scheduled tour to South Africa over Covid-19 fears.

Cricket South Africa (CSA) is understandably upset and angry, having “bent over backwards to accommodate CA’s changing demands”, a source told Daily Maverick. CSA’s board was gathering on Tuesday afternoon and would comment afterwards.

The scheduled three-Test tour has officially been “postponed” and no date has been set for when it will take place.

It’s particularly disappointing when other countries are willing to shoulder some inconvenience to ensure major sporting events happen. British and Irish rugby players are willing to do whatever it takes to be part of the Lions tour to face the Springboks this year, while hundreds of athletes are ready to endure rigorous Covid-19 protocols to ensure the Tokyo Olympics can go ahead.

This week, it was reported in a local newspaper that Australia’s pampered cricketers complained about “intense” coach Justin Langer’s “micromanagement”.  It seems that having to remain confined to the five-star Irene Lodge, with a golf course and many other sporting and leisure facilities at its disposal, was too much for a team usually renowned for mental toughness.

The decision to postpone the tour is sure to heap more financial pressure on CSA, which saw England’s One-day-International tour in Cape Town last November cut short over Covid-19 fears.

“Due to the public health situation in South Africa, which includes a second wave and new variant of the virus, and following extensive due diligence with medical experts, it has become clear that travelling from Australia to South Africa at this current time poses an unacceptable level of health and safety risk to our players, support staff and the community,” he said.

“We acknowledge the significant amount of work by CSA in planning for the tour, during which we made it clear that CA was prepared to take on additional cost and effort to make the series happen.

“This decision has not been made lightly and we are extremely disappointed, especially given the importance of continuing international cricket at this time, our valued relationship with CSA, and our aspirations to compete in the inaugural ICC World Test Championship.

“However, we have been consistent since the start of the pandemic that the health and safety of our people is always our number-one priority and unfortunately, despite best efforts to agree on a biosecurity plan, the risks are simply too great at this time. As difficult and disappointing a decision as this is, especially for Justin, Tim and the team, we have a duty of care to our people and their health and safety can’t be compromised.”

South Africa’s Covid-19 cases have plummeted by more than 50% in the past week and by March, when Australia were due to tour, most frontline workers would have been vaccinated.

While South African hospitals were admitting about 2,300 Covid-19 patients a day at the peak of the second wave, that figure dropped to fewer than 300 by the end of January.

On Monday, Ramaphosa said South Africa is seeing its lowest daily increase in Covid-19 infections since December 2020, with the number steadily dropping over the past three weeks.

“We have now passed the peak of the second wave,” he said.

CSA bent over backwards for Australia

CSA’s leadership was angry given that South Africa recently hosted Sri Lanka in a bio-secure environment (BSE) at Centurion, with no breaches of protocol. Currently, the Pakistan Women’s team are touring the country in a secure BSE in Durban.

In addition, CSA has continued its domestic Momentum One-Day Cup in a BSE in Potchefstroom and no positive cases have been reported.

“We are extremely disappointed by the decision of CA,” Director of Cricket, Graeme Smith, said in a statement. “CSA has been working tirelessly in recent weeks to ensure that we meet every single expectation of CA.

“This was set to be the longest tour in a BSE comprising a three-match Test series that was scheduled to begin with Australia’s arrival later in the month. So to be informed about the CA decision at the eleventh hour is frustrating.”

CSA’s Chief Medical Officer, Dr Shuaib Manjra, added that there was not much more CSA could have done to appease CA and prepare more appropriately.

“The protocols we had proposed to CA were unprecedented,” he stated. “Firstly, we had agreed that our own Proteas team would enter the BSE 14 days prior to the arrival of the Australian team, thus altering their planning during the current tour of Pakistan.

“Amongst some of the other key arrangements made were that all four areas (two hotels and two venues) had a protocol to implement a strict BSE with no contact with anybody outside this area.

“We subsequently agreed to two separate BSEs and had granted Australia full and exclusive use of the Irene Country Lodge, which we shared with Sri Lanka, with a minimum staff present on site.

“In terms of the arrangements, the Proteas were to move to a separate hotel altogether. Furthermore, all hotel staff, match officials and even bus drivers were to enter the BSE 14 days prior to Australia’s arrival.

“In addition, CSA had also committed to importing an Australian tracking system at great cost to ensure proper tracking of close contacts in the event of a positive test.  The touring team was also going to be granted VIP access through the airports, after government intervention to ensure this privilege.

“These are just some of the protocols that CSA was to put in place. We had really gone the extra mile to make sure that the tour would proceed.”

Pholetsi Moseki, CSA Acting Chief Executive Officer said, “It is indeed sad that after all the engagements and effort made to ensure a secure visit by our Australian counterparts, the tour has been derailed. CSA has incurred significant costs related to the planning stages and the cancellation of the tour represents a serious financial loss.

“In this challenging period for cricket and its member countries, we believe the stance taken by CA is regrettable and will have a serious impact on the sustainability of the less wealthy cricket playing nations.”

The recent Sri Lanka tour took place at the height of the second coronavirus wave and there was not one positive Covid-19 test.

“While disappointing for both playing groups and cricket lovers all over the world, this is a prudent decision considering the prevalence and virulence of the Covid-19 strain in South Africa,” Joe Connellan, interim CEO of the Australian Cricketers’ Association (ACA), told ESPNCricinfo.

“The Australian players were ready for the contest with South Africa, especially to support South African cricket at this time, with the added challenge of making the final of the ICC Test Championship.

“But this is the right call given the Covid data coming out of South Africa. It’s a decision based on the advice of the medical and health experts and that’s why the ACA supports it. The ACA offers its assistance to CA in exploring new options with Cricket South Africa for this series to be rescheduled.” DM

This article was updated at 16.25pm to include additional reaction and developments.