Jacob Zuma and the State Capture Commission: We need to talk about his lawyers 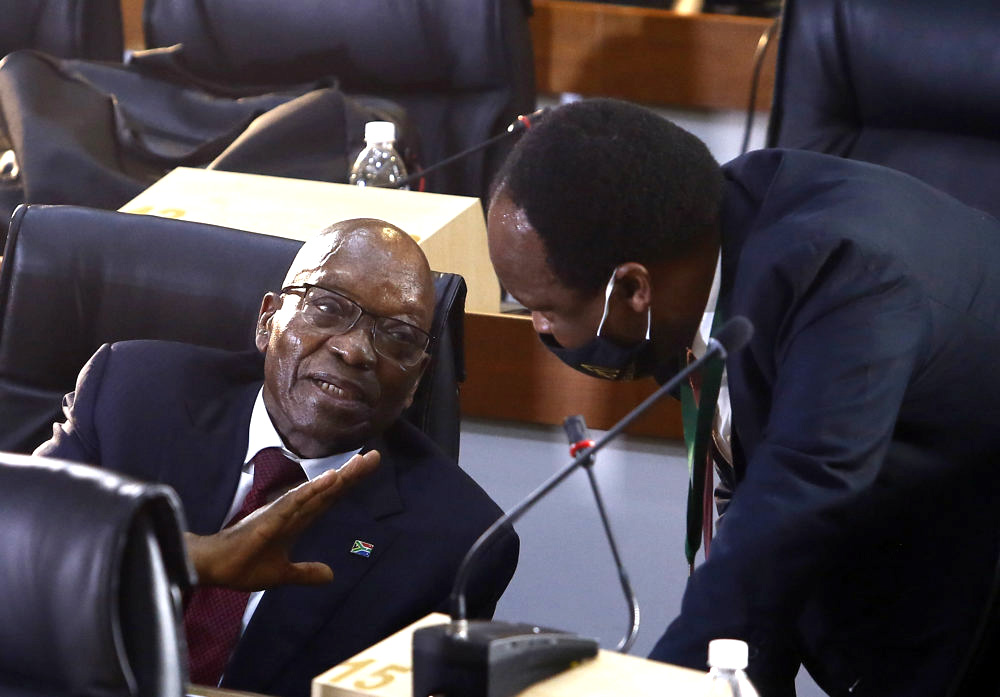 Former president Jacob Zuma and advocate Muzi Sikhakhane at the state capture commission of inquiry during his application that deputy chief justice Raymond Zondo must recuse himself in the inquiry.Photo Felix Dlangamandla/Daily Maverick

Last week the Constitutional Court held that former President Jacob Zuma acted in a 'reprehensible' manner in his dealings with the Commission of Inquiry into State Capture, and handed down a cost order against him. Mr Zuma’s reprehensible conduct was partly facilitated by his legal team, headed by Adv Muzi Sikhakhane. This raises questions about the ethical and legal obligations of lawyers representing powerful clients whose legal strategy depends on disobeying the law in direct breach of the rule of law.

Last week, advocate Kemp J Kemp, who famously represented Jacob Zuma in his rape trial and executed Zuma’s “Stalingrad strategy” to help him avoid accountability for his alleged involvement in corruption, passed away. Kemp has been widely (and rightly) praised for his brilliant legal mind, but his dubious ethical treatment of Fezekile Kuzwayo, the survivor and complainant in the Zuma rape trial, was generally glossed over. As Redi Tlhabi previously remarked, Kemp J Kemp was “masterful – and I don’t mean that as a compliment – in slut-shaming Fezekile Kuzwayo.”

It has long been a strategy of defence counsel in rape trials to exploit deeply entrenched sexism in society by putting the victim on trial, turning the prosecution of the rapist into the prosecution of the survivor. Kemp followed the same strategy. Given permission by the court to interrogate Kuzwayo on her sexual history, including consensual encounters with other men, Kemp repeatedly sought to imply that Kuzwayo had sex with men she did not know well. The implication was that Kuzwayo was, essentially, ‘a slut’ – and therefore “unrape-able”. This strategy – aided and abetted by the presiding judge Willem van der Merwe – worked in the sense that Zuma was acquitted of raping Kuzwayo despite the significant evidence pointing in the other direction.

What Kemp did was not unlawful. Arguably, his conduct also did not contravene the General Council of the Bar’s Code of Professional Conduct or its Uniform Rules of Professional Ethics. But his conduct does raise serious questions about what type of conduct we have a right to expect from lawyers, and whether it could ever be professionally and personally acceptable for lawyers to aid and abet the reprehensible conduct of their clients. How, for example, would we judge a senior advocate who exploits deeply entrenched racial prejudice in defence of his or her client?

Asking questions about the ethical behaviour of lawyers who defend their clients, must not be confused with unwarranted criticism of lawyers for taking on any client. Every person, no matter how dishonest or reprehensible, has a right to legal representation. It is therefore not appropriate to criticise a lawyer merely on the basis of the clients he or she represents. In fact, in terms of section 80 of the Bar Council’s Code of Professional Conduct, read with section 2.1 of the Uniform Rules of Professional Conduct, advocates have a duty to take on a brief regardless of who the client is.

This is often referred to as the “taxi cab rule”, and although there are always ways of getting around this rule, advocates often represent clients whom they have little in common with and may even profoundly disagree with or dislike. This is why the same advocate could represent Busisiwe Mkhwebane today and Pravin Gordhan tomorrow, Afriforum today and the EFF tomorrow.

Moreover, in terms of section 3.1 of the Uniform Rules of Professional Conduct an advocate has a duty — while acting with all due courtesy to the tribunal before which he is appearing – to “fearlessly uphold the interests of his (sic) client without regard to any unpleasant consequences either to himself or to any other person”.

Moreover, section 3 of the Bar Council’s Code of Professional Conduct prohibits an advocate from engaging in conduct which is: “3.1.1 dishonest or otherwise discreditable to an advocate; 3.1.2 prejudicial to the administration of justice, or 3.1.3 likely to diminish public confidence in the legal profession or the administration of justice or otherwise bring the legal profession into disrepute.”

Given these obligations, the judgment of the Constitutional Court handed down late last year in the case of  Public Protector v Commissioner for the South African Revenue Service and Others must raise eyebrows. The High Court had handed down a personal cost order against Public Protector Busisiwe Mkhwebane, partly because she had falsely claimed that she had not received notice that a personal costs order would be sought against her. The Constitutional Court overturned the personal cost order, pointing out that in oral argument her counsel, Dali Mpofu, had owned up to the fact that:

The Constitutional Court pointed out that the assertion that the Public Protector did not receive notice that a personal cost order would be sought against her “is astounding and warrants censure and perhaps more”, raising the question of whether it would not be appropriate to censure Adv Mpofu who advised her to embark on this “astounding” course of action that “warrants censure”. I would argue that in this case, the senior counsel went further than merely fearlessly upholding the interests of his client and strayed into the impermissible terrain of misleading the court.

Which brings us to the most recent Constitutional Court judgment in Secretary of the Judicial Commission of Inquiry into Allegations of State Capture, Corruption and Fraud in the Public Sector including Organs of State v Zuma in which the court censured Zuma for flouting his legal obligations to co-operate with and testify before the State Capture Commission. The Court censured Zuma’s conduct in the most emphatic terms, stating that:

“It is remarkable that the respondent would flout regulations made by him whilst he was still President of the Republic. The respondent’s conduct in defying the process lawfully issued under the authority of the law is antithetical to our constitutional order. We must remember that this is a Republic of laws where the Constitution is supreme. Disobeying its laws amounts to a direct breach of the rule of law, one of the values underlying the Constitution and which forms part of the supreme law.  In our system, no one is above the law.  Even those who had the privilege of making laws are bound to respect and comply with those laws.  For as long as they are in force, laws must be obeyed.”

The court proceeded to describe this conduct by Zuma as “reprehensible”, and noted that by “ignoring process from the Commission, he did not only contravene the Commissions Act but he also breached regulations made by him for the effective operation of the Commission. His conduct seriously undermined the Commission’s investigation”.

This raises the question of whether Zuma’s legal team did not set out to diminish public confidence in the legal profession and the administration of justice in breach of their professional obligations. Is it really acceptable for an advocate to assist your client to disobey the law and act in direct breach of the rule of law? Does one not have a professional duty to steer your client away from such unlawful and reprehensible” conduct?

There is a thin but relatively clear line between fearlessly representing your client’s interest, on the one hand, and misleading the court and undermining the administration of justice, on the other. I would argue that ethical lawyers will always err on the side of caution to ensure that they stay on the right side of this line. But, as the examples above illustrate, unfortunately not all lawyers do. DM

Pierre De Vos teaches Constitutional law at the University of Cape Town Law Faculty, where he serves as deputy dean and as the Claude Leon Foundation Chair in Constitutional Governance. He writes a regular blog, entitled ‘Constitutionally Speaking’, in which he attempts to mix one part righteous anger, one part cold legal reasoning and one part irreverence to help keep South Africans informed about Constitutional and other legal developments related to the democracy.