Plans are afoot to get Prasa back on track after Covid-... 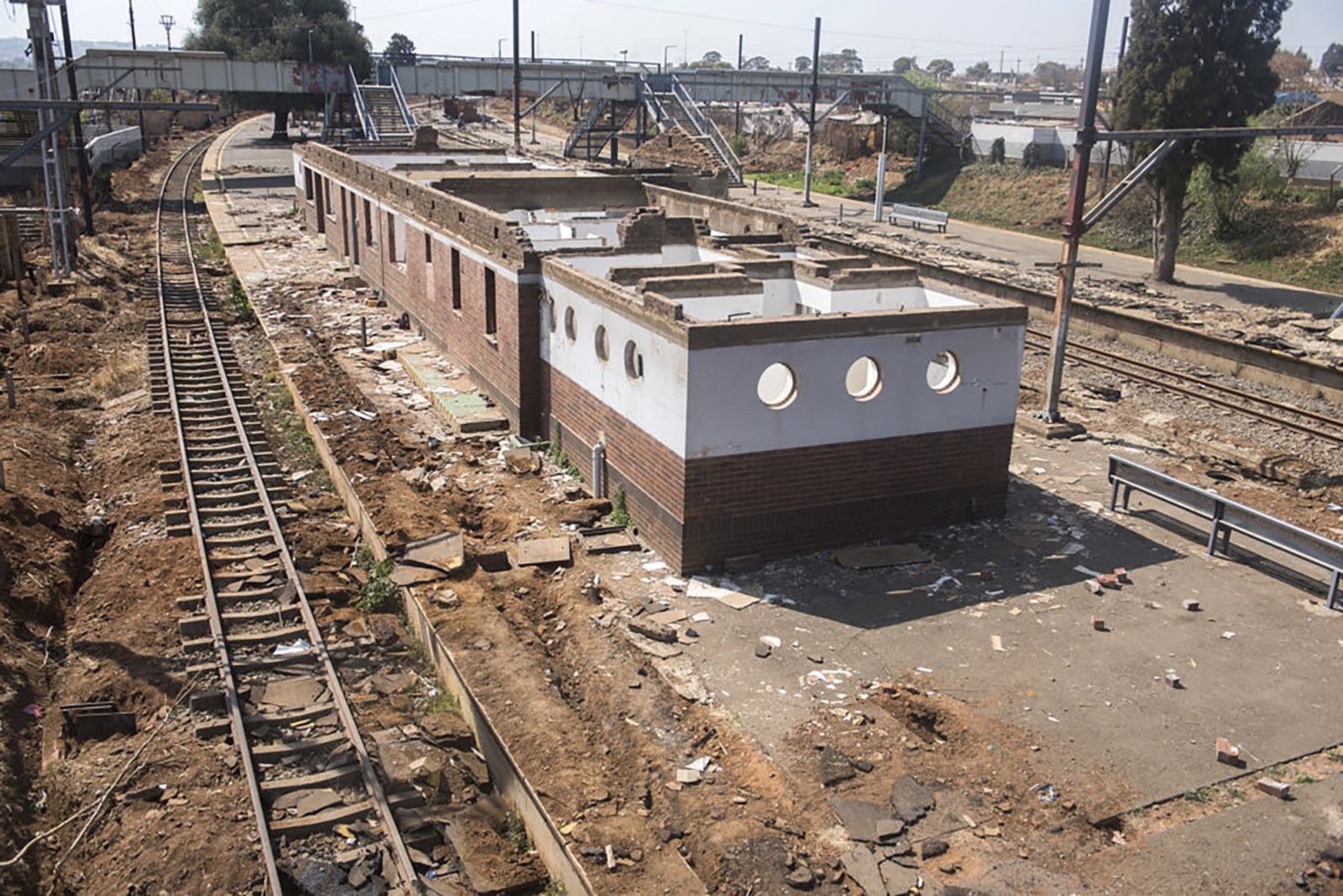 Klipspruit train station after it was stripped by thieves. (Photo: Shiraaz Mohamed)

The year 2021 will be tough for the embattled Passenger Rail Agency of South Africa as it seeks to catch up on plans to fix troubled railway projects that were delayed by the Covid-19 lockdown.

There have been 321 known workers who have contracted Covid-19 at the Passenger Rail Agency of South Africa (Prasa) since March 2020, of whom 16 have died. The coronavirus and subsequent lockdowns have caused the rail agency to halt plans and delay key new projects. But, in 2021, the agency seeks to complete projects – this time with stable leadership.

Bane Ndlovu, the acting general manager for corporate affairs, said Covid-19 had affected the running of the agency. Daily Maverick reported in May that Prasa lost R200-million between March and May because of the lockdown and closure of operations. The rail agency was shut down when South Africa went into a hard lockdown, and limited operations resumed in July.

Ndlovu said several key projects had been affected by the lockdown. These included recovery programmes on the Central Line (Western Cape) and Mabopane (Gauteng) corridors.

“Various projects could not go to market during lockdown, [and] many of these projects also required re-scoping, as theft and vandalism continued during this period,” said Ndlovu.

Zukie Vuka of rail activist coalition #UniteBehind told Daily Maverick, “Apart from the obvious change in terms of the environment, Prasa still had the same challenges which have been carried over from the previous years. Governance, infrastructure, cancellations and delays were still the biggest challenges even though there was only the Southern Line operating between July and the beginning of November.”

The Northern Line in Cape Town reopened in mid-November. However, the Central Line, which was closed in November 2019, has still not reopened. The line links to areas on the Cape Flats, including Khayelitsha and Mitchells Plain.

Ndlovu said only 16 out of 46 corridors are operational. “There is a fully fledged roll-out plan aligned to rehabilitation of the network and security deployment,” she added.

One of the challenges for Prasa is theft of infrastructure. In a Daily Maverick special report in 2020, Prasa said there were 1,833 incidents of vandalism over the past few years, costing in excess of R2-billion.

In Gauteng, only three out of 17 stations are functioning. Prasa told Parliament that vandalism and theft of the rail infrastructure was “sabotage”.

Vuka said Prasa needed to focus on three key themes: governance, security for infrastructure and commuters, and cancellations and delays.

“We need to know how far they are with their plans to turn things around. What exactly have they been doing? Are we making any progress with the insourcing?” she asked.

Sonja Carstens, the communication and media liaison for the United National Transport Union, which is the largest union at the agency, said: “Prasa can’t afford any more setbacks in 2021.”

She said the union believed 2021 would be a “make or break year for Prasa, but once again [we] call on President Cyril Ramaphosa and the rest of government to show the political will to save [Prasa]”.

“Prasa will not make any progress without the assistance of each and every stakeholder in government, who need to come to the table and play their part to ensure that our children will still enjoy the cheapest form of public transport.”

Ndlovu said Prasa’s plans for 2021 included the roll-out of the Central Line and Mabopane corridors and putting new trains, dubbed the “People’s Trains”, into operation. Other plans include the rehabilitation of infrastructure and rolling stock, and the implementation of Prasa’s depot modernisation plan.

Prasa will start 2021 with a new, permanent board – something it hasn’t had since 2017. In October 2020, following a court order, a former ANC MP on Parliament’s transport oversight committee, Leonard Ramatlakane, was appointed by Transport Minister Fikile Mbalula as the new chairperson of the board of control.

At last – a permanent board for embattled Prasa

Ramatlakane was appointed after the Western Cape High Court in August 2020 ruled that Mbalula’s appointment of Bongisizwe Mpondo as administrator was unlawful, as only the judiciary or Parliament had the powers to appoint an administrator.

One of the first tasks for Ramatlakane and his board is to find a permanent CEO, which the entity has not had since Lucky Montana resigned in 2015. The head of Human Capital, Thandeka Mabija, was appointed as acting CEO.

But at the heart of it all is a dysfunctional passenger rail system.

Vuka told Daily Maverick: “Commuters have… been delayed for almost two years now, even before the pandemic, [and] further delays have made things even worse. Commuters who are still lucky to have jobs have had to use expensive alternative transport.” DM