Deputy Chief Justice Zondo is back from Covid isolation... 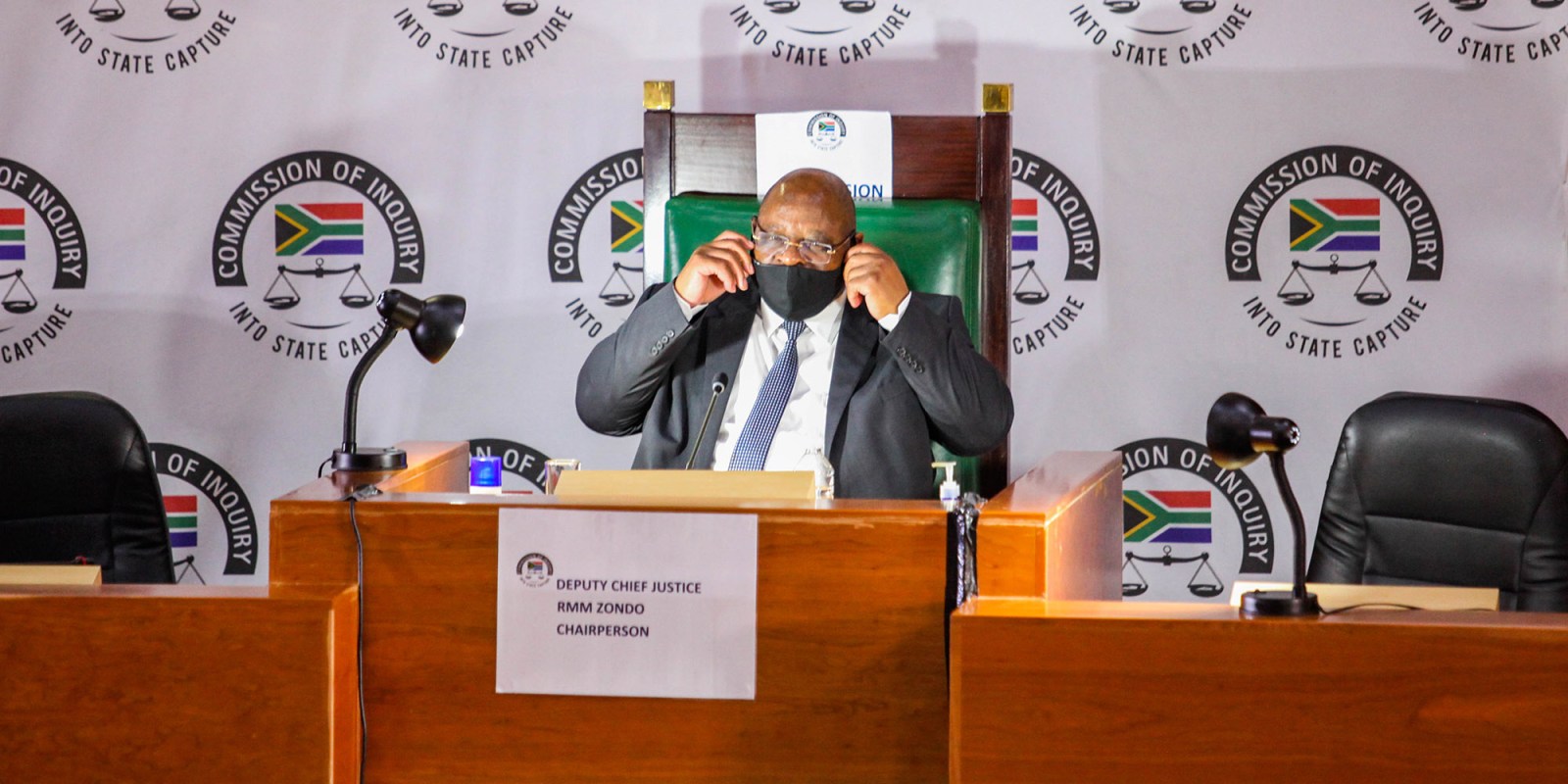 Deputy Chief Justice Raymond Zondo is scheduled to submit his final report to President Cyril Ramaphosa by 31 March 2021, but he plans to apply to court for a three-month extension to cover the time lost during the lockdown. (Photo: Gallo Images / Sharon Seretlo)

The State Capture commission will resume public hearings on Monday after yet another delay. It is expected to apply to court this week for an extension until the end of June.

Public hearings at the State Capture commission are due to resume on Monday with Dr Sydney Mufamadi testifying about the High-Level Review Panel on the State Security Agency (SSA) report as Deputy Chief Justice Raymond Zondo pushes to finish hearing oral evidence by the end of March 2021.

Hearings adjourned abruptly during former Eskom boss Brian Molefe’s testimony recently when Zondo announced he had been exposed to someone who was confirmed to have Covid-19. Zondo went into the mandatory 10 days of isolation.

The commission lost a week of public hearings, another delay after losing three months of hearings in 2020 due to the Covid-19 lockdown and further time due to unprepared witnesses or those reluctant to appear (the commission’s secretary has told the Constitutional Court that up to November 2020, five weeks had been lost just due to former president Jacob Zuma’s failure or refusal to appear).

Zondo is scheduled to submit his final report to President Cyril Ramaphosa by 31 March 2021, but he plans to apply to court for a three-month extension to cover the time lost during the lockdown.

In 2020, the North Gauteng High Court gave Zondo a 13-month extension, but Judge Wendy Hughes said “further extensions would not be warranted”.

The commission is yet to file its application to the court for an extension, but it appears likely that it will be granted.

“The commission is still busy with the preparation of its application for an extension. The application should be lodged within the next few days,” commission spokesperson Reverend Mbuyiselo Stemela told Daily Maverick in an email on Friday.

“The commission will ask for a three-month extension from April to June 2021 just to recover three months of public hearings it lost during the hard lockdown when it was not allowed to hold public hearings.

The Council for the Advancement of the Constitution (Casac) was party to court proceedings in 2020.

“We have not received any notice of an application for an extension of the timeframe for the State Capture inquiry,” said Casac director Lawson Naidoo.

“Should the commission request an extension of three months to the end of June 2021, as indicated by the Deputy Chief Justice at a media briefing in December, Casac will not oppose such an application. We believe that a three-month extension would be reasonable in the circumstances,” he said.

None of the eight respondents, including President Ramaphosa, the DA, Cope, the EFF and the UDM opposed the original extension application, but Public Protector Busisiwe Mkhwebane and Casac both called for stipulations to be imposed.

Casac called for the extension to be final while Mkhwebane wanted the commission’s broad scope redefined to focus on the original State of Capture report, which the court did not grant.

Ramaphosa has granted the commission multiple extensions. It’s reported to have cost the state more than R700-million since it was established in August 2018.

Stemela said he was unable to provide details on which of the commission’s workstreams still need to hear oral evidence and how long each is expected to take.

Former president Zuma is the most high-profile witness the commission is trying to get to return to give evidence. Zuma was scheduled to appear from 18 to 22 January, but his lawyers wrote to the commission to say he was not legally obliged to appear while legal matters are still pending.

Zuma went to court to review Zondo’s decision not to recuse himself and the commission applied to the Constitutional Court to compel the former president to attend and answer questions. Zuma was also scheduled to appear from 15 to 19 February 2021.

Other alleged major players in the State Capture project who are yet to appear or return include Litha Nyhonyha, Niven Pillay and Eric Wood from Regiments and Trillian Capital Partners, Gupta “fixer” Kuben Moodley and former leaders of state-owned entities such as Anoj Singh, Siyabonga Gama and Stan Shane.

“Cross-examination is part of the processes that the commission allows and it is not thought that they will unduly delay the completion of the work of the commission,” he said

In a statement last week, Stemela said Zondo “is in good health and has no symptoms associated with Covid-19. He is busy with the work of the commission in his place of isolation and will be back when the hearings resume next week as his period of isolation will have ended.”

On Monday, Mufamadi, who chaired the High-Level Review Panel on the SSA, is expected to testify on how the intelligence agency was used to fight political battles.

His report recommended a broad overhaul of the SSA as well as further investigations into whether criminal charges should be laid against the officials and politicians allegedly responsible. DM