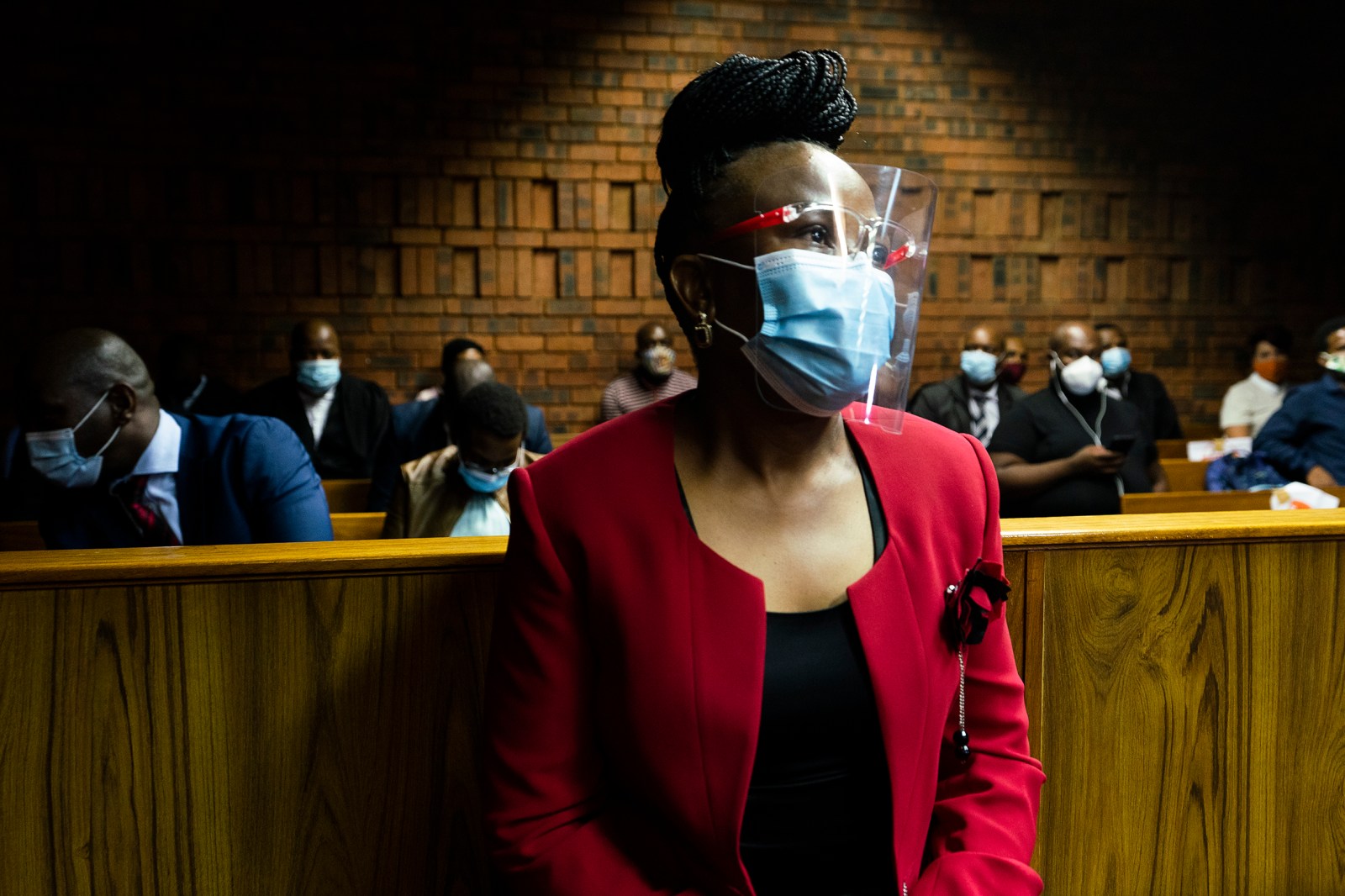 Public Protector Busisiwe Mkhwebane sits in the dock at the Pretoria Magistrates Court on charges of perjury. The case has been postponed till 25 March 2021. Photo / Shiraaz Mohamed.

Public Protector Busisiwe Mkhwebane appeared in the magistrate’s court in Pretoria on Thursday morning, charged with three counts of perjury. Mkhwebane is accused of having lied to the courts over her SA Reserve Bank investigation – and becomes the first sitting head of a Chapter 9 institution to face criminal charges.

Public Protector Busisiwe Mkhwebane made a brief appearance in the Pretoria Regional Court on Monday, flanked by her lawyer Dali Mpofu.

Although Mkhwebane is accustomed to having her reports taken on legal review, on this occasion she was facing the heat personally: charged with three counts of perjury.

No arguments were heard and no pleas entered at this stage, as the state and Mkhwebane’s counsel had agreed on a postponement of the matter until 25 March 2021. Mpofu told the court, however, that they intend to seek a withdrawal of the case on the grounds that the charges against the Public Protector are “frivolous”.

The perjury charges were laid against Mkhwebane by the head of NGO Accountability Now, advocate Paul Hoffman, in August 2019. They stem from Mkhwebane’s conduct during the judicial review of her investigation into the SA Reserve Bank’s bailout of apartheid bank Bankorp between 1985 and 1991.

In particular, Mkhwebane is accused of having “unlawfully and intentionally” lied under oath in court documents in 2017 and 2018 about the number of times she met with former president Jacob Zuma during the investigation into the SA Reserve Bank, and the purpose of those meetings.

The Constitutional Court found in November 2018 that Mkhwebane had “put forward a number of falsehoods in the course of litigation” around the Reserve Bank report.

The meetings that Mkhwebane held with Zuma and state security officials over the Reserve Bank report were considered extraordinary given the need for the head of a Chapter 9 institution to conduct herself with independence and impartiality.

In the meetings of one such meeting, Mkhwebane had written: “How are they vulnerable?”, with reference to the Reserve Bank.

Mkhwebane’s eventual report was overturned by the courts on the grounds that she had grossly overstepped her mandate by ordering Parliament to re-direct the mandate of the Reserve Bank.

Mkhwebane’s office previously released a statement in response to the perjury charges saying that the Public Protector would be cooperating with the judicial process “as a law-abiding citizen”, but was “confident the court will clear her of any wrongdoing”.

The Public Protector’s court appearance on Thursday came a week into a two-and-a-half-month break taken by Mkhwebane to “rest”. Her sabbatical may further be disturbed in future by her requirement to cooperate with Parliament during the independent inquiry currently being carried out into Mkhwebane’s fitness to hold office.

Hoffman told Daily Maverick this week: “Advocate Mkhwebane is the author of her own misfortune”. DM