Proteas women hold on as Shabnim Ismail leads the charg... 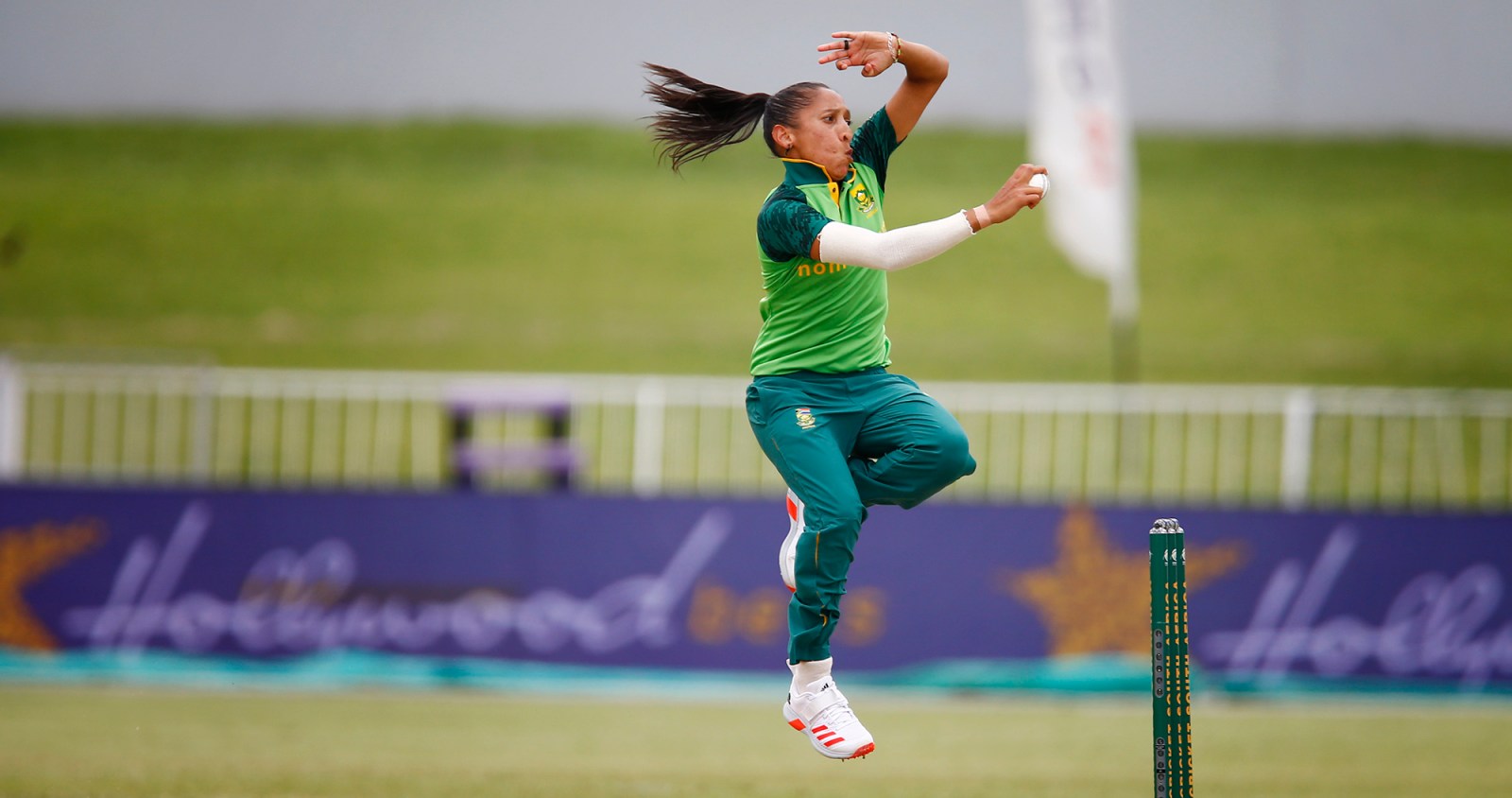 Shabnim Ismail of the Proteas women’s team during the 2021 Women’s ODI Series between South Africa and Pakistan at Kingsmead in Durban. (Photo: Steve Haag / BackpagePix)

Shabnim Ismail had a busy day as the Proteas squeezed past Pakistan in the first of three ODIs between the two sides. She starred with the ball, while also managing a crucial cameo with the willow.

It was a nerve-racking return to competitive cricket for the Proteas Women’s team as they edged Pakistan Women by three runs in the first of three One-Day Internationals (ODIs).

The two teams were back in action following a 10-month layoff, enforced by Covid-19 and the subsequent travel restrictions. And the lack of match practice was evident on both sides.

This was particularly true among the batters, who gave away their wickets at regular intervals. This saw 17 wickets fall at the Kingsmead cricket stadium in Durban.

One of those who enjoyed her return to international cricket, and tormented the Pakistani batters as they chased South Africa’s modest target of 200 for nine, was Shabnim Ismail.

The experienced 32-year-old pacer led the charge in defending the Proteas’ target. The Proteas would have taken solace from the fact that the visitors had chased a total of 200 or more only thrice before.

Ismail was still riding high from her mesmerising performance at the Women’s Big Bash League (WBBL), where she claimed the title with Sydney Thunder and became the first South African to win Player of the Match in the WBBL final.

“We’re just happy to come out and play cricket again. One thing I work on in the nets is just trying to be consistent, working on one thing at a time, which is obviously bowling top of off-stump,” said Ismail a few days before the fixture.

The Proteas seamer’s persistent practice paid off as she struck the first blow in the Pakistani defence, grabbing the wicket of Muneeba Ali, caught behind for a single run after just three overs.

Next to walk was Nahida Khan (13), who also fell victim to the genius of Ismail – this time through a run-out.

Not long after Nonkululeko Mlaba picked up her maiden ODI wicket, on debut, and Tumi Sekhukhune trapped Sidra Nawaz leg before wicket (LBW), the Proteas’ stand-in captain for the series, Sune Luus, brought back Ismail.

The seamer continued to torment the Pakistan batters, this time shattering an innings-stabilising 51-run partnership between Nida Dar and Aliya Riaz. Ismail castled the stumps of Riaz and Fatima Sana off successive deliveries.

Ismail’s heroics, as she finished with three for 42 as well as a 20-run knock, meant the valiant efforts of Dar and Diana Baig – which saw them put together an impressive 60-run partnership for the ninth wicket – were in vain.

Rust in the levers

The South Africans showed that they lacked some game experience as they allowed Pakistan to come close to causing an upset.

A combination of dropped catches and missed run-outs in the final 10 overs meant the Proteas went into the final over with their hearts in their mouths.

Nadine de Klerk was given the responsibility of defending 12 runs in the final over. Baig had the South Africans sweating when she hit a four off the penultimate delivery by the all-rounder.

This left Pakistan requiring one more boundary to level the scores. De Klerk held her nerve though, denying the Pakistan bowler an opportunity with a pacey ball which she could not play. Baig finished with a score of 35 not out to complement Dar’s 59 not out.

“We took the game quite deep, and it shouldn’t be taken too deep. We should’ve shown a little intent in the middle phase, which would’ve seen the game finished by the 45th over… I think that middle phase cost us,” Pakistan captain Javeria Khan said after the game.

Earlier, Baig had also picked up three wickets and the visitors restricted the Proteas to 200. She vanquished Lizelle Lee, Luus and De Klerk. She also ran out Laura Wolvaardt.

Wolvaardt had partnered with Lara Goodall to steady the ship after the early dismissals of Lee and Luus. They put on a 61-run stand before Goodall fell to left-arm spinner Nashra Sandhu, for 27 runs.

Kapp, who has been plagued by niggling injuries recently, would’ve been happy with top-scoring for the South Africans, as she fell just short of her half-century, out for 47.

In the end, the Proteas will be happy to have started the series with a win. However, going forward they will look to be sharper than they were during this game.

One crucial aspect they will look to sharpen is the fielding, to avoid a repeat of dropped catches and misfields. The batters will look to give a better account of themselves, with no one passing the 50-run mark during the first ODI.

Next is the inaugural Black Day ODI, which is the Proteas’ contribution to the ongoing fight against gender-based violence. The match is set for Saturday 23 January and will be live on SuperSport from 10am. DM