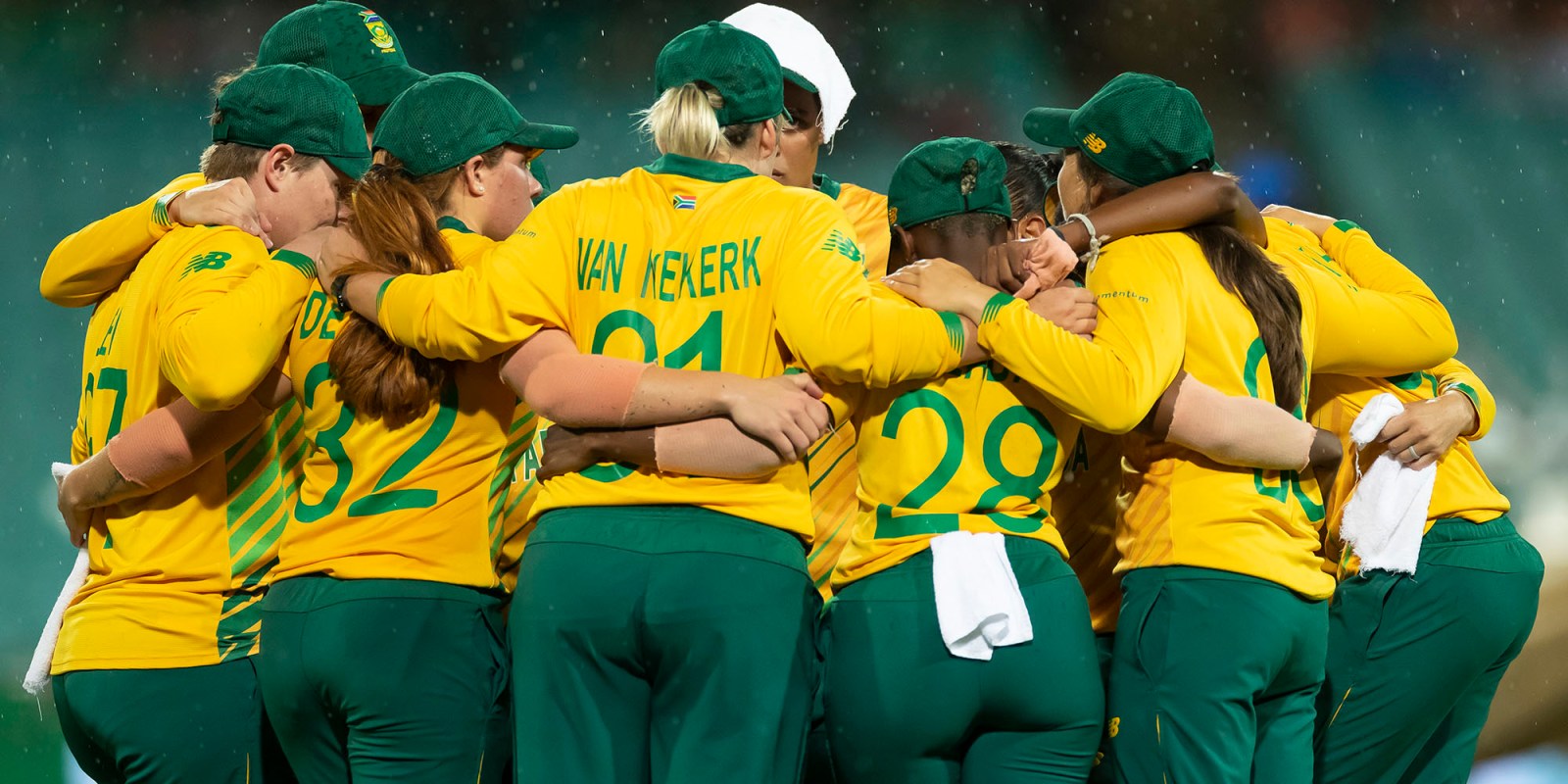 The Proteas in a huddle after the Australian innings during the Women's T20 World Cup semi-final match between Australia and South Africa at the Sydney Cricket Ground on 5 March 2020. (Photo: EPA-EFE / Craig Golding)

Cricket South Africa has taken heed of the call by President Cyril Ramaphosa to act against the scourge of violence against women and children by launching the Black Day One-Day International.

The Proteas women’s team will make a poignant stand against gender-based violence (GBV) with the launch of the Black Day One-Day International (ODI) in Durban. The symbolism of the women’s team taking this stance is profound.

Cricket South Africa (CSA) announced the initiative on Monday, which it hopes will help amplify the message that GBV has no place in society.

“The Black Day ODI is one event in our calendar that will allow us as a federation and the Proteas players to become servants of the community,” said CSA acting chief executive Pholetsi Moseki during a virtual press conference.

“This is an opportunity for us to raise awareness and encourage our society to be intolerant of all forms of violence against women and girls. The Black Day ODI is an opportune platform to galvanise, educate, mobilise, create awareness and agitate towards the eradication of GBV.”

The inaugural event was initially set to be unveiled in March 2020, when South Africa was to host T20 Women’s World Cup champions Australia.

However, Covid-19 making landfall on South African shores in the same month forced those plans to be canned. Until now.

“It’s something that has been coming for a long time. And we as a team felt that it is something we can identify with, directly or indirectly… We can start creating awareness and take a stance that was alluded to by our president [Cyril Ramaphosa], against GBV, through the vehicle of sport,” said Proteas coach Hilton Moreeng.

GBV is widespread in South Africa, affecting almost every aspect of life. Moreover, it disproportionately affects women and girls.

In June 2020, during one of his national Covid-19 pandemic addresses, Ramaphosa labelled the scourge another pandemic.

“At a time when the pandemic has left us all feeling vulnerable and uncertain, violence is being unleashed on women and children with a brutality that defies comprehension. These rapists and killers walk among us,” Ramaphosa said.

“They are in our communities. They are our fathers, our brothers, our sons and our friends; violent men with utterly no regard for the sanctity of human life.”

CSA is hopeful that the event, set to be officially launched during the Proteas Women’s second ODI against Pakistan on Saturday, 23 January, will in time grow to similar levels that the Pink Day ODI has reached.

The Pink ODI, which was launched in 2013, has become one of the most anticipated days on the international cricket calendar. Through it, CSA and the men’s Proteas raise funds that are funnelled towards breast cancer awareness campaigns.

The same vision is held for the Black Day match.

“It was unfortunate that we couldn’t host the Black Day in March… In the future when we have another one, because this one is going to be very successful, we are 100% sure that the stands are going to be packed. And everyone in South Africa, as well as all the viewers around the world, are going to stand right behind us,” said Proteas stand-in captain for the series, Sune Luus.

Head of Cricket Pathways at CSA, Eddie Khoza, told the media that he felt it was imperative that the Proteas take a leading role in shining the spotlight on GBV, as he had witnessed first-hand over the years how aspiring female cricketers were plagued by GBV.

He suggested that through this campaign they could empower themselves, and also know that they were not alone.

“We tend to watch players from a cricketing point of view. We tend to neglect that cricket is not immune from what’s happening in society. One of the biggest challenges we’ve experienced through our player performance plan, when we conducted the needs assessment on players… there were a lot of alarm bells around gender-based violence issues that came out from the report,” said Khoza.

“When we looked at the feedback that came from that report, we found that we had to immediately act by getting psychologists and specialists to try and address those issues that were earmarked as red flags. Some of it revolved around physical abuse at home, sexual abuse, and all those types of issues.”

“We all need to take a stand on this theme, be more vocal about it, acknowledge it and talk about action plans… It’s a topic that sits close to all our hearts, and hopefully we can get all of South Africa really involved in supporting this cause,” said Momentum head of sponsorship Carel Bosman. DM