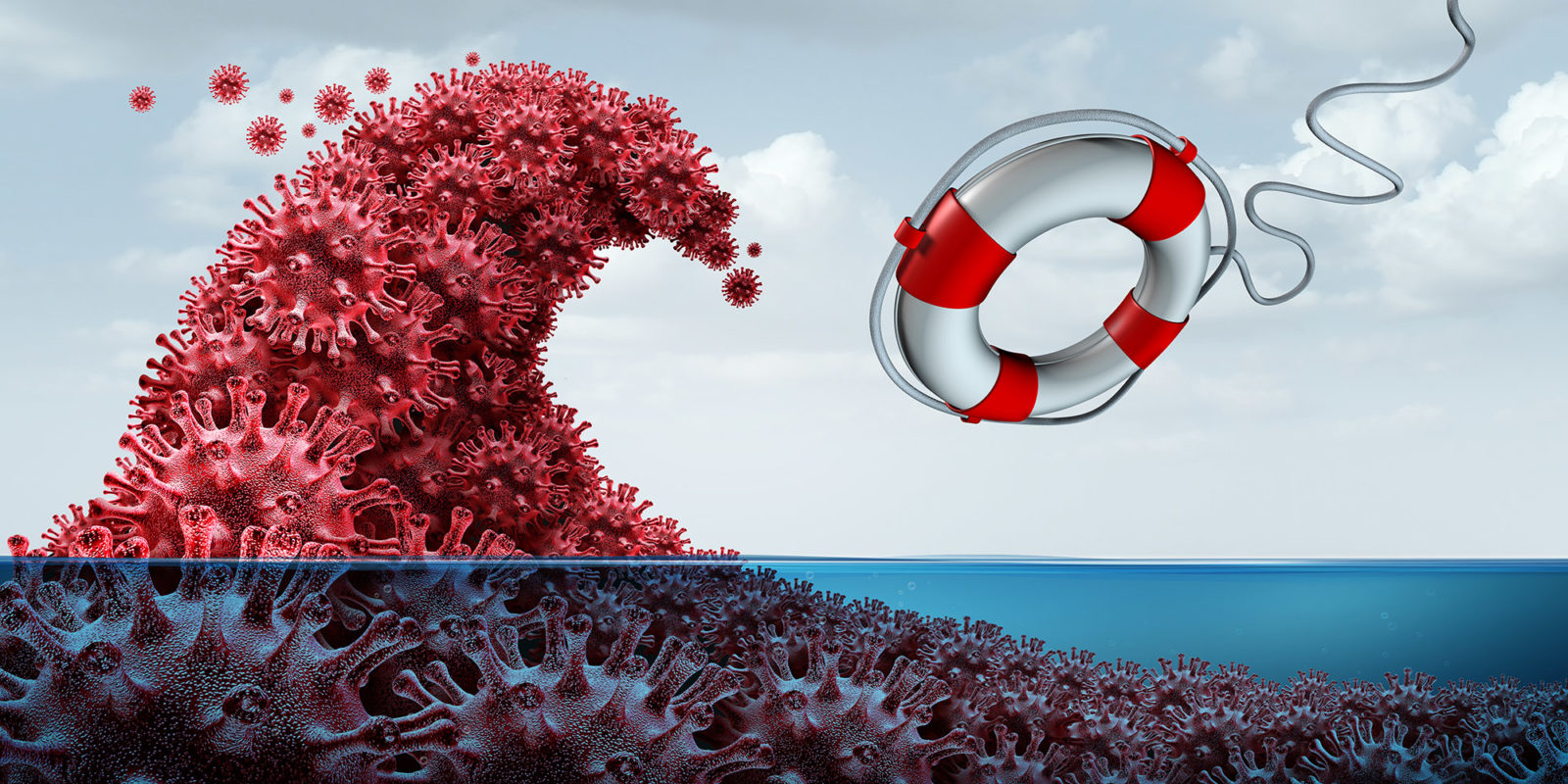 It’s just over a month since another wave of Covid-19 infections engulfed South Africa and already there is enough data to show this will overshadow the first. A breakdown of each province’s data shows what they’re now up against.

South Africa officially entered its second wave of Covid-19 on 9 December 2020, according to Health Minister Dr Zweli Mkhize. There were pleas for holiday safely over the festive season and new rules to curb the spread in hotspots, and then the entire country. 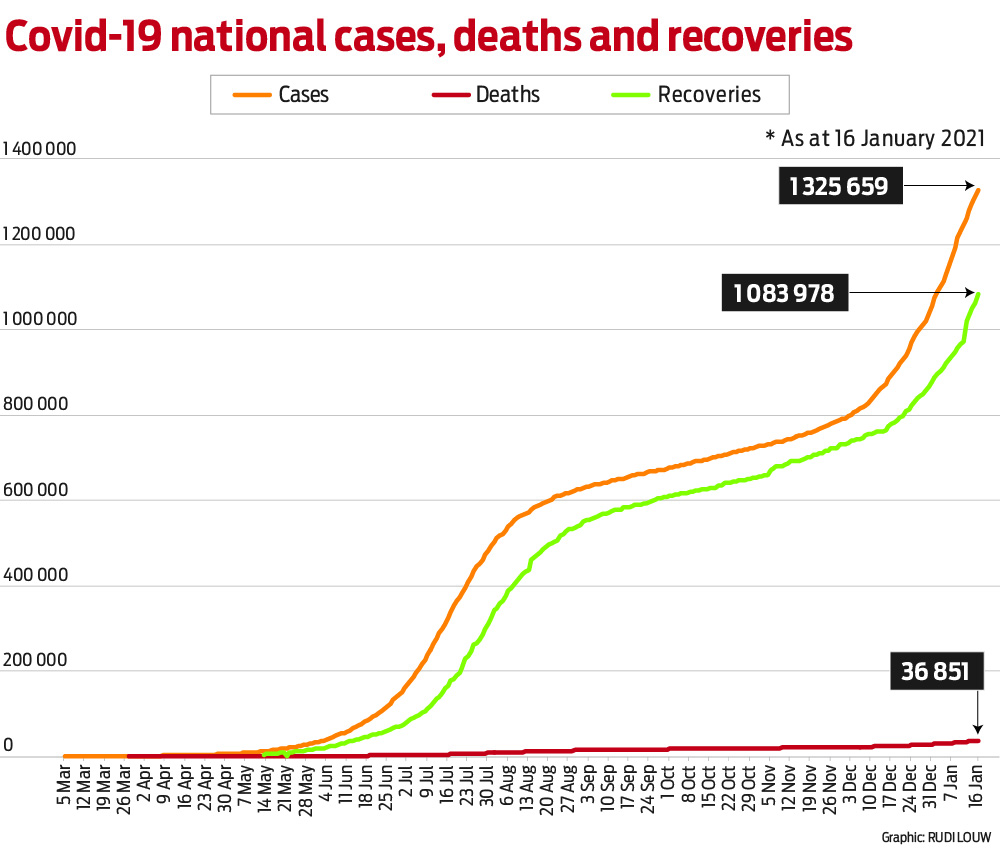 More than a month later, the data shows that the second wave is reaching far more people than the first. New daily increases for infections, cases and hospitalisations have shattered what we thought was horrific in the first wave.

Below are charts illustrating and comparing the pace of the pandemic through each province. Following this is an overview of where each province has come from since the first wave and where it stands according to the latest figures. 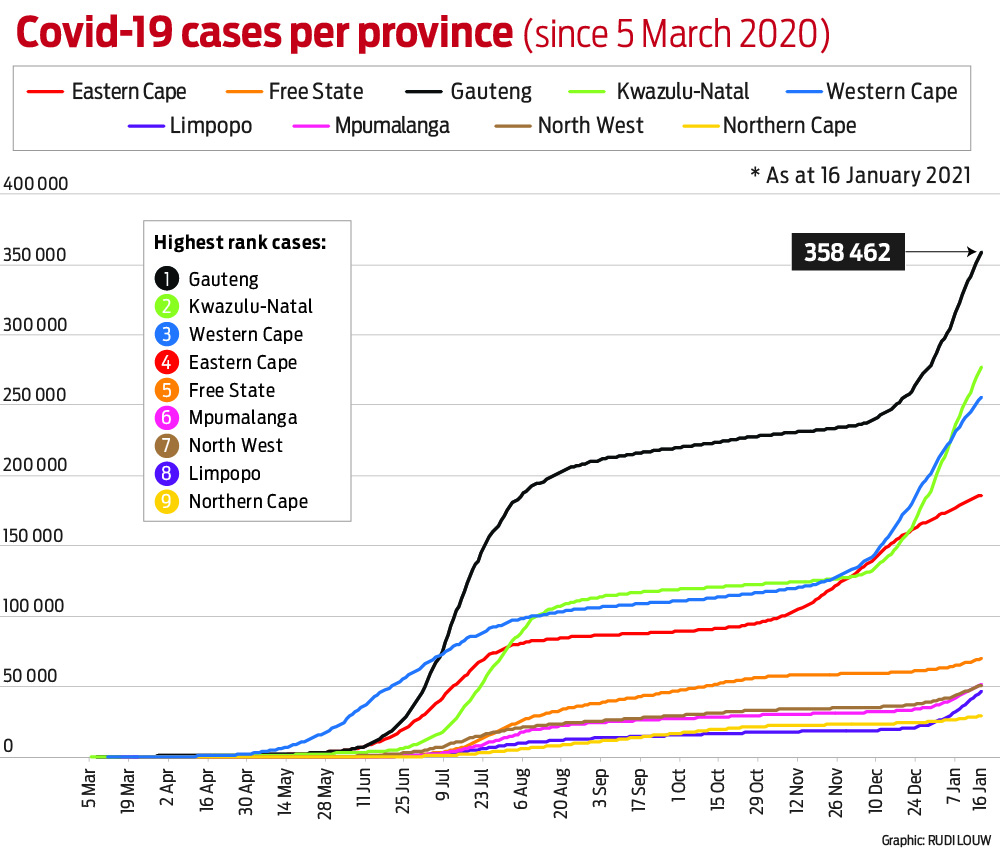 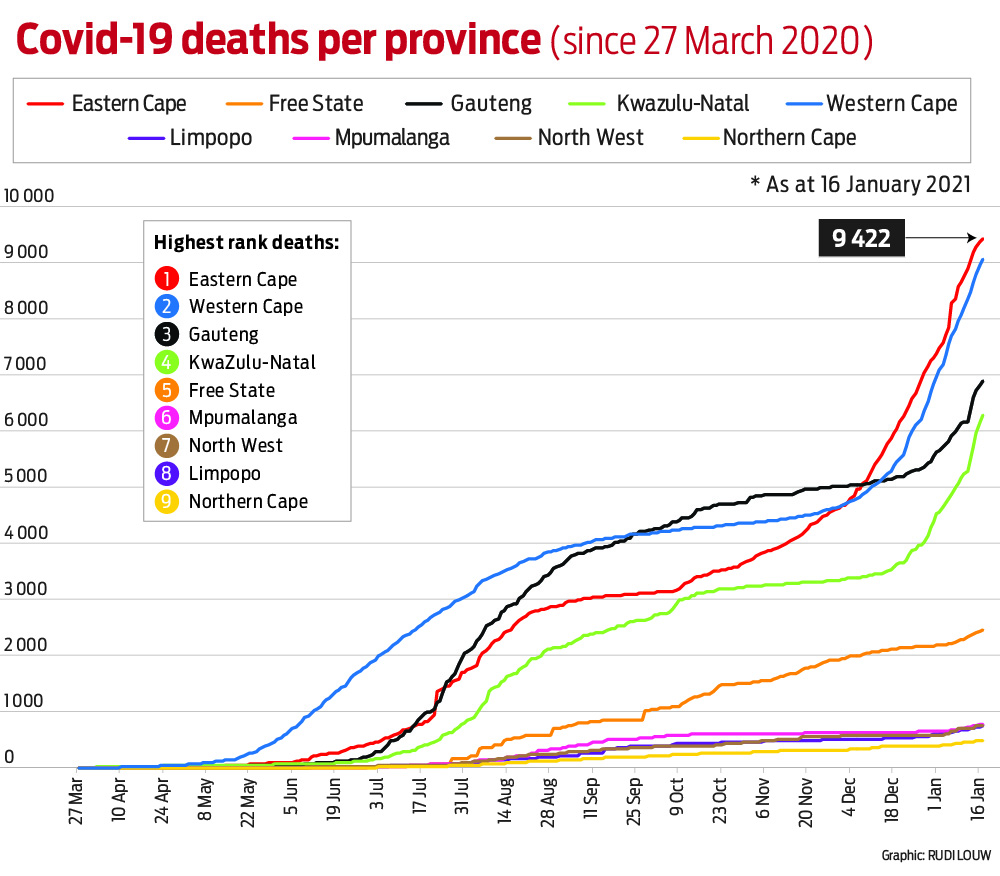 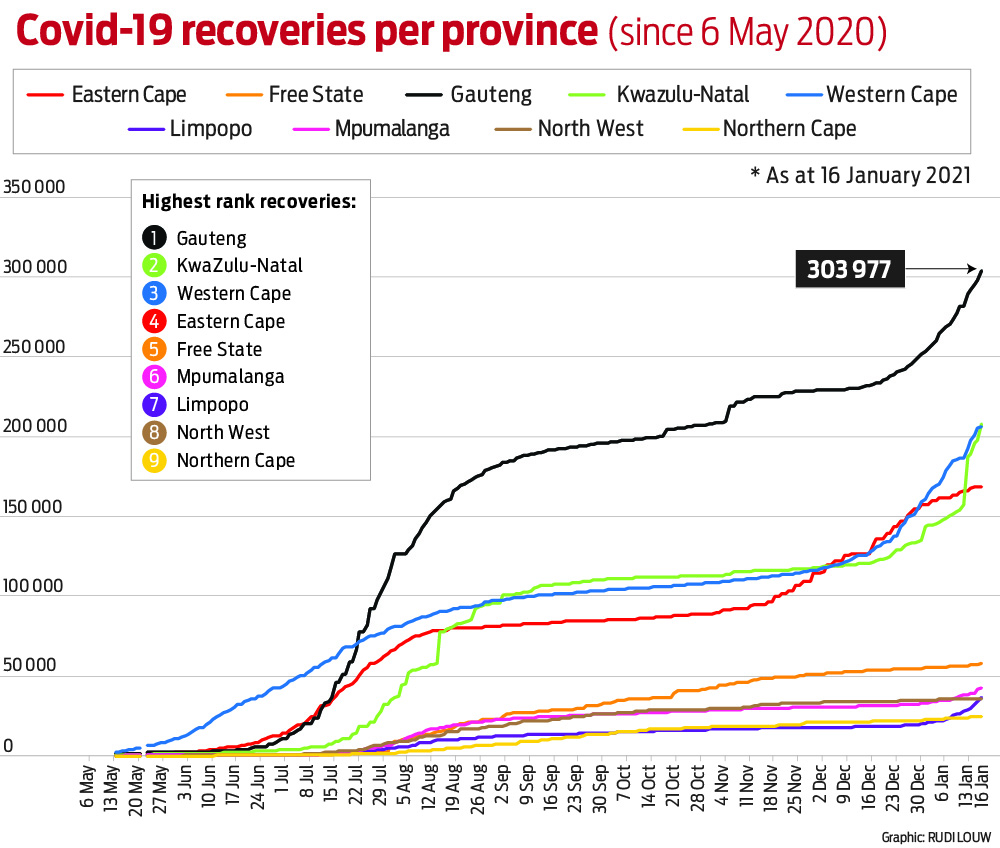 The Western Cape reported 111,108 new Covid-19 infections between 9 December 2020 – when the nationwide second wave was declared – and 16 January 2021. This accounts for 43% of all cases ever reported by the province.

Hospitalisations for Covid-19 have far surpassed that of the first wave in the Western Cape. By 15 December, more than 2,000 people were in hospital. Currently, there are 3,539.

The increase in cases has stabilised and the number of deaths has decreased in the past two weeks – however, there are still 36,536 active cases and each one of the province’s six districts is classified as a hotspot.

In the Eastern Cape, 45,496 people tested positive for Covid-19 between 9 December and 16 January. The daily number of new cases had been decreasing over the past week from more than 1,000 new cases a day to just under 800. The current wave has reached a high of 2,187 new cases on 10 December – this is slightly lower than the first wave’s highest daily increase of 2,433 on 6 July.

The province’s most deadly day has been 6 January 2021, when 452 were reported to have died from Covid-19. The first wave’s most deadly day was 22 July when 400 people died. Daily Covid-19 deaths have stayed around 100 since 6 December 2020. In total, the province lost 4,306 people to Covid-19 since 9 December. It presently has the highest number of Covid-19 deaths in the country.

Hospital admissions exceeded that of the first wave in early November and remained above 1,500 from the start of December. It now sits at 1,535.

Seven of the province’s eight districts have been declared hotspots. Only the Joe Gqabi district is not a hotspot. The province has 8,411 active cases.

The second wave has seen 5,829 more people infected with Covid-19 in the Northern Cape. On 16 January, the province recorded 381 new cases – during the first wave, it recorded a high of 373 new cases on 18 September. Since 9 December, 3,506 people have recovered from Covid-19.

This province’s hospitalisations increased gradually from July to October before decreasing until the beginning of December. In the past month hospital admissions have risen from 190 to 347.

None of its districts is presently a hotspot and there are 4,333 active cases.

Daily fatalities have increased to new heights in the past few days. The number of Covid-19 deaths in one day surpassed the 150 mark for the first time last week since August 2020 and has remained there since. However, this rise was interrupted when on 16 January it was reported that 125 people had died.

Hospitalisations peaked at 1,700 in August 2020, but this has been surpassed during the second wave in mid-December. Since then, the number has increased rapidly to 4,145.

Six out of its 11 districts have been declared hotspots.

Hospital admissions peaked in October at 725. This dropped to 142 by mid-December and then increased to 775 on 15 January.

Currently, there are 14,081 active cases and one of its four districts is a hotspot.

Gauteng’s hospitalisations were more than 3,000 for a period in August and again in October. This increased at the end of December and now stands at 5,115.

Gauteng has the largest number of total Covid-19 cases and recoveries. Four of its five districts are hotspots.

In the past month, Mpumalanga’s daily Covid-19 cases have surged from around 100 a day to well above 1,000. In that time, it has recorded 20,199 new cases and 152 deaths. However, 11,993 people have recovered while 8,523 remain ill. Fatalities are yet to reach the numbers seen during the first wave, which on three occasions surpassed 40 in a day. Now, fewer than 16 have died since the start of December.

Between July and December, hospitalisations ranged between 100 and 200. In January, this number increased from 266 to 556.

It has no hotspot districts.

This province has seen a dramatic increase in new Covid-19 cases. It reported 17,334 new cases in its second wave. During the first wave, it never reported more than 400 cases in a day. Since 23 December it has consistently reported above this, often reaching more than 1,500 in a day. In that time, active cases have increased from 1,638 to 9,348. Recoveries have increased by 18,298.

During the second wave, 227 people died from Covid-19 in Limpopo, with fewer daily deaths during this wave. In the first wave, this number regularly surpassed 30 – it now remains just above 20.

Since July, hospital admissions have stayed at around 100. In the start of December there was a slight decrease to 71 and then an increase over the next month to 503.

Only two of its five districts are hotspots. DM/MC