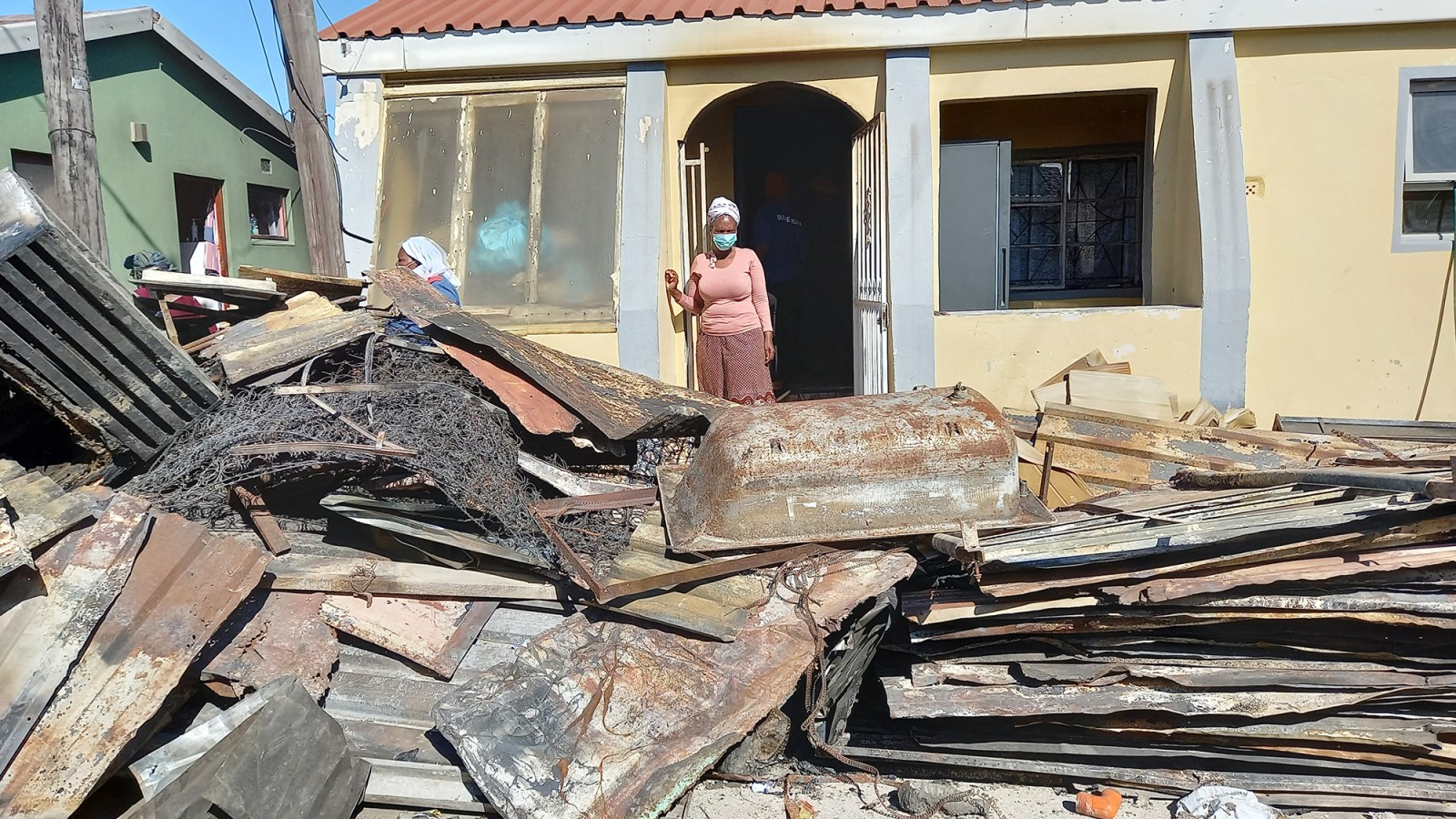 More than 150 homes were destroyed in a fire that tore through Taiwan informal settlement on New Year’s Day in Khayelitsha Site C, Cape Town. Residents are still trying to rebuild, days after the disaster. (Photo: Sandisiwe Shoba)

Residents of Taiwan informal settlement in Khayelitsha had a tragic start to the New Year when a fire destroyed 152 homes and displaced 400 people. Social Development Minister Lindiwe Zulu paid a visit to the area on Tuesday and heard community leaders voice their disappointment over the scant aid they’d received from the City of Cape Town.

A smell of smoke hung in the air in Taiwan informal settlement, Khayelitsha, where a fire on New Year’s Day destroyed 152 homes, leaving 400 people homeless. Heaps of burnt metal stretched across the sandy settlement where community members were using charred scraps to rebuild their homes. When Social Development Minister Lindiwe Zulu arrived at the site on Tuesday she was surrounded by community members begging her for help.

Apart from homes, ID documents, Sassa cards, clothing, medication and other essentials were destroyed in the blaze.

The Taiwan inferno followed another fire in Masiphumelele township on 17 December, which destroyed about 1,000 homes and displaced more than 6,000 people. Zulu, along with provincial department of social development officials, visited that township on Monday as mattresses, blankets, dignity packs and Social Relief of Distress grants of R1,860 each were distributed.

Human Settlements Minister Lindiwe Sisulu said R32-million had been set aside for immediate relief in the form of temporary structures, water and sanitation facilities for affected Masiphumelele residents. Long term, a R200-million housing project was announced in December to build 2,800 homes over the next four months. The structures will be made of fire-resistant materials and will cost about R64,000 each.

No firm plans have been proposed for Taiwan, but Sisulu said she wanted the settlement declared a disaster area.

Nonkoliso Satu, 61, who lives in a brick house on the edge of Taiwan, said the fire that broke out at around 8pm on 1 January destroyed most of the home she’d built with her pension money.

“Everything in the bedrooms burnt down, from cupboards to beds and my shoes,” she said. Satu who was at home with her 74-year-old husband when flames engulfed the structure, fled in her nightgown and had to borrow clothing the next day. The remains of a bathtub, kitchen utensils and a stove could be seen among the ash and rubble.

The cause of the fire is still unknown.

Earlier, Zulu held a meeting with community leaders in the nearby Blue community hall, where chairperson of the Khayelitsha Development Forum (KDF) Ndithini Thyido expressed disappointment over the scant aid the community had received from the City of Cape Town.

The municipality was unable to provide starter kits to rebuild homes due to budget cuts.

“We can no longer have a situation here in Khayelitsha where the majority of houses are informal, but there is no preemptive budget allocation to anticipate the fires,” said Thyido.

He emphasised that “shack fires” were a well-known recurrent problem. “Why are we always at the end of the priorities of the government in Cape Town?”

Zulu complained that, in the Western Cape, local, provincial and national government bodies battle to work cohesively in managing disasters.

“What can help us is to have a properly coordinated approach to our work,” she said, adding that a lack of cohesion wasted money, energy and created conflict.

Affected residents are being sheltered at a nearby church while Gift of the Givers has provided meals. As part of the relief, Sassa provided dignity packs and was given a list of affected residents who needed further relief.

Lindelwa Sinyondo, a ward committee member, told Zulu that while some people were sheltering in the church others had been forced to sleep outside to protect their building sites and materials — including a wheelchair user and mothers with children.

Thyido raised concerns that those affected were now at greater risk of being infected by Covid-19.

“With the fire victims who now find themselves in various clustered or congested community halls or other intervention areas, the worry is that, if nothing happens soonest, we may just be sitting on top of new superspreaders for the coronavirus.”

“Khayelitsha is the only sub-district in the metro where the second wave has not exceeded the first,” said Bianca Capazorio, spokesperson for Western Cape Premier Alan Winde.

According to head of the provincial health department Dr Keith Cloete, there’s no proven scientific explanation for the reduction in cases, but a number of factors could be responsible.

“We’re working with a hypothesis at the moment that, because the infection rate in Khayelitsha was high, and it was higher in Khayelitsha compared to other parts of the metro, an inherent immunity residual in Khayelitsha mitigated against the rapid spread of the second round,” said Cloete during an update on Covid-19 in the Western Cape on Tuesday.

Capazorio said results from a seroprevalence study conducted by the provincial health department and NHLS after the first wave of infections found higher levels of Covid-19 antibodies in people living in densely populated districts such as Khayelitsha, which could account for the lower number of infections this time around. DM