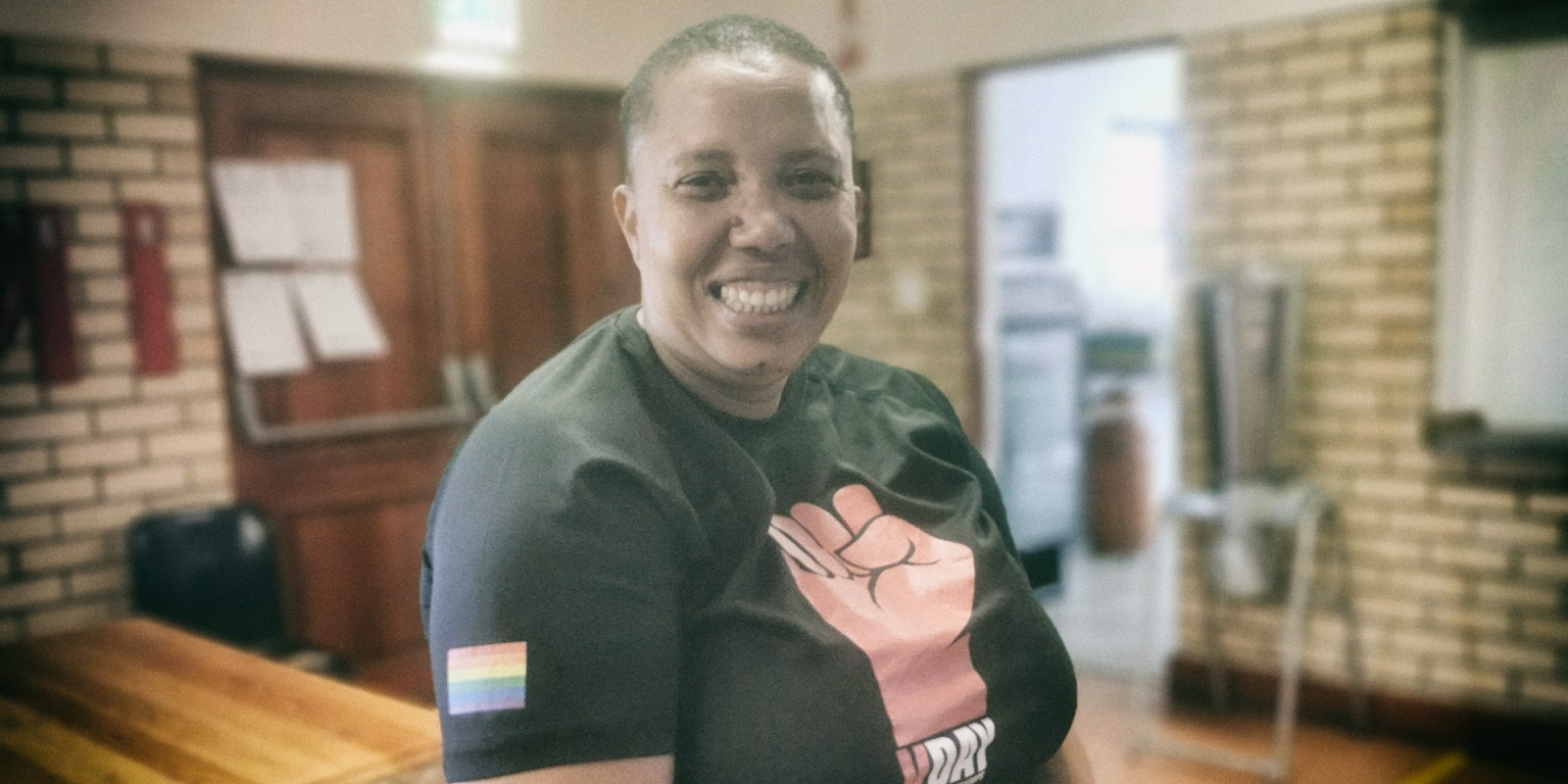 A 10-year goal to open a safe space for her community is finally coming to fruition for Lucinda Evans, a Cape Town activist.

Brightly coloured shipping containers line a field in Retreat, Cape Town, the new safe space set up by Philisa Abafazi Bethu (PAB), founded by Lucinda Evans. It will become “a space of healing, it will be a safe space”.

The site, situated on what used to be a gang hotspot, has been transformed by multiple shipping containers that will make up administration offices, community halls and eight safe spaces for women, children and LBTQIA persons.

Evans, a respected figure in activist circles, is a busy woman. On the day Daily Maverick was scheduled to sit down with her about the new centre, she whisked us off to a fellowship with her seniors’ club, which she has run for the past 12 years.

At the fellowship, she asked the seniors what type of services they would like in the new year. Some responded with calls for driving lessons, some wanted assistance with procuring identity documents, and others expressed jubilation at the announcement that there were plans in place for a weekend away in 2021.

Evans said “gender-based violence [GBV] comes through very strongly” in the conversations she has with the seniors, which include topics around protection, financial stability and creating wills.

“So, there’s a very strong protection request from the seniors and things like health, exercise and they want to go away for a weekend, but I flagged the concerning part – which is the will, the safety and also financial safety.”

PAB had been based at nearby Sullivan Primary since June. In March, PAB was evicted from the premises of a school in Lavender Hill. When South Africa went into the Covid-19 hard lockdown, PAB and its volunteers worked from Evans’ garage to distribute 3,000 meals across 10 hubs in Lavender Hill.

When asked about running an organisation during Covid-19 and lockdowns, Evans said one day in particular stood out.

“What killed us was the day in July and it was 80% rain and one of our biggest hubs on a field in Southern Hills in Lavender Hill had over 500 people there. When we came in that 80% rain, those men, women and children were standing social-distanced, covered in the purple blankets we gave them a week ago. They were soaked.

“What killed me, angered me, what made me frustrated, there were no halls or church halls open for the people to go in and they were waiting patiently for us. You know, the image for me was the steam in their faces with the rain coming down, and for me, it touched my soul.”

She wanted the government to support the food relief programmes, but that did not occur. Instead, Evans and PAB gained support from organisations and businesses such as the Rotary Club of Newlands, Polyoak, and Breadline Africa, which supported them until June, and the Charlize Theron Foundation, which supported them until the end of November. During lockdown, Evans said people from as far as Stellenbosch and Elgin came to provide assistance with food relief.

But how did Covid-19 affect PAB’s ability to provide the services it had provided pre-lockdown?

“It disjointed us. Our safe house was filled to capacity, the entire March to November we were full, and of course, the scale of violence went higher… it made us more attuned to think differently about what our response would be to gender-based violence as our core function but how to address that in the space where we were doing the Covid things as well.”

The safe house is not operational yet because of a lack of electricity at the centre. Funding for the centre came from Swedish Queen Silvia’s World Childhood Foundation as well as Peninsula Beverages, along with the Rotary Club of Newlands and Breadline Africa. Evans said PAB did not yet have assistance from local or provincial structures, but was engaging to change the situation.

She said the new safe space is, “a place where families will be restored, it represents hope. It represents the second chance in an area where people think no hope can come from anything, and especially that space that was causing so much harm and pain to the community and the violation of women.”

The area used to be frequented by gangsters, and Evans said a woman had been raped there.

“I have changed the narrative, that’s why in my opening I said we are sanctifying the space, it will be a space of healing, it will be a safe space.”

The conversation returns to gender-based violence and 16 Days of Activism for No Violence against Women and Children.

“No, I don’t believe in 16 Days of Activism, I did not wear black,” she said, adding the South African flag should fly at half-mast all year round and that people should wear black every day.

“I think the president should be ashamed of himself to equate gender-based violence with Covid-19 when there was more femicide and more women dying of GBV than Covid, so no, I don’t believe [in 16 Days of Activism],” she said.

“I don’t think the president is very serious about the pandemic [of GBV] in this country and I believe as a KhoiSan woman that women in this country are not too angry, we have not arrived at being very angry at the war on our bodies.

“I also think that women in this country should start thinking about governing themselves – I am ready to be led by a woman. I don’t believe in the fundamentals the ruling party claims they stand for.”

The conversation turns to a previous Daily Maverick interview with Evans in September 2019, following the #AMINEXT protests.

Read in Daily Maverick: ‘You will not moer us today’: Lucinda Evans to police at the #AmINext Parliament protest

Has there been any change since then?

“No, I don’t think so because if there is progress made, when the president said no bail for preparators on the 7th of September, why did a person like [name redacted], an affluent person, get bail? Why is he using the very same law to gag us from even mentioning his name? I should actually say, ‘the influential jazz artist’ – so why?”

“So why is the MP of Mpumalanga who [allegedly] raped his eight-year-old twin daughters still doing ANC work in Mpumalanga? So, nothing has changed, the president lied to us.”

Evans said the agricultural programmes are “directly linked to Covid and food security so that we offer the community alternatives in terms of how to grow your own food. We’re very excited because we now have space to do that.”

The centre is surrounded by purple and shades of lavender.

“Lavender is calm, it’s good, it’s beautiful, it settles,” said Evans. “Purple is also royalty – why not a royal centre in a community that has been labelled everything but royal? It was a woman with a royal title that took my hand as a woman that believed people should be treated like royalty – that is why it’s purple.” DM