IN THEIR OWN WORDS: #AMINEXT ACTIVISTS

‘You will not moer us today’: Lucinda Evans to police at the #AmINext Parliament protest 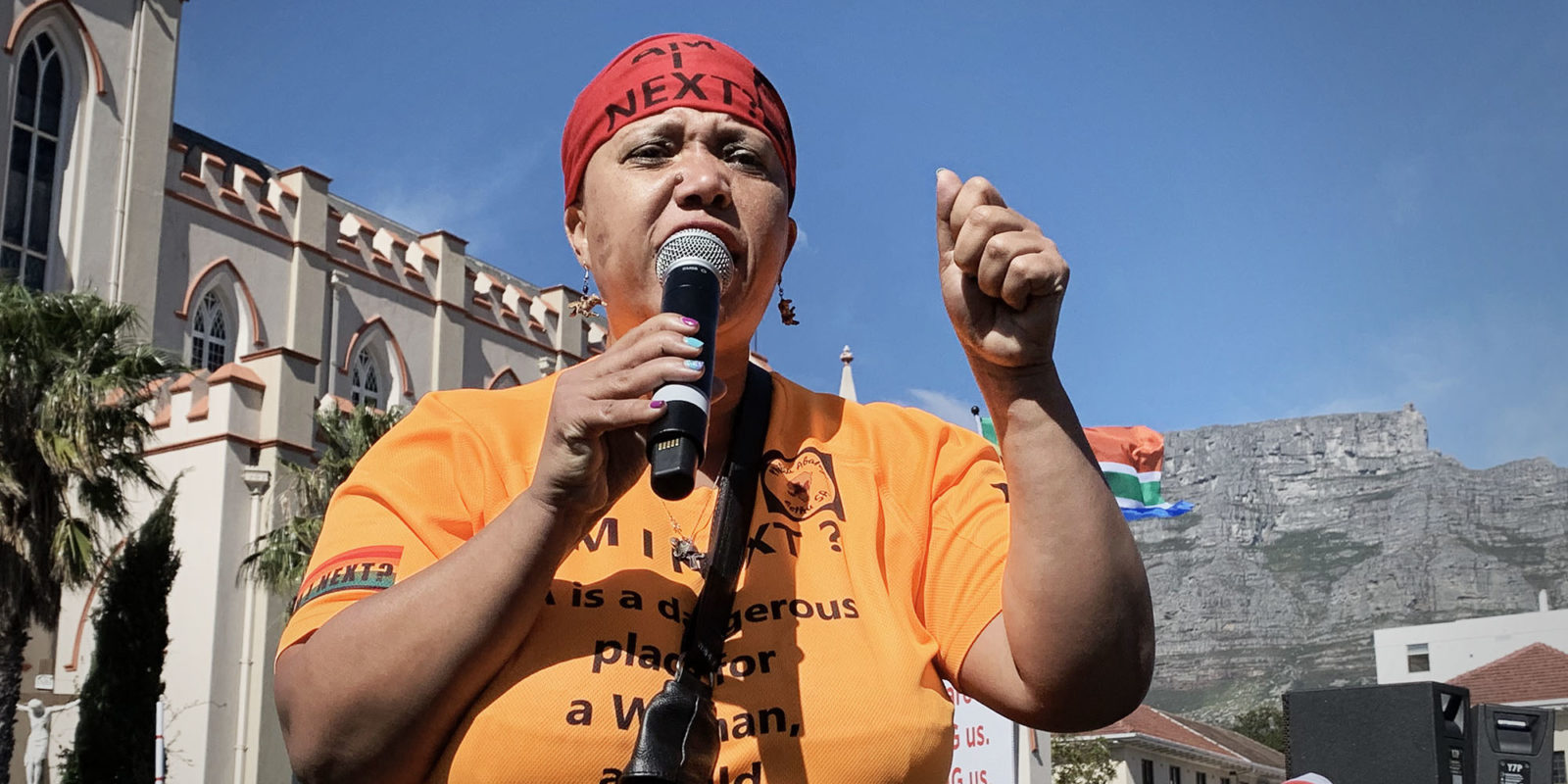 It’s a cold and rainy day in early September, a week after her now-famous speech outside the gates of Parliament, when activist Lucinda Evans sits down with Daily Maverick. The #AmINext crowd that gathered at Parliament on 5 September 2019 was loud, angry and frustrated. Evans was one of the women who calmly and passionately addressed the crowd. She also addressed the police: ‘You will not moer us today.’

Sitting at her base, the offices of Philisa Abafazi Bethu in Lavender Hill on the Cape Flats, Lucinda Evans is as measured as she was on Thursday 5 September 2019. Evans was one of the speakers at the mass protest outside Parliament calling for government action against gender-based violence and femicide.

“For me, when I looked at the video on Wednesday (4 September) and saw how the police were using their stun grenades and water cannon, I lost my marbles! One of those students could have been my daughter, they are my daughter’s age and they are speaking about something as fundamental, in terms of safety, which impacts a 90-year-old ouma and a one-year-old baby. And yet that brutality is towards them!” she said.

So, the next day when Evans was invited by FightBack SA to speak on the stage outside Parliament, she knew what she needed to do:

“When I was asked that morning to say something, my intention was all of those young women needed to be protected… I took the mandate from the crowd, but first I am a woman and secondly, I am a mother. And as I looked over the crowd and I looked behind me, I saw these men, and yes, they are fathers too, and the women police officers, they are mothers too. And they work within the framework of an instruction, whatever their instruction is.”

Evans knew she needed to protect the protesters outside Parliament, but she also wanted to make sure the police knew that they were being protected.

“I’m sure if we were in a position to ask, would you want to do this, we know what the answer is going to be. So I wanted to safeguard the young women and the young men that were there – rightfully speaking about protection, but I also wanted to protect the protectors – in terms of what if you are conflicted over the instruction, what if you didn’t want to do it? Maybe your daughter was among the crowd? Maybe your sister is there? So I came with intention.”

But the day was not easy, Evans admits, as the atmosphere was tense.

“If I were not in protection mode and the atmosphere was created where we said, you know what – let go. You know what a tear-storm flood that would have been?

She explained that the crime is more than the penetration and the perpetrator: “It is the system that we have. The system that we still have – our deputy president is not a woman, our deputy minister of police is NOT a woman and in that system, I feel that when we unleashed whatever we unleashed, on the 5th of September, it is speaking about those narratives.

Speaking to her, one immediately sees she was inspired by the young women who led the protests against the backdrop of the murders of Uyinene Mrwetyana, Janika Mallo, Leighandre Jegels and the countless other women and children murdered in South Africa.

“I have the biggest admiration for the student leaders and the women who have been leading the charges; from #TotalShutdown to what happened in the last eight days,” she said, adding that she wanted to thank them for their committed activism.

So who inspires her?

She says she is inspired by the group of women she meets up with monthly. The group is made up of community activists in Hanover Park and Delft, a doctor, someone who works in search and rescue operations with missing children, and another person from Ashton in the Boland.

“I admire them… And they’ll give you a different story, they’ll tell you I’m the one that gives them the voom and the sterkgevrietness (stubbornness).”

She cites Maya Angelou as her Woman Crush, saying Still I Rise is a poem she reads all the time. Another of her heroes is Dr Mamphele Ramphele, from whom “I learnt so much about humility”.

It is clear that Evans is inspired by the women around her, which can also be seen in the name of the non-profit organisation she founded, Philisa Abafazi Bethu, which roughly translates as Heal Our Women.

She told Daily Maverick where the name comes from:

“Philisa Abafazi Bethu was born in the Eastern Cape… my heart resonates in the Eastern Cape because it was those women on the bridge when I was sick that helped me. Rural women. I am a city woman, I drove a car, I was sick at the Umzimvubu river and those women – when I was there for that period of time, they nursed me, they didn’t ask questions. They did not worry about the texture of my hair or the colour of my skin. They weren’t worried – I was a woman, I was vulnerable – they took care of me.”

It could be said that she is still paying forward the kindness visited upon her by those women. And with that drive to heal our women at the forefront of her consciousness, what is next for her?

A 365-day campaign, One Billion Rising, which will focus on the frontline issues of victim support rooms and victim empowerment programmes for volunteers at police stations. Better training and debriefing for those who are at the frontline of dealing with survivors of gender-based violence and crime: “Who debriefs the police? Who debriefs the journalists? Who debriefs the ambulance personnel?” she asks. DM

Sam Sole for amaBhungane • 14 hours ago