They wanted the president, instead they got stun grenades and a water cannon 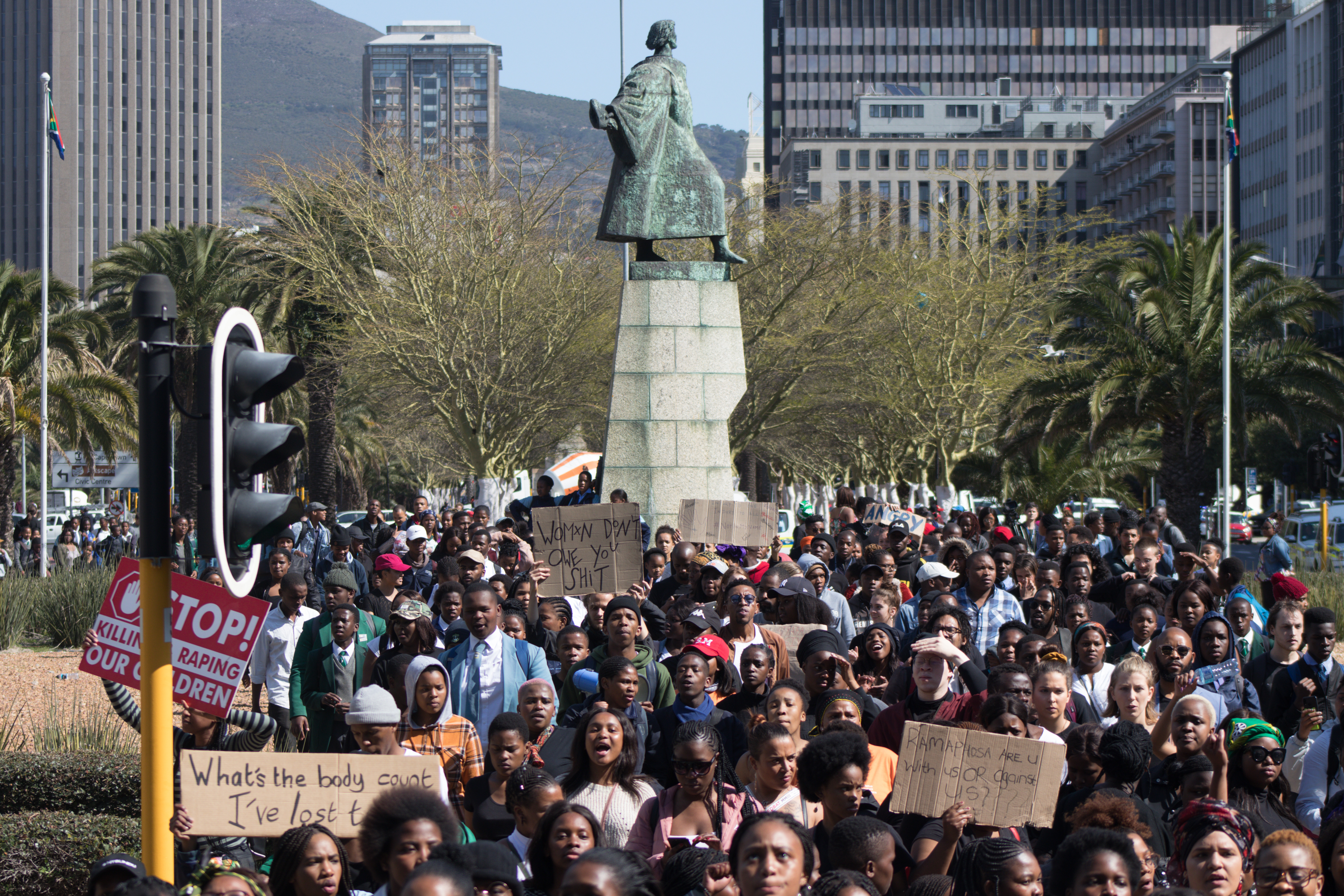 Those involved in the march against femicide and gender-based violence were met with force by police at the Cape Town City Centre on 4 September 2019. Photo: Noah Tobias

On Wednesday 4 September, protesters marched to the Cape Town International Convention Centre (CTICC) calling for President Cyril Ramaphosa to leave the World Economic Forum on Africa to address them on gender-based violence and femicide in the country.

“I’ve been at countless protests and the reason why we are here today is because, as we all know, today is the World Economic Forum and clearly we are led by a man that cares more about the money he can make than the women and children that are killed and abused every day in his country,” said Shanice Appels, a 21-year-old student from Mitchells Plain on the Cape Flats.

The man Appels was referring to is President Cyril Ramaphosa, from whom protesters on Wednesday 4 September wanted accountability and action about the countrywide gender-based violence and femicide.

Read in Daily Maverick: “I am marching for women in the future”

When the president’s chair on the interim commission on gender-based violence and femicide, Dr Olive Shisana, came to address them in the morning, saying: “I sympathise and empathise with them,” the protesters were having none of it.

They shouted: “We want Ramaphosa!”

The group, which at this stage had grown larger, marched to Parliament, where the #AmINext? protest was taking place. The two protests then joined forces and became a unified march.

The by now 1,000-strong group decided to go to the CTICC where Ramaphosa was attending the World Economic Forum.

When the group reached the CTICC, police shoved some of the protesters away from the doors. The crowd moved back without incident. The group waited and sang. Waited and sang, hoping for Ramaphosa to appear and address them.

After nearly two hours of singing and waiting, some in the crowd lost enthusiasm and some had to return to work. The core group of protesters decided to walk to the N1, a short distance away, to prevent cars leaving the CBD.

Approaching the N1 they were met by police who greeted them with stun grenades. The protesters moved to the N2, blocking one of the lanes.

The police then fired stun grenades and aimed and let off a water cannon at the protesters after they sat on the ground, singing protest songs.

When a police official announced: “You have five minutes to clear the scene”, a woman in the crowd grabbed another and said, “No one is going to harm us.”

Police fired two more stun grenades into the crowd, and forcibly detained two people. When the crowd saw the police manhandle a young woman, they shouted: “You are supposed to protect us!” The police again fired water cannons into the crowd.

The crowd headed back to the CTICC, where police had barricaded the entrance with a wire fence. Again, they called for the president to address them. The police then fired three stun grenades into the crowd. People ran in all directions, there was shouting and panic, but no one seemed to be injured.

When Ramaphosa did not appear to address the people or listen to them, Chris Nissen of the South African Human Rights Commission stepped in to try to speak to the crowd, but they rejected him.

Speaking to journalists soon afterwards, Nissen said: “What happened today here, must never happen again, because it’s a cry, it’s a cry for government and for society: Enough is enough.”

When this reporter left the CTICC at about 3pm, some of the protesters stayed behind, saying they would be back for Thursday’s picket at Parliament, while others attempted to march to the Waterfront. By 4pm, there were unconfirmed reports that eight people had been arrested during the protests. DM