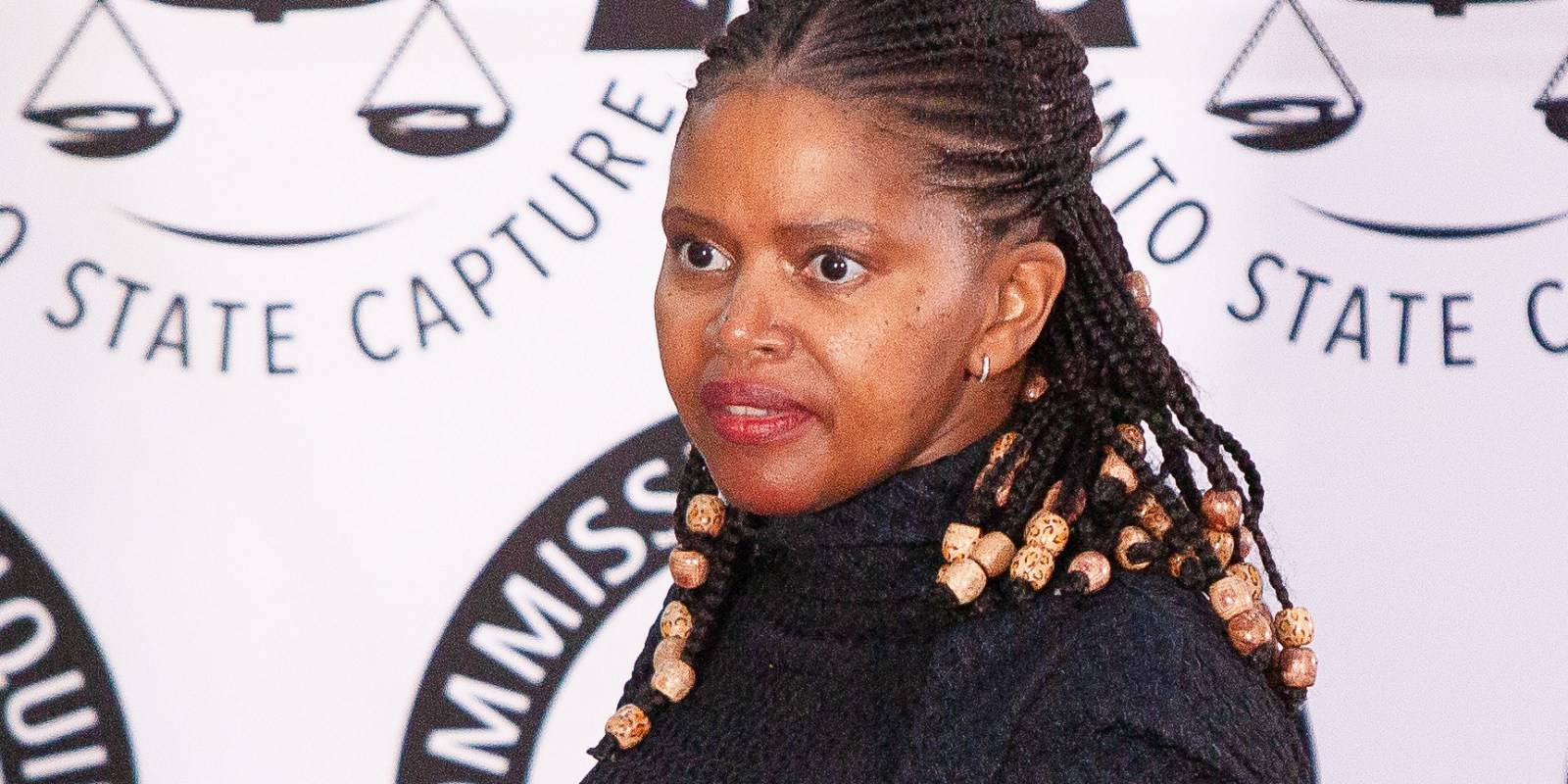 Former Regiments principal Mosilo Mothepu was forthright as she spoke about how Regiments CEO Eric Wood casually told her over morning coffee, more than a month before the event, that Zuma was to fire Nene. (Photo: Gallo Images / Papi Morake)

Evidence before commission chairperson Deputy Judge President Raymond Zondo revealed how Gupta company Regiments Capital was set up to benefit from the Cabinet reshuffle, which shook investor confidence and raised South Africa’s long-term debt by up to R5-billion as the rand and bond costs plummeted.

The impact of Nenegate: No, You can’t simply pick up a plunging rand

Taking the stand, former Regiments principal Mosilo Mothepu was forthright as she spoke about how Regiments CEO Eric Wood casually told her over morning coffee, more than a month before the event, that Zuma was to fire Nene.

At that stage she had “a good relationship” with Wood, who had wooed her back to the company after she had left to work as associate director in infrastructure projects at KPMG.

Mothepu said when she left Regiments at the end of 2010, the company had 50 employees, but when Wood headhunted her back in May 2015 with an offer of R1.7-million a year and a R500,000 sign-on bonus, Regiments had grown to 250 employees and had contracts with global consulting firm McKinsey & Company for Eskom, Denel, SA Express and Transnet.

“It felt good to be part of a transformed black advisory firm,” she said.

But within six months of taking up her new position on 15 June 2015, doubts began to creep in.

When Wood told her Nene would be fired, she didn’t think much of it, being “bored” with Zuma’s continuous Cabinet reshuffles.

Wood, with whom she shared professional and personal stories over their regular 7am coffee, did not say who the new finance minister would be, but said he would be “more pliable” and approve various projects such as a nuclear deal and hybrid capital projects.

Mothepu said all she knew of the nuclear deal was what she had seen in the media, but Wood had been trying to sell hybrid capital projects to Eskom and Transnet, although had been frustrated by their boards.

Questioned by evidence leader Pule Seleka SC, she explained that hybrid capital involved raising an “instrument that has the characteristics of equity and debt”. It resulted in increased capital which looked good on the company accounts, while deferred interest payments meant rating agencies did not see an increased debt-to-income ratio.

However, the deferred interest payments, or “subordinated debt”, meant the client ended up paying more interest than it otherwise would have, which was possibly why the Eskom and Transnet boards were reluctant to accept them.

On 26 October 2015, just hours after Wood told her Nene would be axed, he emailed a document to Mothepu, telling her to save it. She noted that according to court papers in which Regiments directors were suing Eric Wood for being a delinquent director, Wood emailed the same document to Gupta lieutenant Salim Essa.

The black bank would be to ensure state business supported black industry, with municipalities, SOEs and state wage accounts using the black bank as opposed to existing commercial banks, while the black insurer would provide insurance for all government vehicle fleets and aircraft.

Mothepu reflected that it was that same Monday morning that, according to former deputy finance minister Mcebisi Jonas’s testimony, Jonas was telling Nene how that weekend the Guptas had tried to bribe him with R600-million to take the position of finance minister.

What the Guptas wanted from Mcebisi Jonas

She said that some time later, in November 2015, Regiments financial director Tebogo Leballo told her Mohamed Bobat, who was principal at Regiments Management Consulting, was going to be the new finance minister’s special adviser.

It was during the same month that Eric Wood and Salim Essa wanted to form Trillian Capital Partners.

Then on 9 December, she received a call from her life partner, Vusi Mavimbela, who was SA ambassador to Zimbabwe, telling her Nene had been fired and replaced by Des van Rooyen.

“On that morning, after Nene’s firing, I walked into Eric Wood’s office and said ‘you were right’. He said Mohamed Bobat would be the new minister’s special adviser and essentially set up a team at Trillian with special expertise and they will execute these new initiatives and will give us insider knowledge so when tenders come we’ll have privileged information.”

She said Bobat was supposed to have been special adviser to the minister for two years and then return to Trillian.

However, she said Bobat did not resign from Regiments. He continued to receive a salary for a further two months, retained his Regiment’s laptop and even had a Regiments driver dedicated to driving him to and from Pretoria every day.

When public outrage at Zuma’s reshuffle forced the president to remove Van Rooyen just two days after his appointment – earning him the moniker “weekend special” — and shift him to the Department of Cooperative Governance and Traditional Affairs (Cogta), Bobat stayed with Van Rooyen.

Meanwhile, she said, in a bid to hoodwink the other Regiments directors after reporter Barry Bateman broke the news in February 2016 that Bobat was van Rooyen’s special adviser, his resignation was backdated to December and slipped under a pile of papers on Wood’s desk to create the impression that his resignation had simply not been processed.

She believed the plan was to keep Bobat on the Regiments payroll until the biannual bonus payout in April. As compensation when that didn’t work out, she said he received R1-million from Essa.

Seleka, consulting the founding papers lodged at the Gauteng Local Division of the High Court in October 2016 by various applicants and Regiments Capital against Eric Wood and five other respondents, confirmed Mothepu’s narrative regarding Bobat’s continued employment at Regiments.

She said on the morning Van Rooyen was shifted from finance to Cogta, Van Rooyen had called Wood.

“We were in the same car coming back from Transnet and I was with Mohamed Bobat and of course they had appointed a public relations team to write the minister’s speeches. They had prepared a National Treasury speech, but over the weekend his portfolio had changed so Eric (Wood) had to ensure  public relations wrote a new Cogta speech.”

She said Bobat “spent a lot of time” at Melrose Arch meeting Essa and Wood while he was special adviser to Van Rooyen, with Bobat mandated to give Trillian insider information on tenders.

She said by January 2016 her relationship with Wood had deteriorated, but she still got information from Leballo. She was “shocked” when Leballo whispered to her on 16 March 2016 that Zuma planned to fire Pravin Gordhan, who had been brought in to replace Van Rooyen as finance minister.

“I felt the advancement of capturing Treasury was still happening.”

“It was a Sunday; we met in a steakhouse, ordered two bottles of wine as what I had to tell him was so shocking.”

Zuma replaced Gordhan with Malusi Gigaba in a major Cabinet reshuffle on 31 March 2017.