Engen is ‘still killing us’, says Durban community body after explosion at refinery 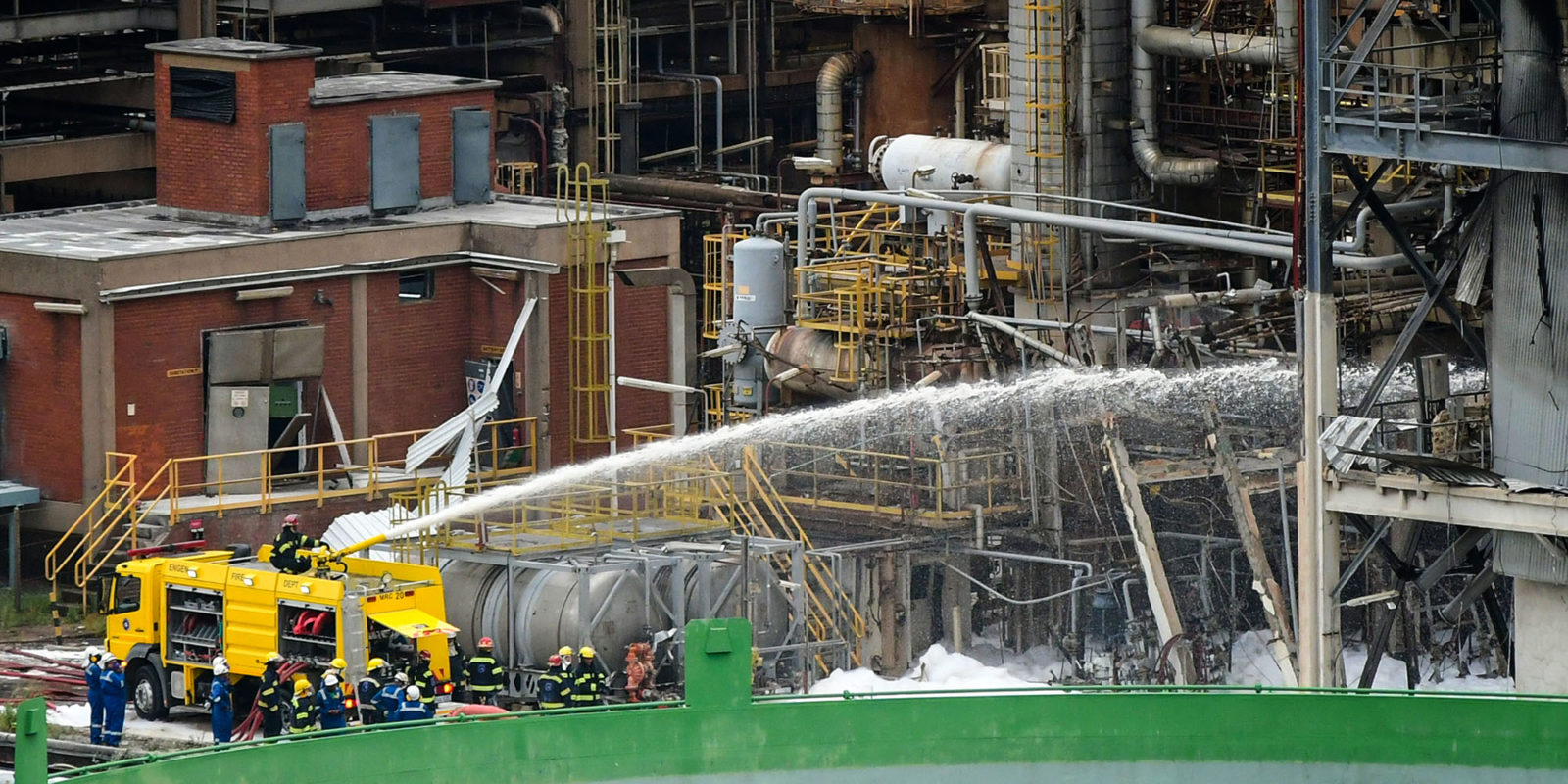 Firefighters work to keep the fire out at Engen Oil Refinery on 4 December 2020 in Durban. According to media reports, residents from as far as Manor Gardens, Glenwood and Pinetown were startled by a massive explosion just after 7am. (Photo: Gallo Images / Darren Stewart)

An explosion at the Engen refinery in the South Durban Basin area was, say residents, ‘no surprise’, given the company’s alleged history of ‘cutting costs’ on maintenance and the government’s carelessness in enforcing regulations.

Desmond D’Sa is angry. A lifelong environmentalist and past recipient of the prestigious Goldman Environmental Prize, D’Sa has had to watch for decades as his community is slowly “poisoned”, disregarded, cast aside or placated by massive industries that the government appears to deem too important to the South African economy to rein in.

The latest “incident” to assault the South Durban Basin area took place on Friday morning at the Engen refinery – not the first, and probably not the last – that left seven people injured, according to authorities, although Engen said in a press statement that “no injuries were recorded”.

List of Section 30 (NEMA) incidents in the South Durban area over the past five years: 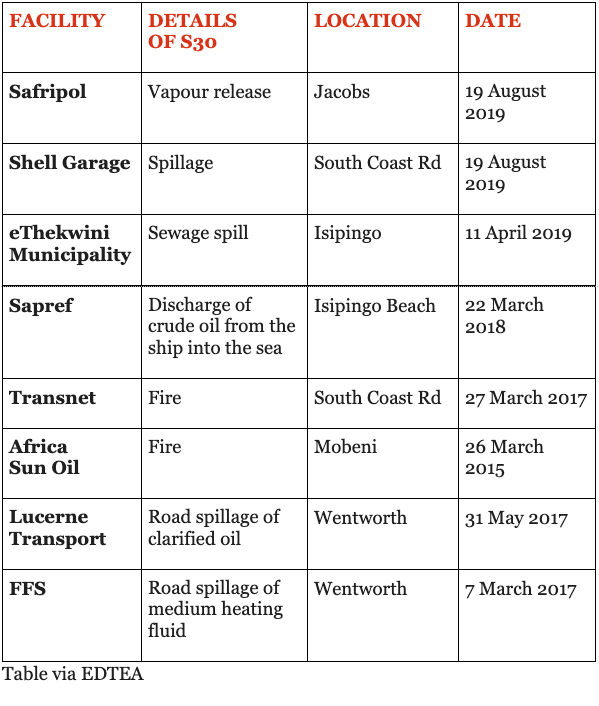 The activists and residents that Daily Maverick spoke to all agreed that the refinery explosion was “no surprise”, given the company’s alleged history of “cutting costs” on maintenance, and the government’s carelessness in enforcing regulations.

The community – particularly children – had been deeply affected by the blast, according to D’Sa. Some were still not sleeping.

It was a tremendous explosion, heard as far as Durban North, about 20km away, and resulted in a massive fire and plumes of black smoke filling the air.

Nearby flats were damaged, and some had caught alight. Residents were treated for smoke inhalation and burns.

The department added that the National Environmental Management Act (NEMA) empowered “the municipality or provincial government to claim reimbursement for all reasonable costs incurred from responsible parties”, should the facility be found culpable following an investigation.

“People are still traumatised. We need counselling, and that hasn’t happened. They must send counselling out there immediately,” said D’Sa.

“Engen and provincial government didn’t send out mobile health units either, despite the fact that they promised me they were going to do that,” he told Daily Maverick. A community doctor had been lending assistance, he said.

D’Sa – the proverbial thorn in the flesh of the South Durban industries – lives about five minutes from the refinery, as the crow flies. Much to the chagrin of the corporates and government, he is most often first on the scene when accidents take place, monitoring and recording.

According to residents, the company had been aloof and “arrogant” following the explosion, seemingly indifferent to the affected community members and their property, including a school that is about 10m away from the facility.

That there is bad blood between the communities – particularly activists – and the company, is no secret, so much so that a planned meeting between a group of community representatives/activists and the company fell flat on Sunday night.

That was because activists Frank Alexander and Melanie Israel were not allowed into the meeting. They, together with three others, were interdicted by Engen after protesting at the national key point in 2018.

The company accused them of not participating in stakeholder engagement meetings and, instead, of protesting and burning tyres outside the plant.

The remainder of the community representatives refused to proceed with Sunday’s meeting if the two were not allowed to attend.

D’Sa told Daily Maverick that the only option now was for Engen representatives to “come out and meet us on the streets”.

The company should view the explosion at the refinery and the interdict against the activists separately, added D’Sa, and Alexander and Israel should have been allowed to participate in the meeting.

“The [NGOs and NPOs] that were supposed to attend the meeting all come with different mandates and all have to report back to different communities.”

Engen’s general manager, Sykry Hassim, did not respond to texts, WhatsApp messages or voice messages from Daily Maverick. The company’s external communications manager, Gavin Smith, said he had only been authorised to release a statement, and could not answer questions.

According to that statement: “Engen is currently assessing its overall bulk fuels supply and demand position and implementing immediate mitigations to manage inventory and product supply requirements.

“In these efforts, the needs of our customers remain our priority and [customers] are assured that the company is working hard to ensure secure supply of core petroleum products to the market.

“Engen will continue to extend its full cooperation with authorities and government agencies in concluding the investigation into the incident.

“The Engen refinery adheres to stringent health, safety and environment protocols and operates in strict accordance with its operating licence requirements.

“Our immediate priority remains the safety and well-being of employees and the neighbouring community.”

The EDTEA told Daily Maverick it had requested a “Section 30 of the National Environmental Management Act (1998) alert report which is required by law to be submitted within 14 days from the date of the emergency incident. This report will detail the cause of the incident, clean-up and the remediation plan thereof.”

Section 30(1)(a) of the NEMA describes an “incident” as “an unexpected sudden occurrence, including a major emission, fire or explosion leading to serious danger to the public or potentially serious pollution of or detriment to the environment, whether immediate or delayed”.

This is all cold comfort to the community and the activists and NPOs representing them, who told Daily Maverick that the “lies” coming from Engen “just don’t stop”.

According to Bobby Peek, a director at environmental justice group groundWork: “When it comes to Engen, we have a lack of credible information from the industry and government. What we do know is that the refinery is old, poorly maintained and does not have any regular government inspection.”

Between 1995 and 2002/2003, he said, the community and activists were able to access information about the refinery because of the intervention of former president Nelson Mandela.

“But when the politics realigned, Engen was emboldened enough to tell the community to ‘fuck off’.”

It was well known, said Peek, that Engen was “one of the biggest polluters in the basin”.

He said that the government and the company should be “forced to clean up the area, or we will be a global hot spot”.

“We believe there must be reparations made to the community, so that the past is accounted for. Engen has constantly refused monitoring on their fence line for volatile organic compounds (VOCs) such as benzene and sulphur dioxides.”

As for Friday’s blast, he said simply: “I live in Glenwood [about 15km away] and I could feel the earth shaking.”

The latest incident makes a mockery of eThekwini Municipality’s stated intentions of cleaning up the environment, reining in potential habitual abusers, and looking after its vulnerable citizens – the communities surrounding the refinery consist of mostly working-class families, and unemployment rates are high.

D’Sa, Alexander and Peek also agree that a bespoke evacuation plan for the basin communities is a necessity, but getting information on eThekwini Municipality’s actual safety plan for the area is difficult.

Officials have previously told this journalist that an evacuation plan is part of the city’s broader disaster management strategy, but given the deadly materials being dealt with, and the potential for a very quick large-scale disaster, stakeholders deem that response insufficient.

The EDTEA told Daily Maverick that it was not the custodian of the evacuation plan, but “[w]e understand that the local authority is working on amending the existing evacuation plan”.

Alexander responded: “Even if there is a plan in place, it needs to be published. People need to know what the plan is and what to do, schools need to know.”

Engen was considered critical to the South African and provincial economy, he said, resulting in “rules being waived for many years”.

In October a regional newspaper reported that Engen was considering closing by 2023 and transforming into a fuel storage facility.

The EDTEA told Daily Maverick it was aware of the reports, but had been informed that no final decision had yet been taken. “EDTEA is intending to engage with the national leadership of Engen on this issue.”

Alexander said this was not the first time Engen had threatened to close when it did not “get its way with government”.

It threatened to close in 2011 after it was told by the government to “clean up or face prosecution” according to a report by The Mercury at the time. The facility had been deemed an “immediate danger” to residents and the environment following a fire.

When the latest article on a possible closure was reported, then KZN EDTEA MEC Nomusa Dube said the business was “a key player and a leader of the downstream South African petroleum market”.

She said the province was “proud” to have the facility located in KZN and the basin “where it contributes to job creation”, and assigned the head of trade and investment in the province to “engage with Engen to look into this matter”.

The company is 74% owned by the Malaysian government’s Petronas. South African company Phembani holds a 21.2% stake, and a Phembani consortium, according to Engen’s website, owns the remaining 4.8%.

“When Engen doesn’t get its way, they threaten to close, and government jumps,” said Alexander, who together with Israel is part of the South Durban Basin Community Development Trust.

Engen had a “dictatorial relationship” with the community, said Alexander. “It’s toxic”.

“Even without the explosion, they are still killing us. With their latest threat to close down, government again jumped, but the community wasn’t consulted. If they cared anything about people, they would have at least talked to us.” DM

Energy: On the selection of powerships over renewables and battery storage for two-thirds of the RMIPPP programme