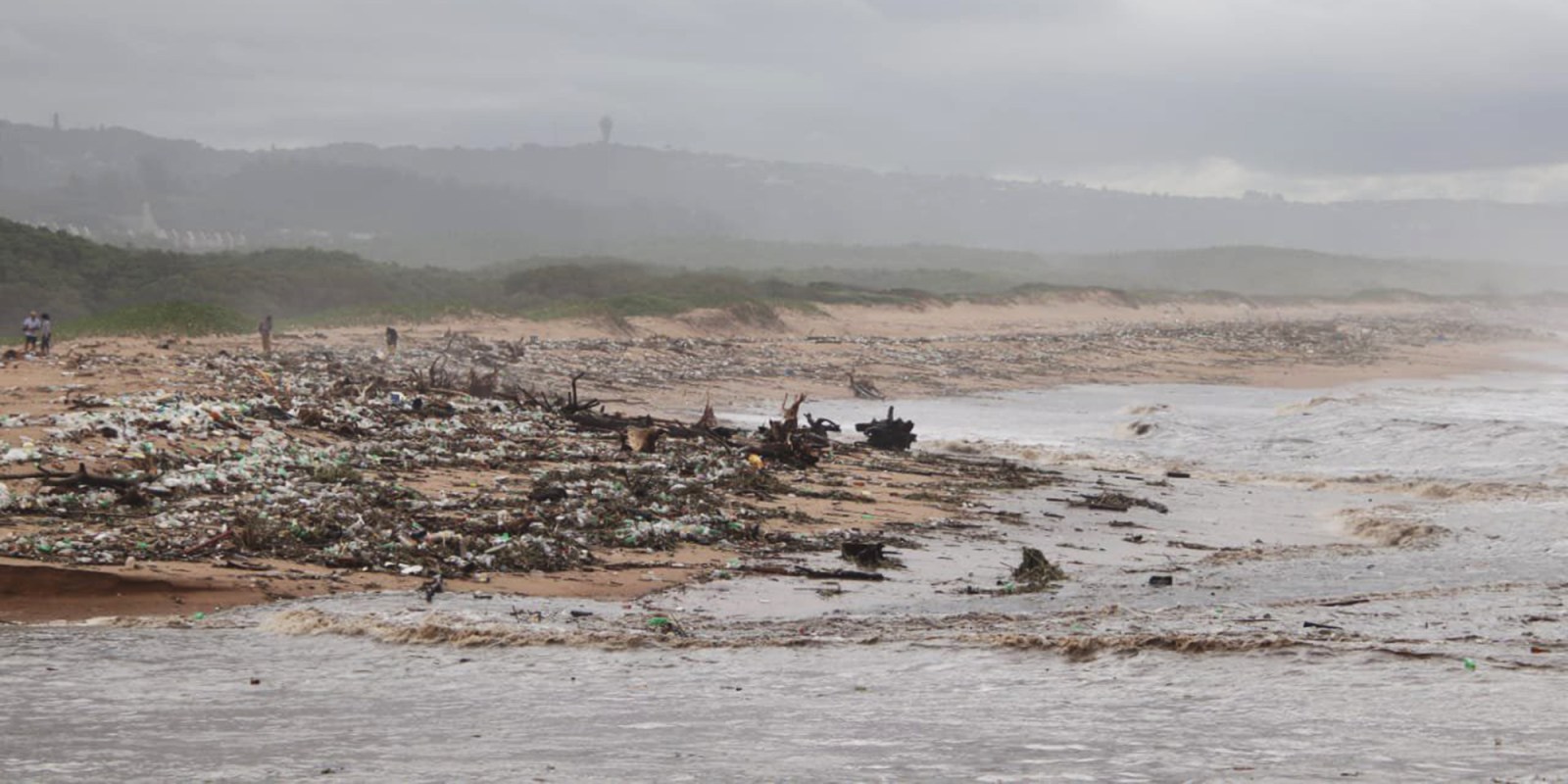 The Durban Floods have really brought to light the huge Plastic Pollution crisis in South Africa. These photos, taken by . @Naeempandor at Blue Lagoon in Durban on 23 April 2019. Photo: Twitter/Greenpeace Africa

The eThekwini Metro has set itself ambitious targets in its recently released climate action plan. But politics, slow growth, delayed delivery on key infrastructural projects and increased congestion could render the goals a wishlist instead of a reality.

The Durban Climate Action Plan (CAP) released earlier in September forms part of a drive by 96 cities across the world to address climate change under the banner of the C40 Cities Network, whose goals are linked to the 2015 Paris Climate Agreement.

But Desmond D’Sa, founder of the globally recognised South Durban Community Environmental Alliance (SDCEA), told Daily Maverick eThekwini was “not serious about protecting the environment” as “no major polluter has been fined or prosecuted”.

“The city ignored the recommendations of its own health study completed in 2007. This study recommended that all polluters must characterise all chemicals that fenceline communities are exposed to,” explained D’Sa.

The C40 cities aim to help reduce average temperature increase by 1.5 degrees Celsius over the next 30 years.

The metro has seen a decline in greenhouse gas emissions but, by its own admission, this has more to do with “national rolling blackouts due to power shortages” that have forced industries to use more energy- efficient technologies.

Plans to cut CO2 levels are behind schedule, with the CAP’s early targets appearing to have been missed.

The rollout of a bus rapid transport system is years behind schedule and overbudget, with a final price tag of R20-billion mentioned, while plans to build a dry port on the city’s outskirts to ease congestion at the Port of Durban are not close to breaking ground.

Instead, the city gave the green light to the building a logistics hub in the already severely polluted Durban South Basin — in an area that was one of the last remaining green lungs in that area, namely the old Clairwood racecourse.

According to the Durban Metropolitan Open Space System (D’MOSS), about 95,000 hectares, or nearly a third of the city’s area, has biodiversity importance but only 9.4% is formally conserved — 3% of the total.

A climate and energy campaigner for environmental non-profit groundWork, Avena Jacklin, said city officials could not provide any certainty on how vacant land would be treated in the next 20 years.

“The city is not going to be able to achieve its D’MOSS targets,” said Jacklin. “The question as to where political considerations will outweigh conservation is tricky as there is no guarantee that what is envisioned now will remain so. Already conservation areas are being encroached on.”

The city’s northern areas of once vacant land are transforming into light industrial and residential areas. with more traffic and energy use.

According to the CAP, the D’MOSS areas are critical to help the city meet its carbon neutral targets. But with more than 600 informal settlements in the municipality, many on river courses and home to more than 300,000 households, eThekwini is under heavy political pressure to build social housing.

For example, the city is set to build a high-density, multi-storey social housing complex in one of the few remaining green zones in Isipingo, South Durban, despite protests by local residents.

D’Sa said that, without political will, goals would not be achievable.

“D’MOSS areas are critical and important, yet in South Durban the planning officials have allowed D’MOSS areas, including the swamps in Reunion, to be destroyed.

This is why the M4 freeway often floods,” said D’Sa. The municipality had not responded to questions by the time of publication. DM168