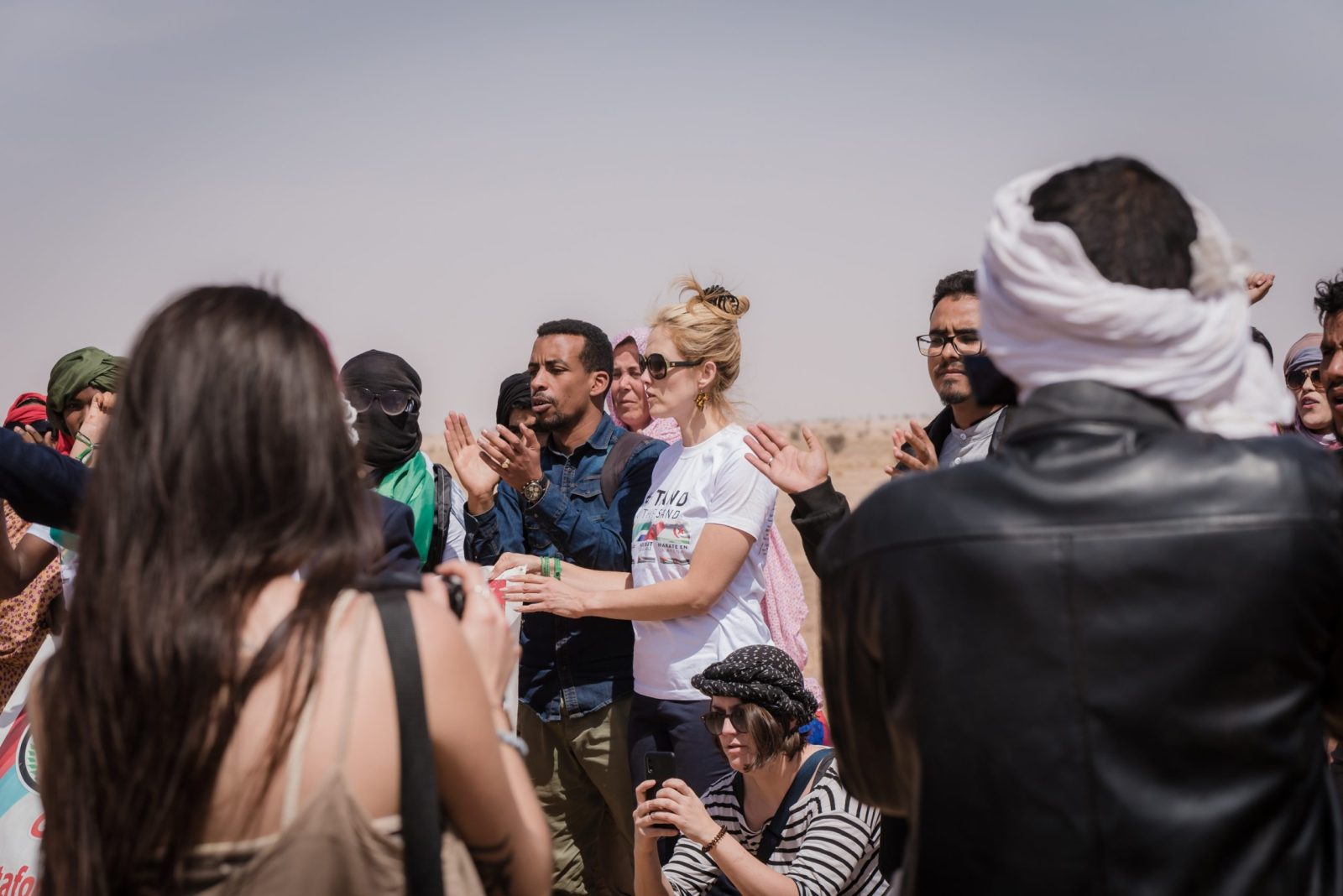 Catherine Constantinides with activists at the Wall of Shame in Western Sahara earlier this year. Photo: Heinrich Knoetze

On the eve of an extraordinary African Union meeting, Catherine Constantinides, board member of the Saharawi Commission for Human Rights and climate activist has written an open letter to President Cyril Ramaphosa, addressing him in his capacity as Chair of the African Union. She appeals to Ramaphosa to address the military violation by Morocco against the people of the Western Sahara. We publish her open letter.

African leaders are set to meet on 6 December, for the fourteenth Extraordinary Summit of the African Union on “Silencing Guns”; when the sound of guns seems to make the news again in many parts of Africa, most recently in Western Sahara since the ceasefire agreement was violated by Morocco on  13 November 2020. I am writing to you, President Ramaphosa, firstly to draw your attention to this critical situation and also to request your urgent and firm response as the Chair of the AU to this unacceptable situation that involves a military aggression and expansionist invasion from a member state of the AU: Morocco, against a founding member of the same organisation.

The people of Western Sahara remain forgotten, put aside, asked for patience decade after decade and this unresolved conflict remains a scar on the consciousness of Africa and the world leaders who have been seated at the table. The issue of Western Sahara remains firmly hushed into the silent background of both the United Nations and African Union where the status quo has been cemented in place because it serves an elite few who benefit from the occupation by the Moroccan regime.

Your Excellency, as you will recall, the Moroccan armed forces, once again, launched and declared an intentional military attack in violation of the UN ceasefire agreement. Moroccan military attacked a group of Saharawi civilians, who were peacefully demonstrating in a buffer zone, the non-militarised Saharawi territory of Guerguerat, in their own land asking for real peace and a real solution to the protracted-conflict in the last colony in Africa.

This new Moroccan armed attack against unarmed, peaceful Saharawi civilians and demonstrators in the buffer zone has never been condemned neither by the UN and its Security Council, nor by the AU and any of its decision-making organs. An attitude that continues within the same old approach by the two organisations that proved to be ineffective having abused the Saharawis, the region and the continent with a 30-year-old false promise of peace. This silence only served to embolden Morocco in its illegal occupation and immense violations of all human and humanitarian laws in this last colony in Africa.

Three decades later and still a lack of political will from the international community to implement its own international legality, MINURSO (the United Nations Mission for the Referendum in Western Sahara) – which was tasked to organise and monitor the referendum for the self-determination of the Saharawi people of Western Sahara – has been reduced to a strange mission whose task seemed to have shifted to “facilitating Moroccan traffic and trade” from an illegally occupied territory, through an illegal breach, opened in a long-standing crime against humanity, which is the Moroccan military wall itself.

Following this new military attack and expansionist adventure through the use of force against a member state of the AU by another member state, the Saharawi government, in legitimate self-defence, declared the entire territory of Western Sahara “including its terrestrial, maritime and air spaces, a war zone”, thus advising all countries and economic operators to steer away from the territory.

This Saharawi response is indeed legitimate, inevitable and relevant since none else seems to have the will or courage to face Moroccan regime to stop it from violating the international law and the Constitutive Act of the AU itself, especially the principles of “respect of borders existing on achievement of independence”, “peaceful resolution of conflicts among member states of the union”, in addition to the “prohibition of the use of force or threat to use force among member states of the union”.

Morocco is not only militarily aggressing the territory of a member state of the AU, it is also committing all sorts of human rights violations against Saharawi civilians, with total impunity. Morocco is exercising intimidation, harassment, torture, forced house arrest, beating of activists and those that have taken to the streets to protest in support of the inalienable right to self-determination. Even children are targeted by Moroccan police. A recent example is 12-year-old Hayat Diya, who was subjected to psychological and physical torture, as well as sexual harassment by police agents who arrested her at school on 16 November 2020 in the occupied city, El–Aaiún. Her crime was wearing an apron carrying the Saharawi Arab Democratic Republic flag!

Saharawi human rights activists, members of the Saharawi Organ against Moroccan Occupation, including its president, Aminatou Haidar (who has been under house arrest since 29 September 2020) are not allowed to receive visitors, and their rights to movement violated. Aminatou, a laureate of various international human rights awards, was even banned from travel last month under the pretext of Covid-19 while other passengers on her flight were not even questioned about their health.

Morocco also targets journalists and media activists. Ahmed Ettanji and Nazha el-Khalidi, two Saharawi journalists were harassed on their wedding day on 21 November. Ahmed has been placed under house arrest and Nazha has been detained in her home. Their homes respectively were forcibly blockaded by police, electricity to their homes cut, doors barred from the outside and they have been prevented from leaving. Both well-known journalists at independent media house Equipe Media, have done extensive work to document the persecution of the press in the occupied territory in Western Sahara by the Moroccan security services.

The armed conflict in Western Sahara brings instability to the whole region and uncertainty to the future of the AU that has so far kept silent about all these Moroccan violations, not only of the international legality but also of the AU Constitutive Act itself.

The Saharawi people have been patient, persistent, respectful of their engagements and of the Organisation of African Unity-UN’s process and peace plan. Instead of being rewarded with a simple referendum on self-determination, they have been stripped of 30 years of their lives, only to be dragged back into an armed conflict because Morocco has once again decided to break its engagements as it has always done – with total impunity.

How is it that no African country sought it necessary to condemn Morocco’s behaviour? What is the message we are sending to the Saharawi people?

For all these reasons and many more, I am addressing your Excellency as the Chair of the African Union, and as the president of a nation that has led a bitter struggle against apartheid, a crime against humanity and injustice, I implore you to push towards urgent action from the AU to end this unacceptable situation. To this end:

Morocco must accede to the legitimate demands and inalienable right to self-determination for the people of Western Sahara. The kingdom has no valid claim to the territory; Western Sahara remains under illegal military occupation by Morocco, which has repeatedly demonstrated its profound contempt for international law and the UN, and remains a brutal occupying power.

Let us be clear, this is a war for liberation; the Polisario Front and the Saharawi Republic cannot be asked to return to a failed ceasefire agreement that did not serve the legitimate rights of the people of Western Sahara to freedom and took from them 30 years in vain. The time for action is now. This must be the final chapter in the fight for liberation, justice and freedom in the last colony in Africa. DM/MC