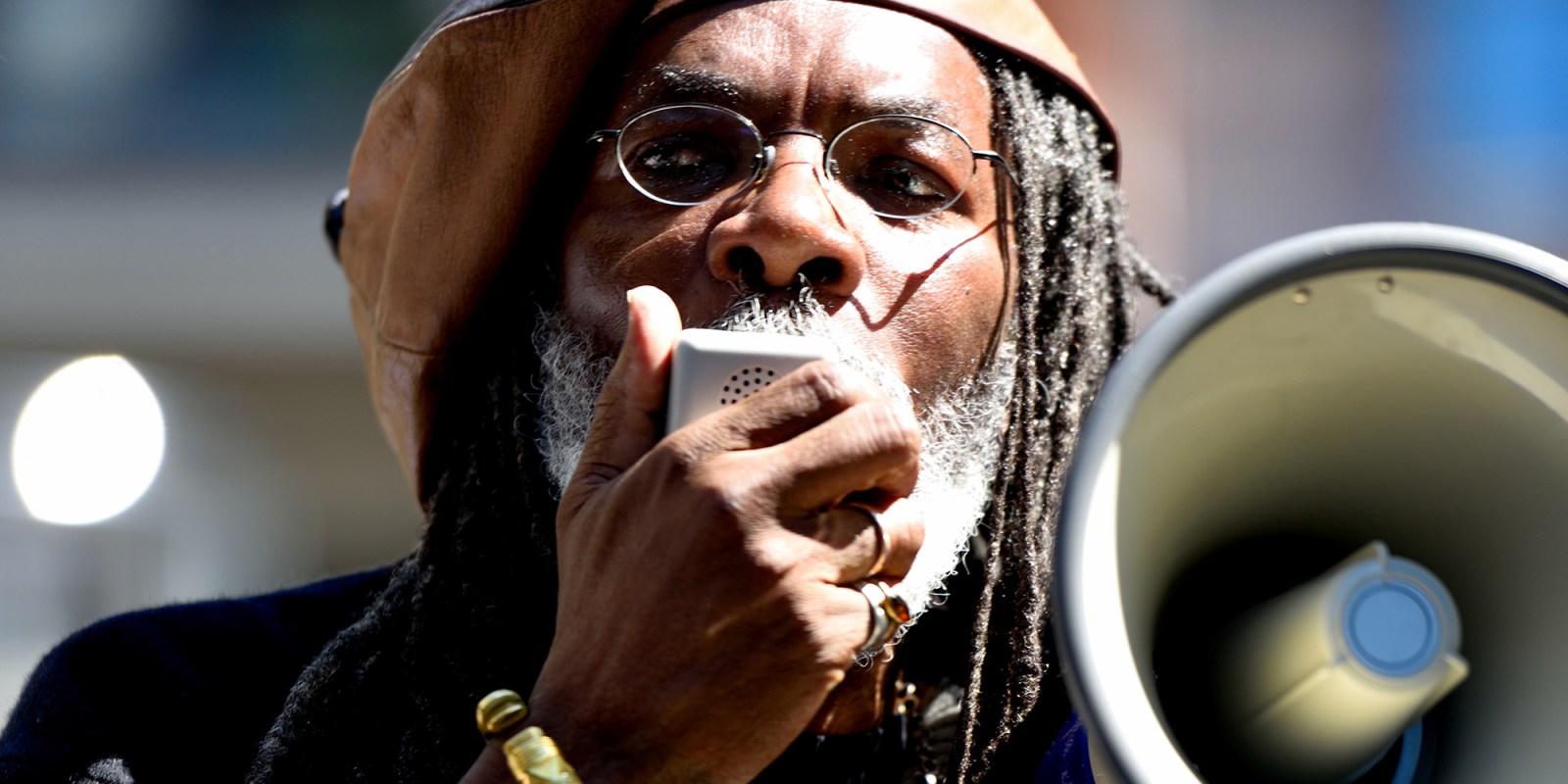 Cecil Gutzmore from the Marikana Support Campaign at a mining protest in support of the Amadiba community. (Photo: Flickr/Thomas Lebert)

Sceptics might be excused for not breathing a huge sigh of relief at the news that the SAPS is investigating death threats against Nonhle Mbuthuma of the Amadiba Crisis Committee. Previous investigations have failed to apprehend assassins, and the investigation into the assassination of ‘Bazooka’ Radebe was allegedly interfered with by senior SAPS officials.

Fuelled by the discovery of rare earth minerals in 2002 by Australian mining house MRC, conflict still divides the Wild Coast community of Xolobeni. This is despite a landmark decision by the Pretoria High Court in 2018 that community members had the right to refuse mining.

One reason for tension remaining high is that the Ministry of Mineral Resources, led by Gwede Mantashe, decided to appeal this decision, arguing that decisions to issue mining licences belonged to the state, and not communities.

A ruling on this appeal is still pending, yet activists in the area of Umgungundlovu (where the village of Xolobeni is located) have drawn hope from a legal decision made on Monday 14 September 2020 by the North Gauteng High Court, stating that affected communities have a right to see applications for mining licences.

The ruling has been celebrated as a “game-changer for mining-affected communities in South Africa”, improving the position of communities in their negotiations with mining companies. But is such jubilation justified?

On 22 October 2020 Fikile Ntshangase, a vocal opponent of the expansion of the Tendele Coal Mine in Somkhele in KwaZulu-Natal, was gunned down in her home. Ntshangase was vice-chair of a subcommittee of the Mfolozi Community Environmental Justice Organisation (MCEJO). Just before her death she revealed that subcommittee members had mentioned a payment of R350,000 in return for her signature on a document promising to withdraw court cases related to Tendele’s existing operations and proposed expansion. These plans would displace 21 families from their ancestral land.

She had refused to sign, saying “I cannot sell out my people. And if need be, I will die for my people.” It was not long before her words would become a tragic reality.

Now in Xolobeni, some 450km south of Somkhele, community members remain opposed to mining. Similarly, proposals for a highway (the N2, billed as a separate project, but essential for moving minerals out of the remote protected area) remain contentious. Nonhle Mbuthuma, spokesperson of the Amadiba Crisis Committee (ACC), the organisation leading opposition to the mining of Xolobeni, is again receiving death threats.

The latest threat was received via SMS. It made reference to the 2016 assassination of Sikhosiphe “Bazooka” Radebe, former ACC chairperson, as murder “no. 1”. It intimated that the death of ACC chairperson Sibusiso Mqadi had been a killing (Mqadi had been hospitalised after weeks of severe abdominal pain, but never recovered and died on 8 November 2020), had been “no. 2”. The text referred to Mbuthuma as “3”, finishing ominously with: “You are next.”

In response, Sanral (South African National Roads Agency Limited), the state-owned enterprise (SOE) with the contract for building the N2 highway, has come out in public condemnation of “threats of violence and intimidation” on the Wild Coast. The death threats received by Mbuthuma are apparently being investigated by the South African Police Service (SAPS).

Sceptics might be excused for not breathing a huge sigh of relief here. Previous SAPS investigations have failed to apprehend assassins of mining opponents. In fact, “Bazooka” Radebe’s investigation was allegedly interfered with by senior SAPS officials.

Moreover, the ACC reports that after failing to gain community consent for the construction of the N2, Sanral has been pressuring communities outside of legally required consultative processes to sell their land.

This state of affairs begs the question of how useful court rulings such as the latest are, if activists intent on defending ancestral lands and rights to socioeconomic self-determination still risk being assassinated, and their killers continue to enjoy impunity.

Sanral’s publicly expressed distaste for the violence that accompanies state blueprints and strategies for development might put distance between them and the murderers and enhance their image. But such protestations don’t alleviate tensions or move toward the sustainable, equitable solutions sought by mining-affected communities.

As Nonhle Mbuthuma pointed out in a press release this week, if Sanral, and ultimately the state, is serious about wanting to support economic recovery, local economies that depend on land for agriculture and ecotourism must not be sacrificed in order to “uplift” the national economy. The notion that the wealth created by extraction trickles down is a myth. It remains in the hands of corporations and well-connected political elites. It always has.

Indeed, as Mbuthuma argues, “the top-down approach to development must fall”.

Action is needed, root and branch. If the state is to begin to fulfil its constitutional and legislative duties to enable the meaningful participation of South African citizens in decision making, it needs to do much more to support bottom-up development processes.

It is also imperative, however, that the state takes swift and decisive action to apprehend and prosecute assassins of community activists defending their rights to shape development processes and futures.

Otherwise, Fikile Ntshangase will surely not be the last to die doing so. DM

Dr Hali Healy (PhD, King’s College London) is Senior Lecturer in the Department of Anthropology and Development Studies at the University of Johannesburg. She is an editorial board member of Worldwide Waste: Journal of Interdisciplinary Studies.