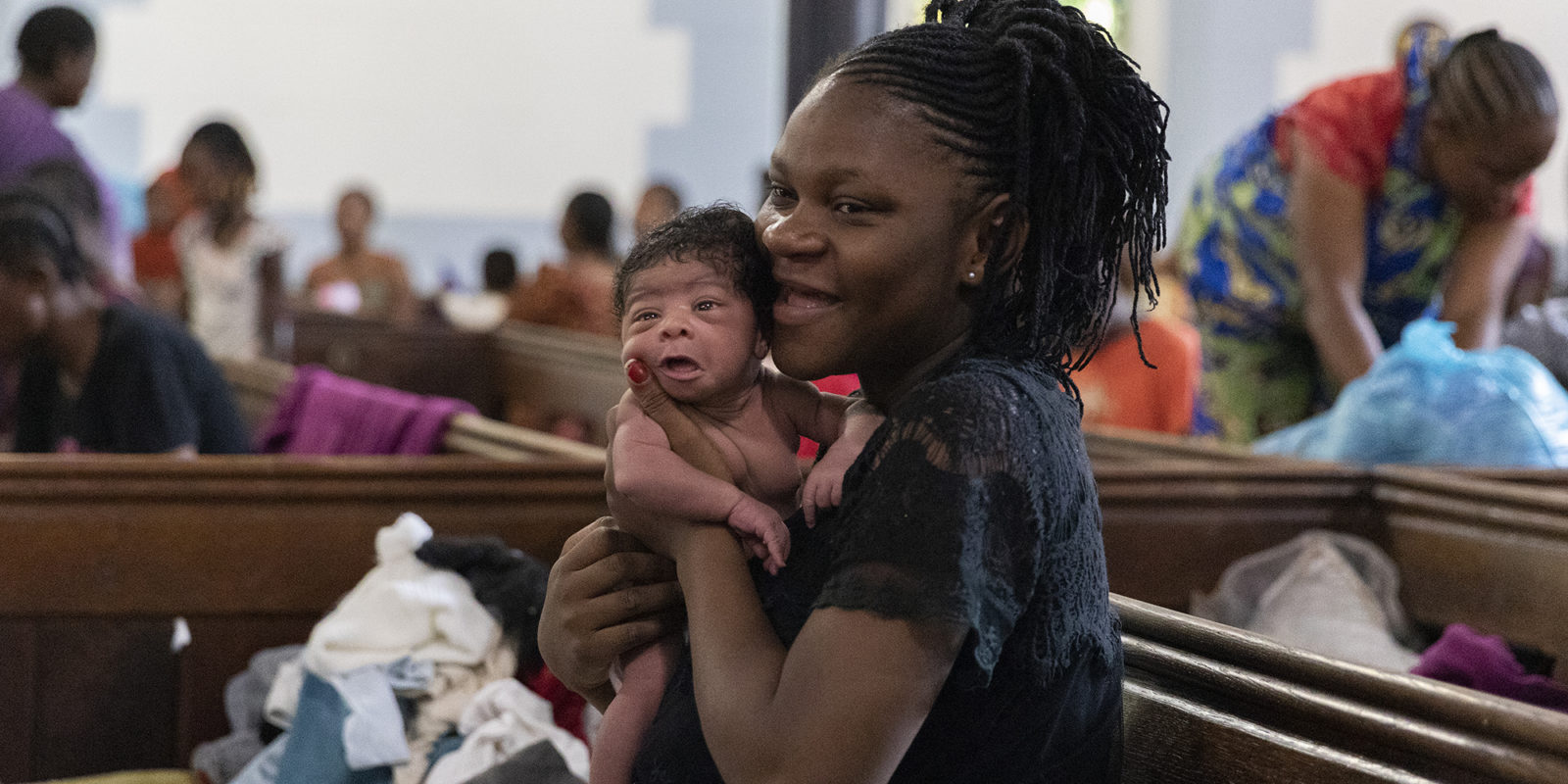 Undocumented children in South Africa fall into a perpetual cycle of statelessness due to the challenges of applying for identification documents. (Photo: EPA-EFE/NIC BOTHMA)

The Bill of Rights states that every child has the right to a name and a nationality from birth and that the child’s best interests are of paramount importance in every matter concerning the child. Without a birth certificate, children become invisible.

“I was nobody and I belonged nowhere.” Lebo Maphoditsa is a 40-year-old mother of four who is still not recognised as a South African citizen because she was not registered at birth. Unfortunately, Lebo is not the only one and her statelessness has meant she cannot register her own children at birth. Unicef estimates 3.7 million children are orphaned in South Africa and, according to the Department of Social Development, more than 2,000 children are abandoned yearly.

The United Nations High Commissioner for Refugees (UNHCR) defines statelessness as “individuals who are not considered citizens or nationals under the operation of the laws of any country”. Stateless children are unable to access primary education, write matric examinations or have a future in adulthood without identification. Many children who are either abandoned or whose parents are asylum seekers become stateless when administrative duties are neglected, or under the law they are unable to register for citizenship.

The Bill of Rights states that every child has the right to a name and a nationality from birth and that the child’s best interests are of paramount importance in every matter concerning the child. Registration of birth in South Africa begins with the act of giving notice of the child’s birth, which then leads to the issuing of a birth certificate. Without a birth certificate, children become invisible. According to the Birth and Deaths Registrations Act (BDRA) and the Child Care Act, any child born abandoned or orphaned at birth should be given a notice of birth by the authorised social worker. If the birth happens to be over a weekend or the parents are immigrants, in many cases, social workers fail to register births for these children.

Until recently, unmarried fathers could not register the birth of their child according to the BDRA but this was finally overturned in the high court because of an unmarried couple whose request to register their children was denied by Home Affairs. Although the BDRA gives provision for the birth of an abandoned child, the legal framework in the Citizenship’s Act asserts that citizenship can only be given in those circumstances if the child is given notice of birth in accordance with the BDRA. If a child is born at a provincial hospital, it’s the duty of the parent, social worker or legal guardian in the maternity ward to register the birth and notify Home Affairs.

So, if the social worker or authorised officer on duty does not register an abandoned child at birth, it’s unlikely they will be granted citizenship by Home Affairs. The BDRA does not specify a time frame for giving notice of birth for an abandoned child but requires a normal birth be given notice within seven days.

Môrester Child and Youth Centre was established by Helen Lotz in 2008 to provide a safe home to abandoned and abused children in Rustenburg, North West. Since then, the orphanage has been home to nearly 100 children who range between newborn and 18 years old. There are 70 children living at Môrester and nearly 50% (34 children) have yet to be issued identification documents by Home Affairs.

The difficulties lie in the children not having a notice of birth; therefore, they do not have birth certificates, the most essential aspect for acquiring citizenship. Many of the children who are brought to Môrester have been abandoned at birth, either in the hospital or on the street without adequate documentation. The social worker is required to do an age estimation if the child is found on the street in order to apply for notice of birth. If the mother of a child leaves the hospital without the child and without having registered his/her birth, the responsibility then falls on the hospital to issue notice of birth to the assigned social worker who must then go to Home Affairs and apply for a birth certificate.

Sounds simple enough. Well, when you’re at the mercy of the North West provincial government, it’s not always that simple. Madala Thepa in Daily Maverick writes a harrowing tale of medical malpractice within the maternity ward and beyond in Mafikeng hospital in North West. The facility has failed to adopt an electronic filing system and when patients needed to make medical claims, the hospital was unable to locate their files. An investigation into the financial situation of the North West Department of Health indicates not one clean audit since 2014 and R1.2-billion irregular expenditure for 2018/19. This sets the scene for the kind of environment social workers find themselves in in the North West and it’s not one that would be conducive for well-managed birth or death registration.

If a child is not registered at a hospital or is found on the street without documentation, it remains the responsibility of the social worker to get an age estimate of the child and attempt to trace their parents. If the child is suspected to be born from refugee parents, who themselves have poor documentation, it becomes even more difficult to register the child’s birth.

One recurring issue that Helen Lotz mentions is the lack of cooperation between the Departments of Social Development and Home Affairs. In 2004, a meeting between the two departments was held to attempt to solve the issue of implementing the Children’s Act across the divisions. Viable suggestions were put forward to make the interaction between the departments’ services more accessible, but I was unable to find any proof of its implementation. Social workers must queue for hours to submit late birth registrations because they are unable to submit documents in any other way. These procedures make it difficult for social workers to stay motivated and uphold their responsibilities for the children they oversee.

What should be done about it?

The lack of statistics on statelessness in South Africa is the first point of departure. Government and civil society must be able to paint an accurate picture of how big the stateless child issue is for them to react and deal with the problem effectively. For example, children born in South Africa from Somalian parents may be issued a notice of birth, but the parents will be expected to approach their embassy to register the child as Somalian. In most cases these refugees won’t approach their embassy for fear of persecution or possibly expulsion by South Africa. Gaining citizenship in South Africa compared with Somalia can mean a world of difference in terms of social welfare, which some would argue justifies the withholding of citizenship to stateless individuals.

Despite successful interventions by Lawyers for Human Rights and the UNHCR in upholding Children’s Rights (section 28 of the Bill of Rights) in court, it’s not enough to prevent the risk of statelessness in the country.

The Departments of Social Development and Home Affairs need to develop a memorandum of understanding and policy plan on the issue of stateless children in South Africa. Provisions should be made for social workers who oversee orphaned, abandoned or abused children to access the services of Home Affairs more efficiently. A direct link between the two departments should be made to ensure both departments have a clear goal when it comes to processing applications of this nature.

The various laws already in place to protect statelessness should mean the country is well equipped to respond to the UNHCR call for ending statelessness by 2024. An amendment bill for the Children’s Act was submitted to Parliament in August this year and does hope to extend the jurisdiction of the Children’s Court more accessible to abandoned or orphaned children.

But the courts cannot be the only solution towards solving the issue of statelessness among children in South Africa. Lawyers for Human Rights have called for the removal of requirements such as (1) “only South African citizens should witness the birth of a child born outside of a healthcare facility or at home”; and (2) “DNA test requirement for children born to unmarried parents or to foreign parent(s) with no option of a waiver or subsidy for those who cannot afford the costs of DNA tests”.

The requirements make the legal pathway to citizenship for stateless children a difficult one – and risks them being subject to a generational cycle of poverty. DM