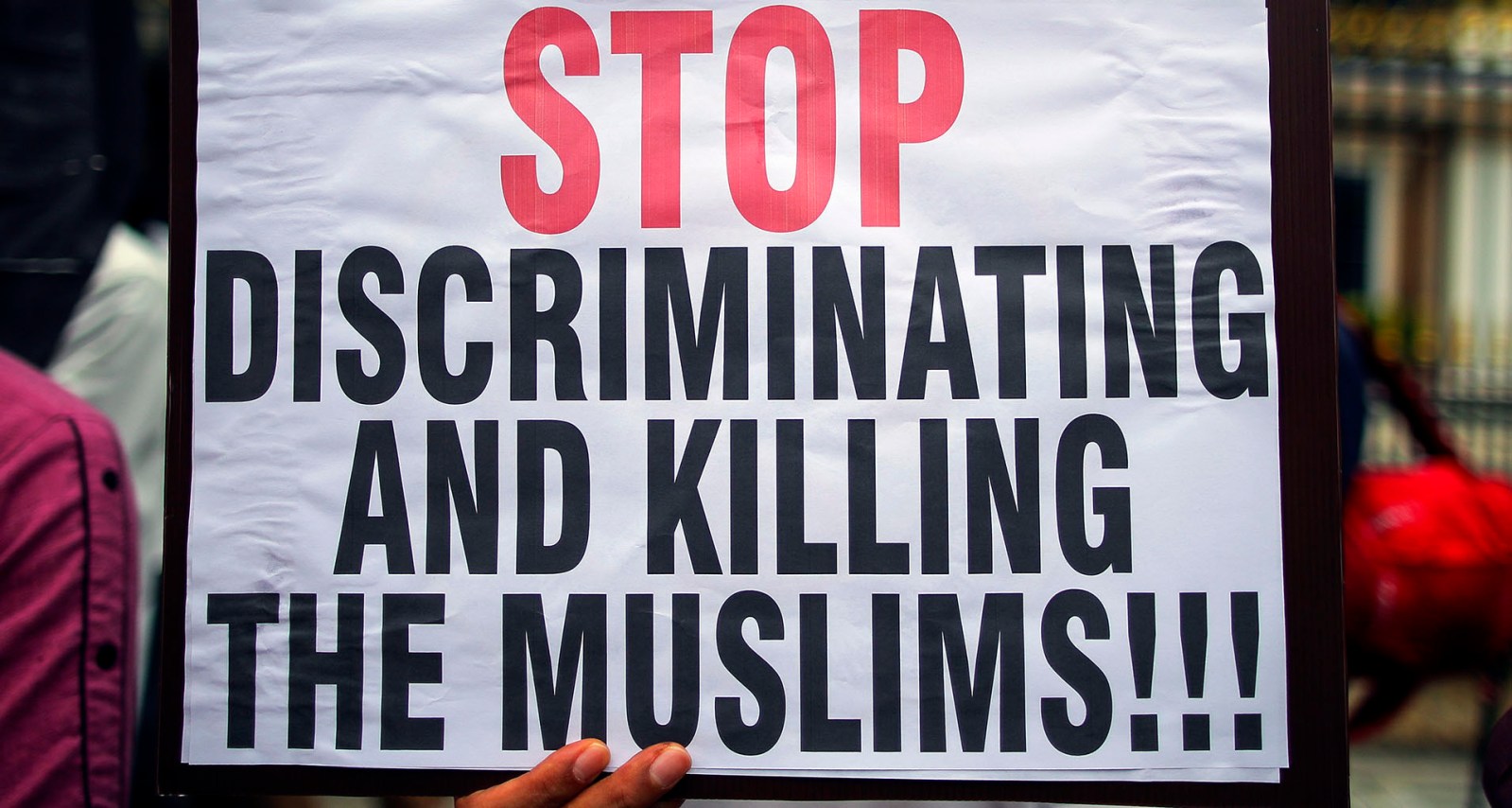 Demonstrators hold placards during a protest to stop the violence against the Muslim community in India, outside the India High Commission in Kuala Lumpur, Malaysia. (Photo: EPA-EFE/FAZRY ISMAIL)

The promise of remaking the world after colonial rule was filled with utopias, but also with violence. Despite our different histories, South Africa and India must make similar choices if dreams of equality and participatory democracy are to survive.

Almost a year ago, the Indian Parliament passed the discriminatory Citizenship Amendment Act (CAA). Massive public protests and state repression followed. The Bharatiya Janata Party’s (BJP) exclusionary policies and its supremacist ideology remind us that the choice between a better world or a violent world remains.

Leaders of anti-colonial struggles in countries like India, Algeria, Mozambique, Tanzania, Vietnam, Ghana and South Africa – the list is long – were not given their freedom on a silver platter. Freedom had to be fought for. But it became clear very quickly that there was no straightforward answer to the question of what freedom would mean.

Colonialism identified certain groups of people as incapable of running their own lives. Freedom came to mean taking charge of one’s destiny and of making decisions about how to organise a society. But at that moment of the “tryst with destiny”, as Nehru  famously put it, the question arose, what would that destiny be, and who would be part of the people?

These were not easy questions to answer.

Newly independent countries arrived into a world divided between big powers, the East and the West, and were immediately pressured into having to decide in whose great shadow they would take cover, the Euro-American bloc or the Soviet bloc.

Neither, some boldly decided.

Ghana’s Kwame Nkrumah, Nehru and others came together at the Bandung Afro-Asian Conference in Indonesia in 1955, and decided neither East nor West. They wanted their people to decide their own direction for freedom and development.

The second difficulty arose when having to answer the question: who were “the people”?

The racial and language divisions were pure colonial constructs; they came with a colonial way of seeing the world as made up of different races, with some inherently biologically superior and others inferior.

When it came to language, colonists imposed their languages on groups of people, whether it be English, French or Portuguese. It was not just that these languages were about communication. They too were given hierarchies and seen as measures of civilisation and culture. Cameroon is a living testimony to this legacy, with violence dividing Francophones and Anglophones.

When it came to religious and ethnic identity they found existing differences. Europeans did not introduce either of the major Abrahmic faiths, such as Christianity or Islam in Africa, for example. These were there for thousands of years before Europeans arrived, as Ethiopian history reminds us. But what colonial rulers did do was to take these different ethnic and religious identities and turn them into identities with political consequences. Divide and rule meant giving some more access to political power and resources than others.

When the moment of independence came, anti-colonial leaders and movements inherited these colonially reinforced hierarchies and divisions. Freedom immediately meant making two major decisions. The first was to choose in which sphere of influence in the Cold War you would locate yourself, which meant deciding who your friends and enemies were going to be. And second, freedom meant crafting a new political community out of the divisions inherited from colonial rule.

Newly independent countries answered this in many different ways.

Some societies took the hierarchies of the past and understood freedom and justice to mean turning the picture upside down; “the last shall be first, and the first shall be last”. The 1959 Hutu social revolution in Rwanda is an example.

For others, it was about transcending the divisions of the past and creating something new. The state-building project of Tanzania’s Julius Nyerere comes to mind. Nyerere argued vociferously for a kind of freedom that would create new identities rather than entrench old ones. When South Africa’s political settlement in 1994 defined citizenship in terms of where you were at, rather than where you came from, it continued Nyerere’s example.

We know that the violent partition of India based on religious divisions accompanied its independence. That catastrophic split led Gandhi to turn his back on the Independence Day celebrations in 1947. When freedom became the right to decide on who is an Indian, the answer was to be defined by the colonial inheritance that had used religious identity to divide colonised peoples. And Pakistan was born, a freedom and a state for a people now made foreign in the land of their birth.

But, it must be said, many in the leadership of the Indian National Congress movement and others across the country continued to try to create a vision of India that could still hold on to the idea of India as a place of diversity, as a place of freedom for all those who lived in its geographical space. This ambition was contained in the 1950 Indian Constitution and in the way secularism has been defined there.

But it is also clear that those who embraced a colonial version of who would be Indian were going to spend decades planning and strategising to achieve their narrow version of India politically. The passing of the Citizenship Amendment Act in 2019 India is a step closer for them to make those identified as Muslim second-class citizens and, in effect, foreigners.

These events in India are important not only for Indians, but for all us, and not simply because they affect human rights. They matter because they go to the heart of what all of us who inherit colonial histories have a political responsibility to reckon with:

What should freedom mean? What should be the destinies of the societies we want to create? Do we want to reproduce the past or do we want freedom to be the promise of a world in which new generations can grow up with a relationship to those who are different that is not based on stereotypes of hierarchy, or inferiority or superiority?

When India decides it is acceptable to make minorities vulnerable politically, and officially and unofficially sanctions erasing the histories of minority peoples, making them outcasts, then this concerns all colonised peoples who have a stake in deciding what freedom should mean in the world.

South Africans have offered an important example to the world of what political freedom can mean after colonial rule in the best possible way. But it is an example that the policy in India under BJP rule punches in the gut. The drift of India towards majoritarian domination flies in the face of the famous statement Nelson Mandela made from the dock, in which he declared that he was “prepared to die, if needs be, for the creation of a new society in which a colonial minority would not dominate”. But he would do the same, he said, for the creation of a society in which the colonised majority does not monopolise freedom.

The CAA is a law that legalises majority domination in India, a vision diametrically opposed to the anti-colonial ideals of freedom that Mandela and Nyerere stand for.

The major crossroad we find ourselves at globally is split between two visions of freedom divided on how we define the relationship between residency and rights.

The one vision of freedom wants only certain groups of people to belong to our political community – whether it be those who are said to share the same religion or the same ethnicity. This vision accepts the story of colonial history, about who belongs to the nation, and makes shared origins the basis of political rights. The CAA, in effect, is trying to take away the political and social rights of those who are resident, on the basis of religious identity. Its message to Indian Muslims is that you can be resident, but your rights will be under constant threat; you have been deemed as outsiders by a majoritarian government and ideology and your citizenship has become a matter of dispute – because you are a Muslim.

The other vision of freedom means we continue to strive towards creating political communities in which we recognise the past but are not straightjacketed by it, where it is common residency, not common origins, that gives us political rights. Where people can be different but also equal. If colonial rule told us we were different and unequal, then surely overcoming colonialism’s long shadow over our futures means committing ourselves politically to being critical of political developments – wherever they may be – that continue to sow division among previously colonised peoples. DM/MC

Suren Pillay is an Associate Professor at the Centre for Humanities Research, University of the Western Cape.