A violent juncture: The rise of fascism in India 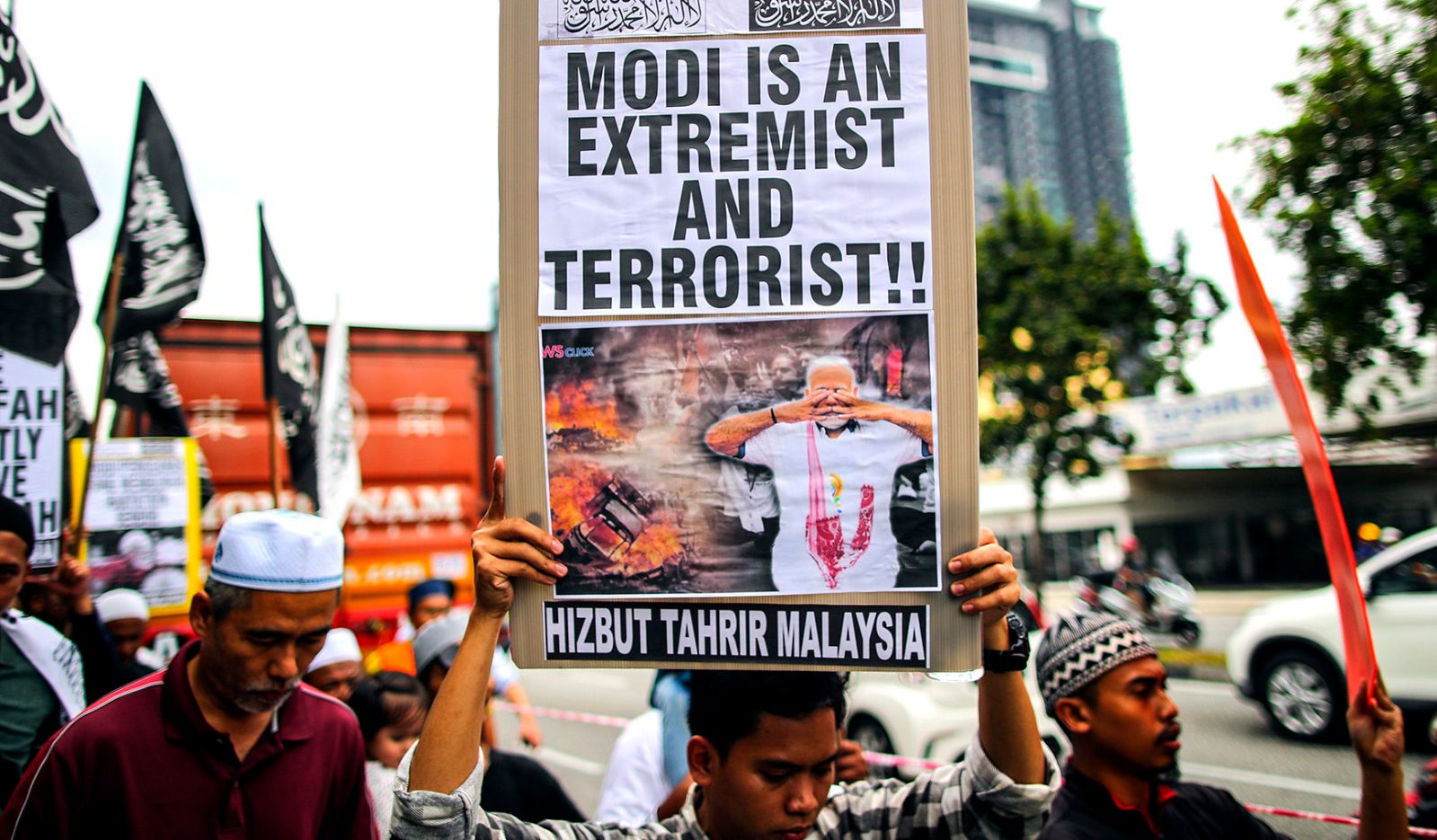 Demonstrators hold placards outside the India High Commission in Kuala Lumpur, Malaysia in March 2020 during a protest over violence against the Muslim community in India. (Photo: EPA-EFE / Fazry Ismail)

South Africans are all too familiar with the experience of supremacist ideologies, discriminatory laws and repression of dissent. International solidarity played a crucial role in South Africa’s own struggle against the apartheid regime. Furthermore, South Africa is home to 1.3 million people of Indian descent who are also experiencing the onslaught of right-wing mobilisation that positions them against one another on religious grounds.

This article initiates a new series in Maverick Citizen that will contextualise the rise of fascist forces in India. Upcoming essays on religious nationalism, majoritarian violence and state repression in the world’s largest electoral democracy will also highlight how related issues can affect the South African social and political landscape. The series will, moreover, contribute towards a global solidarity campaign to fight political persecution and social marginalisation in India.

Next year — in 2021 — the Indian republic and constitution will turn 70. One of the first colonised nations to achieve liberation, the Indian constitution enacted in 1951 hails the country as a sovereign, socialist, secular, democratic republic. It commits the Indian state and its people to justice (social, economic and political); liberty of thought, expression, faith, belief and worship; equality of status and opportunity; and fraternity assuring the dignity of individuals and the unity and integrity of the nation. That vision and Indian democracy, however, are facing a grave crisis. This crisis afflicts the bodily health and well-being of its people, their political liberties, cultural and religious freedoms and dignity.

India is a country of 365.5 million poor people who have limited access to health, nutrition, sanitation and education. It has recently crossed the five-million mark of Covid-19 infections and (according to the latest statistics, see here) has recorded 102,685 deaths. The first few months of pandemic-related lockdown, which began in March, saw thousands of working-class Indian migrants walking hundreds of miles with their families and scant belongings, ravaged by hunger and thirst, but still seeking to find their way to rural homes.

A few months before the lockdown, the Indian parliament passed the discriminatory Citizenship Amendment Act (CAA) that associates Indian citizenship with religious identity, attacking the basic tenets of egalitarianism enshrined in the constitution. The legislation, in conjunction with the soon to be implemented National Population Register (NPR), to be followed by the National Registry of Citizens (NRC), will enable the persecution of religious and social minorities, producing a domino effect of statelessness and disintegration of fundamental human rights.

International bodies such as the United Nations High Commissioner for Human Rights based in Geneva, 626 out of 750 members of the European Parliament, Amnesty International and the International Commission of Jurists, among others, have expressed strong reservations against the CAA and condemned its divisive and exclusionary character.

The NPR, through its stringent documentation requirements, will be especially detrimental for members of socio-economically disadvantaged groups, inhibiting them from validating their citizenship. Together, the CAA-NPR and NRC threaten to dispossess people from oppressed castes, the urban and rural poor, the LGBTQIA+ community and religious minorities of India from their cultural, economic and human rights.

While designed to fast-track citizenship for non-Muslim refugees from neighbouring countries, the CAA particularly threatens the lives and livelihood of India’s 200 million Muslims, deemed by the ruling party and its extreme right-wing affiliates as bearers of foreign ancestry and Hindu India’s civilisational enemies.

Here it is important to note that Islam has been part of the subcontinent’s life since the 7th century. Sections of the Muslim population in pre-colonial India were part of the economic and political elites. But in current post-colonial times, Indian Muslims make up the country’s “new underclass” — marginal in multiple respects and comparable to Dalits in land ownership, employment, housing, education and experiencing discrimination in employment and political representation.

The latter half of 2019 and the first few months of 2020 saw mass demonstrations against the CAA-NPR and NRC throughout India.

Muslim women and young people were at the forefront of this collective upsurge to reclaim citizenship and uphold the values of the Indian constitution. Solidarity marches were held across the world, including South Africa. Indian cities saw peaceful sit-ins in which thousands of people participated from all walks of life — students, poets, artists and especially working-class women. In various parts of India, especially the North Indian state of Uttar Pradesh, protesters received a brutal backlash from law enforcement and hundreds remained in detention.

While the government refused to enter into meaningful dialogue with the protesters, the ruling party and its members and state-sponsored media outlets propagated a counter-narrative deeming the protesters as “anti-nationals” and “traitors” who deserve to be eliminated. Anti-CAA protesters, particularly those from the Muslim minority community, thus became a target of the ruling party’s right-wing Hindu supremacist supporters — their hate speech and their violence (see here and here).

The number of anti-CAA protesters arrested is above 700 and rising (see here, here, here and here).

In the State-led effort to criminalise civil rights activism and freedom of speech, police have recently sought to implicate senior political and civil society activists in cases of violence and murder and arrested students and youth activists under extraordinary laws that suspend due process. More arrests are anticipated of critics of the new citizenship law, the ruling party and its exclusionary ideology of religious nationalism.

Among those that the police are trying to drag into their net are the Communist Party of India (Marxist) president Sitaram Yechury, the economist Jayati Ghosh, the Swaraj party’s president Yogendra Yadav, as well as other academics, artists and public intellectuals who have questioned the state and its policies.

In May 2020, Frontline Defenders, the prominent international human rights protection group, noted that:

“Treatment of student human rights defenders and supporters and organizers of the anti-CAA protests is a direct reprisal for their peaceful human rights work and exercise of the right to free expression. Their arrests represent an attempt to silence dissent, in particular from minority Muslim voices, and take advantage of Covid-19 restrictions to circumvent protests against their arrests and ultimately further a dangerous and regressive State agenda.”

Narendra Modi and the BJP

While the Indian state turns increasingly supremacist and authoritarian, the Indian prime minister Narendra Modi, the ruling Bharatiya Janata Party (BJP) and its parent body the Rashtriya Swayamsevak Sangh (RSS), enjoy unprecedented popularity among the Hindu majority population. In 2019, that popularity translated into landslide electoral victory for the BJP.

This popularity is enabled by an organisational network which has penetrated deep into Indian society and carries out mobilisation and propaganda activities in villages, neighbourhoods and towns across the country. It is also sustained and heightened by a partisan media and its decidedly Islamophobic and anti-left discourse.

Millions of Indian citizens remain under the spell of that majoritarian and polarising discourse. Yet thousands of others have paid a grave price for it. In 2002, nearly 2,000 Muslims died in a pogrom in Gujarat under (then Chief Minister) Modi’s watch. Since 2014, when he became the Prime Minister, hate crimes, particularly the lynching of working-class Muslim men, have seen a sharp increase. Fifty-three people died in Delhi in February 2020 and more than 200 were injured in violence that was particularly directed at families from poor, marginal communities. Journalists and commentators concerned about the enmity and violence-ridden milieu unfolding under the aegis of a charismatic leader, have made credible comparisons with Mussolini’s Italy and Rwanda of the pre-genocide years.

Contemporary India might not reproduce all the features of classical German or Italian fascism. It is, however, reckoning with many ingredients that have produced grave violence in the past and may continue to do so in the future: the rise of a supremacist, divisive ideology whose spell is cast through major media outlets and an intricate web of grassroots organisations; easily compromised institutions of liberal democracy ready to fall in line with the plans of the majoritarian party; and a large section of the population that is not only ready to acquiesce to an ethno religious politics of enmity directed against minorities and marginal groups, but also willing look away when dissent is violently repressed.

This article is written with the hope that South Africans and others reading it do not similarly look away and concede to the growth of fascism in the second-most populous country of the world. Instead, we hope that they search for and find their own modes of extending solidarity to campaigns in India and across the world (here and here) who are seeking to fight it. DM/MC

Because of legitimate fears of repercussions, the two authors of this article, whose names are known to Maverick Citizen, have asked to remain anonymous. Both are members of People Against Apartheid & Fascism which was formed in 2019 to advocate for human rights in South Africa and beyond. It advocates for global solidarity against discriminatory ideologies, repressive regimes and laws that have resurfaced across the world in the past few years.