Now, in apparent defiance of the JSC, the president and the Office of the Chief Justice, Western Cape Judge President John Hlophe has allowed Parker to continue to serve in the division.

On 14 October, the Judicial Service Commission (JSC) announced that it had advised President Cyril Ramaphosa to suspend Western Cape Judge Mushtak Parker pending the findings of a Judicial Conduct Tribunal into gross misconduct. Parker’s suspension was on condition that he finalised part-heard and reserved judgments, and it was to endure until the complaints were finalised by the tribunal. He was to be allocated no new matters while on suspension.

Now, in apparent defiance of the JSC, the president and the Office of the Chief Justice, Western Cape Judge President John Hlophe has allowed Parker to continue to serve in the division.

As late as Friday 20 November, Parker was allocated by Hlophe the criminal pretrial conference roll, an action that legal experts say will open any and all of Parker’s decisions to legal challenge as they would be “incompetent in law”. 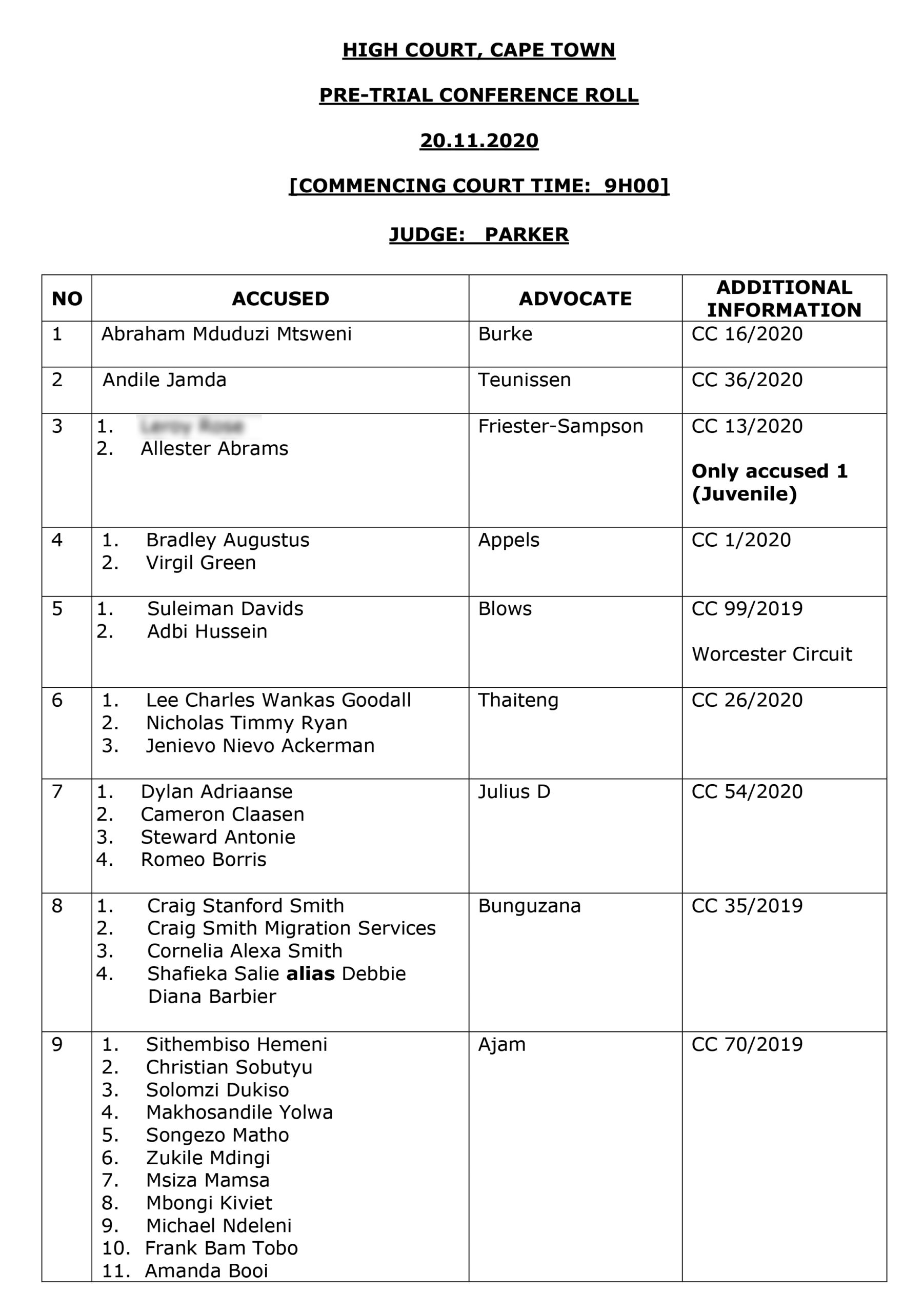 Nicole Fritz, of Freedom Under Law, said that the NGO had confirmed that Parker had been informed of his suspension.

JSC spokesperson CP Fourie, responding to a question from Daily Maverick, directed our queries to Hlophe himself or judiciary spokesperson Nathi Mncube.

Mncube in turn spun a Trumpian justification for Parker being at work on Friday, offering that “the court rolls are prepared at the beginning of term. That would have been long before the suspension was an issue.”

Mncube suggested we rather “check if he has heard any new matter since his suspension”.

We did forward evidence to Mncube of the 20 November court roll, which clearly shows Parker presided over the criminal pretrial conference roll. These are all new matters.

Parker is the only person standing between Hlophe facing a tribunal, a decision by Chief Justice Mogoeng Mogoeng which Hlophe has appealed.

Parker has been accused by 10 colleagues in the division of providing conflicting versions of an alleged assault on him by Hlophe, in 2019.

This rendering of conflicting versions may have made Parker guilty “of gross misconduct” and the tribunal will deliberate on all the evidence.

Hlophe maintains the assault never took place and that Deputy Judge President Patricia Goliath, colluding with the chief justice, had manufactured the complaint.

He also accused Goliath and Mogoeng of trying to induce Parker to make a false statement against him.

These are deeply serious and worrying charges and an action from the chief justice and the JSC is long overdue in the case of Hlophe and Parker.

How does one explain the lack of concern or urgency with regard to both Hlophe and Parker’s contempt for the law?

Parker faces a further inquiry related to the Western Cape Bar Council complaint to the JSC that Parker had not disclosed, when he was interviewed for the Bench, that a law firm which he had helped establish had an R8-million deficit in its trust account.

This matter, the JSC said, was “extremely serious” and if proven “would constitute gross misconduct on his [Parker’s] part”.

The Constitution allows for the suspension of a judge by the president on the advice of the JSC when that judge is the subject of an impeachment procedure.

Hlophe’s apparent ignoring of the JSC and the suspension of Parker by the president, mimics the behaviour of former president Jacob Zuma and his public display of contempt for the law and the Commission of Inquiry into State Capture.

In that instance, Zuma absconded without permission and will now face a criminal charge as well as a Constitutional Court application to compel him to appear before the commission.

Zondo gets hardcore on Zuma, throws every legal lasso, including urgent approach to Constitutional Court

Hlophe has been on a fightback campaign, giving exclusive press interviews where he has accused the chief justice of South Africa as well as the deputy judge president of the Western Cape of perjury.

It is hard to think of a more grave set of circumstances that undermine the South African judiciary at a time when it will be called upon to act with independence and impartiality in the litany of cases that are about to face trial.

Is Hlophe above the law and untouchable, just like Zuma?

It certainly appears so, as a paralysed JSC has delayed for more than a decade dealing with myriad serious complaints against him. DM