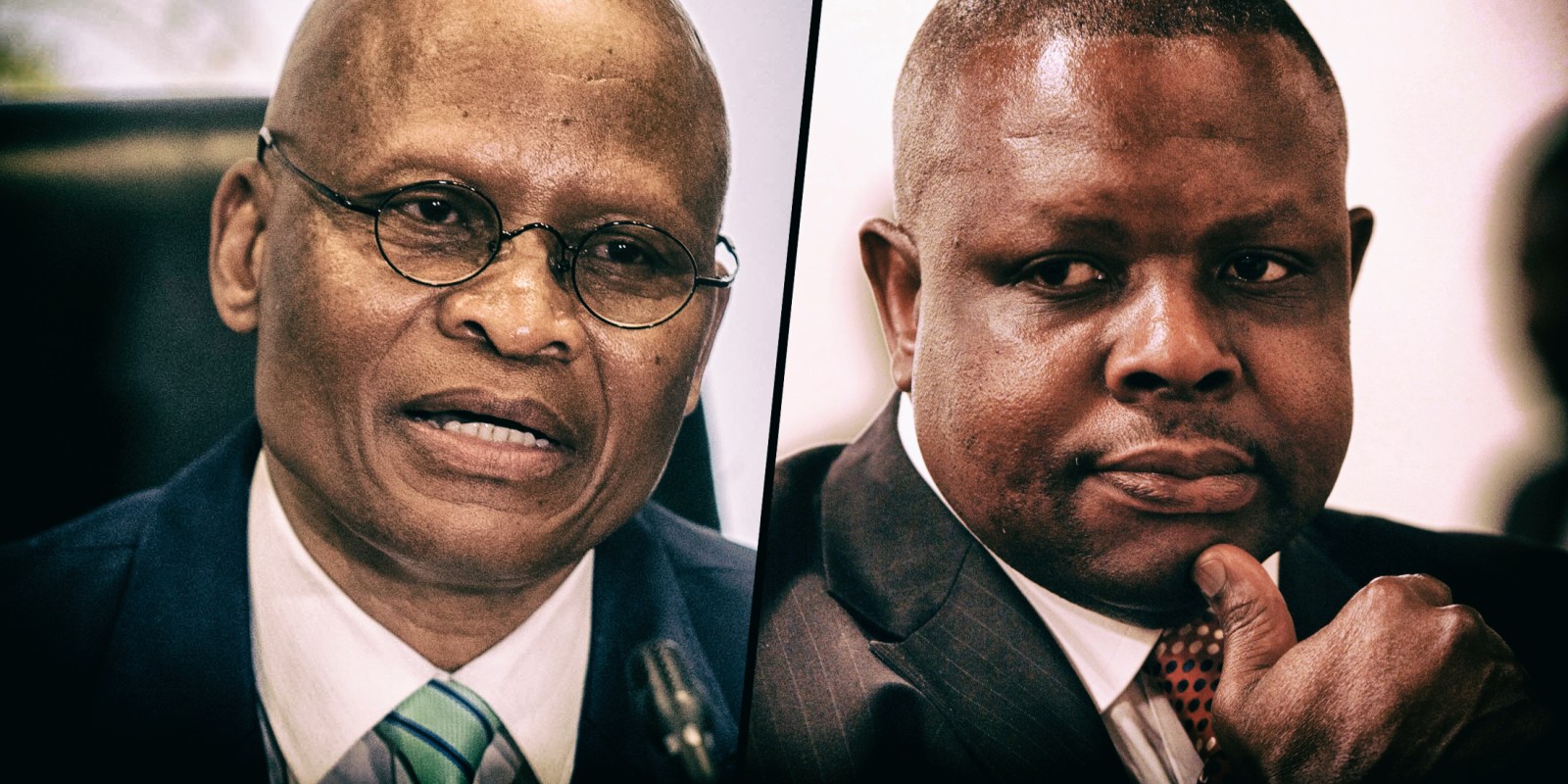 Judge John Hlophe appealed Chief Justice Mogoeng Mogoeng’s ruling that he face misconduct charges, maintaining that this is all part of a horrible conspiracy. He has also defied President Cyril Ramaphosa in the matter of Judge Mushtak Parker’s suspension.

Appealing a 3 July 2020 decision handed down by Chief Justice Mogoeng Mogoeng, Hlophe, in an affidavit dated 3 August 2020, set out a cumulative stack of cards, which he hopes will justify his plea for an appeal.

He accused Mogoeng of being blinded by his Christian faith, of being anti-Muslim, of embarking on an irregular decision-making process in considering Deputy Judge President Patricia Goliath’s complaint, that the Chief Justice was not authorised to adjudicate the complaint in the first place, that he had conspired with Goliath with regard to an alleged assault by Hlophe of Judge Mushtak Parker, that the Chief Justice was guilty of subversion, and finally, that “others” had attempted to persuade Judge Parker to lodge a “false” claim against Hlophe.

For this, the country’s Chief Justice should face impeachment, according to the Judge President.

Hlophe is also peeved that the Chief Justice ignored dealing with his question as to who would cover his considerable legal fees in the prolonged matter, and for dismissing a counter-complaint he had lodged against Goliath.

The fact that 10 judges in the division have subsequently sworn to affidavits about the alleged assault on Parker by Hlophe, in Parker’s chambers in February 2019, does not seem to have any weight, according to Hlophe.

As far as Hlophe is concerned this is all part of a big, fat, horrible, racist conspiracy.

Daily Maverick has reliably learned that while Parker has since been suspended by President Cyril Ramaphosa – in line with the Judicial Service Commission’s (JSC’s) recommendation, pending the findings of a Judicial Conduct Tribunal into gross misconduct – he is still being allocated work by Hlophe.

Parker was ordered by the JSC to complete all outstanding judgments prior to his suspension, but on Friday 20 November, in defiance of the president’s order, Hlophe allocated a pretrial criminal matter in the Western Cape High Court to Parker.

Parker is key to Hlophe’s success at countering the complaints against him.

Parker faces a further gross misconduct complaint relating to an R8-million hole in the trust fund of the legal firm he established, a no-small-matter fact he failed to disclose to the JSC when he applied to become a judge.

Hlophe was moved to appeal Mogoeng’s ruling after Daily Maverick published in May 2o20 that Goliath, in an affidavit to the JSC, had revealed that she had had a personal audience with Mogoeng in October 2019.

This Goliath said she had done “as required by the Judicial Code of Conduct” and because she had every right to report Hlophe’s alleged aggressive behaviour to the JSC.

She had followed the correct procedures in doing so, she maintained. Two judges, she said, had also informed her about the alleged assault.

At that meeting, Goliath had played a recording for Mogoeng of Hlophe calling her a “piece of shit”.

In March 2020, Deputy Chief Justice Raymond Zondo, who chairs the Judicial Conduct Committee (JCC), designated SCA Judge Nambitha Dambuza (who is also a member of the JCC) to conduct an inquiry into Goliath’s complaint. The filing of Goliath’s responding affidavit was part of the ongoing inquiry.

However, says Hlophe, Mogoeng’s meeting with Goliath prior to the lodging of the complaint disqualified him from adjudicating it.

“I would have no problem with a lawful and competent referral to the Judicial Conduct Tribunal,” said Hlophe, adding that Mogoeng had also “failed to have regard to the papers before him in deciding to dismiss my complaint”.

Mogoeng was not the chairperson authorised to deal with the complaints and it was in fact Deputy Chief Justice Zondo who had made the “first and initiating decision on the respective complaints”.

Zondo should have remained the chairperson and not Mogoeng, who had stated that he had become involved, “given that all Committee Members were disqualified from adjudicating the complaints”.

“It would appear that the Chief Justice recognises that it is an extraordinary intervention for him to replace the Deputy Chief Justice as chairperson of the JCC in regard to these complaints,” charged Hlophe.

Mogoeng, he added, had given no “factual or legal basis for this intervention and his authority to determine the respective complaints”.

The Chief Justice’s intervention on the “Rule of Necessity” was unlawful, said Hlophe, and therefore his ruling should be “set aside in its entirety”.

I advised the judge president that these allegations were false. The Judge President lost his temper and struck me with his fist on my chest, after repeatedly threatening to ‘fuck me up’.

Hlophe said Mogoeng, in his response to a complaint lodged with the JSC by Hlophe, had demonstrated that “his world-view is shaped by his interpretation of the Bible”.

“The Chief Justice is in fact, so absolved in his own interpretation of the Bible that he is unable to rise above it.”

It was this “deep-seated belief in his faith as a Christian” that had impaired Mogoeng’s capacity to respond to charges against Hlophe and his wife, Judge Gayaat Salie-Hlophe, who are both Muslim.

Hlophe said that on the day that Mogoeng had made the ruling, Parker had approached and “casually informed me something startling about the private meeting between Goliath Deputy Judge President and Mogoeng Chief Justice”.

“An affidavit will be sought from him confirming what I am about to disclose,” Hlophe promised.

He said that Parker had informed him that when Goliath had returned from her meeting with Mogoeng, she [Goliath] had visited him in chambers.

“She then informed him that she had been to see the Chief Justice about the alleged assault. The Chief Justice had asked her (Goliath Deputy Judge President) to inform Parker Judge that he should file a complaint against me, which Parker should send to the chief justice’s private secretary, Mrs Slingers.”

Goliath had given Parker, maintained Hlophe, Slingers’ phone number. But Parker had informed Goliath “flatly that he was not going to lodge a complaint to the JSC against me as he had not been assaulted”.

Hlophe alleges that Goliath had seemed “disappointed” by this response, “hence her decision to submit the complaint of the alleged assault in her own name”.

If what Parker had since told him was true, said Hlophe, “I have no reason to doubt it, the conduct of Mogoeng Chief Justice and Goliath Deputy Judge President in relation to this matter lacks the attributes of integrity.”

Parker is, in the meantime, going to have to explain to a tribunal why he provided conflicting accounts of the alleged assault to fellow judges, and in fact, asked Judge Eduard Wille to take an affidavit with regard to the attack.

In an affidavit that Parker had requested Wille draw up as he was not “computer literate” and had not wanted his registrar “to bear any knowledge of the incident”, Parker set out events that took place in his chambers on 25 February 2019.

Parker stated under oath that he was alone when Hlophe had entered around noon and accused him of being racist and of wanting “to screw his wife” (Judge Gayaat Salie-Hlophe).

“I advised the judge president that these allegations were false. The Judge President lost his temper and struck me with his fist on my chest, after repeatedly threatening to ‘fuck me up’.”

Parker then said he had fallen to the ground “and in so doing broke the key that was in the cupboard housing some of my legal books”.

Hlophe, however, denies the assault took place and had accused the chief justice of hearing “a rumour from Goliath Deputy Judge President in that private meeting.”

Mogoeng, he said, had “actively engaged with her [Goliath] on the rumour by advising her to approach Judge Parker with the assurance of his support, if he were to file a complaint against me of the alleged assault”.

This would, Hlophe added, constitute a “deliberate subversion of the JSC process for resolving allegations of judicial misconduct by a Chief Justice”.

He accused the Chief Justice of deliberately creating the “dispute” and thereafter seeking “to invoke the necessity doctrine to avoid the consequences of his actions”.

Parker, said Hlophe, will, in good time, “in his own words report on that approach by the Goliath Deputy Judge President (sic) under oath”.

“If this information by Judge Parker is correct as I believe it is, then the Chief Justice conducted himself in a manner that does not accord with the law and the rules for resolving judicial misconduct complaints,” said Hlophe. DM