JZ 2.0? Ace Magashule’s use of Jacob Zuma’s victim script is likely to fail 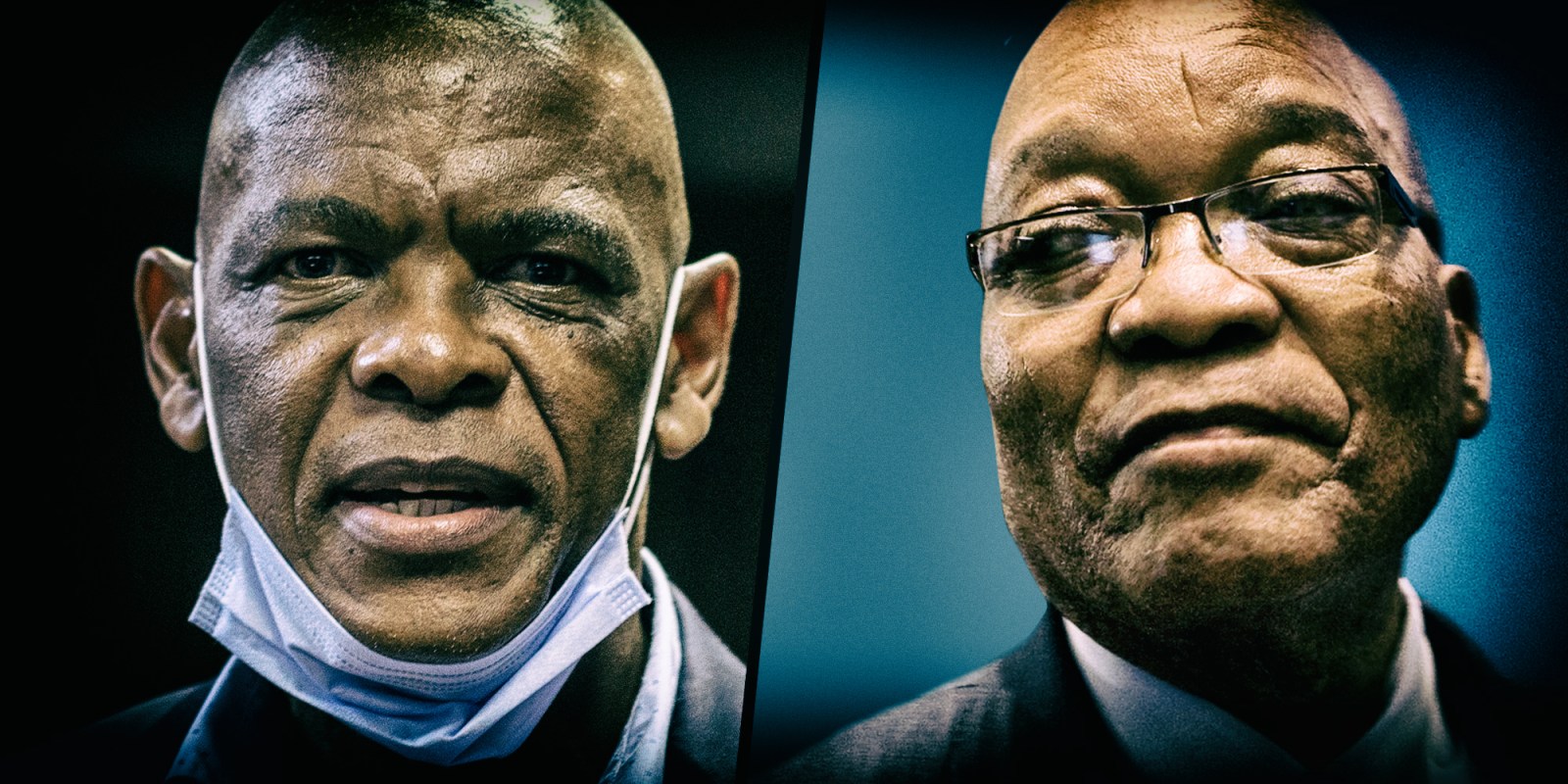 Just like the former president did, the ANC secretary-general has attacked ‘the media’, the prosecuting authorities and those behind a ‘conspiracy’. However, there are a number of important reasons this strategy seems doomed to failure.

The 2021 prosecution(s) of Ace Magashule will be SA’s highest-profile political trial(s) since the acquittal of Jacob Zuma on rape charges in 2006 and the conviction of Schabir Shaik in 2005. Magashule looks set to follow a similar path to Zuma’s many legal issues over the years. Some believe his political power may even increase through this process. And yet, there is a fundamental difference.

That difference: Magashule does not appear to have the control of the National Prosecuting Authority (NPA) that Zuma was able to exert in 2009 to prevent the case(s) against him even starting.

On Friday, Magahsule used his time outside the Magistrates’ Court in Mangaung to paint himself as the ultimate victim.

He claimed that he was being persecuted by the media, that the person who wrote “the book” about him did not write it himself but that it was written by other people. He claimed also that the fact the author (Daily Maverick Scorpio’s Pieter-Louis Myburgh) was only 27 showed this.

None of these allegations is true, of course. Myburgh is not 27, and there is no conspiracy against Magashule. If there was a conspiracy, Friday was as good a day as any to reveal the names of the people who supposedly wrote the book.

Magashule also claimed that “when the time is right” he would reveal who else had committed acts of corruption, that people who are guilty of wrongdoing are occupying high office.

Again, no proof, no evidence was offered. And, if you remember, Zuma threatened the same type of revenge, even while president of South Africa.

Yet, this claim is, of course, no defence: if you are stopped for speeding by a police officer, claiming other drivers were also speeding would not erase your guilt.

In fact, there is a legal and moral duty upon him to report people whom he knows committed corrupt acts.

On Friday, Magashule had possibly the biggest crowd and the biggest live TV and radio audience he will have during his trial. It was the perfect opportunity to explain why he was innocent and what actually happened. He did not do so, suggesting he has no alternative, and legal, version to offer.

All of this is what Zuma did.

From the start of the prosecution of his financial adviser, Shaik, in 2004, Zuma claimed he was the victim of a conspiracy. He never offered details or mentioned names and there was no evidence to back up his claim.

There was also no explanation for the money that he received from Shaik, no publicly available version of what it was for and why it flowed to him.

There was also a focus on the media, as if the media was somehow responsible for the NPA taking the decisions that it did.

It is important to note that there are plenty of other people who play important roles in our politics now who were backing Zuma’s actions and claims.

History shows that “the media” was right and that they were wrong.

In the end, Cosatu and the SACP both demanded that Zuma leave office, Vavi became one of his biggest critics, and the others were all a part of the ANC National Executive Committee meeting that decided in February 2018 that Zuma should leave the office of president.

None of them have offered an apology to “the media” for their attacks on journalists at the time.

However, this does not condemn South Africa to a repetition of those events, even though the resonances with that time are incredibly strong.

In the years leading up to the ANC’s Polokwane conference in December 2007 the “narrative” that was set around Zuma’s corruption charges had been created by the Shaik trial, and the reporting of the Mail & Guardian and others before that. The Constitutional Court confirmed that Shaik was guilty of paying bribes to Zuma. The battle was around charging Zuma for receiving those same bribes.

For Magashule, the “narrative” has been set by the Zondo Commission and the reporting of Myburgh.

And the response by Magashule has been the same as the response from Zuma: to attack “the media”, the prosecuting authorities and those behind a “conspiracy”.

The real lesson to be drawn from the Zuma experience is that the key moment is the start of the trial. Once witness testimony is heard in open court it is very difficult to stop the case from proceeding. And it only gets harder the longer it goes on, because more evidence is heard by the nation.

Zuma knew this. This is why he put so much pressure on Mokotedi Mpshe, who was the acting head of the NPA at the time, to drop the charges against him. In the end, Mpshe did so, just in time for the 2009 elections, clearing the space for South Africa to elect Zuma as president.

It was also why Zuma appointed Menzi Simelane as head of the NPA before the Constitutional Court ruled that appointment invalid (Simelane was found to have “prima facie” lied under oath during the Ginwala Inquiry).

It also explains the history of the NPA during that time – that it was all about preventing a trial from starting.

It is unlikely that Magashule has the same power. He does not have a united movement behind him (as Zuma did) and he is unlikely to be the next president of the ANC and the country.

To make it tougher, the person who does have the power to remove the head of the NPA, President Cyril Ramaphosa, is also the person with the most to gain from the prosecution proceeding. Which makes it unlikely that he will do anything to help Magashule (even if he could, which strictly legally speaking, he can’t).

It may also be important that in this case the victims of Magashule’s alleged corruption are not nameless and faceless. It is possible that the NPA will be able to produce evidence from the people who lost out due to the money that was stolen, there will be people who can explain on live TV what this did to their lives.

This could be crucial, because it would put a human face on what Magashule did. It would show the true human cost of the corruption.

This was much harder to do in the case of Shaik and Zuma.

If such evidence is heard it could easily start a process of Magashule’s political support slipping away and it will make it much harder to support him in public as his followers did on Friday.

In the years leading up to Polokwane, Zuma was challenging Thabo Mbeki for the position of leader of the ANC and ultimately president. And while Ramaphosa is seen as a credible leader, Mbeki found himself unable to speak in public on the major issue of the time: HIV/AIDS.

There is no real opportunity for a move against Ramaphosa until another conference in 2022. By then, Magashule may well have been convicted at the asbestos trial. And there are serious beliefs that his legal problems will not end with this single trial.

It should also not be forgotten just how important the ANC’s province of KwaZulu-Natal was to the events around Zuma. It had such political weight that it could ensure no one else assumed the ANC leadership. The Free State ANC is simply too small by comparison to attempt the same thing.

There is one other fundamental difference between the position of Zuma 14 years ago and Magashule in 2020.

When Zuma was making his claims, our nation had not gone through his period of misrule, we had not lived through “nine wasted years”. In 2020, we have no such blind spots. Citizens and voters are wise to the arguments Magashule is presenting. The ANC is much weaker now than it was then. It may not survive any attempt by Magashule to use the Zuma strategy in the same ways

It is possible that the next few months will see a period of strong turmoil in the ANC and in South Africa because of this prosecution. But it is also possible that over a longer period of time political support ebbs away from the secretary-general, and that by the time he is convicted he will be a spent political force. DM