While a Daily Maverick audit of President Cyril Ramaphosa’s State of the Nation Address in 2019 reveals precious little effective progress in a year, he remains the most popular leader in SA by many miles.

Out of 20 key pledges, President Cyril Ramaphosa has made progress on only four and the two major areas of his focus, economic growth and unemployment, have worsened in the past year. Yet, new research by Ipsos shows that Ramaphosa has consistently high popularity rankings as people trust he will get it right.

He measures 62% popularity, only slightly down on the measurement of 2018 when he became president when he enjoyed the approval of 70% of South Africans. Among ANC members, he enjoys an approval rating of 82%, giving him enormous party support for his reform project.

In previous years, Daily Maverick has measured progress on the state of the nation (SONA) addresses on processes, but this year, it chose to measure by impact and completion. On those outcomes-based measures, Ramaphosa has not done well, but that may be because reform takes longer than a year and can take up to a decade to be effected. The trouble is that Ramaphosa may not have a decade in office because of the factions that lace the ANC.

Projections for growth in South Africa 2020 by the SA Reserve Bank, the International Monetary Fund (IMF) and the World Bank are all at under 1%.  Unemployment is at its highest ever levels and youth unemployment is particularly impervious to any statistical improvement although South Africa is not short of great ideas, and social entrepreneurs to fix the vexing problem. Pundits say an investment-grade downgrade to junk when Moody’s makes its decision later this year is almost certain. That will see between US$5-bn to US$8-billion leave the country, according to modelling by the SA Reserve Bank.

Yet, the reform project is struggling: While he has made important inroads in rebuilding the National Prosecuting Authority under national director Shamila Batohi, the rate of investigation and prosecution of state capture cases has been slow. Ramaphosa promulgated an NPA investigative directorate led by Hermione Cronje and she has initiated the first major state capture-led investigation into Regiments and Trillian, but the NPA seems light years away from prosecuting the political big-wigs who enabled grand corruption. 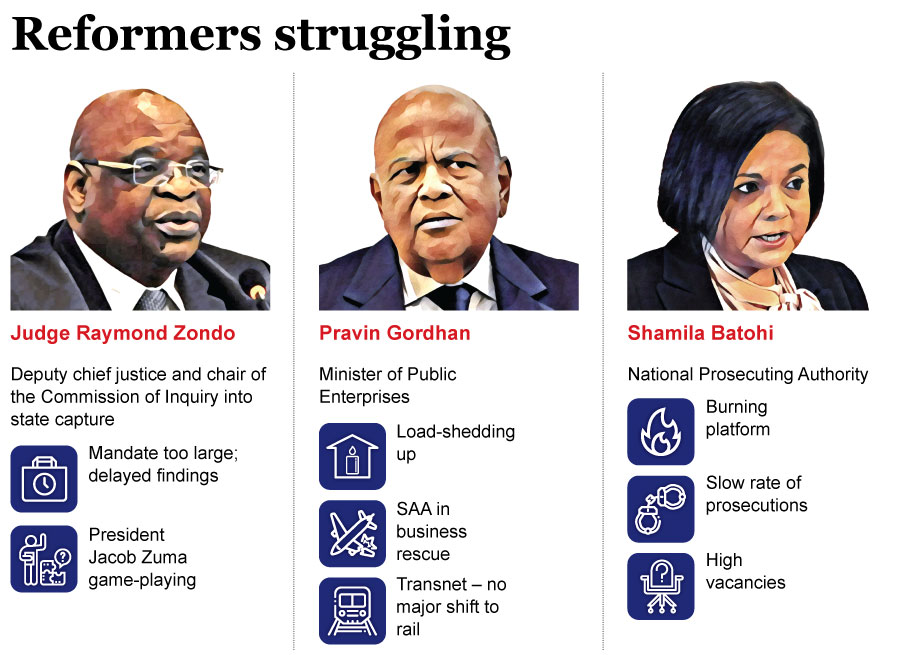 At Eskom, incoming CEO André de Ruyter is off to a galloping start, but not before the utility has racked up debts so high that they are now likely to be sovereign – that is, they threaten the country. A new deal is being inked to get the Public Investment Corporation (PIC) to take over the lion’s share of Eskom debt, but the utility has been impervious to improvement in the year under measure. Regular power cuts have become a way of life while tariffs are going up, adding to the burden of all South Africans.

Earlier this year, Ramaphosa and Business Unity SA’s president Sipho Pityana had a blistering and uncharacteristic row at a Nedlac meeting as the private sector took public its long-standing complaint that reforms are too slow. Not a single element of the economic stimulus package the president announced in September 2018 when the economy tanked to its worst levels in decades has been successful at scale.

This includes a youth employment plan, the finalisation of the land reform programme (notably expropriation without compensation), a new visa regime to allow skilled emigration and tourism, the restructuring of Eskom and the allocation of spectrum to allow for data prices to come down.

The Youth Employment Service (YES), which aims to secure internships for 2-million young people over the medium-term depends on a growing economy, but the outcomes for spectrum allocation and an e-visa system illustrate the problem. Both plans are running way behind target. A pilot e-visa project is being tested in Kenya because East Africa is a big feeder market into South Africa, and there is finally a policy paper on spectrum allocation.  But the regulator, Icasa, is a long time away from allocation. The telco industry has also said it will go to court if the spectrum auction plans are implemented as set out. 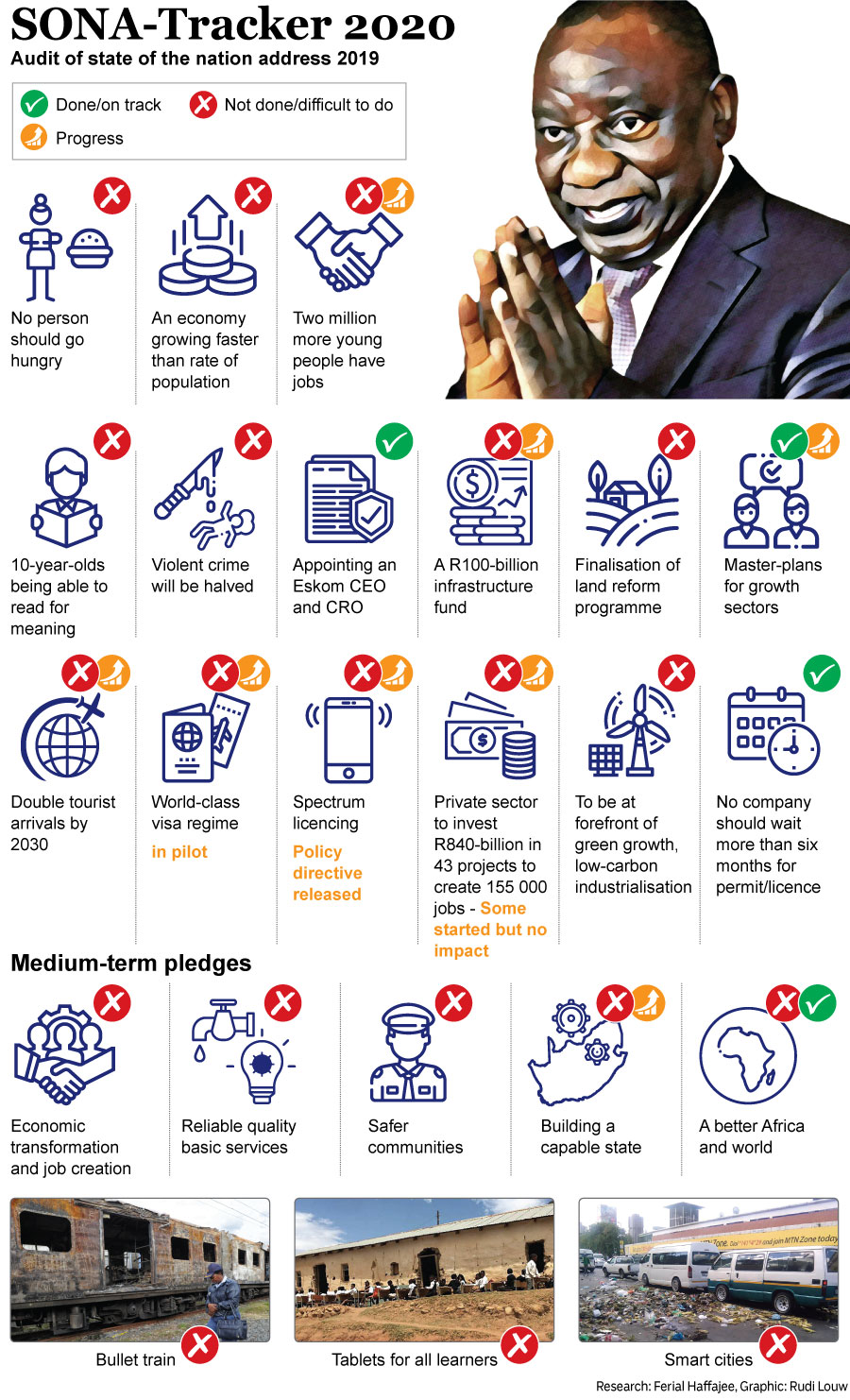 In numerous interviews, officials say Ramaphosa has made good progress in eight areas. These are on youth employment (responsibility lies in the presidency), an infrastructure fund (it has a CEO, Sean Phillips and an infrastructure official in the presidency, Kgosiento Sputla Ramakgopa), tourism, the private sector investment drive and the move toward a capable state. Officials say the reforms at the NPA and at the SA Revenue Service (SARS) are evidence of capability being restored. But all of these are process improvements (a policy paper, an appointment of a new person, a new budget to follow a political commitment), not scaled at impact.

“I’m not disappointed at the clean-up agenda,” says a leading businessperson who requested anonymity. Momentum to fix institutions including the NPA, SARS and the intelligence services had been good. “It’s unrealistic to expect big prosecutions,” he said. He is impressed by the commitment to undo capture at Eskom and Transnet.

“There is a clear agenda to roll back state capture. I cut him [Ramaphosa] some slack.” Business, he said, is looking with great interest at the recommendations that come out of the Zondo Commission of Inquiry into State Capture including the reduction of powers of the president and also clarity on the appointment of a Public Protector. “The August [2019] xenophobic attacks showed up that the police are a complete mess.  The business forums who hijack construction sites for rents reveal a [shocking] degree of lawlessness. [The] fixing of the police has not happened,” he said.

“[The president] has not managed the [business] confidence-sapping issues of expropriation without compensation and the National Health Insurance. These would be the ones people regard as a disincentive to investment,” said the businessman.  The idea that Ramaphosa should be cut slack is common and it shows up in the Ipsos research.

Just over six in 10 South Africans surveyed said Ramaphosa is doing fairly to very well and he has a 62% approval rating compared to 42% for that of deputy president David Mabuza. He is much more popular than his government, which only has an approval rating of 51% revealing that people trust Ramaphosa to pull South Africa out of its doldrums. “There’s trust in him. He’s popular. They want him to take action. They want him to get a move on. Ramaphosa has the support of the population,” says Ipsos director Mari Harris, who leads research that has just come out of the field.

“Since the election [of May 2019], his support levels have not come down. People look up to him as a stabilising person,” says Harris to explain why Ramaphosa’s ratings are so high even as those surveyed said they were very worried about unemployment, crime and corruption, all three of which have grown under his administration. 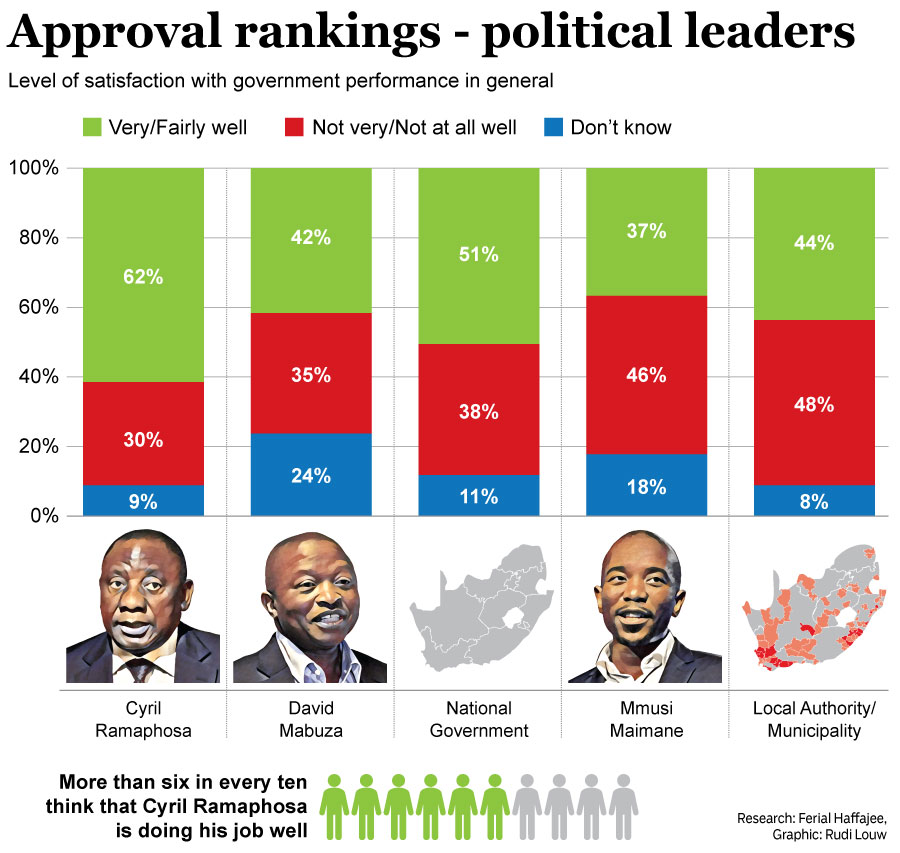 What does Ramaphosa think?

He is disappointed, but also upbeat and confident that things will turn.  There is a view that the economy tracks the commodity cycle and that SA is caught in those problems and that policy reforms can only enhance growth to some extent.

In two successive years of investment summits, Ramaphosa has bagged billions of rands in investment promises from the private sector, many of which are in motion – these investments should impact on growth and jobs over the second half of his first term.

The presidency counts as pluses the passage of regulations to end the child visa red tape, which sent tourism into a tailspin while several big feeder countries now have visa-free access.

But it has been tough to get the home affairs department to think of itself as a growth driver rather than a security department, say government officials to explain why Ramaphosa’s promises on e-visas, skills and easier tourist access has been slow.

Eskom is regarded as the Achilles Heel of the Ramaphosa presidency and it has impacted how much he was able to deliver between the SONA 2019 and the SONA 2020.

Ramaphosa’s slow and considered style is bearing fruit, say some political analysts who point out that the most recent ANC lekgotla early in February 2020 delivered far greater consensus around issues.

Cosatu, for example, had agreed to strategic equity partners at state-owned enterprises while the union federation is also at the forefront of finding a way to deal with Eskom’s debt by creating a special purpose vehicle utilising a small percentage of PIC funds. Last week, Business Day reported that Ramaphosa had attended two meetings to put flesh on the bones of the proposal. “Eskom and Sasol were built from workers’ funds. Current investment (in developmental projects), is at 2% and not the allowable 10% of funds,” says spokesperson Khusela Diko, who says consideration is being given to amending the Pensions Fund Act to boost development.

Ramaphosa is not likely to give in to the temptation to do things differently, or more quickly as he is increasingly being chided into. He trusts his own pace and believes that it is bearing fruit.

Last year, Ramaphosa got poetic and visionary about connected schools where every learner had a tablet loaded with lessons, a country of bullet trains creating a crisscrossing network of fast trains getting commuters across the country and to work, and then he floated the idea of smart cities where tech enables a good life.

He is unlikely to repeat that this year as the three ideas were so very far from the reality of ordinary South African life. It felt then like Ramaphosa had retreated into the echo chamber of power where leaders lose a sense of real life.

In the year we’ve looked at, all those ideas receded as the Passenger Rail Agency of South Africa went from bad to worse. The Khayelitsha line, for example, is out until September 2020 and trains get torched by criminal networks the cops can’t get a handle on. Mud schools and poorly equipped schools continue to pockmark the education system even as the department of education’s Asidi school-building programme racks up some success.  Across the country, the idea of smart cities seems a faraway dream as municipalities collapse – the Makhanda judgement obtained in the Eastern Cape High Court by the Unemployed Peoples’ Movement where the presiding judge ordered the province to dissolve the council is likely to tell a bigger truth of local government than the conceptualisation of the smart city.

Ramaphosa has a far higher mandate for change than the pace of his progress suggests. His success in 2020 will rest on greater speed, decisive action at Eskom, high impact prosecutions and clarity on economic reforms to kickstart his stalled economy. Will he do it? The jury’s out. DM