Corona times, and the living is easy in Umhlanga 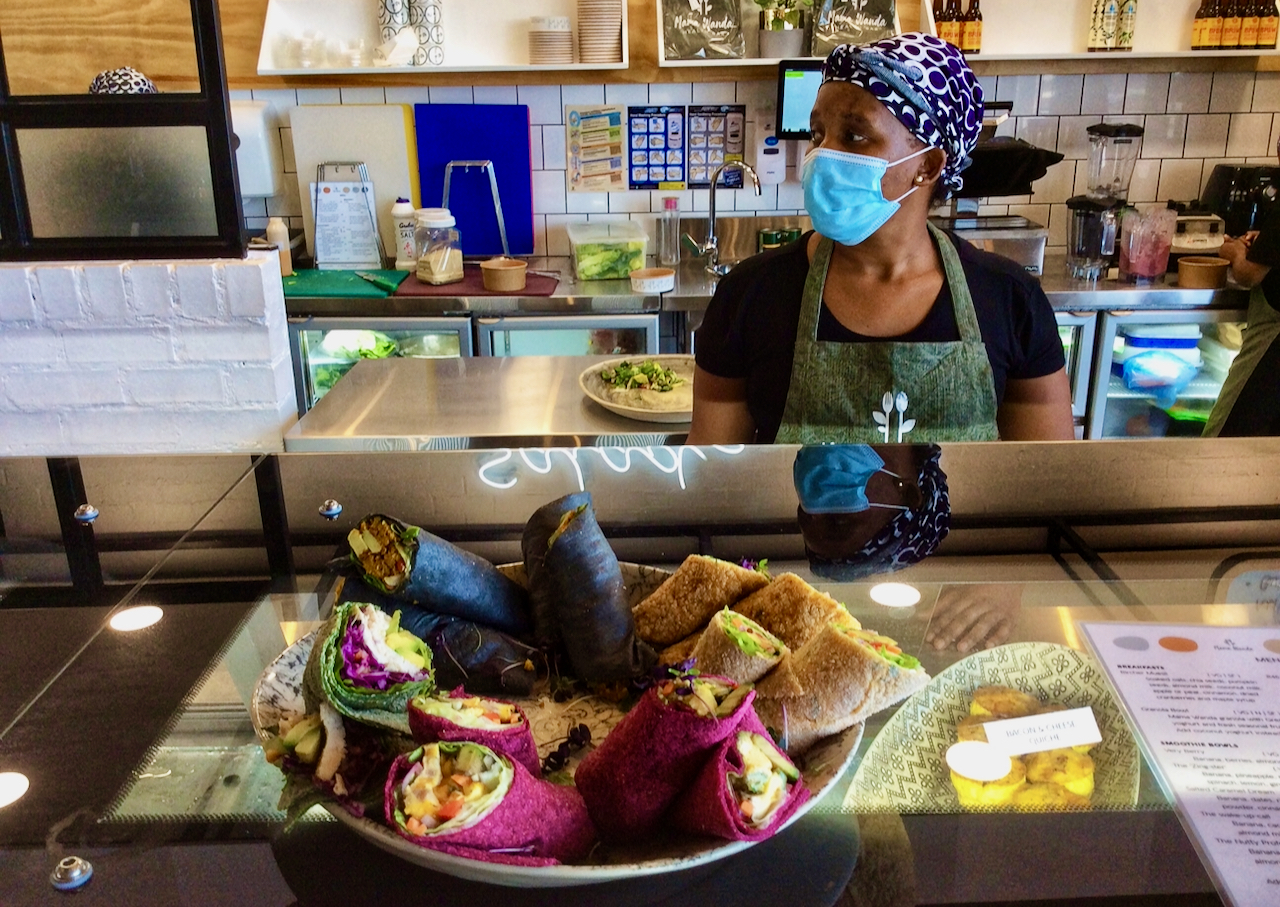 There’s a buzz going on about the new Legacy Yard food hall in Umhlanga, a world of flavour for the travel-deprived. Viva the chefs. Life in corona times is getting back its flavour.

The image grabs me first. A stylised subtropical sun-drenched scene with birds soaring between palm trees and depictions of futuristic contemporary accommodation.

Then the words stop me. “Corona: this is living.”

Okay, so a clue in case you haven’t guessed. I am at a bar and what’s grabbed my attention is an ad for what was recently named the world’s most valuable beer. This despite the fact that the name-fluke has led to a significant dip in sales and brand value.

But enough about Corona, the serve-with-a-wedge-of-lime brew.

The “this is living” tagline attached to the virus’s namesake triggers a mental switch to “This! — is living?” A question.

Which transitions to “What is my Covid life right now?”

And in turn, if you want to chew on it: What is yours?

And what about Anne, who I have come to meet for lunch at the new food hall, called Legacy Yard, at The Arch, a development-in-progress on Umhlanga’s ridge.

All things being unequal, as they typically are, Anne — my partner in culinary travel adventures in KZN and California before she retired from writing about food — should have been WhatsApping me foodie snaps from Spain at the time we were all in heavy lockdown. Which trip she’s had to postpone twice to date, with nothing on the horizon besides uncertainty.

I, meanwhile, would have WhatsApped Anne food snaps from Vietnam and Cambodia, the trip that was this year’s planned birthday-gift-to-self. Which got dumbed down to two tea infusers. Oh lucky me. For the three different types of loose tea I was given by a friend who travels regularly — make that travelled – to the UAE and thereabouts and brings (brought) back tea and sumac.

So these are corona times. And the living is: an easy culinary travel adventure to Umhlanga. Gotta remind oneself, look on the bright side.

And all things considered in this entire short-long year to date, there’s quite a bit to be excited about. It is the first time I’m seeing Anne for lunch since before lockdown; formerly a monthly happening. And with so many eateries closed, never to reopen — not to mention hospitality staff laid off — we’re meeting at a post-Covid (opened October) establishment I’ve been hearing a buzz about: a food hall of new eateries, not repurposed chains, where I learn, as I wander around and talk to purveyors, that many, if not all, were personally approached (the equivalent of headhunted) to be part of the food hall concept.

The only name that is familiar to me in the food hall — and I am happy to see it when I Google ahead of time to know what to look out for — is Momenti Gelato. It was within about a month of Ed Papaphotis having opened his first small outlet on Station Drive back in 2017 that I stumbled upon him and became a fan. He quickly moved to something bigger at the same venue, being as good at marketing, preferable to that awful word, branding, as at making ice cream.

If you live in the San Francisco Bay Area, which I did for 25 years or so, you become spoilt for choice when it comes to artisanal ice cream. Seasonal, sublime — and I want to say symphonic, thinking of the sensual waves of deliciousness the best ice creams excite. We have been getting better (more options) in this neck of the woods and Papaphotis, who went to Italy in 2016 to learn how to make his premium, small batch gelato and vegan sorbet, has been a frontrunner. Good job, whoever got him in here, and good to see that the queue lining up for his ice cream was constant.

Mama Wanda was another I made a note to definitely check out, first pulled in by our name “snap” and then by the rainbow vibrancy and visual freshness of the food. And lucky for me, Mama herself — Wanda Du Toit — had popped in for a fleeting visit. Phumla Mgenge, formerly of nearby Old Town Italy, manages the place and sorted me out with beetroot wraps with spinach and feta, bacon and cheese wraps and carrot, salmon and avo wraps for my pic.

Du Toit tells me this is her first foray into food. She is a lifestyle coach with a focus on gut health. She mentions hospitality branding and concept whizz, Renzo Scribante, a key player in the development, having suggested she extend her focus and offer the food she believes in. She took him up on the suggestion and says it is going down well.

They sell kombucha from Van Reenen and from Cape Town, salads, seasonal veggie-focused dishes and an assortment of other lines that look nothing like rabbit food — they don’t shun meat — and which Du Toit calls “real food” for “real change” and “real life”.

She points me across to The Rotisserie, offering Peruvian rotisserie chickens, which are slowly turning golden in a dazzling rotisserie oven that she tells me was imported from France by her son-in-law, Warren Blakeman, whose business it is.

Good to see, he is too busy to take a break to chat, rolling out his chicken “three ways” — full, half and quarter — and what look like super-succulent pulled chicken and coleslaw burgers.

I am tempted to try one of these. Alternatively an “African wood-smoked BBQ burger” cooked low and slow, being dished by the Super Smokehouse, which is right next door to the oh-so-artistically muralled Bachao Indian Street Foodies, which offers options “inspired by the rich cultural history, energy and vibrancy of India” — for customers keen to try something beyond “the myth of Indian food being limited to biryanis, tikkas and oily curries”. I’ve never thought that way of Indian food, but there you are. “Truly authentic menu and recipe offerings” sounds good.

I end up settling, along with Anne, for sushi made by the legendary Watchara “Roger” Siravajanakul who, when I stop at the stylish Wasabi, where he is hectically taking orders, slicing and plating, and tell him I’m meeting Anne for lunch, says he will take a break and join us and I can speak to him then.

You couldn’t hope for anyone better than Siravajanakul to make your sushi. He reels off the names of different places he’s sliced and served at since he came here from Bangkok (he’s as legendary for his Thai cuisine) in 1995. Southern Sun Elangeni (Suki Hama, Daruma); setting up the first sushi bar in the country for a Pick n Pay; erstwhile acclaimed Durban Thai restaurants; long-time 100 Hills Chef School sushi teacher; the creator of Durban favourite Green Mango, which he opened 17 years ago and his wife runs.

He too was approached by Scribante. The concept idea included oysters and champagne and Siravajanakul has an oyster tank bubbling in his kitchen.

The menu at Wasabi had to be specially designed. With the food hall concept, all orders have to be made available fast. The pace is hectic. The fish is fresh-from-the-ocean: not surprisingly bought from Bartho’s.

Listening to him talk as we sit there — jacket on and thinking no coronavirus would stand a chance in the face of this breezy arch funnel wind effect — I am reminded, as often before, how as a chef you have to have passion and be something of a bugger for punishment. Alternatively, a hero of sorts.

And lest you think you have to be blown away other than by the food and decor at the Legacy Yard… No. There is an interior that is glassed in, with views across Umhlanga to the ocean. And the Back Yard rooftop bar is similarly enclosed, offering protection as well as a view.

There are people who shun food halls. Prefer a restaurant where you can sit in one place and be served. But I love the food hall concept, whether travelling (try Warsaw’s Hala Koszyki if you’re ever in Poland, for a stunner) or when they’re closer to home.

The Food Box, which opened last year in Morningside, survived lockdown. Good for celebratory gatherings when you can grab a large table and everyone can order what they want. No messing, afterwards, with the bill is a plus.

I liked that at the Legacy Yard I could browse and choose. Perhaps another time, have a starter from Wasabi, a kombucha from Mama Wanda (which I did have), a quarter Peruvian rotisserie chicken for a main, gelato for dessert. Take croissants and bread home from Buttercup (Anne did). Ponder Corona and living and adapting to life as it is right now. Like it seems it will be for quite some time to come. Not too bad, all things considered. And meanwhile, viva all those dedicated chefs and cooks who keep us coming back for more. DM/TGIFood

Wanda Hennig is a food and travel writer based in Durban. She has worked on newspapers and magazines in South Africa and the San Francisco Bay Area and freelanced extensively. She is author of Cravings: A Zen-inspired memoir…. Reach her via her website wandahennig.com