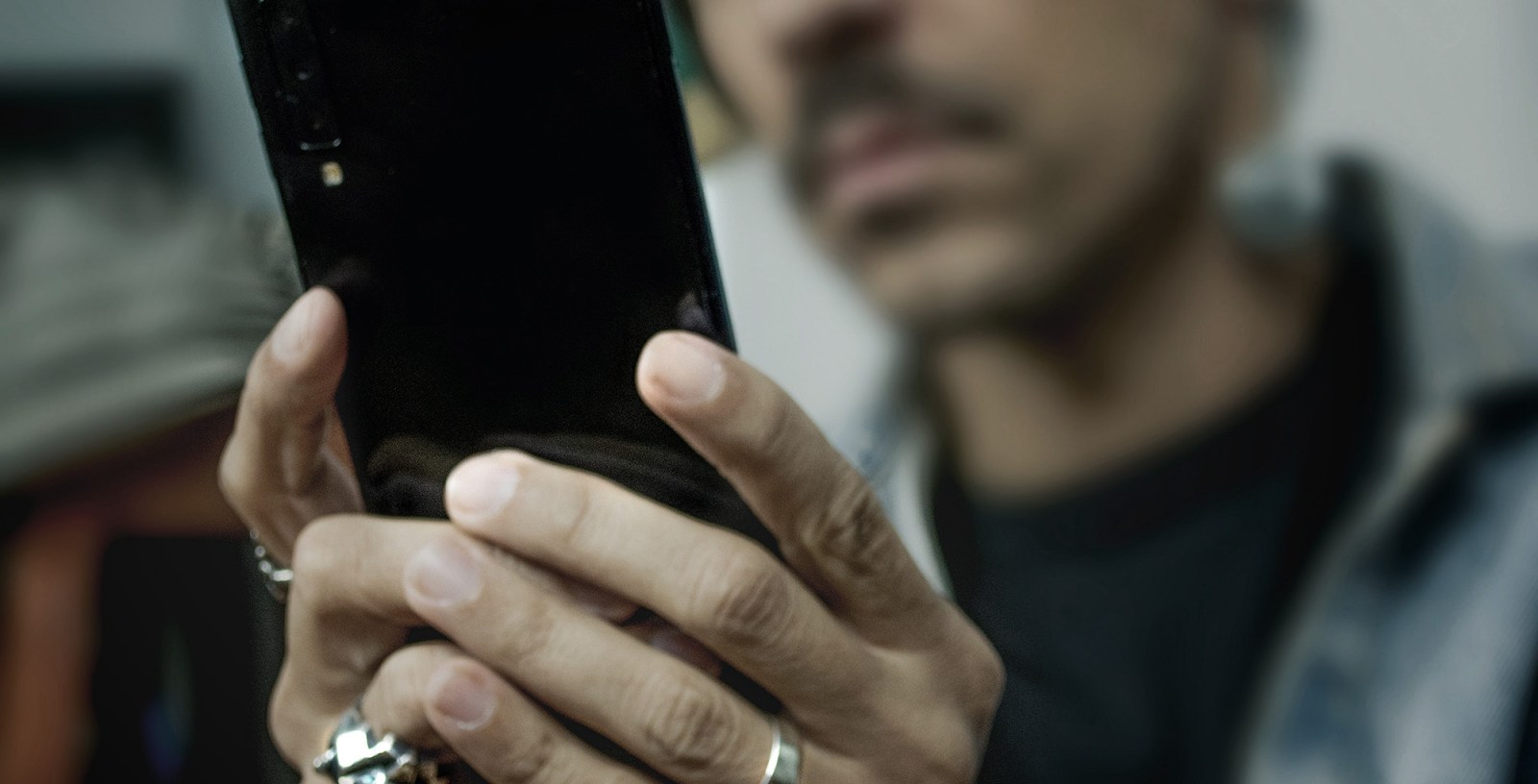 This is a summary of the trending, highest impact, and most active themes and narratives related to social cohesion and division in South African public-domain social media conversations for the week ending on 5 November 2020. 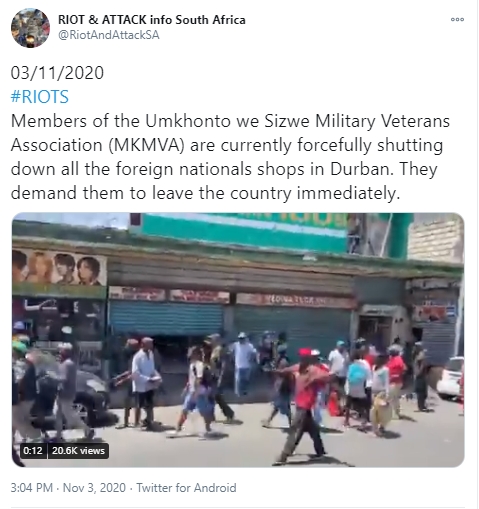 A hashtag being widely used to bash foreign nationals cropped up again, peaking on social media in the past week.

#PutSouthAfricaFirst hit the top spot last weekend after a quiet spell, with conversations slating the government and political parties for inadequate border security and unemployment.

@Citizen1stNews posted a video of the DA’s Angel Khanyile criticising the government about the lack of border security. Khanyile received many positive comments, especially from followers of the #PutSouthAfricaFirst movement. @Lorshy2 commended her for leadership, while @SegopotjeNkadi3 believed that home affairs officials who issued fraudulent South African citizenship should be charged with treason.

The movement behind the bashtag is taking aim at the ANC and the EFF. @RealPatriot102 tweeted that both parties should be voted out of Gauteng.

@Maps_pj said there were enough South Africans with driving licenses, but foreigners worked as Uber and truck drivers. @Citizen1stNews claimed the EFF was getting South Africans dismissed and securing jobs for immigrants. @Lerato_Pillay said shops owned by foreigners should be closed down. @King78190744 posted a video of the Randburg CBD, saying it was full of illegal immigrants.

On Tuesday, @RiotAndAttackSA tweeted that the MK Military Veterans Association was forcefully shutting down shops owned by foreigners in Durban, sparking a highly polarised conversation. While @mrbankssa argued that some foreigners were living in South Africa legally and shutting down their businesses was not right, @MpondoPrincesss congratulated the MKMVA for “cleaning up” Durban.

Please see previous reports on some of these accounts here and here: 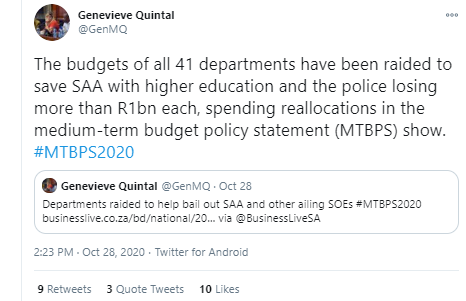 Minister of Finance Tito Mboweni’s Medium-Term Budget Policy Statement trended under the hashtag #MTBPS2020, which was mentioned over 6 600 times this week.

With the economy contracting by 7.8% and debt rising to R5.5-trillion by next year, many South Africans were angered by the government’s bailout of SAA and other ailing State-Owned Enterprises and cutting the budgets of all 41 departments.

@LegalityOB responded: “Where are our priorities as a country? To cut budgets for police and justice only to fund a bleeding entity like SAA is really mind boggling.”

Western Cape Premier @alanwinde shared an article: “Winde slams Mboweni’s blatant lies about hospitals” with the message: “We don’t need ‘chicken or beef’ in the sky – we need jobs, safety and dignity for all our people. The R10.5 billion bailout to SAA is simply wrong, when there are so many urgent, life-saving priorities to focus on and not enough money to do so.” This was retweeted almost 70 times and liked 234 times.

@realNeoM tweeted: “The #ANC have absolutely no respect for South Africans. They imposed a destructive hard lockdown for months, killed the market and jobs for millions, then pillaged the people’s money. To add insult to injury, they’re now increasing taxes and bailing out SAA, AGAIN!!!”

The NGO @equal_education tweeted: “There’s flushing money down the toilet, and then, as #MTBPS2020 showed us today, there’s taking R275 million from the education budget and transferring it for #SAA – when there are 3164 schools with plain pits as only form of ‘toilets’ #TitoHandsOffOurEducation #BuyisaImali”. This tweet generated 151 retweets and 145 likes.

Political commentator @kimheller3 tweeted: “This is outrageous…” in a post about the State Capture Commission being allocated an additional R63-million while the Public Protector’s office has been subjected to a R16-million budget cut. This tweet got 246 retweets and 334 likes. 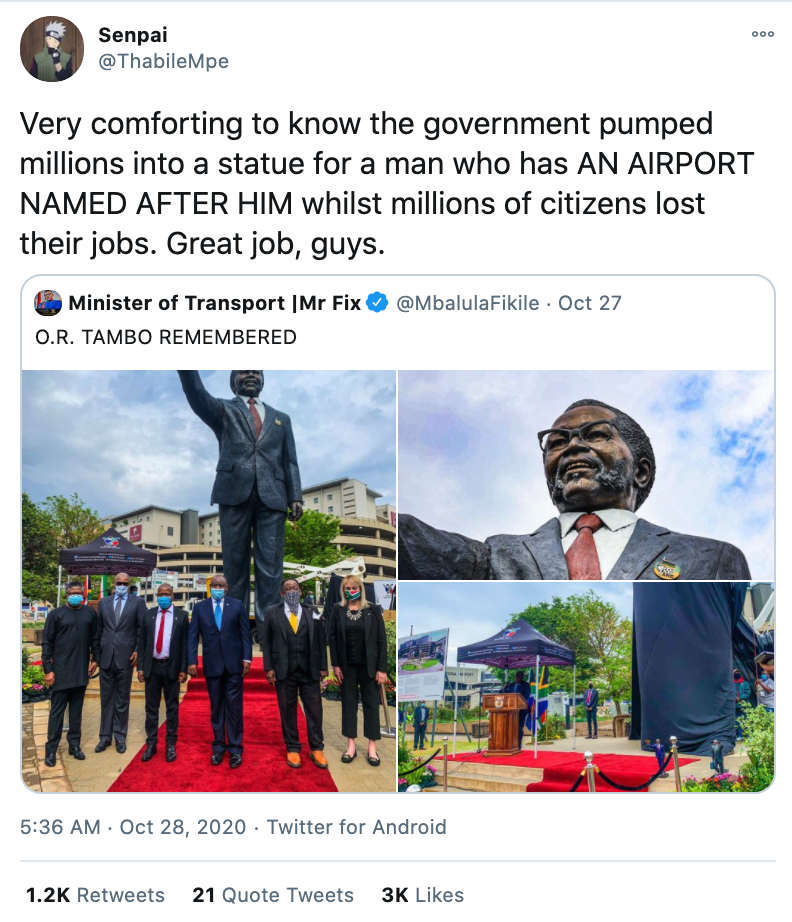 A day before the Medium-Term Budget Policy Statement, the president unveiled a R13-million statue of ANC stalwart Oliver Tambo at the OR Tambo International Airport.

“Very comforting to know the government pumped millions into a statue for a man who has AN AIRPORT NAMED AFTER HIM whilst millions of citizens lost their jobs. Great job, guys,” shared Senpai. @PapaZwane tweeted: “Spending millions on a statue during a pandemic year dripping in corruption and unemployment is exactly the kind of thing the ANC would prioritize. Right after this, we bailed out SAA with R10.5bn. Must be nice.”

“The timing of the unveiling is rather inconsiderate & unfortunate. It is a display of a total lack of empathy and a high amount of self gratification from our government. It should have been delayed. Sad, because this was probably commissioned well before Covid19” tweeted Apophis29.

EFF in black and white 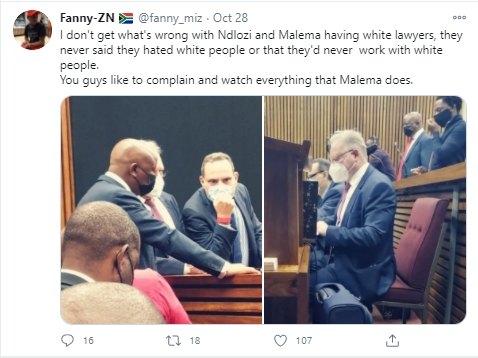 The appearance of Julius Malema and Mbuyiseni Ndlozi at the Randburg Magistrates’ Court in connection with the alleged assault of Lieutenant-Colonel Johannes Venter at the funeral of Winnie Madikizela-Mandela in 2018 raised several issues about race.

@AbongileDumako posted a video of EFF deputy president Floyd Shivambu assuring party members that Malema and Ndlozi would not face prosecution. @EFFSouthAfrica tweeted an interview of the EFF’s chairperson Veronica Mente saying: “The whole thing is influenced by racism and politics”.

While @KwaMhlanga claimed that there were many reasons for South Africans to back the EFF, @1tsYoBoi16 accused the EFF of promoting racism and social instability.

Many social media users criticised Malema for hiring a white lawyer to present his case.

@Alexand27707126 tweeted that Malema did not have faith in his black brothers and had double standards.

@AdvDali_Mpofu stated Malema did not think that all black lawyers were incompetent, its advocates were black, and that the party had lost more cases since it had started using white attorneys. DM