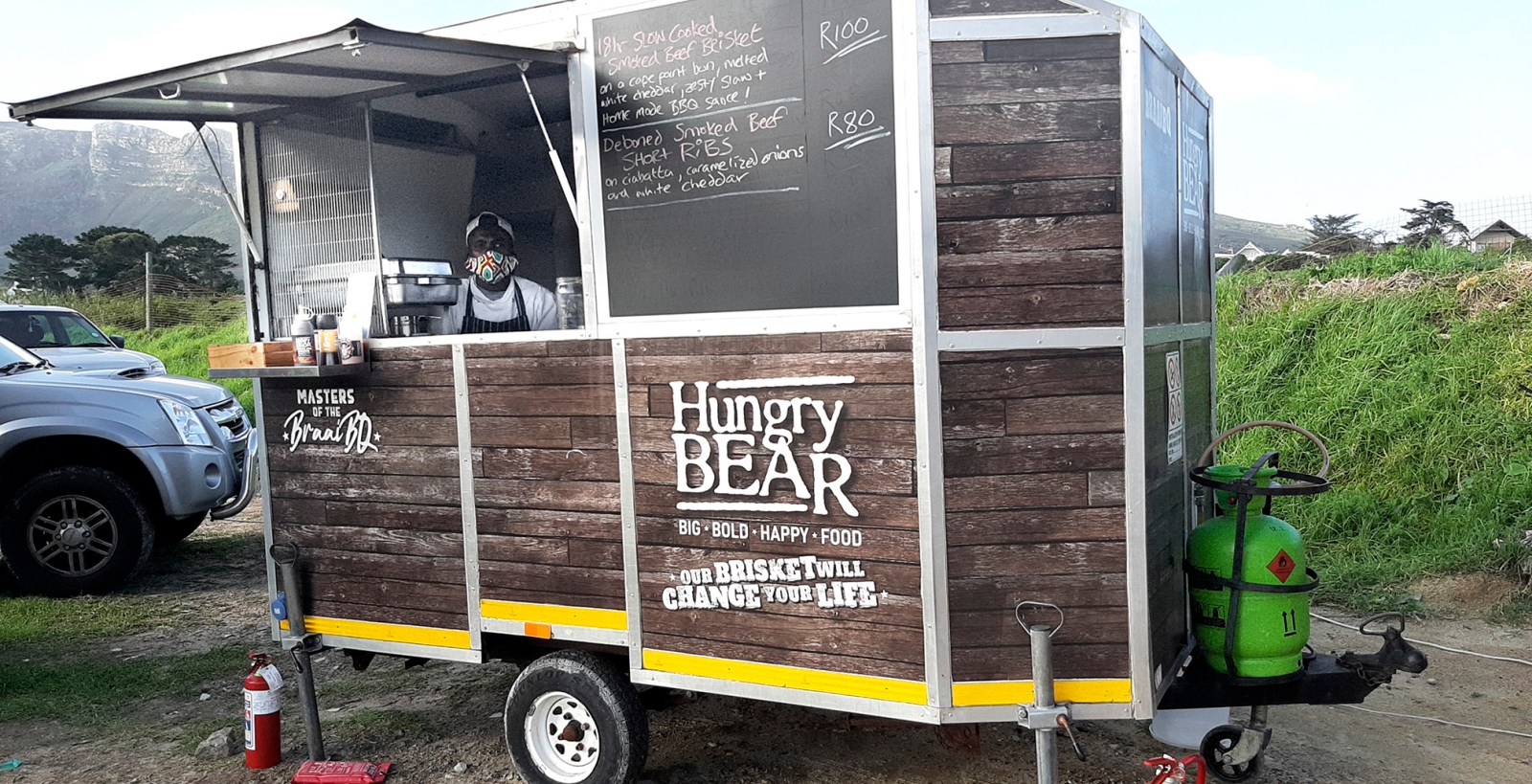 While the City of Cape Town drafts a policy governing trucks that sell food at markets and other events, entrepreneurs say they are being prevented from trading and are going out of business.

Food trucks in Cape Town are struggling to survive and it seems bureaucracy is mainly to blame.

For Arthur Brigg, owner of the Hungry Bear food truck, the decimation of the events industry during the Covid-19 lockdown resulted in a significant loss of income. Arthur is one of many entrepreneurs in Cape Town who rely on food trucks to pay their bills.

The turnover of a well-frequented food truck often matches that of a popular restaurant. Food trucks also create jobs and support local suppliers. But the sector did not qualify for any relief funding during the lockdown. Out of work for months, many owners have had to retrench their staff and find alternative streams of income.

With the easing of Covid-19 regulations, opportunities to trade have slowly increased. In some cases, property owners have offered the temporary use of their premises for food trucks to set up shop.

Social media reports an increasing number of food trucks and food truck markets closing down due to complaints from local residents. Recently, the Blakey Beans coffee truck, which had been operating at Tokai forest, was shut down, cutting off the income for the owner and the barista.

Another instance is the Noordhoek food truck drive-through, operated by Arthur and his friend Steve Meighan, who has a piece of land on which he is building a reptile rehabilitation facility.

Meighan says that given the prevailing economic circumstances, he didn’t think twice about allowing six food trucks and half a dozen stalls, employing 30 people, to set up on the land. The market picked up a following on Facebook and was frequented by customers from across the metropole.

But at the start of October, shortly after an inspection by a City of Cape Town official, Meighan was issued with a compliance notice and told to shut the market by 23 October 2020. Meighan complied.

According to the notice, which Maverick Citizen has seen, Meighan was in contravention of one of the City’s bylaws. Because the land is zoned rural, mainly for agricultural use, commercial activity is not permitted. Contravention of this bylaw is punishable by up to 20 years in prison or an R800,000 fine.

Meighan claims that before starting the market he had called someone from the City who gave him verbal permission to proceed. Apart from one noise complaint from a resident, due to a generator, which Meighan resolved, he says the local response had been positive.

Two sources suggested that resistance to the market came from local restaurant owners who feared the competition.

Marian Niewoudt, the City’s Mayco member for spatial planning and environment, said the complainant is a resident in the area, and not a business owner.

“Even though we understand and have empathy with the economic situation in which many residents and businesses find themselves, the City, in this case the regulator, cannot be selective in the enforcement of its bylaws – all are equal before the law, and we must act accordingly,” she said.

According to Niewoudt, residents say they are negatively affected by the “informal traders” and complained to the city council.

As a solution, she suggests the landowner apply for appropriate land use through the City’s development management department. The application process includes public participation, whereby property owners and residents can comment on the application.

Meighan recently learnt that the Noordhoek Ratepayers’ Association (NRPA) is opposed to the market because it does not align with their “2030 vision” for Noordhoek. However, Meighan argues that there had been a market on the land in the past without opposition, and that the 2030 vision was drawn up before Covid-19.

The economic climate warrants new approaches to economic development, Meighan says. The association has offered him the use of another piece of land for the market, but Meighan says it’s not a prime location and demand will be affected.

The NRPA does not represent the views of all the residents in the area, Meighan says. He says he asked property owners in the immediate vicinity to sign a letter of support for the market, which he says they did.

Brad Bing, chairperson of the NRPA, told Maverick Citizen they had tried to find solutions. Bing said that by moving the market to the sports field, money would flow to the Masiphumelele rugby club.

Although the NRPA reported the market to the City after allegedly receiving 30 complaints from residents, Bing maintains the association is not opposed to the idea.

He said they fully support entrepreneurship and innovation in Noordhoek, especially in this economic climate, but that the NRPA cannot condone “illegal commercial activity”. Bing denied allegations of collusion between business owners, the NRPA and the City of Cape Town.

On 20 October 2020, Steve Meighan was interviewed on Cape Talk about the issue. Sean Binder, who helps organise the Fort Food truck market in Green Point, called in to say that they too had been told at short notice to cease operations. Their food truck operators had stocked up for a busy day, leading to significant losses after the event was cancelled.

According to Richard Bosman, executive director for safety and security, the City received complaints from residents about the Green Point market and undertook an inspection along with police and health officials.

It was found that no event permit had been applied for, and no safety plan, medical officer or security protocols were in place. No liquor licence had been applied for and DJ decks had been erected without the necessary structural approval. Covid-19 mitigation measures were also unsatisfactory.

Bosman notes that the market was not shut down by the City, but by the SA National Defence Force, which owns the venue. They did this because of the lack of permits.

Lyle Masters, co-organiser of the market, said it had been “incredibly difficult” to make any progress with the City. He said the SANDF had only stepped in after the City intervened.

Regarding Covid-19 safety protocols and permits, Lyle said they had complied as they had in the past, but that the City was asking them to do things they had never had to do before.

Lyle said that, as a weekly free market and not a once-off event, he assumed a gathering of fewer than 200 people did not need a permit. In addition, the venue is across the way from a hospital, which should address health and safety concerns, he said.

Lyle noted that the market was supported by local ratepayers and that they had the same liquor licence they always used. He decried the amount of red tape they have to deal with in order to ensure that food truck operators are able to make a living.

Rob Munro, general manager of the Cape Town Food Truck Association, said that over the past two years, the association has had productive engagements with the City to ensure that food truck owners have access to viable places to trade.

The association’s mandate is to advocate for designated bays, which can be rotated among the members, resulting in an ever-changing variety of offerings for customers.

One of the challenges, according to Munro, is that food trucks are not provided for within the existing bylaws. They are either categorised as informal traders or as restaurants, neither of which apply to their business.

As Maverick Citizen has written in the past, this is a challenge to informal traders trying to apply for a permit, and demarcated trading bays are not necessarily in high-demand areas.

Munro says that for a food truck to be financially viable, it needs to be stationed at an event, shopping centre or popular tourist destination, where higher-end food is in demand.

Because food trucks are not permanent structures, they cannot be categorised as restaurants, which have a range of obligations that are not applicable to food trucks.

Financially speaking, having to pay rent or commission to trade on private land is not sustainable. On a bad day, rent paid can exceed the food truck’s profit.

According to Munro, the City has been “100% behind” the association’s proposals, although amending the bylaws understandably takes time. Munro insists the City is not the “bad guy” in this situation.

He said the onus is on the event organiser to ensure that all the permissions and paperwork relating to food trucks are in order.

Grant Twigg, Mayco member for urban development, says the City is developing a food truck policy, a draft of which should be available for discussion soon.

This policy will include 1) a workable definition of food trucks, 2) principles for economic activity, 3) an inclusive policy that enables future economic activity, 4) administrative role players and functions and 5) a quick and simple process that encourages market access. DM/MC