Cape Town: Where an informal trader gets hefty fines fo... 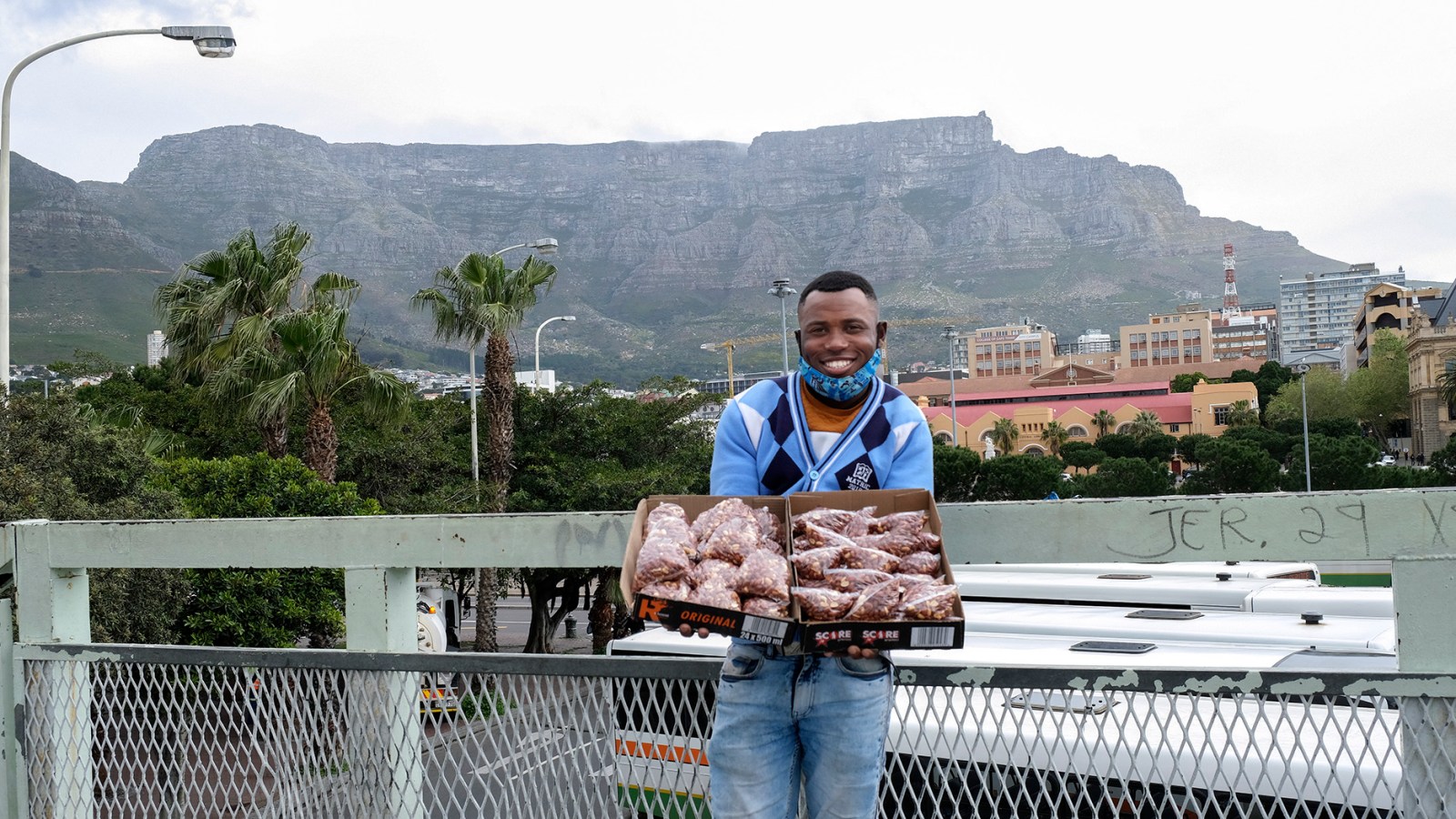 Akhona Ngqentsu dreams of his own farm in the Eastern Cape one day, and saves a percentage of his monthly profit towards that goal. (Photo: Daniel Steyn)

For two years, Akhona Ngqentsu has been selling peanuts on the footbridge over Strand Street in Cape Town’s city centre. Having failed to obtain an informal trading permit from the council, he risks exorbitant fines. The obvious solution – to apply for a permit – is hampered by a potentially unconstitutional bureaucracy that curtails entrepreneurship.

A walk through the informal trading areas around Cape Town’s main taxi rank gives one the impression of a thriving economy. In this bustling informal trading system, busy commuters have access to a wide variety of wares to choose from: fruit and vegetables, toiletries, snacks, clothes, hardware… even pirated DVDs.

But many of the vendors are trading without permits and are subjected to regular raids by the city’s law enforcement, during which their inventory is seized and fines are issued. Most of those we spoke to have tried and failed to apply for permits, deterring many from attempting the same.

According to the city’s bylaws, informal traders with permits will not necessarily be able to trade in their chosen locations, and the traders fear this will diminish their chances of running successful businesses.

Having received little communication or support from the city, many say they don’t see any real benefit in going to the trouble of applying for a permit. Some also said they suspect corruption, alleging that some permit-holders are not actually informal traders and rent out their permits to others.

One trader who has been trying to get a permit for almost two years is Akhona Ngqentsu, a budding entrepreneur who has identified the footbridge over Strand Street as a prime location for selling individually bagged peanuts at R10 a pop. He used to run a lucrative spaza shop in Nyanga, he tells us, before he got ill and lost his clientele.

Now, Akhona makes between R4,000 and R5,000 a month, a percentage of which he deposits into a savings account towards his dream of owning a farm in the Eastern Cape. But this is during the good months. The bad months are when police fine him R500 and seize his inventory (visits from law enforcement take place up to three times a week).

Having heard Akhona’s story, we decided to explore the application process from his point of view. Akhona is fluent in isiXhosa, but struggles to communicate in English. He also has limited internet access and doesn’t own a smartphone. He tells us he is not able to use a computer and can’t create his own email address.

To apply for a permit, according to the City of Cape Town’s website, traders need to register on e-services. After providing proof of identification, residency, and unemployment, traders are loaded on to the system. They are then notified when trading bays become available, for which they can then apply.

With the assistance of officials at one of the city’s area economic development offices, Akhona has followed this process in the past, but says he has not been successful in getting a permit. So we approached the city for guidance.

According to Mayco member for urban management, Grant Twigg, informal traders with limited resources or internet access can receive training and support from the city’s economic development officials. Directing us to the area economic development’s offices, Twigg also provided us with a phone number to make an appointment.

Excited at the prospect of receiving support and training to help Akhona in growing his business, we called the number… but were unable to get through to an operator or official. After several redials, we decided to visit the office ourselves during the hours Twigg suggested.

At the subcouncil building in Wale Street, we were told by the security guards that the office was closed due to Covid-19 (this was during lockdown Level 3) and that there were no computer facilities Akhona could use.

The guards gave us the number of a city official who had helped Akhona in the past. So we dialled the number. “Molo, kunjani?” (Hello, how are you?), Akhona said to the person on the line. The reply was an abrupt one: “I’m in a meeting, goodbye.”

A few days later, when the country shifted to Level 2, we went back to the subcouncil building with Akhona. Once again we were given the same phone number and told that the area economic development office is not available due to back-to-back meetings.

By this stage, we were beginning to understand why so many informal traders had given up on applying for permits.

Executive director of the Socio-Economic Rights Institute (SERI), Nomzamo Zondo, says that by fining Akhona and confiscating his inventory, the city is disrespecting the Constitution.

“The Constitutional Court and Supreme Court of Appeal have confirmed that the right to dignity is violated when people are prevented from trading when it is their only way of accessing sustenance,” says Zondo.

“The City of Cape Town has an obligation to ensure that traders in Akhona’s position have access to trading spaces and that the enforcement of informal trade bylaws is proportional and rational.”

While the fining of informal traders is in accordance with the city’s informal trading bylaw, and law enforcement cannot be accused of violating it, it’s clear that the bylaws and the enforcement thereof, through the imposition of fines, are not effective in deterring “illegal” traders. Instead, finings and prosecutions without conjunctive developmental interventions simply remove the livelihood of entrepreneurs and criminalises innocent endeavours.

We approached the city for a fresh response to our encounters with bureaucracy and were again told by Twigg that, since 2017, informal trading permits have been administered through the e-service platform, on which informal trading bays are advertised as they are made available, and are demarcated according to an approved trading plan.

“Therefore, applicants will have to apply for what is currently available, which may not necessarily be in their preferred location at times.”

There may be some rationale behind this policy, but what it definitively negates is the entrepreneur’s agency in choosing a location. In the cases of Akhona and other traders we spoke to, their trading locations were chosen based on foot traffic and demand for their wares.

The city maintains that its bylaws are in accordance with the Constitution’s right to trade and the Promotion of Administrative Justice Act, which mandates fair and effective administration of trading-related matters.

Twigg assured us that “the city strives to implement its policies and bylaws in a just manner towards all informal traders. All due processes are followed in implementing the informal trading bylaw to ensure fairness at all times”.

According to Twigg, the city has launched various development interventions to assist informal traders, entrepreneurs and small businesses. He suggested ways in which Akhona could access some of these initiatives.

Akhona is hopeful about receiving the training and support he needs to grow his business and achieve his dream of owning a farm in the Eastern Cape. Maverick Citizen will check in with him from time to time for updates on his situation. DM/MC