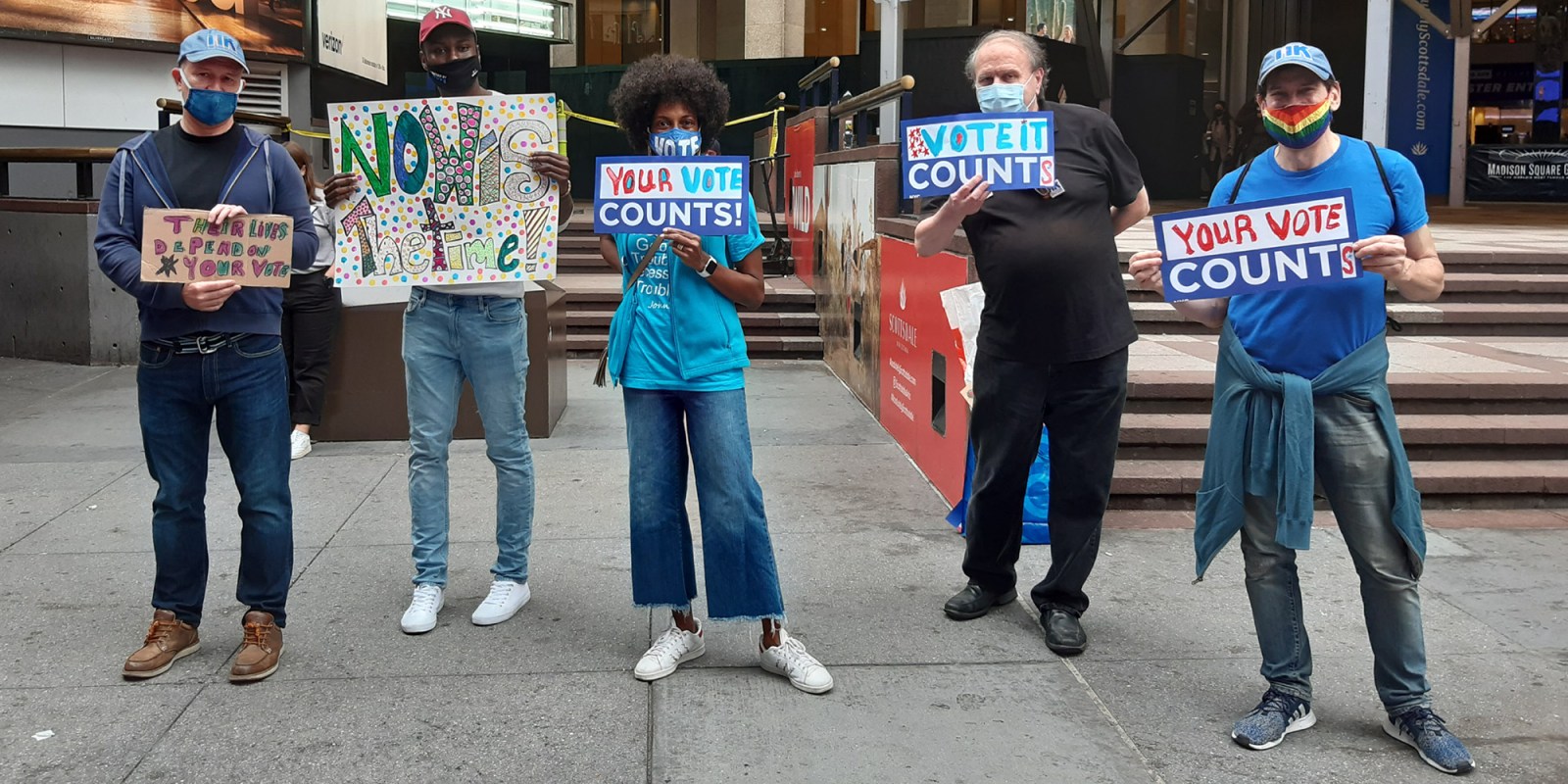 A group of people show who they voted for at Madison Square Garden, NY on Saturday 24 October as early voting opens in NY. (Photo: An Wentzel)

Despite, or possibly because of, US President Donald Trump saying New York was like a ghost town because of Covid-19 lockdowns, New Yorkers came out en masse to vote early on Saturday 24 October.

New York City was going about its business on Saturday morning and anyone expecting quiet, mournful streets would have been disappointed. But don’t expect to feel that famous pre-Covid-19 Big Apple energy as sung by Frank Sinatra – “If I can make it there, I’ll make it anywhere”.  That almost mystical energy, the sense that anything is possible, that could very vividly be felt on the streets of New York, has not quite returned and might not for a long while, if ever.

But New York is much revived since being a relative ghost town a few months back. And rumours of its demise, in the words of Mark Twain “have been greatly exaggerated” despite President Donald Trump’s “ghost town” comment during the last presidential debate of the 2020 election on Thursday 22 October.

On Saturday, masked New Yorkers were everywhere, not in their usual numbers perhaps, but they were very much present and doing what New Yorkers do on a Saturday morning – working, walking their dogs, playing in the various New York City parks. And on this Saturday, they were mostly and very determinedly engaged in voting.

Early voting in the US has been under way for a while now, with the various states each deciding their own opening dates. Voting regulations in America are determined on a state-by-state basis and there is no national regulation that dictates by when they open early voting, whether by mail or in-person voting. The Federal Government sets the date – 3 November – but the states run the elections.

Accusations of voter suppression were made in some states where there have been very few polling stations open, like Texas, or where there were issues with technology in Atlanta, Georgia. In these instances and in other cases in more rural areas, it is mostly minority voters who are affected.

Early voting opened at 10am on Saturday 24 October in New York City and from Midtown to Brooklyn, long lines of earnest and diverse mask-wearing voters waited patiently to cast their vote. Some of these voters were pubescent Americans – like the former Croatian who did not want to give his name but was happy to tell Daily Maverick that he has been living in the US for 12 years and gained his citizenship seven years ago. He cast his vote in Brooklyn at ‘Our Lady of Perpetual Help’ on 59th street.

This neighbourhood is so diverse that the signs at the voting venue were in English, Spanish and Chinese. The queue lined the large block around the cathedral, not quite as lively as the Midtown voters, but this could be due to the police vehicles parked on the corner with their lights flashing. There were some four vehicles with around eight very visible police officers watching the queue.

At Madison Square Gardens in Midtown, Manhattan, the queue was three blocks long and around towards the back of the arena. No highly visible police presence there and voters were chatting in groups, mostly social distancing, but all masked. One woman stepped out of the queue to take a picture and tell Daily Maverick that she was happy to be there to vote and had been in the queue for three hours.

But it wouldn’t be New York – and especially Madison Square Gardens – without some kind of art or performance on the street. In this case provided by a group with bright pink sashes marked “VOTE *RESIST*SING”. Performing their own version of singer Boy George’s ’80s hit “Karma Chameleon” – with a “Kamala Harris” twist and a mention of “Uncle Joe” (Biden).

#NewYork came out in numbers to #VoteEarly saturday and at #MadisonSquareGarden there was support with #broadway flair for @KamalaHarris and uncle @JoeBiden ( @BoyGeorge ) pic.twitter.com/oRMw9T4jJm

By Sunday morning almost 6-million votes had been cast. DM

An Wentzel is Night Editor, specialist reporter for Daily Maverick. She went to the USA to visit family as the pandemic struck and is currently marooned in the land of the “free”.