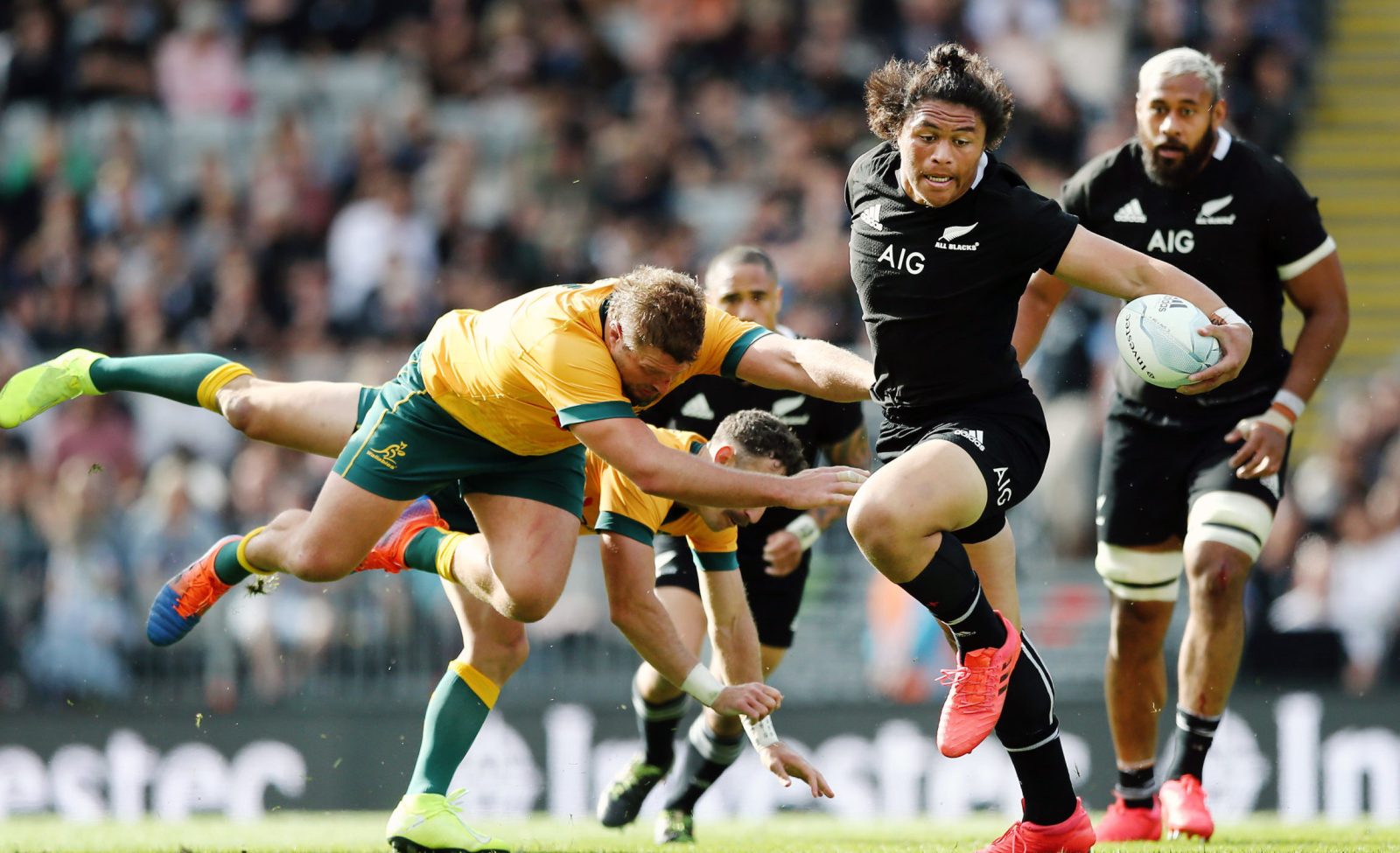 Caleb Clarke of the All Blacks breaks a tackle during the Bledisloe Cup match between the New Zealand All Blacks and the Australian Wallabies at Eden Park on October 18, 2020 in Auckland, New Zealand. (Photo by Anthony Au-Yeung/Getty Images)

The All Blacks stepped up a gear in the second Bledisloe Cup clash against Australia last weekend, which served as a timely reminder that the Springboks’ withdrawal from the Rugby Championship was the correct decision.

See here: The Springboks’ withdrawal from the Rugby Championship

Matches played on opposite sides of the world a few hours apart, showed exactly why the Springboks’ reluctance to face the All Blacks and Wallabies in the Rugby Championship next month were justified.

The Stormers’ error-strew 23-17 victory over the Lions at Newlands on Saturday evening included eight 2019 Rugby World Cup winners on the pitch. Compared to what followed in Auckland 10 hours later, the first match looked as if it was being played on beach sand.

The Super Rugby Unlocked contest had moments of quality, especially, and pleasingly from Lions fly-half Elton Jantjies, but overall it lacked the same intensity and precision.

It was a similar story between the Cheetahs and the Bulls in Bloemfontein on Friday night, won 19-17 by the home team. Of course, these were not Test matches, but the two Super Rugby Unlocked games between traditional powerhouses included a total of 26 players that have played international rugby.

These were not weak teams, yet in the early hours of Sunday morning, the intensity, physicality and speed with which the All Blacks and Wallabies played, made it look like a different sport.

The All Blacks in particular, took their game to a higher level following the previous week’s 16-16 draw against Australia in Wellington. New Zealand’s 27-7 win at Eden Park was ruthless, clinical and incomparable to anything seen on South African fields hours earlier.

Obviously a Springbok team, selected from the best South African players both at home and based in European and Japanese leagues, would be stronger. But there is no getting away from the lack of match intensity South African players have missed, and there simply isn’t a shortcut to accumulating the minimum needed 400 minutes of playing time.

Stormers coach John Dobson, ever the realist, made no excuses for a lacklustre performance. “The change room felt like a loss and we were very disappointed with our performance,” Dobson said after the match. “There is no doubt we will be better for it.

“As Siya (Kolisi) said in the change room, individually there were some really substandard performances. In five lineouts we failed to launch, whether we got the ball ripped or just lost the lineout. There was a little period in the first half when we got through some phases but, beyond that, not really. We certainly weren’t effective on attack and it’s something we have to work on.

“It felt like we hadn’t played for a very long time and maybe the other teams have got that benefit of the extra game last week.”

The below standard performances were a symptom of all the games but across the ocean, the All Blacks put the set back of drawing at home behind them.

The All Blacks continued their dominance at Eden Park, which stretches 26 years. The last time they lost at their Auckland base was against France in 1994.

Saturday’s victory over the Wallabies took their record at Eden Park since losing 23-20 to Les Blues, to 42 wins and two draws in the 44 subsequent Tests at the venue.

Furthermore, it left the Wallabies winless in New Zealand since 2001 and also on the brink of losing the Bledisloe Cup for an 18th straight year. There are two matches left in the series – both in Australia – and the Wallabies need to win both to wrestle back the Trans-Tasman Cup, which they last held in 2002.

“There is a lot of confidence in the group and we’re well aware that this Bledisloe is still alive,” Wallaby prop James Slipper told a media briefing at Auckland Airport on Monday.

“We played well in Wellington and we probably let ourselves down last night. But we’ve got two games back at home, leading off in Sydney and then Brisbane and we’re pretty excited to get back and get stuck in.

“Because there’s one thing this group wants to do, win the Bledisloe. Yes, we’ve got a lot of work to do, but we don’t feel like we’re too far away.”

The Wallabies might believe they are not far away, but the gap between the sides widened between Wellington and Auckland. The All Blacks are only likely to improve, and as it stands snow, they are already 20 points better than the Wallabies.

New Zealand’s record in Australia is also impressive. In 28 Tests in Australia since 2002, when the Wallabies last won the Bledisloe, the All Blacks have won 17, with only nine defeats and two draws.

Australia have not beaten the All Blacks twice in a row in the same year since 2001. And that is something they will have to do, in order to win the Bledisloe Cup. DM