Young activists speak on climate crisis and the impact on education 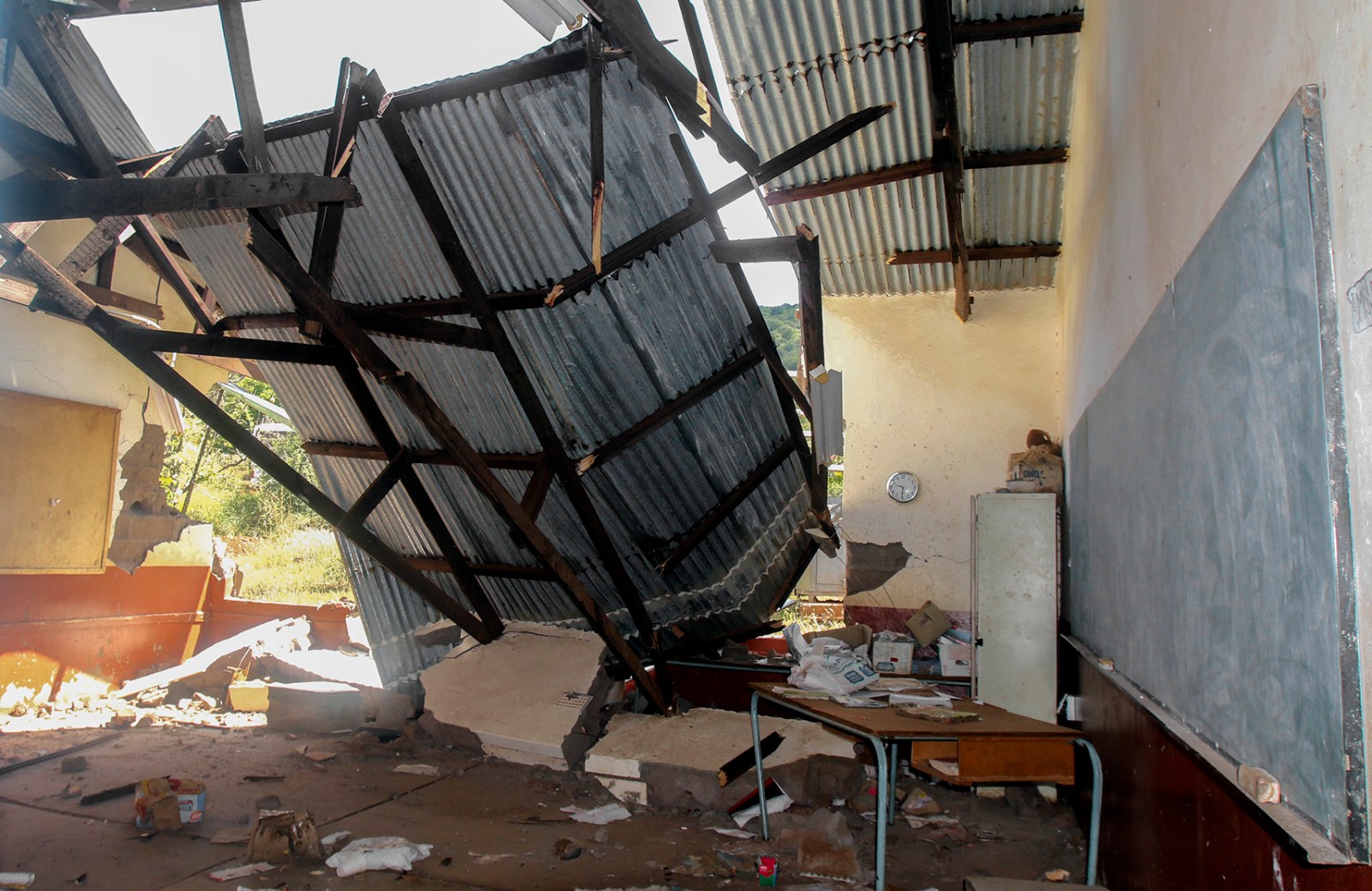 A destroyed roof at Mohloping Primary School in Motloulela village near Burgersfort in Limpopo on 17 January 2018. Schooling could not take place after the roof of the building was blown off by strong winds. (Photo by Gallo Images / Sowetan / Antonio Muchave)

In recent months and years, because of the climate crisis, South Africa has experienced unprecedented weather conditions – prolonged droughts, extreme heat waves and flash floods. The vulnerability of the country’s education system to extreme weather conditions is a major concern.

South Africa’s education system is crippled by poor infrastructure in schools. The Department of Basic Education has been brought to task over the issue several times, but it continues to lag behind deadlines to resolve structural inequalities. The work of civil society organisations on the norms and standards for schools revealed that there are still many schools, particularly in remote areas, that continue to operate in infrastructures that are inadequate, dilapidated or made with low-cost materials that are susceptible to the elements.

One such school is Makangwane Secondary School, which was represented by SECTION27 in a case against the state in 2018. Following years of failure to maintain the school infrastructure by the department, the roof of the school was blown off by wind, and teaching and learning had to take place under a tree. The court ordered that the department provide the school with temporary mobile classrooms while devising a plan for a more permanent solution. To date, Makangwane learners are still being taught in mobile classrooms without electricity.

There are many other schools operating from mobile classrooms made from materials such as prefabricated sheeting. These temporary structures are not optimal for teaching and learning and are highly vulnerable to extreme weather.

Outside the classrooms, extreme weather conditions increasingly make it difficult for learners to reach schools physically. One example is Xhora Mouth in the Eastern Cape, where learners must cross treacherous rivers which become more dangerous during unseasonal and heavy rainstorms.

It is glaringly apparent that our education system is underprepared and under-resourced to weather this global storm. In the face of the worldwide climate emergency, there are no contingency plans for learners.

The other global emergency, Covid-19, has demonstrated just how unprepared our education system is for disasters. Poor communication and inadequate planning characterised the Department of Basic Education’s dismal response to the pandemic. More than 9.6 million learners went without daily meals during school closures, and early childhood development centres were overlooked.

Disproportionate access to the internet, cellphones and computers, which are necessary for remote learning, enabled some learners from privileged households to learn from home while learners from poorer households were unable to do so.

It is no surprise that young people around the world are speaking truth to power and taking their future seriously, as demonstrated by the spate of global climate strikes by learners calling for “Climate Justice Now!”.

With young people speaking up and rightly centring themselves in climate action discourse, SECTION27 talked with three young climate activists on Episode 4 of the newly launched Climate Justice Coalition Podcast, Just Us and the Climate about the intersections between the right to education and the climate crisis.

The activists, Raeesah Noor Mahomed from Parktown High School for Girls, Awande Duma, a member of the South African Youth Climate Change Forum, and Liyema Saliwa from Equal Education, expressed their concerns about the climate crisis and the need for climate justice. They spoke about the South African school curriculum and expressed their frustrations with those in power and their inaction on climate change.

Raeesah said: “It’s unfair that instead of getting on with school and worrying about what other teenagers are busy with, kids now have to be the ones caring for the environment and about the climate crisis because adults who have the explicit responsibility of taking care of environmental affairs, including the minister of environment, are not dedicated to climate justice.”

The panellists noted that there was insufficient emphasis in schools’ curricula on the need for climate justice and what the climate crisis will mean in the South African context.

Raeesah said it is problematic that the syllabus doesn’t deal with the systemic effects of apartheid and, by consequence, the injustices which are exacerbated by climate change. She used the example of the apartheid laws in the former Transkei, which determined that black people could only settle on arid and undesirable land. She felt that climate justice is about rectifying the injustices stemming from South Africa’s colonial past and ensuring that climate change does not disproportionately affect historically marginalised communities.

The climate crisis is an existential crisis which threatens to render all social justice struggles, including the right to education, redundant. Young activists recognise this and are marching, rallying and advocating for climate justice by using their voices in all the spaces they occupy to call on governments and policymakers to act. However, while young people are stepping up to contend with the climate crisis, they recognise that our governments and the policies they enact are the most consequential in the fight. DM/MC

Boitumelo Masipa is a communications officer at SECTION27. Motheo Brodie and Mbali Baduza are legal researchers at SECTION27.

Young activists speak on climate crisis and the impact on education