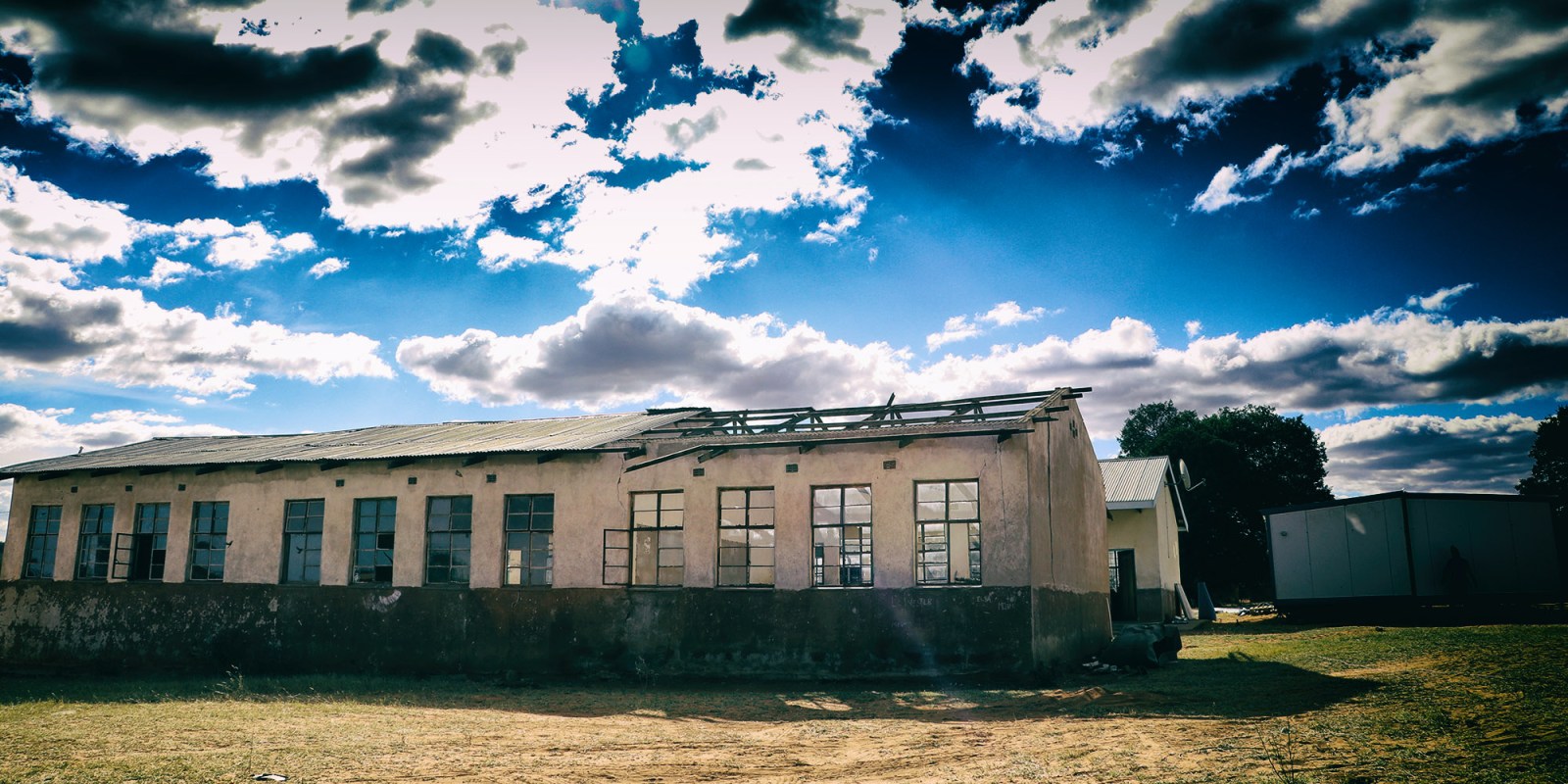 Makangwane Secondary School classroom block where the roof blew off in 2018. (Photo: supplied)

After intervention by SECTION27 to secure mobile classrooms for a secondary school in Limpopo where learners were being taught under a tree, the matric pass rate rose from 9.1% in 2018 to 100% in 2019. The lesson: Dignity is a determinant of quality education. Constitutional activism delivers results.

Every year when the matric results are released, our newspapers are filled with heartwarming stories of learners from underprivileged backgrounds who triumph against the odds. As much as we all love these stories, these learners are the exception and not the norm.

The majority of learners are part of a dysfunctional public school system. These learners attend under-resourced schools that produce poor educational outcomes with little more than basic skills in literacy and numeracy. While the class of 2019 pass rate is 81.3 percent, several experts argue this is not a full reflection of our public education system.

Rather than pat ourselves on the back for the few outstanding exceptions that make it through the system, we must instead focus our efforts on fixing this dysfunctional system so that each and every learner can progress to higher education and/or to decent jobs.

The underlying causes of dysfunctionality are manifold and complex and while education researchers concur that the overwhelming contributor to poor educational outcomes is poverty and inequality, identifying the best interventions to address these outcomes is the subject of debate. Ultimately, fixing the system requires a multi-pronged approach.

The case study of Makangwane Secondary School, however, illustrates that when we treat our poorest learners with dignity and when we ensure that even the most basic resources for teaching and learning are made available, educational outcomes can improve. It is as simple as that.

Makangwane Secondary is a public school in a remote village in Limpopo. The school was built by community members in 1974, owing to the then apartheid government’s disinterest in the community’s education. Since then, due to the ongoing lack of government support for the maintenance of the school, there has been a persistent downward spiral in school infrastructure, resulting in its existing in a state of total dilapidation. Parents and community members spent the better part of the last decade appealing to education authorities to remedy the unsafe conditions at the school, without any success.

This poor state of the school infrastructure came to a head in January 2018 when the corrugated iron roof of one of the classrooms blew off during school break time, nearly injuring learners. Following this incident, the School Governing Body (SGB) and community members decided to move the learners out of the classrooms to learn under surrounding trees due to concerns for their safety. Education authorities then suspended teaching and learning at the school completely.

Frustrated by the lack of response from the education department, the Makangwane Secondary SGB approached the public interest organisation SECTION27 for assistance. SECTION27, in turn, approached the courts for relief in June 2018.

In an affidavit, a learner describes the impact of the poor infrastructure on learning conditions and, ultimately, on his academic performance.

“The roof did not have a ceiling and the corrugated iron had spaces between the sheets. The floor of the classrooms had cracks and holes in the floor. When it rains, not only does the roof leak, it gets too loud to hear the teacher teaching. It is very distracting and after the roof collapsed, sometimes we are sent home if the rain is too much.”

He goes on to say:

“I went to a career fair in Bochum and met other matriculants in our district. I found it very hard to keep up with them. When I had to answer questions about where I am in my studies, I found it hard to articulate. It felt as though my peers were laughing at me. My confidence academically is very low. I want an education and at the moment I am not getting one.”

After SECTION27 took the matter to court. The Polokwane High Court has on two separate occasions found in favour of the SGB.

In the first court order, the court held that in the short term, the government must deliver five mobile classrooms with the appropriate amount of desks and chairs to the school as well as institute a catch-up plan to enable teachers to complete the curriculum. This was delivered in July 2018.

In the long term, the government is required to produce a fully costed plan that would permanently deal with the plight of the school. This plan must be compiled through meaningful engagement with the local community.

In a second lengthier judgment, the court in the case of Makangwane Secondary School v the MEC of the Limpopo Department of Education held that the persistent failure by the Limpopo Department of Education to fix the dilapidated, dangerous infrastructure at the school violated the rights to dignity, equality and basic education of learners at the school.

The judgment lamented that:

“It is hard to believe that a self-respecting child, who is expected to take a bath and wear [a] clean uniform, will be made to bear with learning in these dilapidated classes. The fact that Makangwane is a no-fee school is in itself an indication that it serves a poor community. One can infer that some of the children live in houses that are not up to standard. The extension of their conditions of learning to an educational facility, by a government institution for that matter, cannot be condoned. There can be no doubt that the learners at the school will never feel honoured and respected [like] learners from well-equipped schools. I therefore agree with counsel for the applicant’s contention that the structures in which learners learn, the way in which children are taught and their sense of safety and well-being all have a great impact on dignity and self-worth.” (Writer’s emphasis.)

The court then declared that the department’s failure for more than a decade to take swift appropriate action to address the unsafe conditions at the school and to provide adequate infrastructure and school furniture to the school was unconstitutional and unlawful.

While SECTION27 and the SGB are still in the process of negotiating a more long-term solution for the school with the department, the improvement in conditions in the form of mobile classrooms that protect learners from the elements and enable them to attend school, come rain or shine, as well as the provision of desks and chairs, appear to have contributed to a dramatic turnaround in the matric results at the school.

In 2016 only 28% of Grade 12 learners passed the matric examination; in 2017 this increased to 33.3%; in 2018 when the learning and teaching was disrupted and the SGB was forced to take the department to court, the pass rate dropped to 9.1 percent.

But in 2019 Makangwane Secondary boasted a 100% matric pass rate.

While we cannot say conclusively that this was due solely to the court orders and while the pass rate may have been influenced by other factors such as “matric camps”, the turnaround is significant and worthy of mention.

The lesson in the story of Makangwane Secondary is that ongoing activism and engagement of an involved parent community and the improvement of teaching and learning conditions at the school can improve educational outcomes. We need to do more of this so that success is the rule and not the exception. MC

Faranaaz Veriava is Head of the Education Rights Programme at the public interest organisation, SECTION27. She is also the author of Realising the Right to Education – The Role of the Court and Civil Society which was published in 2019.