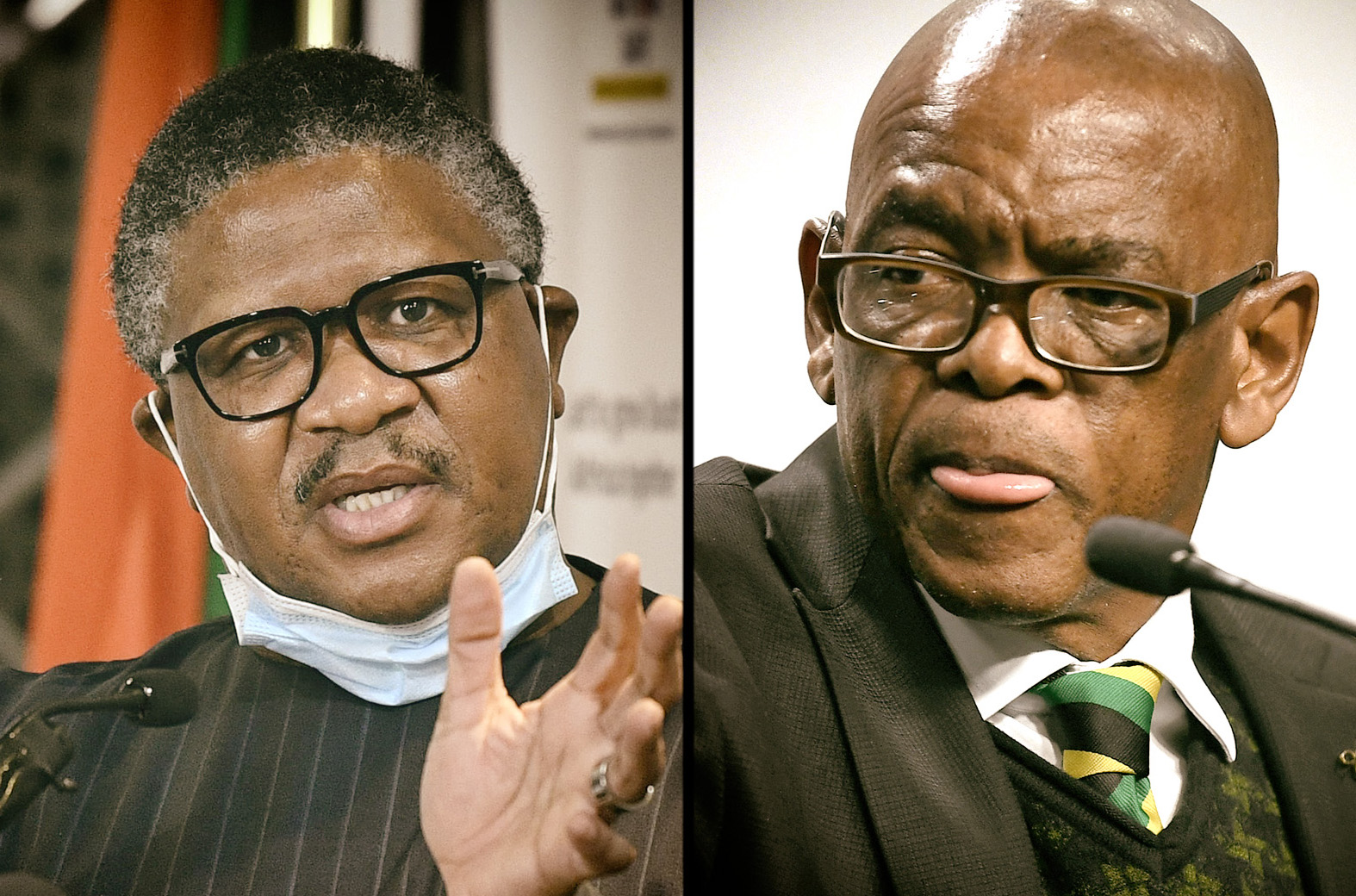 The fetid mud of the ANC’s internal fighting has spilt once more into the public domain – and this time it’s Transport Minister Fikile Mbalula doing the flinging.

It is usually surprising to see people in the same political party referring to each other as “thugs”, though not entirely unexpected to those following the latter-day ANC.

Mbalula’s comments could be seen as another flicker of the light being shone on Secretary-General Ace Magashule’s possible arrest, as well as his continuing frustration with the party secretary-general and his close allies, people like MKMVA spokesperson Carl Niehaus and its president, Kebby Maphatsoe. And it appears that Magashule is powerless to stop Mbalula’s barrage.

Even by the standards of the ANC’s recent Twitter wars, Mbalula’s comments about Magashule and Niehaus were insulting.

The context was a call by the MKMVA in Gauteng for Mbalula to be arrested, supposedly because as transport minister he should face responsibility for the poor state of the railways in that province. While that was the claim on the face of it, it may also be because of the recent past of the Passenger Rail Agency of SA (Prasa), and the long-term and widespread looting within it that predated Mbalula.

Those thugs calling themselves Mk .

Karl Niehaus is a well known thug emplyed by Magashule at luthuli house.

It got worse from there:

Kebby maphatsoe ran away from the camps that is why he’s got one hand,He lost his hand from cowardice not in a fight against apartheid. COWARD

Then came another attack on Niehaus:

In the middle of this was another tweet, which has now been deleted by Mbalula. In that tweet he said:

“I’m not afraid of them; Jacob Zuma, Carl Niehaus, Kebby Maphatsoe, Busisiwe Mkhwebane, and Ace Magashule. That you must know.”

For his part, Niehaus replied, saying:

Minister @MbalulaFikile the day you are an @MYANC veteran of 42 years, who served 10 years as a political prisoner for my membership of the #ANC & #MK you can dare to talk to me in this tone. You’re not worthy to walk in the old shoes of those MK cadres that you insulted.

Mbalula has a history of direct and personal language. But even for him, this was unusually direct and unpolished. The implications and what they reveal about his reading of the political landscape are suggestive of the shifting sandscape in the party.

His deleted tweet perhaps sums up his assessment: that he is happy to take on the secretary-general directly.

But he also appears to go further than anyone else in the ANC’s National Executive Committee (NEC) – with the exception of Public Enterprises Minister Pravin Gordhan – in claiming that the Public Protector, Busisiwe Mkhwebane, is playing a political role. Mkhwebane has made a finding against Mbalula, about a holiday he took in 2016 (to Dubai…) that was paid for by a man involved in the sports industry at a time when Mbalula was the minister of sport. So far, he has not received any punishment or been held accountable in any way, other than having the finding against him being made public.

Then there are his comments about Magashule.

In “normal” times, it would be political suicide for any minister to go against the secretary-general of the governing party. Even when tension in the party was high during the time of Gwede Mantashe as the secretary-general, it was unthinkable for an ANC member to take him on in this way. The fact that Mbalula feels that he can (or must) do this in public suggests he is not concerned about a detrimental effect on his career.

It would appear, in fact, that he is rather unconcerned.

Mbalula has recent history, which shows he is probably right.

In 2017, ahead of the ANC’s Nasrec conference, Mbalula famously tweeted his concerns that Magashule could become the secretary-general, saying: “Ace Magashule is a definite no no no, the man will finish what is remaining of our movement. He will kill it.” That comment did not stop Mbalula from being elected to the NEC of the ANC six months later. The delegates who voted in that NEC election also voted for Magashule to be the secretary-general (only just).

Then, during last year’s elections, Mbalula showed his contempt for Magashule again.

At the election Results Operations Centre in the hours after voting finished, Mbalula claimed that the ANC was winning because of the role played by Ramaphosa. The following morning, Magashule said that this was not the case, that it was because “of the party, not the individual”. Then Mbalula did a studio tour telling everyone that “Magashule must not be allergic about Ramaphosa”. Towards the end of the second day of vote-counting, Magashule appeared before an SABC television camera to publicly repudiate his earlier claim and to discuss the importance of Ramaphosa in the ANC’s election victory.

In a strange moment, Mbalula and now Justice Minister Ronald Lamola came to watch him do the interview, presumably to make sure Magashule said what he had been ordered to say.

Despite that, Mbalula was appointed as transport minister in the days after the election.

This suggests that Mbalula has nothing to fear from Magashule. Instead, he may feel (especially amid rumblings of a Cabinet reshuffle) that his political future will be better if he publicly attacks the secretary-general.

Mbalula has also brought in the figure of Niehaus. His comments about Niehaus’s past are a reminder that someone with a rich track record of lying and cheating was hired by Magashule to work on his team. Niehaus was fired as a spokesperson in 2009, but was deemed good enough to be rehired to a crucial position in the ANC.

Why would someone employ a known liar and cheat? It can only be because they need that person to lie and cheat for them.

It is important to remember that Mbalula once campaigned for Jacob Zuma to be leader of the ANC and then president, and that he abandoned Julius Malema when Malema was hounded out of the party for his multiple rule-breaking moves. Mbalula changed his tune through the years that followed, away from Zuma. He is certainly aware of the dynamics in the party, which makes him a useful bellwether.

It is unlikely that any formal action will be taken against Mbalula for his attacks on Magashule and Co. That could embolden many others to follow suit.

Mbalula can clearly see a storm on the horizon. Perhaps now it is only a matter of time before it arrives with full force. DM